International Day of Peace. Letters of young residents of Donbass sent to the sky 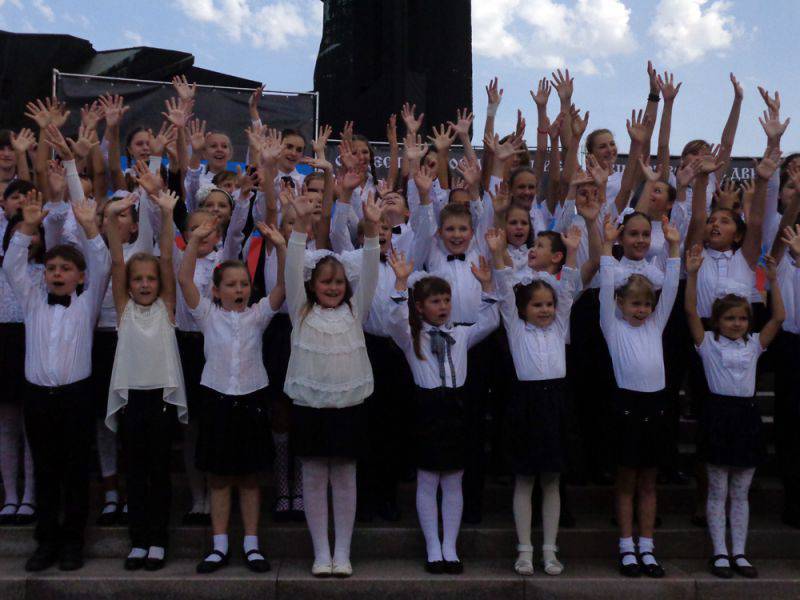 In 1981, the UN General Assembly established the International Day of Peace. In 2001, the General Assembly decided that 21 September will be celebrated as the day of the cease-fire and non-violence throughout the world. However, it cannot be said that this rule is observed by all parties. So the Donetsk residents living on the outskirts reported on this day about the continuing shelling. According to the Deputy Commander of the Corps of the Ministry of Defense of the DPR, Eduard Basurin, the Ukrainian side, one day before September 21, committed seven violations of the ceasefire. Spartak village and the district of Donetsk Trudovskiy were subjected to mortar attacks. 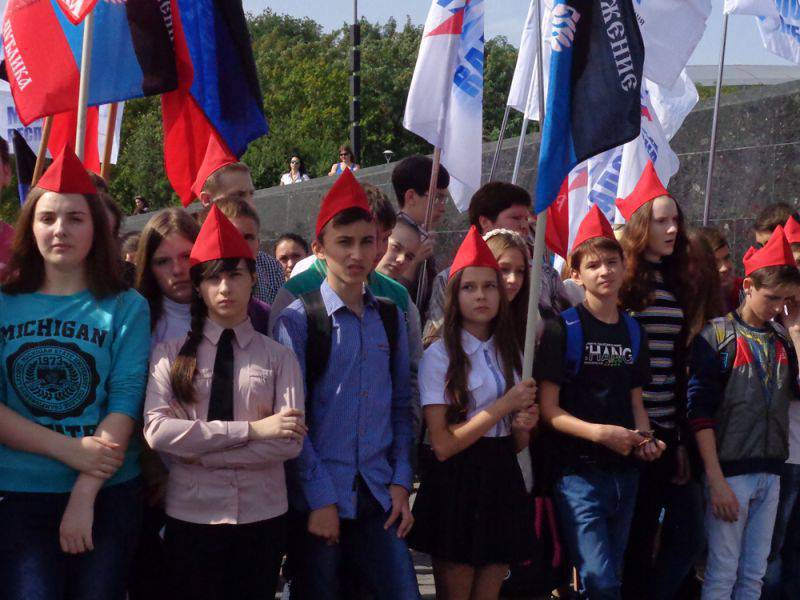 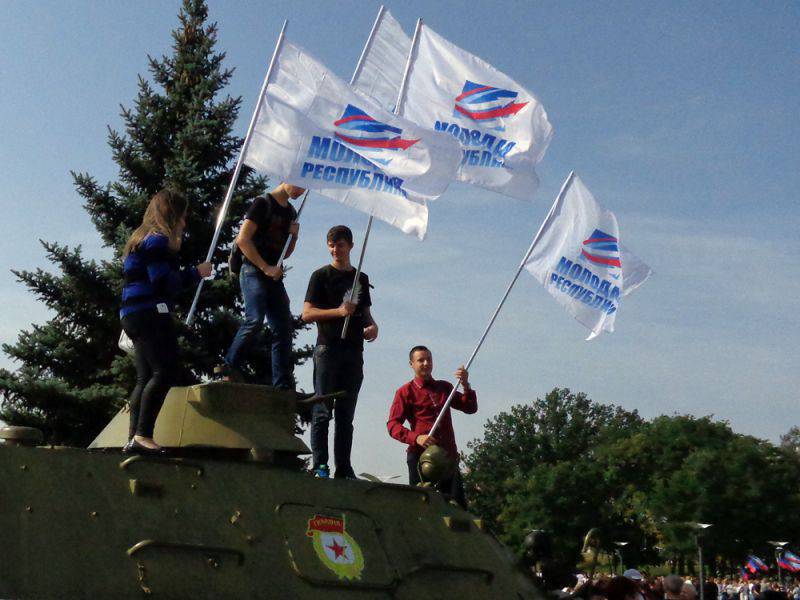 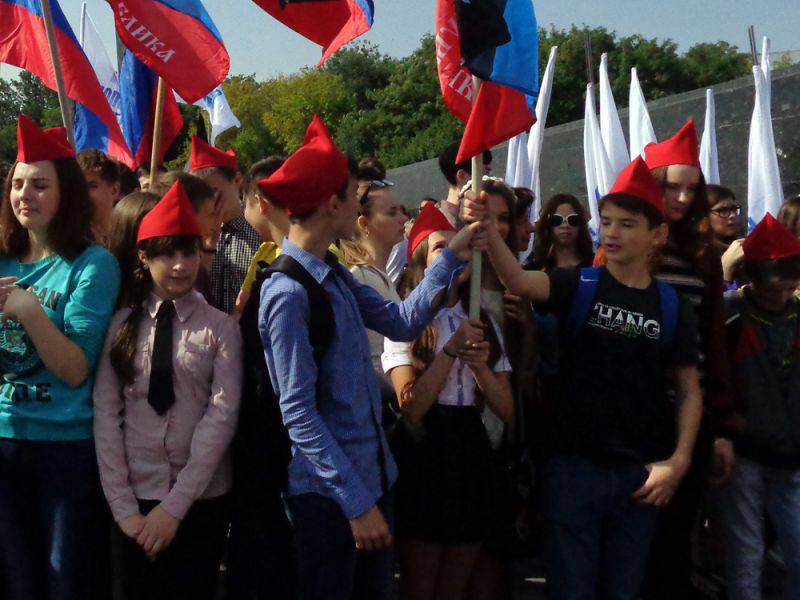 When the new school year began for the schoolchildren of Donbas 1 in September, they had a “peace lesson”. On it, the guys wrote letters of appeal to the heads of state. Now some of these messages were tied to balloons. 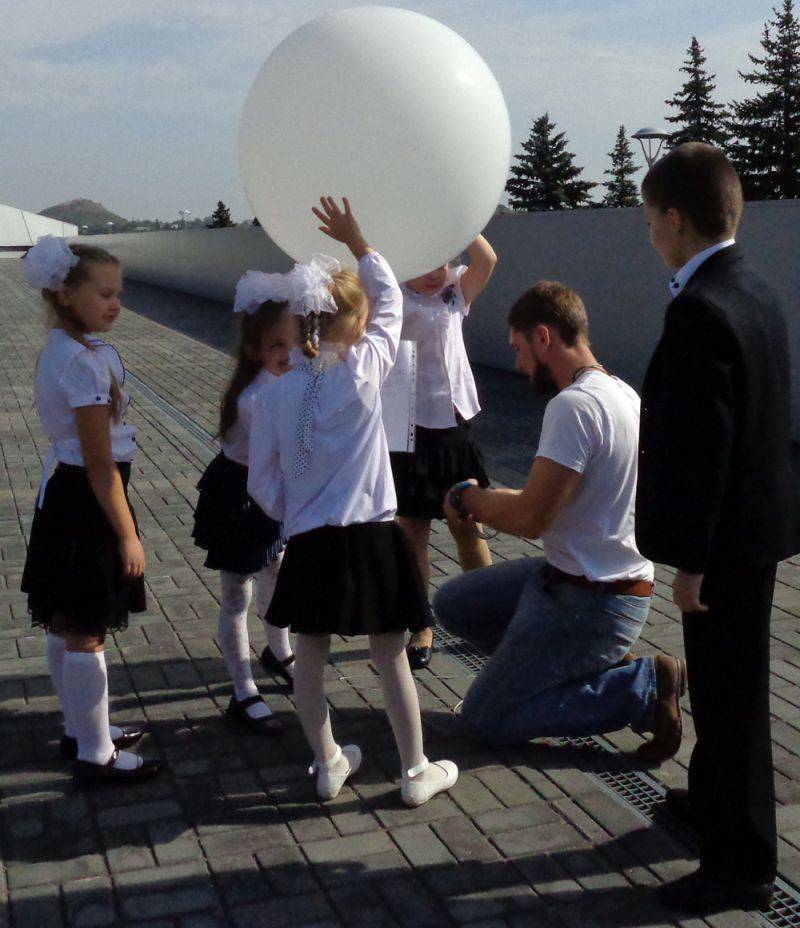 Addressing the audience, the first deputy head of the executive committee of the Donetsk Republic movement, Alexei Muratov, congratulated everyone on the International Day of Peace: “This holiday was established by the UN General Assembly to promote the ideals of peace among nations and states. But today we have a war for over a year. People who yesterday lived in the world as one family — today they kill each other. Today, the children of Donbass, like no other, know what the horrors of war are. That is why on September 1 in the world lesson the children wrote appeals to the leaders of the world asking them to stop the wars. Today we will launch these letters with the hope that we will be heard, that the wars will stop. Peace to the world. ” 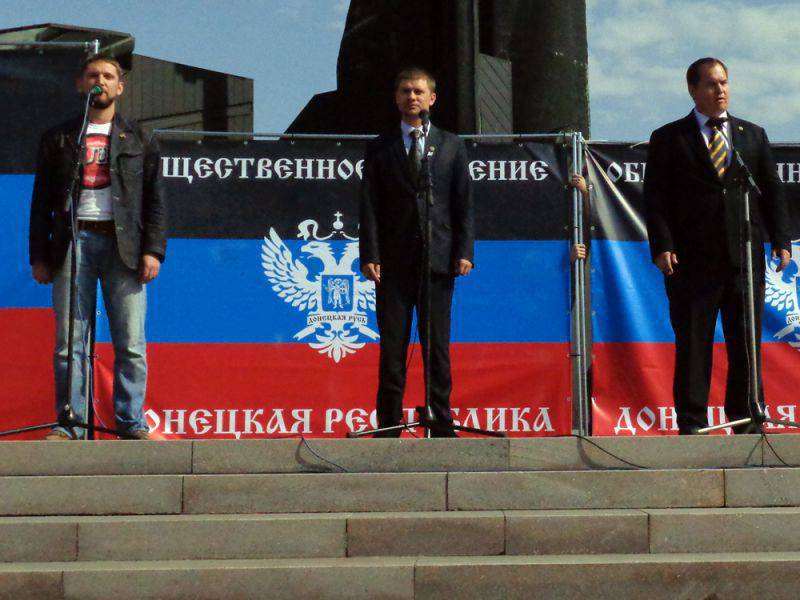 The head of the “Young Republic” Sergey Kondrykinsky greeted the youth and all those present, saying: “Who, if not us, can know the price of peace? When this holiday was established, we did not really hear about it and did not celebrate it, because we did not understand what peace is and what real war is. And today we must appreciate the world. We must remember all those terrible moments that happened on our land. Remember and share our memories with future generations. The youth of the Donetsk People’s Republic, the inhabitants of the Republic cannot be defeated. ”

The representative of the Donetsk Republic movement Boris Rymar reminded: “Today, besides the International Day of Peace, there is also a big church holiday: the Nativity of the Blessed Virgin Mary. And today is the anniversary of the Kulikovo battle. And in general, it turns out that today is the Day of Life. Our day is with you. Some time ago we lived and experienced. Today we are alive and living. Tomorrow we will live and develop. Because we are a strong Donetsk, a strong Republic. Because we are together today. I wish that we live shoulder to shoulder in peace, work, harmony and love.

Alexey Muratov noted that not only soldiers, but also peaceful people were killed in the war, and announced a minute of silence. 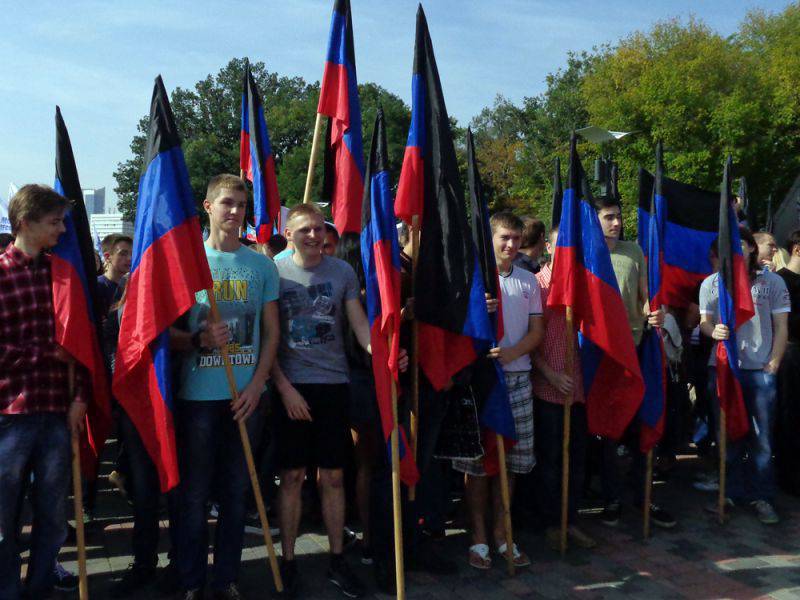 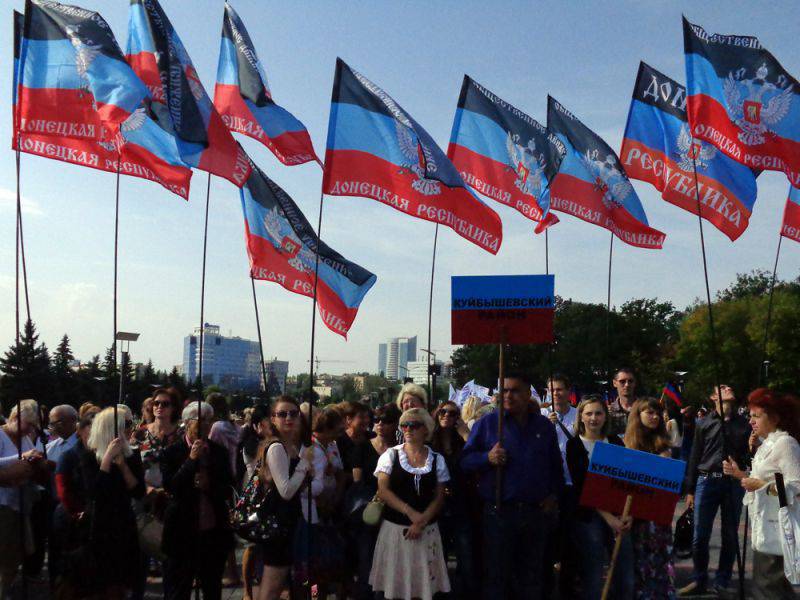 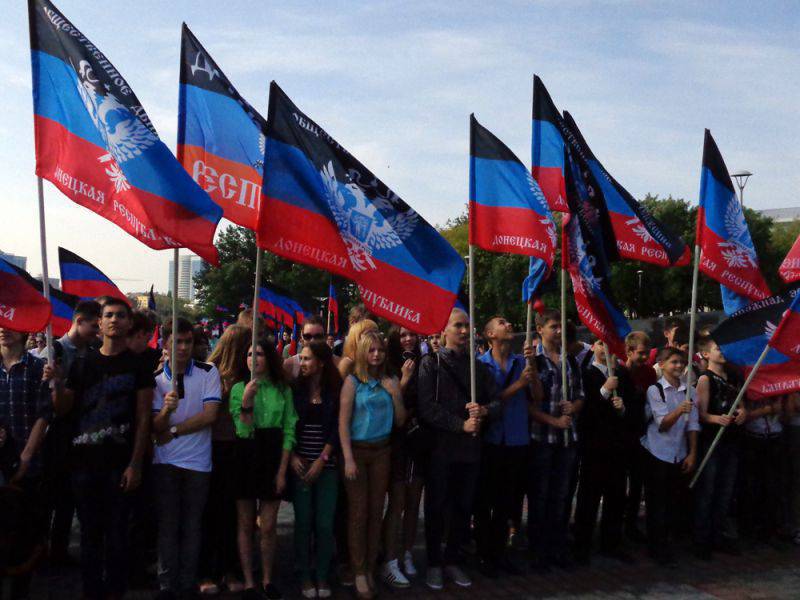 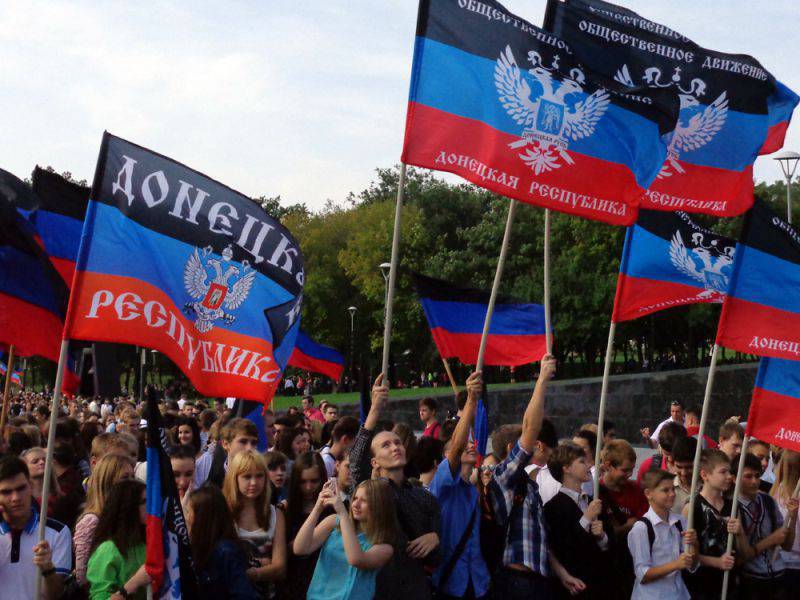 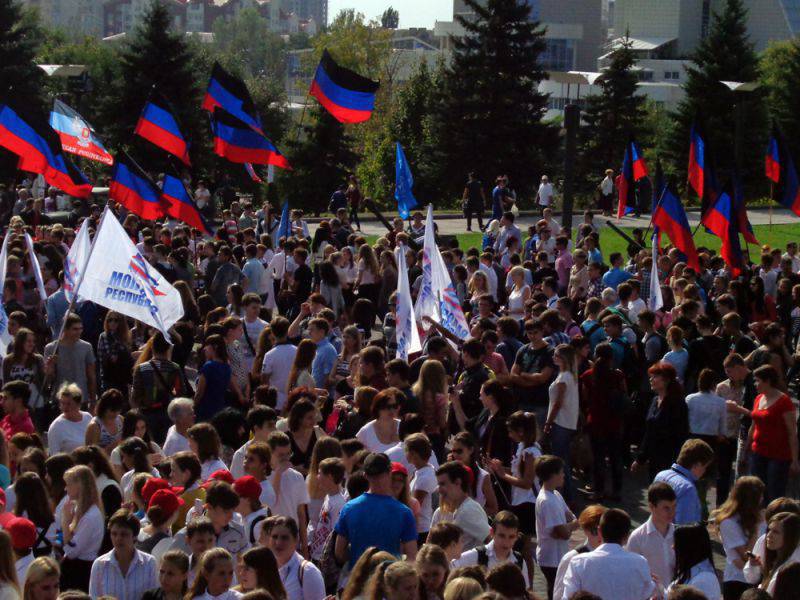 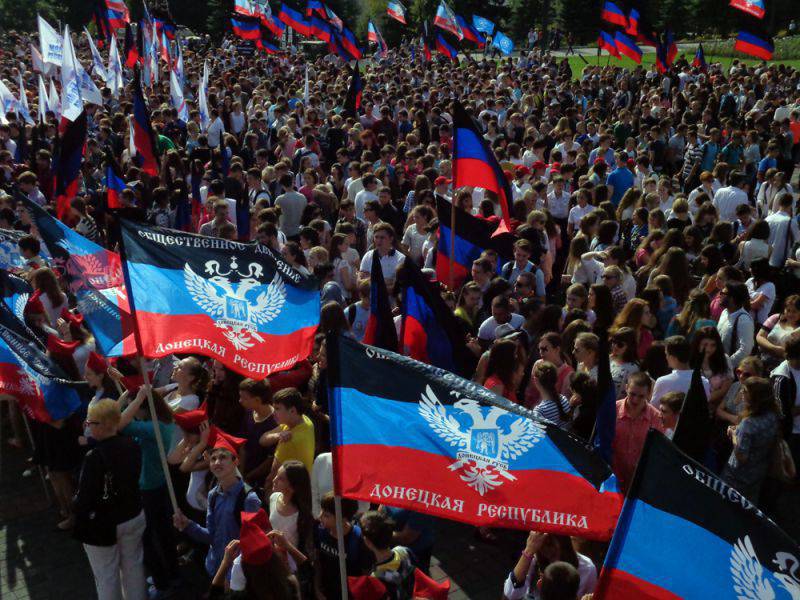 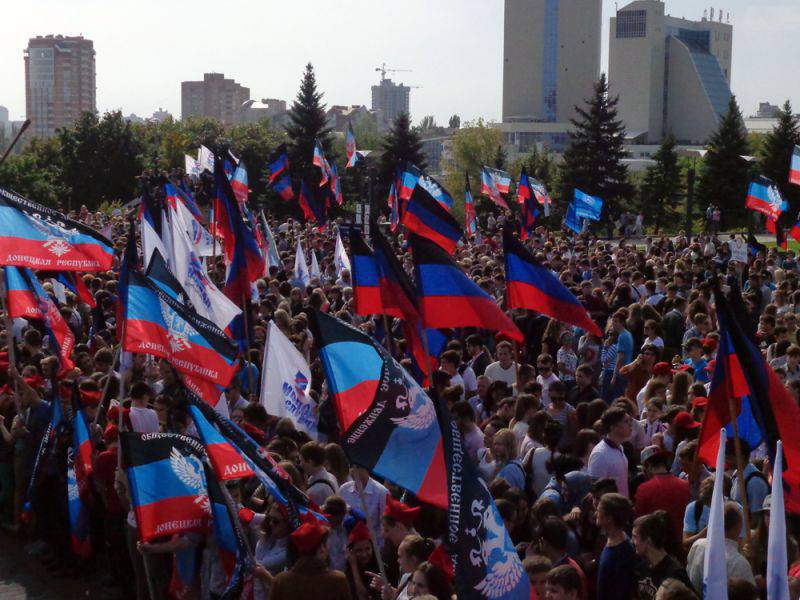 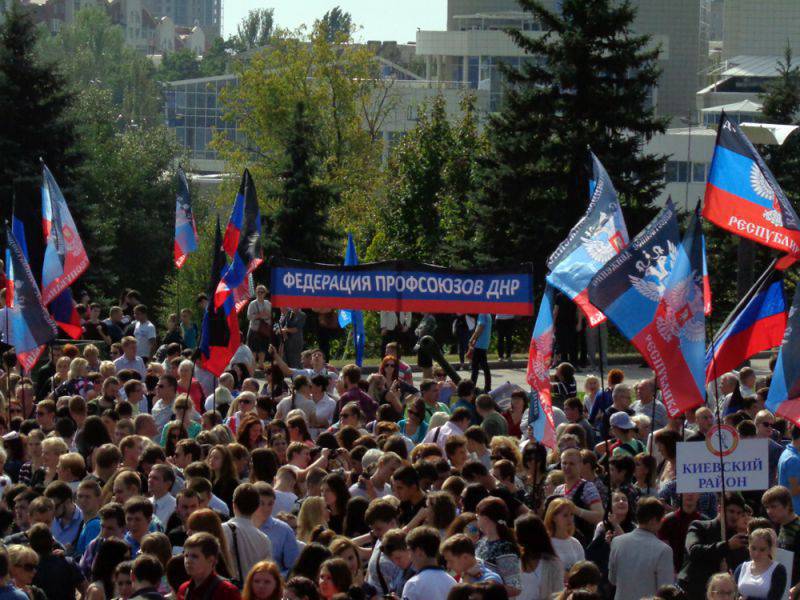 When the metronome tapped 60 for seconds that passed in complete silence, the host of the rally said: “For most people on the planet, the world is an everyday reality. They are calm on the streets, the children go to school. There, the priceless gift of peace may not be noticed by anyone. However, for many people in the modern world, this gift is nothing more than a dream. Many people live in an atmosphere of instability and fear. For more than a year fighting has been going on in the territory of the DPR. We all feel it on ourselves. The war brought Donbas a lot of grief and misfortune. Because of the war, several thousand children lost their fathers and mothers. The war claimed many lives. We must remember all who committed the feat. Who, if not us, knows the price of peace? We have earned the right to do good and work in our land. ” 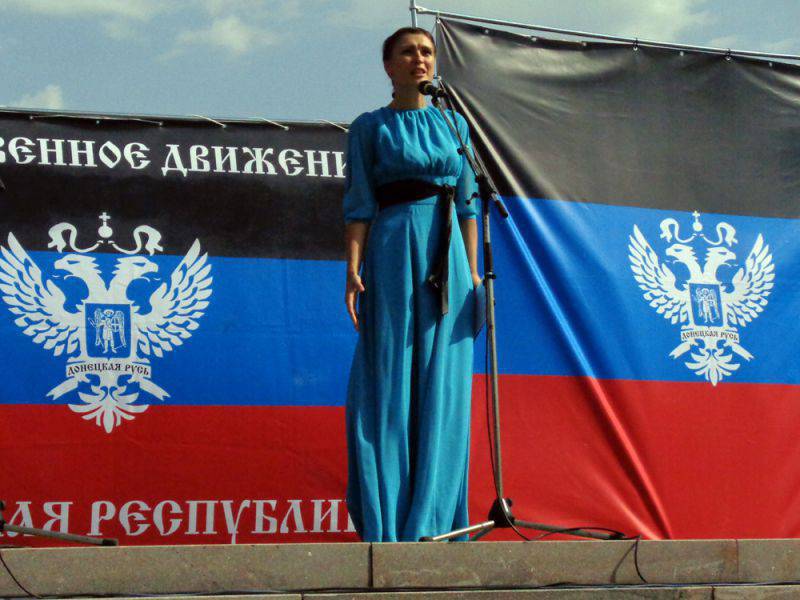 Then she invited school children to the stage to read their messages. They were listened to with tears in their eyes.

“We are students of the 8 class ... Children of Donbass want peace in their native land. We are only 14 years old. We dream of a peaceful sky overhead. Our hearts bleed when we hear and see projectiles explode outside the windows. We really want a smile on our relatives' faces, not tears of disappointment. We appeal to you on behalf of all residents of Donbass and ask you to keep peace in our homeland. Our city is very beautiful. It is full of blooming roses, parks and peaceful courtyards. In our hearts, faith in the fact that peace will come on the streets of our city does not fade. ” 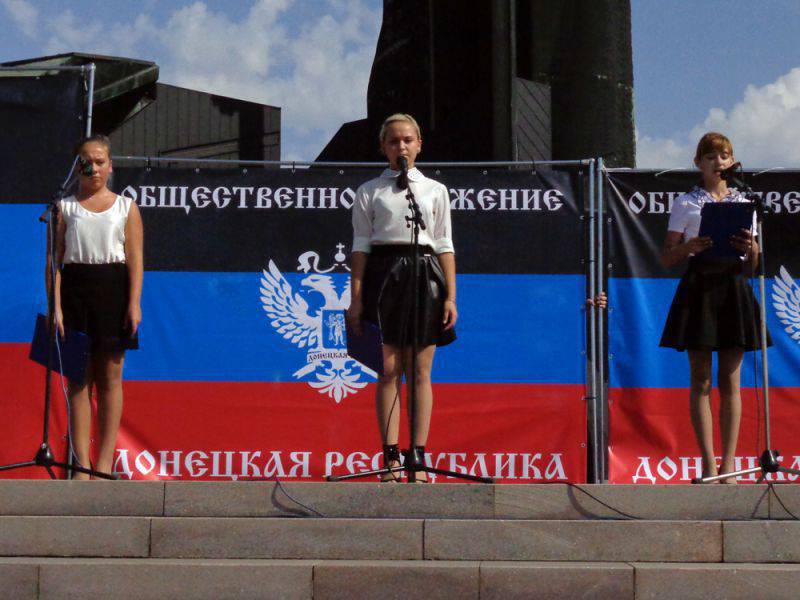 “We, students of the 11 class, appeal to the heads of state to hear us, the children of Donbass. We want peace, silence. We want to wake up in the morning from the gentle touch of my mother, and not from the roar of explosions. We want to go to school, smiling to passers-by, enjoying the singing of birds, and not thinking about where to hide in case of shelling. It would be desirable, falling asleep, to think about tomorrow, to make plans, and not to listen to every noise and not to pray to God that the shell would not get into the house. We love our people very much. Dear presidents, be humane and keep world peace. ”

And the schoolgirl from Snezhny decided to turn to the Head of the Donetsk People's Republic, Alexander Zakharchenko (who, by the way, went on a visit to friendly South Ossetia on that day):

“Dear Alexander Vladimirovich, we appeal to you on behalf of the schoolchildren of Snezhnoye. We want to thank you so much for everything you do for the Republic and its people. The past year was especially difficult for us. Shooting, threats, tears, suffering, thousands of victims ... Many have lost their home, work, family. Panic and insecurity gave rise to fear, and people ran to where it was safe. Everything collapsed, and it seemed that there was no way out. But, despite all this, you have risen to the defense of your native land, to our defense. You tried to raise the Donbass, which collapsed into the abyss. Today the war is still going on, but it is retreating. We very much hope that this horror will soon end, and the ax of war will be buried forever. Children of New Russia believe in you. ”

Letters of the guys were launched into the sky on white balloons. Under the children's song "The Solar Circle" pigeons also flew into the blue. A few more songs and poems about the world were performed. 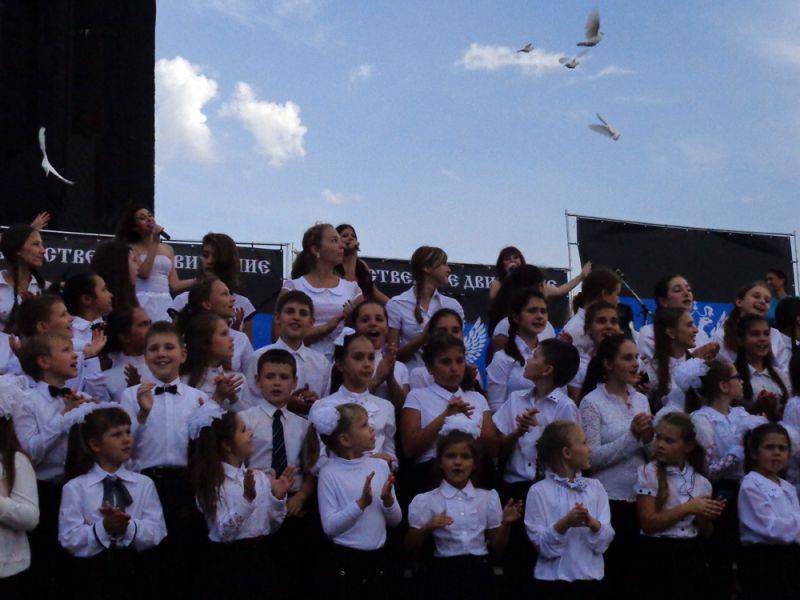 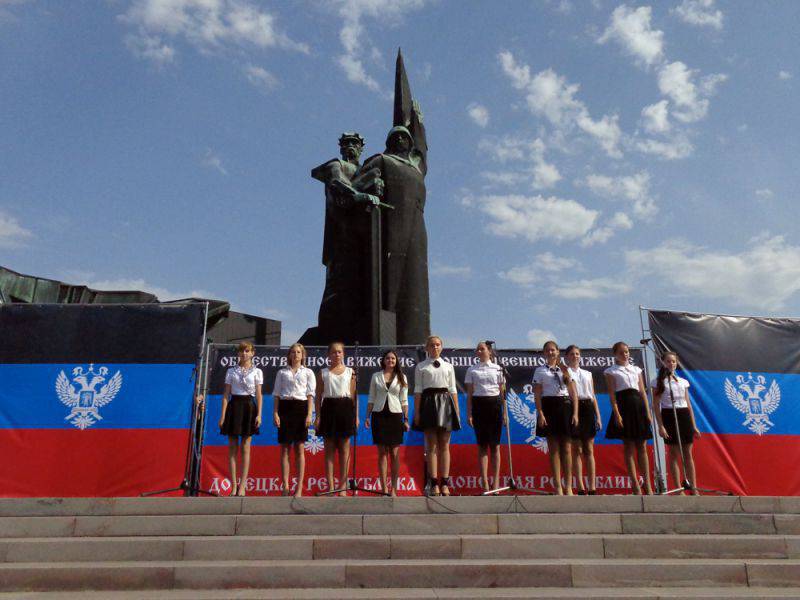 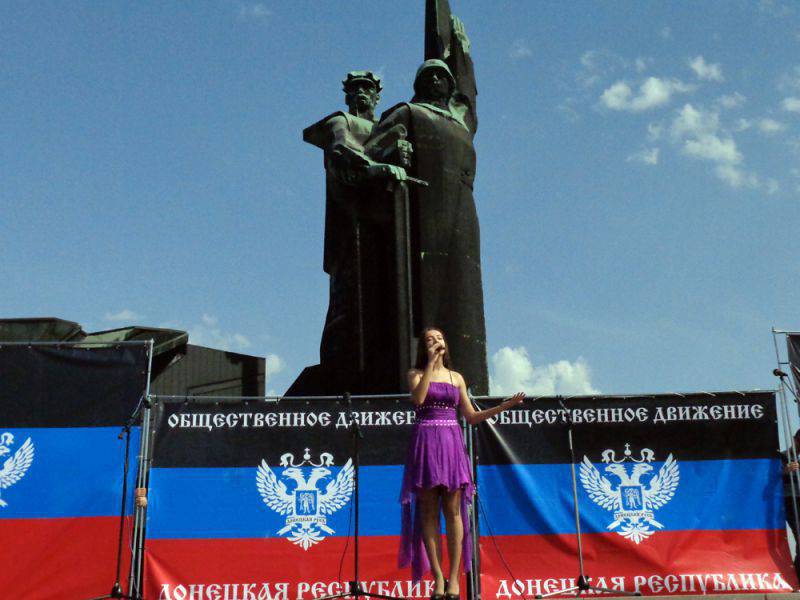 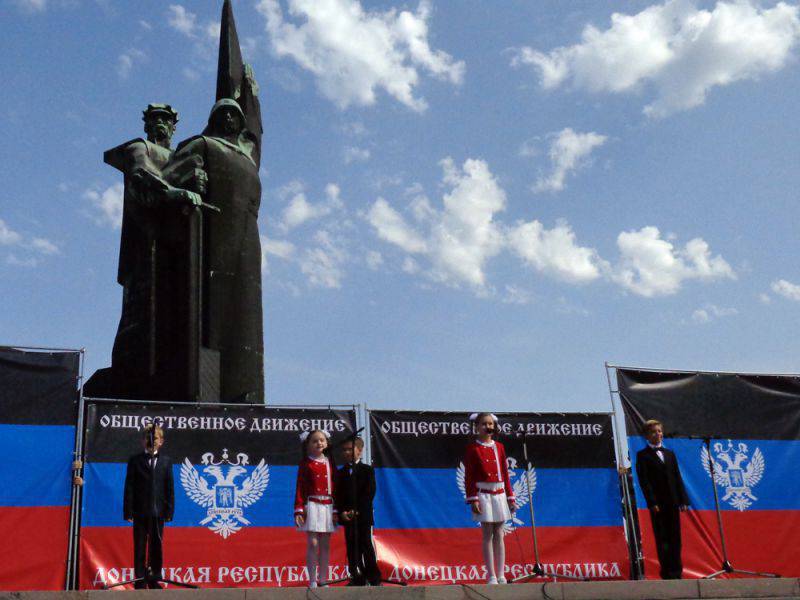 Unfortunately, the hopes that world leaders will hear the children of Donbass are too slim. Many of these today's "leaders" have already earned the bench of the international tribunal for the killed civilians in Libya, Syria, and Donbass. Those who have barbarously bombed Yugoslavia remain in high positions ... Hope is only for those leaders who could remain a man in today's bloody world. And, of course, the courage of ordinary citizens, the courage by which our planet is still alive.

Ctrl Enter
Noticed a mistake Highlight text and press. Ctrl + Enter
We are
Children of Donbass write letters to the front and draw a peaceful citySituational analysis of the death of the MH17 flight (Malaysian Boeing 777), made on the basis of engineering analysis from 15.08.2014
6 comments
Information
Dear reader, to leave comments on the publication, you must to register.