Restoration of imperial traditions in the Red Army 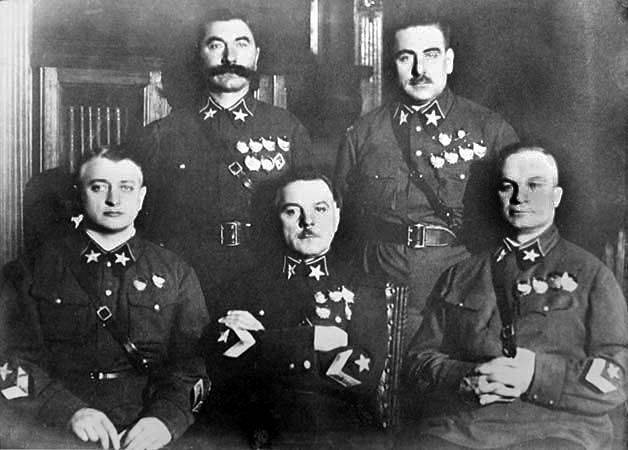 80 years ago, on September 22, 1935, personal military ranks for the personnel of the army were restored in the Soviet armed forces fleet and the title “Marshal of the Soviet Union” was introduced. The first of this highest military rank were awarded to K. E. Voroshilov, A. I. Egorov, M. N. Tukhachevsky, V. K. Blucher and S. M. Budenny.


The military rank determines the legal status or status (rights, duties) of a military person in relation to other military personnel. Military ranks are assigned to servicemen in accordance with their official position, military or special training, length of service, membership in the type of armed forces, the nature of the military and merit. In the Russian army, the signs of distinguishing servicemen at different times were: cold weapon, scarves, sewing on uniforms, epaulets, boas, epaulettes, chevrons and buttonholes.

Initially, the concept of military rank was not - soldiers were called (hence the term “rank”) only by the position they held, whose name was derived from the number of “warriors” who were under the command of the commander. Gradually, however, commanders began to perform not only their direct functions, but became the leaders of the military administration, solving a wide range of tasks. In the old Russian squads there were youths, junior warriors, senior warriors (grids), foremen, centurions, tysyatskie (thousand, analogue of the colonel), temniki (from the Russian word "darkness" - 10 000, analogue of the general). The title of centurion unchanged remained until the first decades of the 20th century.

For the first time in Russia, military ranks appeared in the middle of the XVI century in the Strelets army. It is worth noting that before the Romanovs came to power in the Russian state, the Strelets army consisted of hundreds of archers, and there were no archers or Cossack regiments. The word "regiment" meant not an army unit, but a grouping of often heterogeneous forces, designed to solve a specific tactical task. For example, an ambush regiment, a guard regiment, a large regiment, a siege regiment, etc. Accordingly, the Russian army had no units larger than a hundred, and the mercenaries were reduced to “foreign companies” equal in number to hundreds. The introduction of the regimental system of the foreign system in the XVII century led to the emergence of new military ranks, partly analogous to the all-European. This process ended with the adoption of the first Russian Military Charter in 1647.

During the reign of Tsar Mikhail Fedorovich, the streltsy hundreds were brought together in rifle orders, five hundred each. The order was commanded by the head, besides, hundreds began to be divided into fifty. As a result, new ranks appeared in the Streltsy army. Under Tsar Alexei Mikhailovich, the Archer orders are converted into regiments, while their number has been increased to ten hundred. For the first time appeared the title of "colonel", and an increase in the number of connections led to the appearance of the title of "half-head" or "half-colonel." In the regiments of the foreign system was its own hierarchy of titles. The Military Charter of 1647 was for the first time enshrined in law the system of military ranks, military personnel were divided into categories - privates and constables ("lower", "medium" and "high consignors").

In 1680, Tsar Fedor Alekseevich issued a Decree on military ranks, which carried out the unification of military ranks: now the archers, under the penalty of punishment, were named after the ranks of the foreign system. A new title from the category of junior sergeant (non-commissioned officer) - ensign was assigned. In 1698, a new Charter was issued, authored by an Austrian general in the Russian service of A. A. Weide. For the first time, the rank of brigadier was first introduced, since the brigade building of corps and divisions appeared, and specific general ranks for the types of troops were also introduced. Tsar Peter I finally introduced a unified system of military ranks of the Western European type in the 1716 Army Charter and the Maritime Charter of 1720, which were issued in the Table of Ranks in 1722 year. During the reign of other emperors, some titles were abolished.

After the October Revolution 1917 and the creation of Soviet Russia, all the old ranks and ranks were canceled. The commanders in the army and navy differed only in their positions: in the army, the commander of a platoon, company, battalion, regiment, corps division, army, front, in the navy, commander of a ship, detachment, brigade of ships, etc. In 1924, the title for all military personnel was introduced - the red warrior of the Workers 'and Peasants' Red Army, in abbreviated form - the Red Army (Red Navy). Commanders from ordinary soldiers first distinguished by red bows, bandages, then - triangles, squares, rectangles and diamonds.

As a result, the USSR began to return to the old system. By decree of the Central Election Commission and the Council of People's Commissars of the USSR from September 22, personal military ranks for the army and navy personnel were restored, and the following titles were introduced: “foreman”, “lieutenant”, “captain”, “major”, “colonel”. The insignia identified the place on the buttonholes. The sergeants and foremen hung triangles. The lieutenants were given cubes. Senior officers - rectangles. In common language they were called sleepers.

The servicemen, who were in the leadership of the Red Army, began to be divided into a commanding and commanding staff. Senior commanders began with the captain. He was given one sleeper. Major - two sleepers. Colonel received three sleepers. September 1 1939 introduced a new military rank - Lieutenant Colonel. He got three sleepers. Accordingly, the colonel added one more to his three sleepers.

True, the generals have not yet returned. After all, they were recently beaten on the fronts of the Civil War. Kombrigs, divisional divisions, com-corps, commanders of 2 and 1 rank have survived. Kombrig received one lozenge, a divisional commander received two lozenges, and a corps corps received three lozenges. The commander of 2 rank is four lozenges, the commander of 1 rank is four lozenges and a star. Such a system existed until 1940, when the generals and admiral ranks were restored, but without epaulets. The shoulder straps were restored in 1943. Life itself made it do so, because with epaulets the title is much easier to distinguish than with buttonholes. It had a definite meaning in a combat situation.

In addition, the Order of 22 September 1935 was introduced the title of "Marshal of the Soviet Union." Before 26 June 1945 was the highest, then preceding the rank of Generalissimo of the Soviet Union. The marshals were distinguished by a large golden star on the trench coat. The first assignment of the title of Marshal of the Soviet Union took place on November 21 1935, when the chief top military leaders of the Red Army, People’s Commissar of Defense of the USSR K. Ye. Voroshilov, Chief of the General Staff of the Red Army A.I. Egorov, Deputy Commissar of Defense of the USSR were awarded the highest personal military rank. M. N. Tukhachevsky, Commander of the Special Red Banner Far Eastern Army V. K. Blucher and inspector of cavalry of the Red Army S. M. Budyonny. Before World War II, Marshal Timoshenko, GI Kulik, and B. M. Shaposhnikov also received the rank of marshal.

A similar title existed and exists in many countries in several versions: Marshal, Field Marshal and Field Marshal General. Initially, the word “marshal” meant not a military leader, but a high court position (its source was the position of horseman, horse guard, France. Maréchal - “blacksmith shoe”). For the first time, it was used in the Teutonic Order of Knights as a designation for a high military rank. It was a cavalry commander. The sign of distinction of the marshal in many armies was the solemnly presented symbolic rod, decorated with the symbols of the state - the marshal's baton. Tsar Peter I introduced the rank of generalissimo to the commander-in-chief in 1695, then replaced him in 1699 with the rank of Field Marshal, who, in his opinion, “is the commander-in-chief in the army. His warrant and orders must all be honored, in principle, the whole army from his sovereign was handed to him. ” In Russia, there were several dozen field marshals in the period before 1917.