Liberation campaign, or why "At the Cresses" were happy to get rid of the Poles

26 September 2015
35
17 September 1939 of the year The Red Army entered the territory of the Second Polish – Lithuanian Commonwealth that collapsed under the blows of the Wehrmacht, in order to protect the population of Western Ukraine and Western Belarus under protection from the Germans. Ukrainian and Belarusian women greeted the Red Army with flowers, and the Polish officers captured splashed dirty water, shouting: “So the end of your Polish domination has come!”. 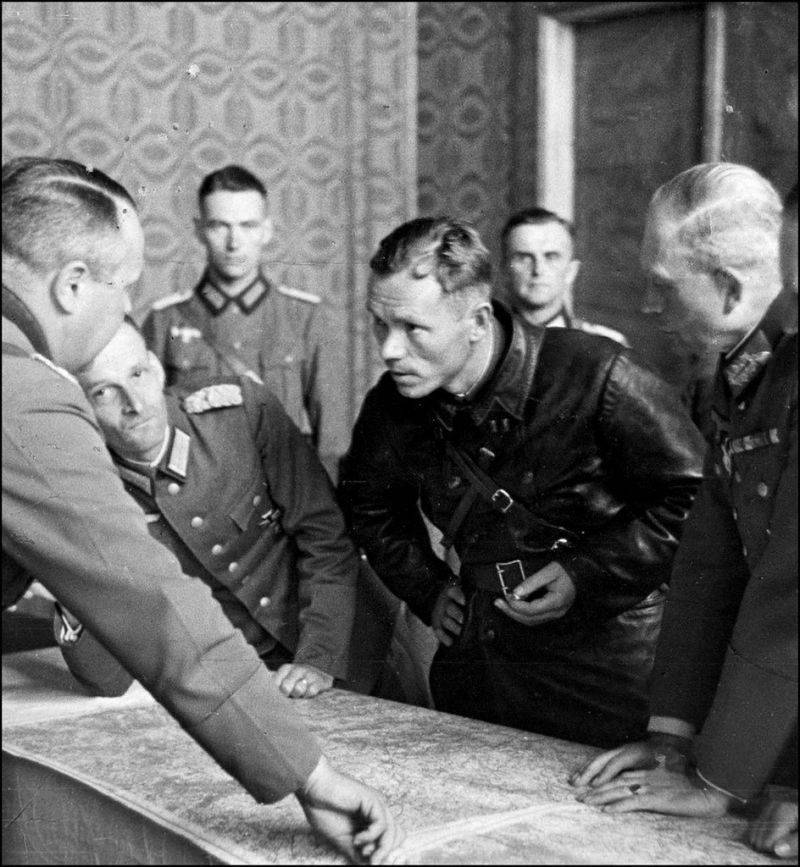 Soviet and German officers discuss the line of demarcation in Poland. September 1939 of the year
To understand why this happened, we need to remember what kind of policy in 1920 – 1939 years was carried out by Warsaw “on the couch” (Polish. Kresy Wshodnie - eastern suburbs). This word the Poles called the occupied territories of Western Ukraine, Western Belarus and southern Lithuania.

Surprisingly, but a fact: a part of the Belarusian intelligentsia at first seriously hoped that the Poles, having recreated their statehood in 1918, would also help the Belarusians to do this. However, the gentlemen quickly showed how divinely hopeless were divorced from reality. Already in 1921, the newspaper Belorusskiye Vedomosti stated: “The attitude towards Belarusians by many heads and a certain part of the public is very dismissive. We were considered to be Muscovites, then Bolsheviks, then generally second-rate people. Belarus, partially under Polish power, is divided into provinces-voivodship, and it is not visible that these voivodships pursue a policy according to the principle declared in the first days of Polish domination in our region: “equal with equal, free with voluntary” ... ""

The height of naivety was to expect from the Poles that, throwing such slogans as bait, they put them into practice. Moreover, Józef Pilsudski, speaking on February 1 in Vilnius 1920, unequivocally promised that he was not going to make any political concessions "in favor of the Belarusian fiction". And the leader of the Second Commonwealth kept his promise. 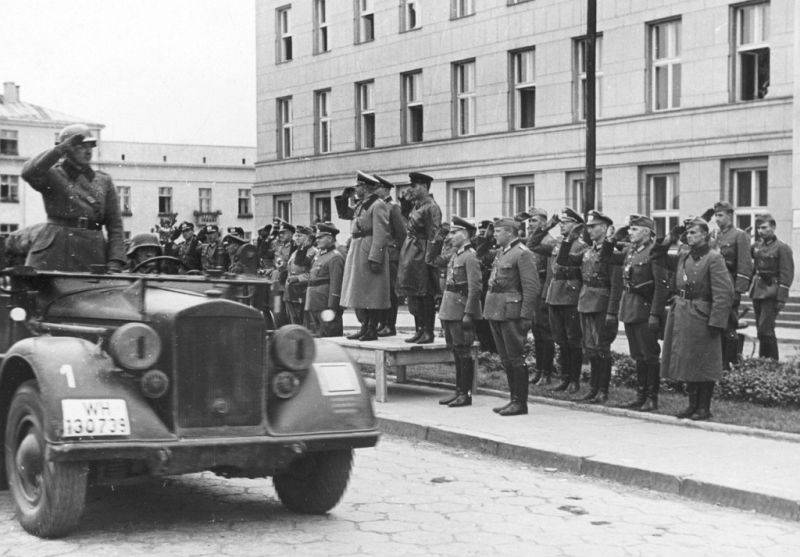 General Heinz Guderian and the brigade commander Semen Krivoshein during the transfer of the city of Brest to the Soviet Union
Pilsudski said nothing new or original. The well-known Belarusian historian Kirill Shevchenko recalled that the leader of the Polish national democracy, Roman Dmovskiy, “in one of his works, at the beginning of the twentieth century, spoke frankly about Belarusians, Lithuanians and Ukrainians as“ about Poles of lower grade ”incapable of their own statehood. Warsaw’s denial of any right of Belarusians to their own statehood or even to autonomy logically flowed from the general perception of Belarusians by Polish public opinion as “ethnographic material” that should be swallowed and digested ”.

As we see, Polish politicians competing with each other treated Belarusians and Ukrainians in a similar manner.

Warsaw immediately headed for the polonization of the suburbs. In the 1921 year, on the eve of the census, Belorussian Gazette anxiously wrote: “It is important who will conduct the survey: local civilians or not. If gendarmes, policemen or “Kresovian guards” guards ask questions about nationality, then they are able to knock the person out of agreement not only with the fact that he is a Pole, but even with the fact that he is a Chinese ... ”

Fears were not in vain: the number of Poles "on the couch" has increased dramatically. According to the official census results, 1034,6 thousand Belarusians lived in Novogrudok, Polessk, Vilna and Belostok voivodeships. Although even Polish researchers estimated the real number of Belarusians living in Poland to be about one and a half million people. Estimates of Western Belarusian public figures ranged from two to three million people. 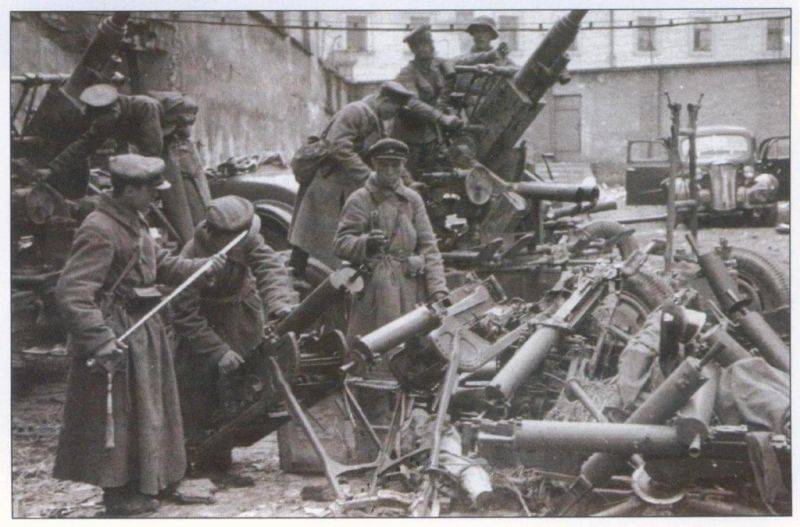 Trophies of the Red Army in Western Belarus
Without any embarrassment, Warsaw carried out a policy of Polonization "on the couch", some Polish historians do not conceal either. For example, Grzegorz Motyka writes: “First of all, Polonization touched various institutions: all those who refused to take the oath of allegiance to the Polish state were eliminated. Then Ukrainian departments of Lviv University were liquidated; In addition, it was decided that henceforth only Polish citizens who served in the Polish Army will have the right to study at the university. Finally, December 5 1920, the whole of Galicia was divided into four voivodships: Krakow, Lviv, Ternopil and Stanislav. At the same time, the voivodship's borders were pushed westward so as to change the demographic composition of the population in favor of the Poles. Thus, in the Lviv voivodship there were counties inhabited mainly by Poles: Zheshovsky, Kolbushovsky, Krosno and Tarnobrzeg. Eastern Galicia was officially named Eastern Malopolska. At the same time, in December 1920, the Legislative Saeima passed a law on allocating favorable financial terms to honored soldiers and disabled veterans - residents of the central regions of Poland - lands in Volyn ... ”

It was there that the infamous Volyn Massacre took place in 1943.

Formally, the Polish Constitution guaranteed equal rights to all Polish citizens, regardless of nationality or religious affiliation. “But in reality, ethnic Poles have become a privileged group,” Motyka admits. - A vivid illustration of how constitutional rights were respected in practice is the following fact: in the Second Polish-Lithuanian Commonwealth no non-Polarist ever held the post of minister, governor, or at least the mayor. ”

The Poles, who pursued such a policy, should not count on the sympathy of the Belarusian, Ukrainian and Lithuanian population of the country.

14 September 1939, the newspaper Pravda reported that although since the outbreak of hostilities between Germany and Poland, "a dozen days have passed, it can already be argued that Poland suffered a military rout that led to the loss of almost all of its political and economic centers."

Two days later, German troops were on the line Osovets - Bialystok - Belsk - Kamenets-Litovsk - Brest-Litovsk - Vlodawa - Lublin - Vladimir-Volynsky - Zamosc - Lviv - Sambir, occupying half of the territory of Poland. The Germans occupied Krakow, Lodz, Gdansk, Lublin, Brest, Katowice, Torun and other cities in a state that was collapsing before the eyes of the people.

The Polish-German war revealed the internal failure of the Polish state. Within ten days of military operations, Poland lost all its industrial areas and cultural centers. Warsaw, as the capital of Poland, does not exist anymore. The Polish government fell apart and shows no signs of life. This means that the Polish state and its government virtually ceased to exist. Thus, the treaties concluded between the USSR and Poland ceased to operate. Left to itself and left without leadership, Poland has become a convenient field for all sorts of coincidences and surprises that could pose a threat to the USSR. Therefore, being hitherto neutral, the Soviet government can no longer be neutral with these facts.

The Soviet government also cannot be indifferent to the fact that the short-lived Ukrainians and Belarusians living in Poland, abandoned to their fate, remain defenseless.

In view of this situation, the Soviet government ordered the High Command of the Red Army to order the troops to cross the border and take under their protection the lives and property of the population of Western Ukraine and Western Belarus. "

After listening to the chased formulations of the official document voiced by Potemkin, Grzybowski, as follows from the recording of the conversation, said that he could not accept it, because "the Polish-German war is just beginning and we cannot talk about the disintegration of the Polish state." Hearing this statement cut off from reality, Potemkin reminded Grzybowski that “he cannot refuse to accept the note being handed to him. This document, emanating from the Government of the USSR, contains statements of utmost importance, which the ambassador is obliged to bring to the attention of his government. ” While the Polish diplomat wandered, the note was delivered to the Polish Embassy in Moscow. And in 5 hours of the morning, units of the Red Army and the operational groups of the NKVD crossed the state border with Poland.

“It was, to put it mildly, not quite true,” Vladimir Makarchuk, a professor at the Lvov Institute of the Ministry of Internal Affairs of Ukraine, commented on the statement of high-ranking fugitives. “It is significant that the first time mentioned“ protest ”was able to be made public more than a week after the escape, and then far beyond the borders of Poland.”

In the meantime, Belarusians and Ukrainians met the Red Army as a liberator. At the same time, they sought to put out on the Poles the anger accumulated over the years. In a number of places the people took up weapon. Historian Mikhail Meltyukhov writes that on September 20, the motorized group of the 16 rifle corps under the command of the commander, Rozanov, “had Skidel, he was confronted with a Polish squad (about 200 people) who had suppressed the anti-Polish performance of the local population. In this punitive raid, 17 was killed by local residents, of whom two teenagers are 13 and 16 years. ” 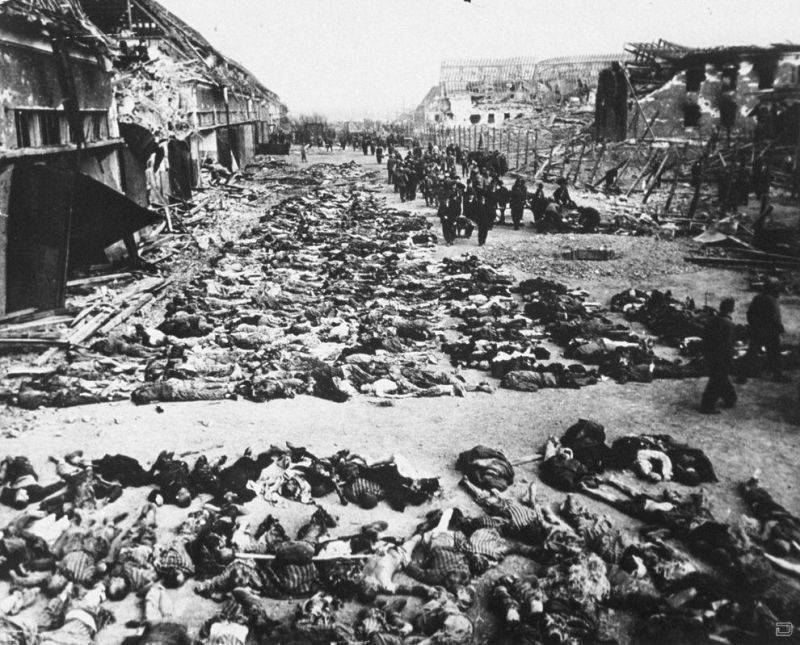 Victims of the Volyn Massacre
Violent reprisals against the population could not save the agonizing Polish power from collapse. It is significant that the Poles, who had previously made plans to seize Soviet Ukraine, in September 1939 preferred to surrender to the Red Army, fearing to fall into the hands of Ukrainian and Belarusian peasants. A confirmation of this is the report of Lev Mehlis from 20 of September: “Polish officers ... fear Ukrainian peasants and the population, who intensified with the arrival of the Red Army and deal with Polish officers, as fire. It got to the point that in Burshtyn, Polish officers sent by the corps to school and guarded by a small guard asked to increase the number of guards as prisoners, fighters, in order to avoid a possible reprisal of the population. ”

“The majority of the population of Western Belarus,” writes the Belarusian historian Mikhail Kostiuk, “after almost twenty years of national, socio-economic and political oppression by the Polish authorities, joyfully welcomed the Red Army, meeting it with bread and salt. In many places, many thousands of meetings were held, red flags were hung out. It was a sincere rush of people who believed in their liberation and in a better life. ”

Ctrl Enter
Noticed oshЫbku Highlight text and press. Ctrl + Enter
We are
Belarusian wonders. Is the museum easy?Dark spots of history: the tragedy of Russians in Polish captivity
Military Reviewin Yandex News
Military Reviewin Google News
35 comments
Information
Dear reader, to leave comments on the publication, you must sign in.