22 September 2015
22
In the past few years, the Yak-130 combat training aircraft has been mass-produced and actively used for training flight crews. It is noted that the on-board radio-electronic equipment and control systems of this machine make it possible to imitate the “behavior” of all modern domestic combat aircraft: this feature is most actively used in the training of future pilots. In addition, experts say that the Yak-130 has great potential for modernization and can perform a wide range of tasks, not limited only by pilot training.


It has long been known that the Yak-130 will be able to perform some combat missions. The project in its basic configuration allows the transportation of missile and bomb weapons weighing up to 3 t. To destroy aerial targets, this aircraft can use short-range P-73 air-to-air missiles, and unguided missiles and bombs of various types are offered for strikes against ground targets. caliber to 500 kg. Thus, if necessary, the Yak-130 can, with some restrictions, be used as a combat aircraft.

Not so long ago, representatives of the Russian defense industry touched upon the modernization of the combat Yak-130 with the "transformation" into a full-fledged light attack aircraft. It was argued that Russian specialists could undertake such a project in case of demand from potential foreign customers. Later, in confirmation of these statements, a modernized version of the aircraft with enhanced capabilities for attacking ground targets was demonstrated. 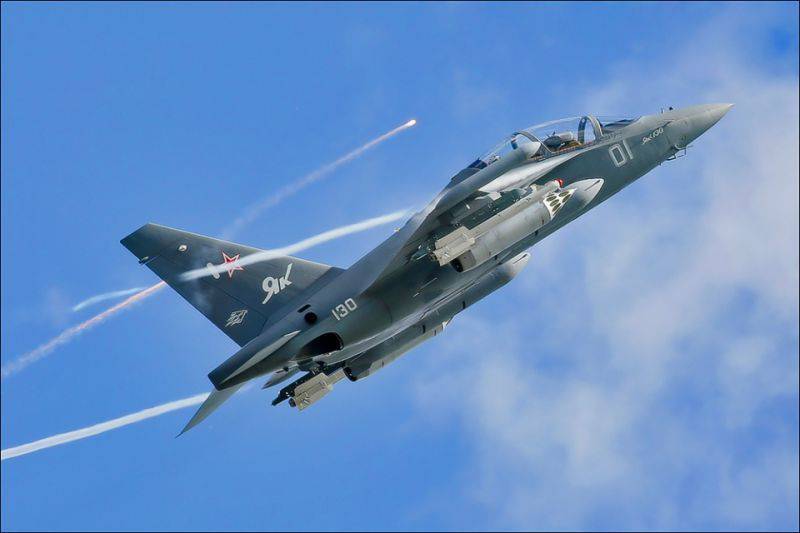 At the recent aerospace show MAKS-2015, the Irkut corporation, engaged in the serial construction of the Yak-130, demonstrated the first copy of a modernized aircraft with an updated composition of equipment. The main innovation of this modernization, aimed at expanding the combat capabilities of the aircraft, is the laser range finder-target designator installed in the nose of the fuselage. It is expected that such equipment will allow the aircraft to more effectively carry out strikes against ground targets using all available weapons. With the help of a rangefinder, the aircraft will be able to more accurately determine the location of the target and carry out the attack.

The TASS news agency, citing a representative of the Irkut Corporation, reported that such a modernization was a response to a corresponding request from one of the foreign countries. The unnamed foreign customer expressed interest in the shock modification of the Yak-130, as a result of which Russian enterprises made some modifications to the aircraft. By the time the MAKS-2015 exhibition began, experts had time to conduct some tests on the updated aircraft and its new equipment. In the future, it is expected to begin testing weapons using a rangefinder.

The introduction of a laser rangefinder into the avionics, as follows from the statements of specialists, makes it possible to markedly increase the strike potential of a combat training aircraft. To further enhance the performance of the existing Yak-130, new equipment is needed to find targets and ensure effective attacks. Currently, domestic enterprises are actively engaged in such projects.

An active participant in the Yak-130 aircraft modernization project are enterprises that are part of the Radio Electronic Technology Concern (KRET). They are developing new on-board systems for domestic aviation equipment in general and for the Yak-130 aircraft in particular. According to the latest data, KRET specialists are currently engaged in several projects whose purpose is to expand the combat capabilities of this aircraft.

It is reported that as part of creating a promising light attack aircraft, KRET is developing several new instruments. For the new aircraft, a new radar station (radar) and an optical-electronic aim-navigation system (OEPNK) are being created. Such equipment will greatly simplify the process of tracking the situation and finding the target. In addition, it is planned to improve the characteristics of the attack of detected objects and expand the range of usable weapons.

Vladimir Mikheev, Advisor to the First Deputy Director General of KRET, states that after the planned modernization, the Yak-130 will be able to effectively solve tasks in the framework of several combat use scenarios envisaged for fourth-generation fighter jets and attack aircraft. At the same time, Mikheev notes that the Yak-130 has advantages over other aircraft in terms of efficiency and basing features. The modernized aircraft will be able to participate not only in the fight against illegal armed groups and terrorists, but also with a modern, well-equipped enemy. In the latter case, a light attack aircraft can strike, without entering the zone of action of enemy air defense.

The official website of the Radioelectronic Technologies concern provides some details of the avionics project for the upgraded version of the Yak-130. Prospective radar will enter the complex of radio-electronic means, which will operate under the control of a single combat central computer. OEPNK and other systems will also be included in this complex.

The radar will allow the aircraft to monitor the situation in the air and on the ground. In addition, it will be able to carry out mapping of the underlying surface and thereby facilitate the implementation of combat missions. With the help of radar, the aircraft will be able to search for targets and carry out target designation when using air-to-air and air-to-surface weapons of various types, including anti-ship and anti-radar missiles.

Optical-electronic sighting and navigation system will provide an opportunity to use high-precision missile and bomb weapons. In particular, it will be possible to use guided missiles P-73E, X-29L, X-25MS, X-29ML, Whirl-M, etc.

V. Mikheev argues that such a modernization of on-board electronics will significantly increase the potential technical characteristics of the Yak-130. In terms of its capabilities, it will approach the specialized Su-25CM attack aircraft. In addition, in some situations, the upgraded Yak-130 will be able to replace the Su-30CM fighter, which, among other things, will save the resource of more expensive equipment.

Thus, at present, one of the main tasks of the Irkut Corporation and the Radioelectronic Technologies concern is the “transformation” of a combat training aircraft into a full-fledged strike machine. To implement these plans, it is necessary to develop several new systems that expand the combat capabilities of the aircraft. These works will take some time and, probably, in a few years a full-fledged sample of a light attack aircraft based on the Yak-130 will be shown.

In the future, the current combat training aircraft Yak-130 can become the basis for another combat vehicle with a number of new features. V. Mikheev notes that an unmanned aerial vehicle of a shock designation may be created on the basis of an existing aircraft in the future. Such an unmanned attack aircraft will have high performance, and in some respects it will surpass similar foreign-made equipment. Thus, the unmanned Yak-130 will surpass one of the most famous drums of the UAV, the American design, in terms of the number of tasks and thrust-carrying capacity.

However, the project of an unmanned light attack aircraft is associated with certain difficulties. KRET already has a number of technologies needed to create such a machine. However, when developing a full-fledged modernization project, you will have to spend a lot of time and effort on the most serious processing of the original machine. To install remote control systems will have to make significant changes to the existing complex avionics.

The dates for the start of work on the project of the Yak-130 baseless attack aircraft have not yet been named. Moreover, so far even the very possibility of starting the development of such a project can be a subject of discussion at different levels. Therefore, at the moment, specialists of several defense industry enterprises are engaged only in the project of a light attack aircraft based on a combat training aircraft. Nevertheless, it cannot be excluded that in the future the Yak-130 will become the basis for other equipment of other classes. The modernization potential of the project has not yet been exhausted and can be used in new projects.

Ctrl Enter
Noticed a mistake Highlight text and press. Ctrl + Enter
We are
An-12 in AfghanistanSu-25 attack aircraft in Afghanistan
22 comments
Information
Dear reader, to leave comments on the publication, you must to register.