Russian military will have to tip ISIS into the desert 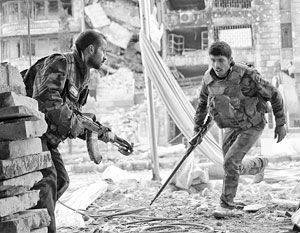 Talking about the possible participation of the Armed Forces of the Russian Federation in the battles in Syria within the framework of the international coalition is the most important topic of recent days. At the same time, any analogies with Afghanistan are irrelevant here - other targets, other allies, another tactic. It remains to determine how much responsibility the Russian army can assume in order to destroy ISIS for good.


Already at the first stage - goal setting - the American military machine made a strategic mistake. They perceived ISIS as an army-organized system that can be defeated by targeting key points and positions as defined by the CIA. It quickly became clear that ISIS had no permanent strategic points, as well as supply systems. Moreover, the military structure of the grouping itself does not involve the formation of a united front, and the terrain only contributes to this. The main strategic force of ISIS turned out to be its chaotic nature: their battle groups are able to move quickly across desert or semi-desert territory, while they can capture settlements only with the help of incessant terror.

We all went through it. First, several militant groups penetrate into the settlement, which arrange large-scale terrorist acts, mainly using suicide bombers (people are not a problem). Then, the idea of ​​what will be much worse, if not surrender, is conveyed to the population of the city or to its elite. To demonstrate the determination held public executions. After that, the city, as a rule, surrenders itself. For the entire two year history ISIS only one settlement was taken by assault: the Kurdish Mosul, which would not surrender under any circumstances. The then commander of the ISIL troops in the Iraqi direction, Tarkhan Batirashvili, captured the city along with the warehouses of the American military equipment, which was left to the government forces of Iraq.

With all this, quite recently it was widely believed that the system that ISIS installs in the occupied territories is supposedly welcomed by the local population, tired of corruption and other Eastern evils, as well as the administrative horrors of the American occupation system. This point of view was supported by some Russian commentators. An exceptionally cannibalistic regime with its monstrous public executions and frankly anti-Islamic rhetoric (a vivid example - an order to destroy the Kaaba) was perceived as a reaction to American expansion, which greatly distorted the picture of the world. The reality turned out to be worse than predicted, although a certain idealistic veil is still preserved around the grouping, since anti-American rhetoric is now captivating many.

But back to the front. Hold a solid front ISIS is not able to even in the desert zone. Tactics based on the rapid movement of mobile groups without heavy equipment, based only on "technicals" - the old Toyota pickups with machine guns mounted on them, work only where there is no adequate response. Driving from the air in the desert for each pickup can afford Israel in Gaza, where such operations are rare and, as a rule, are based on accurate intelligence data. In continuous mode, this means pouring from empty to empty. In place of the bombed group, a new one will appear - and so on to infinity. Without a ground operation in a territory already controlled by ISIS, it cannot be defeated.

The heavily populated territory of ISIS is in principle incapable of controlling. To keep a large city, ISIS must either completely deprive its population (Palmyra, Dar az-Zor), or dramatically increase the size of its army. Now it can be estimated at 30 thousand permanent personnel with a potential willingness to mobilize up to 200 thousand. The quality of the mobilized is very low, but for the kind of military operations that ISIS prefers, so much is not needed. Another thing is that among these peasants there are not and cannot be military specialists. Therefore, the huge arsenals that ISIS either captured in Iraq, or simply received in Syria, when it was still part of the anti-Assad coalition, are useless - in these Tanks no one to plant. The core of the ISIS army will still be fanatics, the number is unlikely to exceed the line of 30 thousand people. Zealots - piece goods.

Not being able to control the front and large populated areas, ISIL exposes the units that are more successfully coping with such tasks in front of themselves on problem areas. For example, "Front al-Nusra." They work "laying" between the government forces of Syria and the volatile detachments of ISIS. At the same time, the group is forced to keep a significant part of the “tested” fanatical units in the rear: to protect the concentration camps for the “infidels”, to maintain order in the occupied territories, to impose their style and way of life.

In such an environment, the main danger is not so much part of ISIS, as the same “Al-Nusra” and others like it. These people imagine what regular combat operations are, front, street fighting, although in reality they have not met with an adequate adversary. If we seriously talk about the possibility of the participation of the Russian armed forces in battles on the territory already controlled by ISIS, the priority will be to identify those key points where it will be possible to overturn the enemy into the desert. And already there to wage a war of annihilation.

Simply put, positional battles, including in the urban zone, will remain on the shoulders of the Syrian government army. They are already accustomed to them and, despite the losses, achieved significant success. This is their job. Yes, heavy, dusty, but in the end, this is their homeland, for which they are fighting. They can be helped only by a quick rearmament, by the delivery of new armored vehicles, which, according to a number of data, has already begun. The absence of global breakthroughs of the government army has recently been directly connected precisely with the loss of an armored vehicle fleet without adequate compensation.

But the counterattacking actions that could have knocked ISIL into the desert are precisely in the powers and capabilities of parts of the international coalition, including the Russian military. And the war should be fought not so much for the territory (well, ISIS captured the whole desert - what does it do to it?), But rather to destroy the enemy, no matter how cruel it sounds. The core, core of the ISIS army consists of fanatics living in a parallel universe. They cannot be defeated by seizing a key point, the capital (they don’t even have it, for the whole world is a future caliphate) or by undermining their economic base. They can only be destroyed by tearing out the natural basis of fanatics from under ISIS. This is sad, yes. But this is the only option.
At the same time there is no need to control the settlements - the local people organize themselves. In Iraq, they will recreate the old regime on the principle of "as under Saddam, but without Saddam." In Syria, the government system will return, which, judging by the words of Bashar al-Assad, has long been ripe for certain changes, for example, in the Kurdish question. The Europeans and Russia are not obliged to participate in the sweeps and the restoration of statehood in the former territories of ISIL, these are local problems. Especially since leaving the “Russian garrison” (conditionally) in each village in an absolutely hostile environment would be a dead-end Afghan option. There is no question of this here. The situation in Syria is a little like the Afghan one.

The functions and tasks of the coalition army, if it includes Russian units, will consist of a series of breakthrough attacks in the direction of the desert from the Damascus area along two or three divergent directions and further pursuit of the enemy. Iraq is the responsibility of the United States. And the region of Iraqi Kurdistan is theoretically and could become the boundary of the division of responsibility.

There is no point in expecting serious military resistance in precisely those areas that are specifically controlled by ISIS. As for “Al-Nusra”, it is enough to surround and isolate them - an ideal way to deal with fortified areas in urban environments.