26 September 2015
9
Special Forces against the submarine sabotage forces and means of the Black Sea fleet (BPDSS) - a unit demanded at all times. The heroism and professionalism of his soldiers was recalled during the celebration of the 47th anniversary of the formation of the detachment. Fighting swimmers, underwater saboteurs ... We know more about them from movies than from real life. But few people suspect that they really exist.


In far away Africa

This happened on the night of 5 on 6 June 1986 of the year in the port of Namibe in Angola. The fact that the Cuban ship “Havana” and two Soviet ships, “Captain Chirkov” and “Captain Vislobokov”, will go there, was known to Cuban leader Fidel Castro and USSR President Mikhail Gorbachev. When ships loaded weapons and ammunition, entered the port, three small groups of saboteurs were assigned the task of scuttling ships and decommissioning the port. They had to blow up the fuel storage, the bridge (thereby interrupting the port’s communication with the country) and the high-voltage power line. Almost all of the saboteurs conceived fulfilled, having blown up three ships. .Havana. overturned, and the Soviet ships were only sunk, blocking the approach to the port pier. From grenade launchers saboteurs shot the fuel tanks and de-energized the port, having blown up four pylons of the power line. The only thing they did not do, for fear of protection, was not to blow up the bridge.

35 day port did not function. This is what the three groups of six trained saboteurs were able to do each. So there are underwater terrorists not only in the movies.

Local authorities undertook to restore the fuel storage and power line. But the most difficult thing was to demine the ships that were prudently flooded at the pier with weapons and ammunition. As it turned out, the mines were with the most perfect mechanism of non-removability. Attempting to remove them from the hull of the vessel at any time threatened an explosion, the consequences of which were terrible to think about. Work such a mine, and two Soviet ships, carrying a total of 22 thousands of tons of ammunition, would have blown up and destroyed not only the port, but also the city.

It was then that the specialists of the Black Sea Underwater Detachment of Combating Submarine Saboteurs, forces and means (PDSS), as it was then called, were called to help. They were the most experienced and combat-ready among similar structures of other fleets. The group was headed by squad commander Captain 1 rank Yuri Plyachenko.

“It was on Saturday,” recalls Yuri Ivanovich. - Called the chief of staff of the Black Sea Fleet. After 15 minutes I had to give information about the composition of the group commanded to Africa. Only volunteers could be sent there. Those were all fighters. I have selected recently returned from military service in Ethiopia. These are people who had experience in a hot climate, tropical waters teeming with sharks, who were able to fight these predators. In addition, they did not need to undergo acclimatization.

Not even all members of the military council of the fleet knew about finding such small groups (one midshipman and three sailors of military service) far beyond the borders of their homeland (they were in the crater of an extinct volcano on one of the Red Sea islands).

The detachment was served by people with excellent health, an appropriate form of tolerance of secrecy, three times checked by the competent authorities, morally stable, well prepared both physically and professionally. They solved the tasks of counter-sabotage provision of our forces and equipment located in different parts of the World Ocean.

After a thorough inspection of the mines, Yuri Plyachenko concluded that it was possible to work on mined ships. It was necessary to first fill the holes, pump out the water, unload the ammunition, and after that deminate the ships. Giving such recommendations and certain guarantees of success, Plyachenko assumed a great responsibility. It is hard to imagine what awaited him in case of failure.

Plan Plyachenko was adopted. The rescue operation began. The calculation of the detachment commander was correct. Mines did not work. But the time has come to neutralize them.

“They were made of titanium alloy,” Plyachenko recalls, “this is a very high-tech production. All recommendations for the disposal of mines were taken into account by their creators, and at first it seemed to take. mines impossible. I had to look for non-standard ways.

We got in touch with Moscow, they definitely recommended there: you know better where you are. Mina with. Vislobokova. Torn off by a counter-explosion. And neutralize mine with. Chirkov. helped ... the shell which grew up during this time. She blocked a very important pin that activates the explosive mechanism ...

This is just one история from the life of the former commander of the detachment, who was awarded three orders, including two Red Star, but she vividly shows the scale and complexity of the tasks that the division was solving at that time. Had to work in Nicaragua, Angola, the Persian Gulf ...

Well, what about today, you ask?

Today the detachment is in demand and strengthened more than ever. This is understandable: the main base of the Black Sea Fleet is deployed on the originally Russian land, in the hero-city of Sevastopol, and now it is not necessary to coordinate with Ukraine the transfer of necessary forces. In addition to special operations and exercises, special forces detachments are constantly on board the Black Sea Fleet ships, departing both for combat services and for friendly visits. Their main task is to ensure the safety of Russian ships while they are parked in foreign ports.

The progenitor of the current special purpose unit is the 102 th PDSS squadron. He worked both in the USSR and beyond its borders, primarily guarding the bases of the Navy. In 1977, on the island of Nokra, in the Dohlak archipelago in the Red Sea (Ethiopian territory. - Ed.), Construction began on a Soviet naval base: combat swimmers were on duty throughout its existence. Another detachment guarded the Soviet ships located in the ports of Mozambique, Angola, Cuba and Nicaragua, cleared the bottom sections in the Red Sea and the Persian Gulf. All operations were strictly classified, information about most of them is not available to ordinary people to this day, although there are exceptions, such as, for example, Angolan.

By the way
For the first time in the Soviet Union, in the 102 squad, dolphins were used to search for saboteurs and alien objects, for which a dolphinarium was built in the Cossack Bay, in Sevastopol. Starting from 1975, the detachment of dolphins went on duty into the water area of ​​the bay together with each 102 detachment. On PDSS, torpedoes and shells were also searched after training shots with the help of mammals. 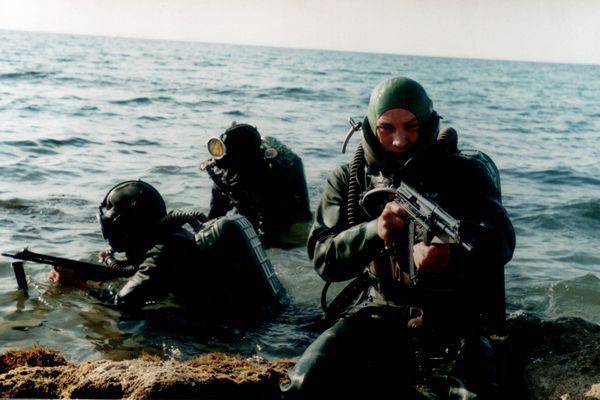 Ctrl Enter
Noticed a mistake Highlight text and press. Ctrl + Enter
We are
Peruvian special forces sniper and Peruvian combat swimmersCombat Swimmers: Warriors of the Three Elements
9 comments
Information
Dear reader, to leave comments on the publication, you must to register.