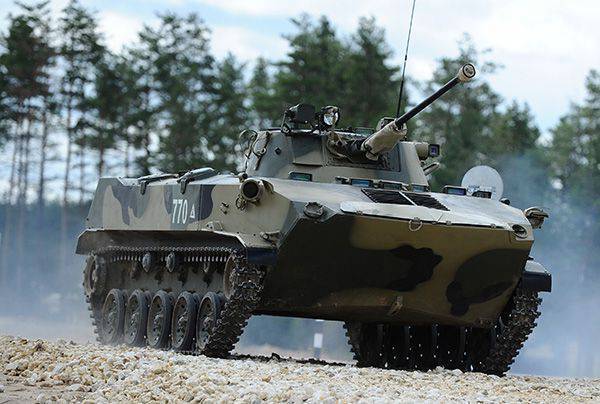 Among the new armored vehicles demonstrated to the general public at the Victory Parade in Moscow in 2015, there were also small, unusually “crazy” transporters with the Airborne Forces emblem on the lower front armor plate. These babies - and against the backdrop of new tanks and BMPs on the Armata platform, or the same BMPs and armored personnel carriers on the Kurganets-25 platform, they really look like younger brothers - they are officially named BTR-MD “Shell”. And this is the first in stories Post-Soviet Russia tracked armored personnel carrier, entering service with winged infantry. It was the incoming: the first batch of 12 armored personnel carriers was transferred to the Airborne Forces two months before the parade - in March 2015 of the year. And just before the end of the year, 62 new cars of this model will arrive in the troops.

Like many modern types of weapons, entering or preparing to be put into service in the last ten years, the Rakushka BTR has a very long and difficult history. However, given the problems that the domestic military industrial complex experienced in the 90, one should be surprised not by the limitations of this story, but by the fact that the car was nevertheless brought up to the series, while seriously changing to meet the requirements of the times.

The first tracked airborne armored personnel carrier BTR-D, produced on the basis of the BMD-1 airborne assault vehicle, entered service with the Soviet airborne troops 40 years ago, in the 1974 year. The car turned out to be very successful, showing itself well in both Afghanistan and later in Chechnya. However, at the beginning of 90-s, it became clear that 20 years of immaculate service is great, but the machine is clearly morally obsolete. Therefore, in 1992, the military issued to designers of the Volgograd Tractor Plant design bureau, which produced the BTR-D, a technical task for a new generation car.

As you might guess, the work on the creation of an armored personnel carrier on this task was greatly delayed. The patent for BTR-MD, that is, the multi-purpose armored carrier landed, was issued 15 March 2007 of the year. The basis for it was the newly created and planned for adoption BMD-4. A year later, the Airborne Command issued a new technical task - to create an airborne BTR based on the new BMD-4М, in fact a heavily modernized BMD-3: the military required unified over many units of the machine. This model, created in the Special Design Bureau of Machine-Building at the Kurgan Machine-Building Plant, received the name BTR-MDM, that is, a modified one. The new model was first presented to the public in 2013, at the Russian exhibition of weapons Russian Arms Expo-2013 in Nizhny Tagil. Shortly before that, the first two vehicles of this model entered the troops for tests, and after the exhibition another ten were added to them. 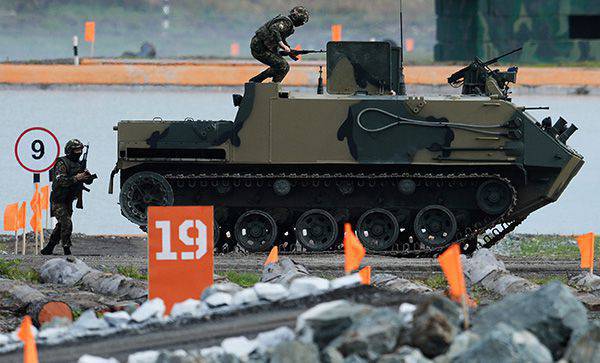 The BMD-4М airborne assault vehicle during paratrooper exercises at the Dubrovichi training ground in the Ryazan region. Photo: Alexander Ryumin / TASS
What is capable of a winged armored personnel carrier

Traditionally, in the Soviet and then the Russian army, armored personnel carriers intended for the transport of personnel were wheeled and infantry fighting vehicles tracked, because in fact they were light tanks of direct support for infantry. The only exception was the Airborne Forces: the wheeled armored personnel carriers of the BTR-60 families could be landed only by landing method or on a special platform. Therefore, the tracked BTR-D was created based on the BMD-1. However, the main difference between infantry fighting vehicles and armored personnel carriers remained here: due to the lightening of the weapons, the troop unit was increased on the machine, which was primarily to transport personnel, rather than support it in the offensive.

This approach has been preserved in relation to the design of armored personnel carriers and infantry fighting vehicles / BMD for the modern Russian army. And since one of the main requirements of the modern armed forces is the multifunctionality of each type of armored vehicles, the designers have taken the path of unification, and even the creation of uniform armored platforms. A classic example of the second option is the platform type &quot;Armata&quot; and &quot;Kurganets-25&quot;. And the first is the choice of BMD-4М, which becomes the main one for Russian airborne troops, as a platform for the BTR-MDM.

The armored personnel carrier differs from its “elder sister” primarily by lighter equipment. The BMD-4M is armed with a Bakhcha-U combat module with two 100 mm and 30 mm guns and a PKN 7,62 mm machine gun. However, due to the placement of the module had to reduce the number of paratroopers on board: only five, plus three crew members. The new BTR-MDM is the opposite: it is armed with only two PKTM machine guns of 7,62 mm caliber with 2000 ammunition for each (one is installed in a remote-controlled installation above the commander’s seat, the second, coursework in the front armor plate on the right, almost at the very side). Due to such a relief, the BTR-MDM is serviced by just two crew members and takes in more 2,5 times the paratroopers - the 13 man.

Another fundamental difference between the BTR-MDM and the BMD-4M is a large number of hatches, allowing the landing force and crew to get into the car and leave it in any conditions. Above the three front seats (in the center of the driver, to the left of his commander, to the right reserve) - three separate hatches classic round shape. Two more, rectangular, located above the seats for the landing and open up and sideways. Plus aft hatch, the widest, which can be used on the move as an armored shield: it opens forward-up, and under its cover, troops can fire from personal weapons.

BTR-MDM &quot;Shell&quot; at the 10-th international exhibition of weapons Russia Arms Expo - 2015 in the territory of the Nizhny Tagil State Demonstration and Exhibition Center of weapons and military equipment

BTR-MDM &quot;Shell&quot; at the 10-th international exhibition of weapons Russia Arms Expo - 2015 in the territory of the Nizhny Tagil State Demonstration and Exhibition Center of weapons and military equipment.

An inexperienced person, perhaps, cannot distinguish the Volgograd BTR-MD from the Kurgan BTR-MDM. The number of crew and assault forces they have the same, the overall layout and design of the machines also do not differ: in the front is the control compartment, in the middle is the amphibious compartment, in the back is the engine compartment. Both cars have the same variable clearance from 100 mm (minimum) to 500 mm (maximum); at the same time the working clearance makes 420 mm. Traffic figures are similar: speed on the highway - 70 km / h, on rough terrain - 45 – 50 km / h, on water (the armored personnel carrier has two jet propulsion) - 10 km / h.

But the characteristics of the engine and crawler propulsion gives them different capabilities. The Volgograd BTR-MD has a chassis from the BMD-4 and the same 450 horsepower engine, and the Kurgan BTR-MDM has an 4 horsepower engine installed on the BMD-500M, which gives it a greater specific power: 34 l. with. per ton of mass against 30 in the BTR-MD. And although the speed of both cars is the same, the Kurgan armored personnel carrier can, for example, be able to start more sharply and turn around more sharply, which can be important in combat conditions. The suspension and tracks of the BTR-MDM are also more reliable than the MD version. There is one more advantage of the machine produced by the Kurgan Machine-Building Plant: a much more substantial mine protection, which in the past few years has been a decisive factor.

As representatives of the Airborne Forces say, in total over the next ten years they should receive at least 250 BTR-MDM of various modifications. And not all of them will be armored personnel carriers intended for the transport of personnel. BTR-MDM was originally designed as a machine, on the basis of which, quickly and without much hassle, you can equip armored personnel carriers for various purposes. It is already known that, in addition to the BTR-MDM itself, the airborne troops will also receive the BMM-D1 armored sanitary conveyor, the BMM-D2 armored medical platoon and the BMM-D3 medical dressing machine on an extended seven-wheel chassis. In addition, on the basis of the BTR-MD, a reconnaissance and control module can be mounted (the landed version received an MPI-D index) from the Barnaul-T tactical link automation equipment set.

Ctrl Enter
Noticed a mistake Highlight text and press. Ctrl + Enter
We are
Tracked armored personnel carrier K-7510 best armored vehicles from the Discovery Channel
23 comments
Information
Dear reader, to leave comments on the publication, you must to register.