24 September 2015
12
Currently holding PGZ ("Polish armory group ”) fulfills an order from the Polish Ministry of Defense for the supply of several hundred Rosomak combat vehicles (“ Wolverine ”), which are a licensed version of Finnish Patria AMV equipment. By the end of the decade, the Polish armed forces should receive about a thousand armored vehicles of several modifications. In addition to assembling new equipment, PGZ is also creating new projects. At the recent MSPO exhibition, several new models of military equipment based on an existing project were shown.


From 1 to 4 September, the international exhibition of weapons and military equipment MSPO was held in the Polish city of Kielce. This event is traditionally the main platform for the demonstration of promising developments of the Polish defense industry, which was once again confirmed by the experts of the PGZ holding. Working on the development of military equipment for its armed forces, the Polish Arms Group proposed several projects for the modernization of existing vehicles. Three versions of new military equipment based on licensed chassis of Finnish origin were developed and presented at once. In addition, during the exhibition they showed already known vehicles and promising weapon systems.

The proposed infantry fighting vehicle Rosomak-M is a modified version of the basic design of the family. In the framework of the new project, it was proposed to use a number of innovations aimed at improving both individual characteristics and overall combat effectiveness. At the same time, some imported components are actively used in the project. 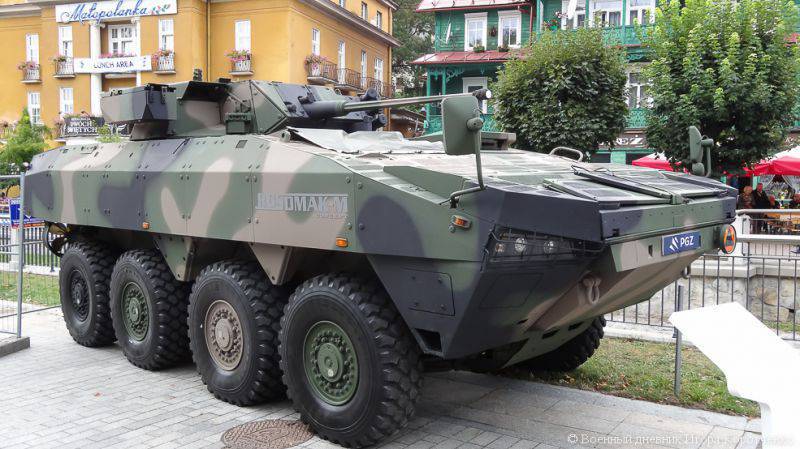 During the development of the Rosomak-M infantry fighting vehicle, it was intended to increase the level of protection of the hull without loss in other characteristics, primarily in mobility. To this end, it was decided to equip the car with a new German-made IBD steel armor. In addition, the hull design has been redesigned to preserve buoyancy. The “Wolverine-M” differs from the base machine with a wider width and increased draft. Such improvements have allowed to maintain buoyancy at the required level. In addition, the combat weight of the vehicle, which provides for crossing the water barrier by swimming, increased by 1600 kg and exceeded 23 t.

Maintaining the maximum speed while driving through the water is provided by some other modifications. So, it was decided to abandon the tool box, located between the third and fourth pairs of wheels. In addition, the design of jet propulsion units located in the rear of the hull has changed. As a result, Rosomak-M retains the mobility of the base machine, both on land and on water.

During the upgrade, Wolverine-M receives an updated Hitfist-30P combat module. This product is equipped with a 30-mm Mk 44 Mod 2 Bushmaster II automatic cannon, a machine gun and launchers for Spike-LR guided missiles. The updated tower retains the layout of its predecessor with a central location of the barrel systems and the launcher on the starboard side. In addition, on the front sheet is a set of smoke grenade launchers. During the modernization of the combat module Hitfist-30P received increased boxes for ammunition, due to which it was possible to increase the number of ready-to-use shells for guns.

Convenience of work, as well as safety of the crew and assault forces are provided by some new equipment. The upgraded BMP received an updated air conditioning system. Also applied new "mine" seats, reducing the impact of the shock wave on the crew and paratroopers.

The Rosomak Battlefield Management System (BMS) communications and control equipment was introduced into the onboard radioelectronic equipment of the new Rosomak-M. With this equipment, the crew must communicate with other armored vehicles, infantry and command.

The second car of the new line - Rosomak-XP with an updated chassis. Apparently, the PGZ holding experts came to the conclusion that it is impossible to further upgrade the existing platform without a serious increase in the weight of the structure. The result was the emergence of a new project, originally adapted for further modernization with increasing mass.

To enhance the performance, Rosomak-XP is equipped with a new Scania DC13 diesel engine with an HP 604 power. For comparison, the existing machinery of the family has engines from 480 to 540 hp. In addition, the project involves the use of a new enhanced suspension. It is argued that the used chassis modifications make it possible to increase the combat weight of the vehicle to 32 t without loss in specific power and mobility. It also provides for the possibility of installing new units on existing types of equipment.

PGZ engineers have already used the existing modernization potential of the new chassis, strengthening the armor of the car. The Rosomak-XP model BMP shown at the MSPO exhibition differs noticeably from the base machine by several innovations. The presented machine received a set of additional reservations, seriously increasing the level of protection. It is alleged that after this update, the machine has a 4 level ballistic protection according to the STANAG 4569 standard. Anti-mine protection corresponds to the 4a / 4b levels of the same standard. Thus, the armor withstands hit of 14,5-mm armor-piercing bullets and protects the crew from explosive devices with a charge of up to 10 kg of TNT under the wheel and bottom.

Due to the installation of the additional booking modules, the machine was about 8 tons - its combat weight reached 30 tons against 22 tons at the base “Wolverine”. Thus, using the potential of the new engine and updated chassis, you can install on this BMP some new equipment weighing up to 2 t without negative consequences for mobility.

The Rosomak-XP project may be interesting to the customer for a number of reasons. First of all, it is the possibility of increasing the level of protection or the use of new weapons, as well as the compatibility of new units with existing equipment. Thus, at the request of the customer, Rosomak machines of other modifications can be converted according to a new project with a corresponding increase in characteristics.

Another version of a combat vehicle based on the Wolverine BMP was created in cooperation with the Belgian company Cockerill Maintenance & Ingénierie. The participation of the latter consisted in the development and delivery of a new combat module with artillery weapons. The project of a fire support vehicle, which has not yet received its own designation, involves the use of the existing Rosomak chassis, on which a new combat module is mounted. 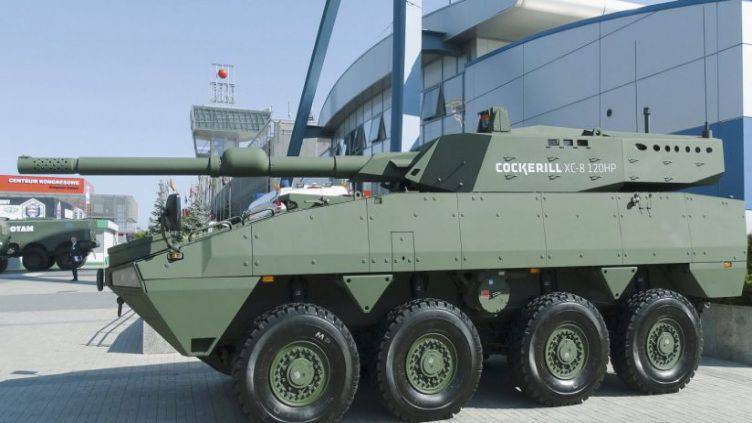 On the roof of the base chassis, it is planned to install the XC-8 120HP combat module with artillery and machine gun weapons. In this case, the main weapon of the machine becomes a smoothbore gun of the caliber 120 mm with a barrel length of 47 calibers. Such weapons in the future will allow the machine to fight with armored vehicles and enemy fortifications, providing direct support to the infantry.

According to the news agency Jane's, Cockerill Maintenance & Ingénierie is currently working on a project for a new combat module with an upgraded 120 mm cannon. This product can be used on various combat vehicles. There is already some information about plans to use this system on a promising Polish fire support vehicle. In addition, it cannot be ruled out that they will try to install a promising combat module on the Rosomak chassis.

The car Rosomak-WRT can not be called fully new. This repair-evacuation machine is well known to specialists and technology lovers. Moreover, it has already become the subject of the relevant order. Over the next few years, PGZ Holding should build and transfer to the 34 troops vehicles of this type with a total value of about 233,5 million zlotys (61,8 million US dollars). During the MSPO exhibition, the first serial copy of the machine was shown. 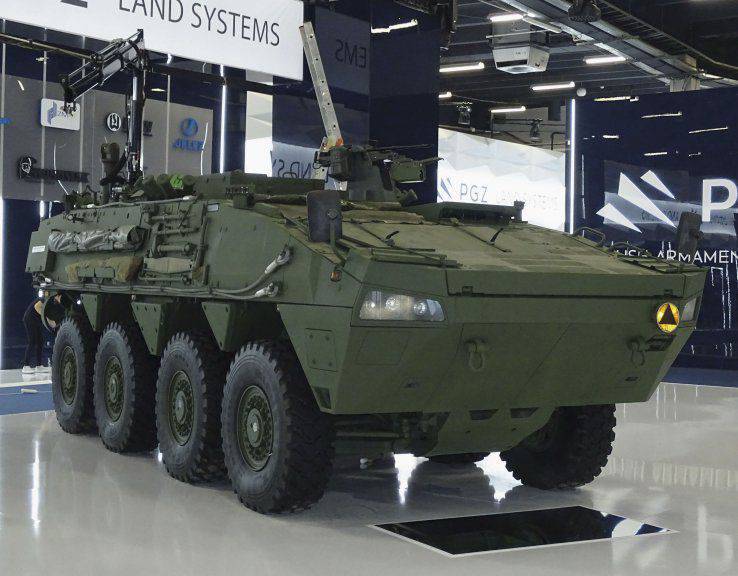 Repair and evacuation machine Rosomak-WRT is designed for maintenance and repair of damaged equipment in the field. In this new machine, despite its supporting role, has one curious detail associated with weapons. After adopting the Rosomak-WRT, it will be the first armored vehicle of the Polish army equipped with a remotely controlled combat module. For self-defense, this machine carries a ZSMU-1276A3 Kobuz system with a URM-2000C machine gun, caliber 7,62 mm. Poland’s other military equipment cannot yet boast such “progressive” weapon systems.

In addition to ready-made machines, in the development of which new ideas were used, a promising uninhabited combat module was shown at the MSPO exhibition. In the parking lot of the PGZ holding, there was a serial "Wolverine" with a ZSSW-30 combat module, which was developed by Huta Stalowa Wola (HSW) and is offered for installation on Rosomak-M2 BMP and other similar equipment. It represents the further development of existing systems using some new ideas and aggregates. 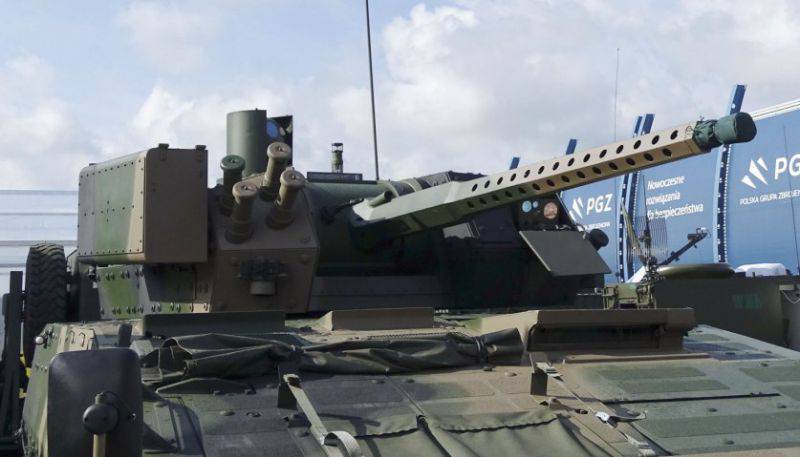 The combat module ZSSW-30 has some similarities with the existing Hitsift-30P, so it can be installed on the Rosomak BMP without modifications to their body. However, in the case of a new development, only the equipment of the module is located outside the armored hull of the base machine. At the same time, the gunner-operator is at his workplace inside the base of the base machine and controls the module using a separate console. The module is equipped with a set of sighting equipment, allowing you to monitor the situation and firing at any time of the day and regardless of weather conditions. The system’s armament consists of an 30-mm automatic cannon, a machine gun and Spike-LR guided missiles. Due to the new sighting equipment and fire control system, it is planned to improve performance in comparison with existing equipment.

To date, the specialists of PGZ holding and HSW have completed the integration of the new ZSSW-30 combat module into the equipment of the Wolverine BMP. In addition, the first test shooting from an automatic gun has already been carried out. The first test launch of the Spike-LR guided missile is scheduled for November. Next year, the HSW plant is to assemble the first pre-production batch of five combat modules. The launch of full-fledged mass production is expected in 2017 year.

Having received all the necessary documentation from the Finnish colleagues, the specialists of the Polish holding PGZ and its member companies continue to develop the armored vehicles family. Until a recent exhibition, seven modifications of Rosomak BMPs were known for various purposes, differing from each other in design and composition of the target equipment. Several variants of infantry fighting vehicles, an ambulance, an armored personnel carrier, as well as a command and control vehicle and a self-propelled air defense complex were proposed.

A few years ago, a contract was signed for the supply of “Wolverine” in various configurations. By the end of the decade, it is planned to build just under one thousand of these machines, which will be used to solve various problems. In the 2014-19, the PGZ holding must build an 481 infantry combat vehicle with cannon and rocket weapons (in two versions - 359 + 122 units), as well as an 516 chassis for use as the basis for other modifications. Details of the distribution of these chassis are still unknown.

Also, the prospects of new armored vehicles, first introduced in early September, remain a mystery. All new projects are of particular interest to a potential customer in the face of the Polish ground forces, but in some cases the machines have not yet passed the full range of tests and therefore are not yet ready for the start of mass production and operation in the troops.

Ctrl Enter
Noticed oshЫbku Highlight text and press. Ctrl + Enter
We are
In the footsteps of the exhibition Eurosatory 2016: trends in the development of armored vehicles. Part of 3KTO Rosomak (part of 4)
Military Reviewin Yandex News
Military Reviewin Google News
12 comments
Information
Dear reader, to leave comments on the publication, you must to register.