22 September 2015
34
Despite the American coalition bombing terrorists "IS", the onslaught of these terrorists against Damascus only intensified. Sergey Lavrov, the head of the Russian Foreign Ministry, drew attention to this strange effect of precision bombing: something is being bombed, but not the Caliphate IG. The latter bombardments are even good. 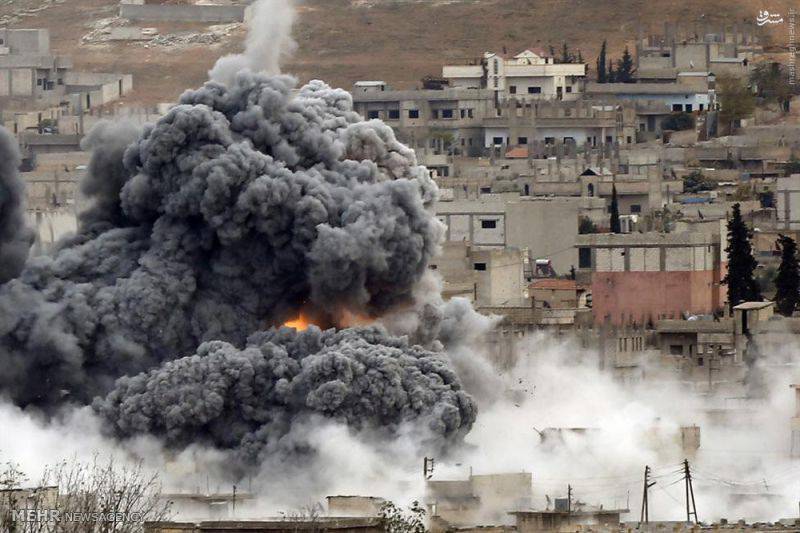 Only the Western world mass media report on the major losses of the Caliphate "IG" from democratic bombing, which is easily explained: they are constantly engaged in composing excusable legends for Washington. And Russia was worried that the matter was going to create a “no-fly zone” over Damascus, because our Western colleagues began to lie, as in Libya. And then the Syrian-Russian naval express has actively earned, so that it promises to call on the territory of Syria altogether.

Surprisingly, the successes of the United States in the struggle with the IG caliphate were expressed in the preparation of 54 militants of the “moderate Syrian opposition”, apparently, they are more “moderately” executing their victims, while the successes of bombing cannot be detected at all, which together suggests that both are fakes. Politicians in the US are debating a completely different question: “How to expel Russia from Syria?” The answer to this banal question is obvious: to do this, you must first expel its legitimate President Bashar al-Assad from Syria, which is what the American coalition actually does.

In general, the question “How to expel Russia from everywhere?” Is the essence of the policy of Washington, that in Syria, that in Libya, and that in Ukraine. And then in the Caucasus, in Siberia and further in Russia - such plans flew out of the most senior American mouths. Therefore, the Syrian-Russian express resolutely hurries to the aid of Bashar Assad.

It is noteworthy that the situation in Syria and in Ukraine is mirrored. In Syria, the United States declared the official legitimate Damascus enemy under the pretext of using force against part of its people, in Ukraine they supported the coup d'état and the new Bandera power that declared war on the Russian-speaking part of the population.

Russia in Syria is supported by official Damascus (against Caliphate terrorists), while in Ukraine, Bandera’s Kiev is denied legitimacy, having recognized it under external American control, and supports rebels. At the same time, Damascus does not announce its plans for a march to Washington, and Kiev speaks of a march to Moscow.

Russia has every reason to believe that Washington has decided to repeat the Libyan scenario in Syria, that is, to give Damascus to be torn apart by the militants of the IG, under the guise of the lies of the world media, as it was in Libya. The world press can compose anything, but Russia will not allow Syria to turn into Libya, especially since Russia and Iran can provide military assistance to Syria, which was impossible to do in a more distant Libya.

It seems that the task of Russia is to nullify the air forces of our Western colleagues, and provide air cover to the Syrian troops, while Iran will help the Syrian infantry. And in this case, we can talk about the coalition Russia-Iran-Egypt, since in Egypt right now began joint exercises of Russian and Egyptian paratroopers.

Judging by the latest maneuvers of Washington, aimed at establishing contacts with Moscow on Syria, he realized that he would no longer be able to establish control over Syria with the help of a caliphate, and completely seize his resources. However, the division of Syria is possible, and Moscow cannot leave it at the mercy of Washington.

From the military situation, it follows that the matter is rapidly moving towards the division of Syria, and Russia must defend the interests of its ally B. Assad and its own, which in this case coincide. For this, a single naval base in Tartus is not enough; it must be air-conditioned with an air force base in Lattakia. This is our answer to the questions of US Secretary of State John Kerry on Syria, and its implementation is also occupied by the Syrian-Russian naval express.

Both the Libyan, and Syrian, and Ukrainian crises inspired the United States, hiding behind democratic neo-Trotsky demagogy. There is no strategy in these crises, so they still can’t find it: the US just destabilizes everything it can reach. Ray McGovern, a CIA veteran who wrote analytical notes for Washington, once said that a group of crazy people had come to power in the White House. These "crazy" are neo-Trotskyists, who have turned the United States into the basis for their permanent revolution, have replaced the myth of "communism" with the myth of "democracy" on a global scale. And it works!

Of course, there are other more pragmatic political forces, anxious to fish in the muddy waters of the “color revolutions”, and thereby delay the global financial collapse — that’s the whole “strategy of spreading democracy” for the United States. However, permanent democrats from Washington are unable to destabilize Russia, despite special efforts. Russia, on the contrary, concentrates, defends its borders, interests, and its allies, including Bashar al-Assad. But Europe has gone Schengen cracks, being between the fires of the Syrian and Ukrainian crises.

What is interesting, today the prophecy of the clairvoyant Vanga begins to come true: “to be empty to Europe!” In the last century, the question was: when world upheavals occur, a new world war, Wanga answered mysteriously: “not soon, Syria has not yet fallen!” Then this prophecy it is not clear, as with the "Kursk, which went under the water." How can Syria be associated with the desolation of Europe? Today it is quite clear that dozens of articles were written about the “Sunset of Europe” as a result of the “invasion of migrants” from the East.

Today, Syria has already fallen, that is, it is divided into three enclaves: the Syrian-Alawite proper, Bashar al-Assad, the Kurdish autonomy and the IG caliphate. The former secular united Syria is no longer there. And hundreds of thousands of migrants flee to Europe. Or storming her?

Moreover, Syrians of them no more than 30 percent, according to experts, but the trigger for the flow of migrants from the Middle East was the fall of a single secular Syria. Europe accepts migrants, and with this comes the road of "emptiness" - unrest and schism, as a reaction to the arrival of vast foreign cultural masses. Is there really somewhere, no one knows where, everything is already known and predetermined?

Ctrl Enter
Noticed oshЫbku Highlight text and press. Ctrl + Enter
We are
Syria: Americans scare themselves, and Asma Asad buys chairsSyria: the rebels do not give up because they do not want to die
Military Reviewin Yandex News
Military Reviewin Google News
34 comments
Information
Dear reader, to leave comments on the publication, you must to register.