22 September 2015
257
Sometimes you catch yourself thinking that a considerable number of Russian lawmakers have too much free time, which they don’t want to spend on developing constructive and effective legislative measures, but willingly spend on self-promotion or even more dubious initiatives. So, the reason for the next thought about the presence of a lot of free time from certain legislators of the two chambers of the Federal Assembly of the Russian Federation, prompted the publication of the information agency TASS, which reported on the initiative of a member of the Federation Council from the Arkhangelsk region Konstantin Dobrynin. 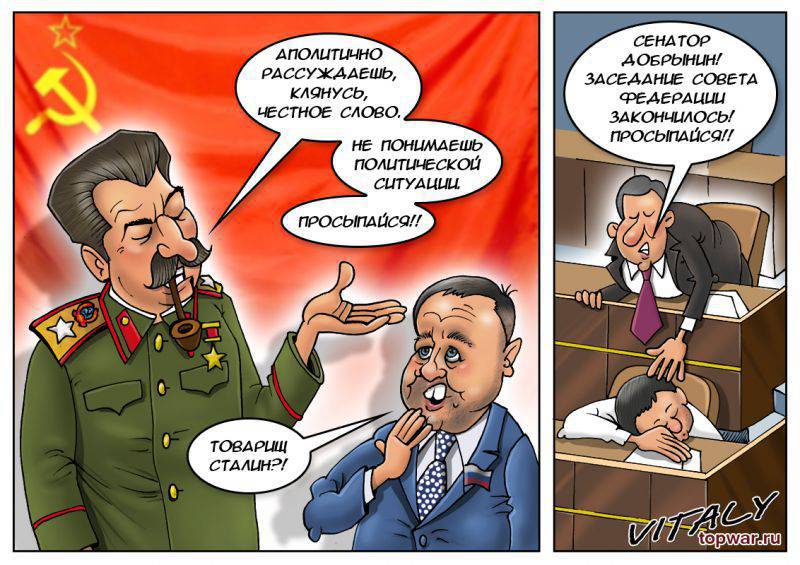 The initiative is that in Russia attempts to "rehabilitate Stalinism" should be equated to "extremism" with all the consequences for the "rehabilitators" in criminal terms. In fact, the Dobrynin initiative sends all those who “rehabilitate Stalinism” either to Article 282 of the Criminal Code of the Russian Federation “Incitement of hatred or enmity, as well as humiliation of human dignity” (maximum punishment is imprisonment for up to 5 years) “Rehabilitation of Nazism” (maximum punishment - imprisonment for up to 354.1 years).

TASS reports that the bill proposed by Senator Konstantin Dobrynin, who is the deputy chairman of the Federation Council’s committee on constitutional legislation and state construction, states that any materials in which “Stalinism” will be rehabilitated should be recognized as extremist materials, as well as materials “rehabilitating persons involved in the crimes of the Stalinist regime. "

A separate line is this:
the prohibition (...) of assigning names (apparently, “Stalinist” - author's note) to new geographical objects.

At the same time, there is a rather vague wording in the draft law that cannot be considered “the rehabilitation of Stalinism”:
(...) denial of the accusation of the political leadership of the Soviet state in carrying out the policy of genocide, committing crimes against humanity, as well as in carrying out any other actions that have not been subject to official state condemnation, is not a denial of the crimes of the Stalinist totalitarian regime and is protected by constitutional norms of freedom of speech and freedom of expression.
The author of the bill:
It is reliably known that from 1921 to 1953 more than 4 million people were convicted of "counter-revolutionary crimes", including nearly 800 thousand sentenced to death. It becomes obvious that the Stalinist repressions were unprecedented in scale and affected the entire Soviet society as a whole. But in recent years, idealized, one-sided, not appropriate, has been increasingly promoted among the population historical reality is the image of the Stalin era, which "causes enormous damage to the Russian state and society.

Yes, obviously, obviously ... Or just as "obvious" as for certain individuals, "Stalin's crime in terms of unwillingness to evacuate people from Leningrad before the blockade is obvious." We remember the Dozhdin poll ... Or it’s just as “obvious” as the fact that Stalin “was ready to go to war first, just Hitler beat him a little”. Or about "one rifle for three" and "General of the Frost" ... Here we recall the famous words of the writer Sergey Dovlatov:

We endlessly criticize Comrade Stalin, and, of course, for the cause. And yet I want to ask - who wrote the four million denunciations?

Apparently, for this phrase today Dovlatov could be brought in if the initiative of Dobrynin was suddenly approved ...

For some reason, after this publication on the TASS pages of information about the senator Dobrynin’s initiative, the “bright image” of Lia Akhedzhakova stood up with her systematic calls to “repent!” Apparently, Mr. Senator Medzhidovny is haunted, and therefore he decided to use his legislative potential not to develop documents that would improve the economic system of the country, the social sphere, develop national security, and for its own PR company. After all, frankly, the senatorial corps is no different publicity, and here the senator has such a chance to declare himself, and even to please the ultra-liberal public, and foreign too. Like, ah yes, senator, ah yes he poured these "quilted jackets, colorads, rashistam" ...

So what does the senator suggest? It turns out that if any of the historians, publicists, journalists publish declassified archival documents or based on this will prepare articles that the repression of 30-40-x is, undoubtedly, terrible, but rumors about MILLIONS shot and tortured in the basement of the NKVD too exaggerated by all sorts of Svanidze and other "non-living specialists", then such people, by definition, fall into the number of criminals?

I remember, not so long ago, your humble servant published material on concentration camps in the stateswhere the US authorities drove hundreds of thousands of Japanese during the Second World War - American, by the way, citizens. Then, in the camps, tens of thousands of people died from hunger, cold, and hard everyday work. And the material talked about the fact that the Russian authorities have already admitted the fact of Stalin’s repressions a hundred times, rehabilitated their victims with full restoration of rights, but Washington does not show a desire to go the same way in relation to the repressions of the 40s in the United States. But the US authorities have a new and new desire to put pressure on Russia to identify Stalinism and Nazism in our country. It is noteworthy that not a single senator showed up in Washington, who would call for a trial of denying repressions against Japanese citizens during World War II. It won't even occur to anyone, since in the USA they solved this problem, well, quite simply - archdemocratic - they simply don’t write about it in textbooks ... They say they know less - sleep better ... We also have about repression 30-40 In the USSR, thousands of volumes of the most diverse literature came out (with a peak during the perestroika and post-perestroika period), they write about it, they say, they tell the younger generation, but no one, thank God, forbids citizens themselves to explore data on the real volumes of Stalinist repressions and do findings. It turns out that this material, on the basis of Senator Konstantin Dobrynin’s bill, also seems to fall under the “rehabilitation of Stalinism” - well, a comparison was made and no fewer facts of repression in the USA were pointed out, the authorities of which are clearly far from repentance only, by the way, in relation to the Japanese ...

By the way, why is it proposed to judge only for "denying Stalinist repression." Why not expand this bill by “the crime of denying the repressions of Ivan the Terrible, Peter the Great (what are you looking for! - he cut beards to the boyars, - herod ...), Nicholas I (repressed the Decembrists ...), etc. Then it would be possible to send half the country to the bunk, and, as a result, Senator Dobrynin could himself go down in history as the author of a new wave of repression in Russia ... 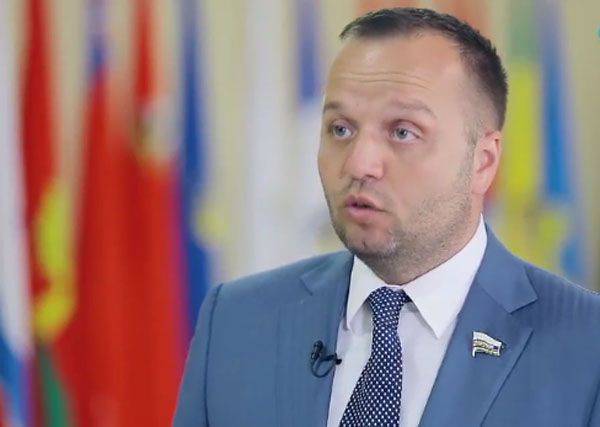 By the way, most recently on «Radio Svoboda» there was also material about another “remarkable in all respects” initiative of the same senator. Konstantin Dobrynin called on “different social groups” to discuss the issue of the rights of representatives of the Russian LGBT community and the possibility of homosexuals (lesbians) to create married couples. From the statement of Dobrynin:

I believe that Russia sooner or later will have to solve this problem. The last thing a state should do is turn away and pretend that there is no acute issue, that everything is all right, that the minority is satisfied with everything, that there are no issues in the relationship between the majority and the minority. It is worth thinking about such issues in advance, starting some kind of adequate legal discussions. But we have something completely different: the level of aggression in the relations between the minority and the majority on this issue goes off scale, calm conversation is impossible. Now, it seems to me, that very moment has come when the tone becomes even more important than the content. The calmer we begin to discuss the controversial issues, the more optimal solution can be found. In what form it will be, I am not ready to say now, I do not have an answer to this question - what will be the norm, whether homosexual relations will be legalized in the form of marriage. Marriage is not the only legal form that can govern this relationship.

In general, the senator is concerned about someone's denial of the repressions of 30-40 in the USSR, as well as the infringement of the rights of the LGBT community ... For the denial of the possibility of registering marriages between homosexuals will also be planted? ..

It is noteworthy that the senator began to formulate his concerns vividly in the year of the completion of his powers as a senator. If you believe the help of Sovfed, the powers of Konstantin Dobrynin as a senator from the Arkhangelsk region expire already this month. Hence the activation? ..

Ctrl Enter
Noticed oshЫbku Highlight text and press. Ctrl + Enter
We are
Results of the week. "It is a sin to laugh at sick people"Is there a solution to the problem of patriotic education of young people? Private initiatives
Military Reviewin Yandex News
Military Reviewin Google News
257 comments
Information
Dear reader, to leave comments on the publication, you must sign in.