23 September 2015
43
We thought and thought American strategists, and decided: we don’t need to think further, everything was invented by the Russians. "Top" news the last days were reports of the likely support of the White House of Moscow, which helps Syria fight the "IG". Washington is ready to provide Russian intelligence data. In fact, we can talk about some restoration of contacts between the United States and the Russian Federation. The West is to blame for the bloodshed in Syria and in Ukraine, some analysts say, and Putin has the key to a breakthrough. 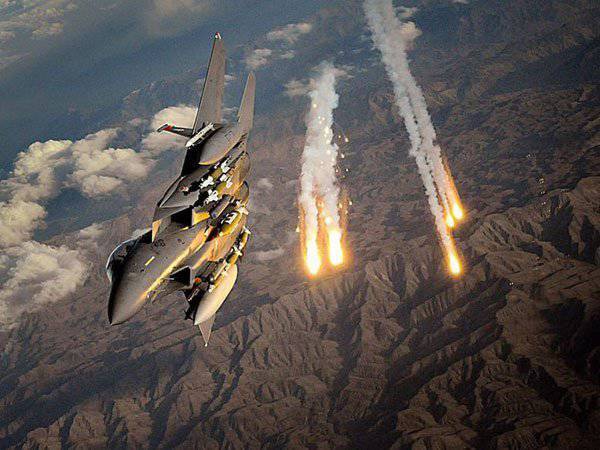 The European press acknowledges that Washington is ready to cooperate with Russia in the fight against the "Islamic State". This is what German publications “Bild” and “Spiegel” write about. "The situation in Syria is so dead-end that Washington is redefining its course and goes on to the fact that just a few weeks ago it was impossible to imagine: it negotiates with Russia at the diplomatic and military level," the newspaper quoted Spiegel magazine "Sight". The German edition reminds that earlier, due to the Ukrainian crisis, Washington’s dialogue with Moscow in the military sphere was frozen.

Spiegel writes that Barack Obama is under strong pressure from his opponents in the United States. Some critics of the course of the White House say that Washington should not interfere in the affairs of Syria, while others, on the contrary, believe that American participation is insufficient. But both sides agree that the American plans to inflict airstrikes on the positions of "IG" failed, said RIA News". The restoration of contacts between the States and Russia is a sign that the United States realized: the war in Syria cannot be stopped without the help of Moscow.

“Russia’s goal was to force the United States to negotiate.” On this front, Putin has been successful, ”says political analyst Dmitry Trenin, head of the Moscow Carnegie Center.

True, it is not clear whether cooperation will follow the restoration of contacts. The political scientist admits that the two sides just do not want to "in vain create obstacles to each other in Syria."

According to the Italian edition “L'Opinione”, quoted by the newspaper "Sight"Europe will soon forget about Ukraine for the sake of the victory over the “IG”: after all, the Islamist victories in the Middle East force us to reshape the world agenda.

As Vzglyadu said, the editor-in-chief of Arsenal of the Fatherland magazine, Viktor Murakhovsky, “the military are pragmatists, they see what is happening in the Middle East. They understand that without the support of Russia, it is impossible to crush the IS. The US Department of Defense is interested in cooperating with Russia regarding different regions of the world. ”

In a British newspaper «The Independent» An article appeared by analyst Kim Sengupta under the catchy headline: “The West is to blame for the Syrian and Ukrainian bloodshed, and the key to a breakthrough lies with Putin.”

According to the author, in two wars by “alien hands” in which the West participates, major changes have occurred. The ceasefire agreement in eastern Ukraine is now holding, and there is a glimmer of hope for a peaceful future. New efforts have been made to resolve the Syrian crisis.

Russia also participates in these wars, the analyst notes, and currently holds a strategically strong position. The frozen conflict in the Donbas benefits the Kremlin, and in Syria, Moscow openly increases its military presence, while at the same time taking the lead in diplomacy.

Ukraine has now faded into the background for the West, since the conflict in Syria has led to the intensification of the IS and the emergence of numerous refugees in Europe. European politicians are to blame for this chaos. Britain played a leading role in the 2003 year in the invasion of Iraq and military intervention in Libya. David Cameron, recalls the analyst, actively advocated the bombing of Libya. Later, he was the first to make the call “Assad should leave,” but at that time, perhaps, the conflict could be settled by peaceful means. The aggressiveness of the West and its inability to strive for peace led to the war in Syria, which claimed 220.000 lives, and seven million people left homeless. More than four million refugees left the country. And now Europe is paying for its mistakes.

What to do? Now, the West is considering Russia, whose proposals, with an offended mien, rejected three years ago as a state that can play a “key role” in the search for a Syrian solution. Former British and American military leaders are calling for an alliance with Russia and even for finding mutual understanding with B. Assad in order to jointly fight IS.

Meanwhile, V. Putin, reminds Sengupta, showed that Russia will support the ruling regime in Syria. “Without the active participation of the Syrian authorities and the military, it would be impossible to expel the terrorists from this country and the region as a whole,” the Russian president said. “Without Russia's support for Syria, the situation in the country would be even worse than in Libya, and the flow of refugees would be even greater.”

According to the analyst, the President of Russia now holds all the trump cards.

Reviewer MIA "Russia Today" Rostislav Ischenko described "Free Press" his vision of the situation: “Assad himself said that he could leave if the Syrian people wanted it. The will of the people can be determined in elections, but it can be so simple - on a whim. That is, Assad at any time may decide that in the interests of the Syrian people he should leave. However, during the civil war, the leader of one of the parties almost never leaves. Such a move would lead to demoralization and surrender. Hence, the war must either end in a compromise peace, or someone else's victory. Russia, except for a compromise world (which is less and less possible), is satisfied with the victory of Assad. Should I leave the winner? I do not think.

To the question of the journalist “According to the author, Russia openly increases its military presence in Syria, while the protests of the American side about this are rather sluggish. Why? And if Russia began to build up its military presence in Ukraine? ”The expert answered very simply:“ Because the United States understands that they are unlikely to be able to persuade the EU to anti-Russian sanctions for the war against ISIL. As for the situation with Ukraine, they are incomparable. Syria is an ally of Russia, and military aid is carried out at the request of the legitimate authorities, and “building up the military presence” in Ukraine means war with Kiev. This option, of course, cannot be completely ruled out, but a direct parallel with the situation in Syria is incorrect. ”

Recall in conclusion that last Saturday, the head of the US State Department, John Kerry, addressed the leaders of Russia and Iran with a proposal to convince Bashar Assad to sit down at the negotiating table to resolve the Syrian conflict. “We must begin negotiations. This is what we are waiting for, and we hope that Russia and Iran and other influential countries will be able to help, ” сказал Kerry meets with British Foreign Secretary Philip Hammond.

This statement was made by John Kerry the next day after a telephone conversation in which two defense ministers participated: Ashton Carter and Sergei Shoigu. The situation in Syria was discussed.

Until now, Washington has not publicly made such cooperation proposals to Moscow and Iran (allies of Damascus). It is likely that the hegemon’s policy in the Middle East is changing. There are several factors at once: air strikes of a coalition led by the United States did not lead to victory over IG; in the United States, the scandal about the “combed” intelligence reports on the activities of ISIS is growing (probably, Petangon, underestimating the problem, tried to put its actions in front of Obama in a favorable light); Russia openly supplies Assad weapon and technique. In such conditions, the “key” is really located at the Kremlin, and the White House has to take this into account. It is impossible not to take into account: if the White House keeps silent, Syria, Russia and Iran will do without it. And this is something Washington cannot allow - it is tantamount to a complete fiasco in the Middle East and even the loss of the status of a world hegemon.

Observed and commented on Oleg Chuvakin
- especially for topwar.ru
Ctrl Enter
Noticed oshЫbku Highlight text and press. Ctrl + Enter
We are
Results of the week. "It is a sin to laugh at sick people"Results of the week. "Of course, he is guilty, but he ... is not guilty ..."
Military Reviewin Yandex News
Military Reviewin Google News
43 comments
Information
Dear reader, to leave comments on the publication, you must to register.