ZSU on the basis of tanks

In the 1947, in the USSR, under the direction of designer V. G. Grabin, they began to develop a twin X-NUMX-mm automatic anti-aircraft cannon C-57, developed on the basis of C-68 and designed to be mounted on a wheeled or tracked chassis. At the same time from the wheel version of the installation refused, leaving only the tracked. The middle tank T-60 was taken as a base, the vehicle was named the 54 product, and in the army classification ZSU-500-57.

The ZSU-57-2 was a light-armored tracked vehicle with a rotating turret, which allowed circular anti-aircraft fire from automatic guns. The armored corps was divided into 3 units: control, combat and power. Office management was located on the left in the bow of the hull. It was located the place of the driver. The fighting compartment was located in the middle part of the hull and in the tower, the power compartment was located in the stern and was separated from the combat by a special armored barrier. The hull was welded from light armor plates 8-13 mm thick. The crew consisted of 6 man: driver, commander, gunner, gunner-installer of sight, two loaders for each of the guns, all of them except the driver were placed in the tower. 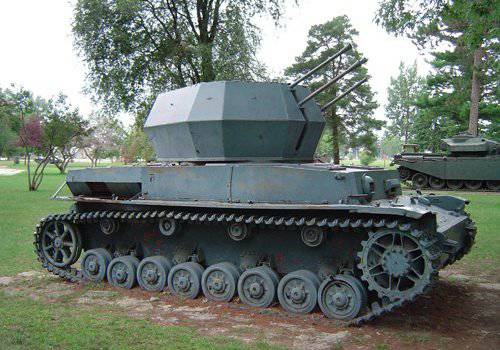 German ZSU "Wirbelwind" of the Second World War
The top-open tower was welded and was placed on a ball support above the notch of the turret roof sheet. To install the guns in the front of the hull were 2 embrasures. The rear wall of the tower had a window for ejection of liners and was made removable, which facilitated the installation of guns. In the stowed position on top, the tower was closed by a folding canvas awning, in which 13 plexiglass viewing windows were mounted.

The automatic twin gun C-68 consisted of two C-60 type guns with the same device. In this case, the details of the right machine gun were a mirror reflection of the details of the left one. The principle of operation of automation was the use of recoil energy with a short recoil of the gun barrel. Their practical rate of fire was 100-120 shots on the barrel. However, in practice, the duration of continuous shooting was 40-50 shots, after which the guns had to be cooled.

The twin gun was equipped with an automatic, anti-aircraft sight of the building type. This sight was designed to solve the problem of determining the meeting point of a target with a projectile during firing. For this, it was first necessary to determine and enter the following data into the sight: target speed (determined by the type of aircraft), course angle (determined by the apparent direction of movement of the target) and slant range (determined by eye or using a rangefinder).

The ammunition of the anti-aircraft guns consisted of 300 cannon unitary shots, which were placed in special combat packs in the hull and turret. Most of the ammunition (248 shots) before loading into the ZSU was loaded into cages and placed in the turret (176 shots) and the nose of the hull (72 shots). The remaining 52 rounds were not loaded into cages and were stored in a special compartment located under the rotating floor of the tower. Shots equipped with clips with armor-piercing shells were placed in the rear of the turret to the right and left of the cannon. Feed clips to the guns was carried out by loaders in manual mode. 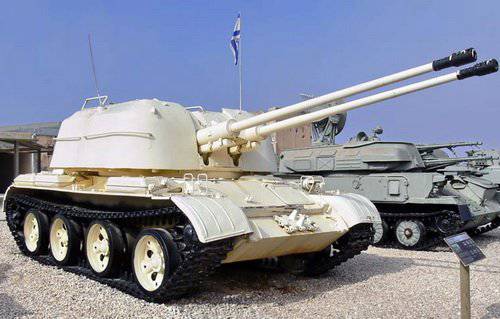 ZSU-57-2
ZSU-57-2 was equipped with a 12 cylinder, V-shaped, four-stroke, diesel engine liquid cooling. Diesel developed power in 520 HP. and accelerated the installation on the highway to 50 km / h. The engine was installed perpendicular to the longitudinal axis of the ZSU on a special pedestal, which was welded to the bottom of the case. Engine capacity was equal to 38,88 liters, and its weight was 895 kg.

The car was equipped with 3 fuel tanks with a total capacity of 640 liters, the tanks were located inside the case. Additional external tanks with a capacity of 95 of liters were installed on the right along the course of the ZSU on the track shelf, the power reserve was 400-420 km. on the highway. Manual transmission with a step change in gear ratios was in the rear of the hull. It included a five-speed gearbox, main friction clutch for dry friction, two planetary rotation mechanisms, two final drives, and compressor and fan drives.

In the early 60s of the last century, the Bundeswehr became interested in the possibility of creating a new ZSU, which would be able to combat aviation the enemy at any time of the day. During the development, the designers and the military opted for a modified chassis of the Leopard-1 main battle tank and a twin 35 mm gun mount. The created 5PZF-B combat vehicle also appealed to the armies of Belgium and the Netherlands. As a result, the Bundeswehr ordered 420 ZSU 5PZF-B Cheetah, the Netherlands 100 5PZF-C, equipped with their own radar, and Belgium 55 cars. 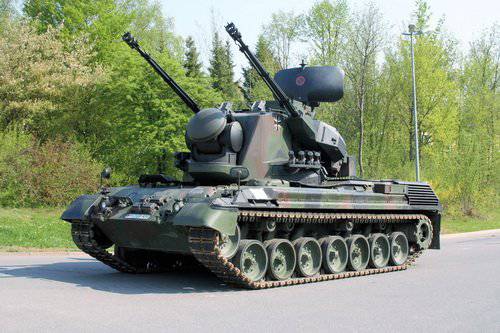 ZSU "Cheetah"
The ZSU “Cheetah”, which has a paired 35-mm anti-aircraft gun, was designed to combat low-flying aerial targets at inclined distances from 100 to 4 000 m. And at altitudes up to 3 000 m. /with. The installation can also be used to combat ground targets at a distance in 350 400. The ZSU is intended to cover the mechanized parts of the Bundeswehr on the march in open areas with difficult terrain. The chassis of the tank "Leopard", which was the basis of the "Cheetah." The ZSU was commissioned in the 4 year.

Corps ZSU "Cheetah" was similar to the case of the main battle tank "Leopard 1", but had a lightweight booking. The main difference was the installation of an additional 71 kW motor, which was used to power the electrical installation. The driver's seat was located in front of the right, to the left of it there was an auxiliary power unit, the tower was located in the center of the hull, and the MTO in the stern. The car had a torsion type suspension, consisting of 7 dual track rollers and 2 supporting, guide and driving wheels in the rear. Search radar mounted in the back of the tower, if necessary, could be folded. The target tracking radar is located in front of the tower.

The “Cheetah” artillery unit consists of two Oerlikon KDA 35-mm guns and a dual-feed power mechanism that allows you to fire various types of projectiles. The guns are mounted in a circular rotation bachet and can be induced vertically in the sector from -5 ° to + 85 °. The drive of the guns is completely electric, but in case of failure, there are also mechanical pickup drives. The overall rate of fire of the installation is 1100 rounds per minute (550 per barrel).

Each gun has a special sensor that measures the initial velocity of the projectile, then transmitting this data to the onboard MSA. The ammunition installation consists of 680 shots, of which 40 are armor-piercing. In order to change the type of ammunition, the gunner needs only a few seconds. Cartridges when firing are removed automatically. The gunner can independently set the required shooting modes and fire single shots, either in bursts of 5 or 15 shots, or in a continuous queue. When firing at air targets, the firing range does not exceed 4 km. Additionally, ZSU "Cheetah" is equipped with two blocks of smoke grenades (4 grenade launcher in each), which are mounted on the sides of the tower. 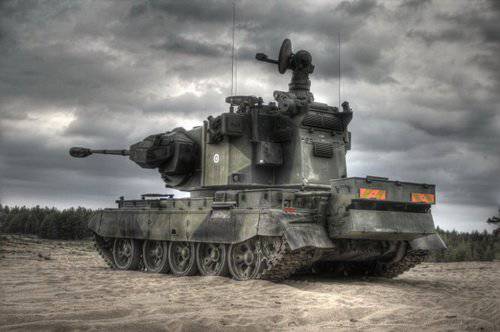 ZSU T-55 "Shooter"
The Cheetah is equipped with two radar stations — the MPDR-12 target detection station and the Albis target tracking radar. The range of their action is 15 km. In the second half of the 70-s of the last century, a new version of the MPDR-18S radar targeting radar was also developed in Germany, which has a detection range in 18 km. Both radars operate independently of each other, which allows independent tracking of the target selected for the shelling and the search for new air objects. For firing in conditions of strong electronic suppression, the commander and gunner of the vehicle have optical sights with 1,5 and 6 multiple magnification.

After the target appears on the screen, it is identified. In the event that it is a plane, then a radar tracking targets, located on the tower. If necessary, this radar can be deployed on 180 °, thus covering it from the impact of fragments. Targeting guns at the target occurs automatically, at the moment when the target enters the affected area, the ZSU crew receives the appropriate signal and opens fire, this mode allows you to save ammunition. It takes 20 to 30 minutes to fully reload the gun shops.
ZSU "Cheetah" is equipped with navigation equipment, communications, means of anti-chemical and anti-nuclear protection, as well as a mechanism to automatically bring the car from the marching to the combat position. Some of the ball machines are equipped with laser range finders from Siemens.

ZSU T-55 "Strelok" was born as a result of close cooperation of several well-known European companies. This system was fully developed by the Italian company Marconi, which in particular supplied its own radar for this ZSU. As the main armament were used Swiss 35-mm automatic guns Oerlikon, the same installed on the German "Cheetah". The base for the ZSU was the Polish-made T-55AM tank. In the Finnish army, this ZSU received the ItPsv 90 index, where 90 is the year when the ZSU was put into service. The machine is considered to be quite effective, the percentage of the destruction of its targets is estimated at 52,44%, which is a very high rate for such machines.

The concept of the combat module used on the ZSU was developed in the UK in the 90 of the last century. This module could be installed on the chassis of the Chieftain, but the British Army did not need such a ZSU. At the same time, the created module could be installed on a vast number of different tank chassis: the new Challenger, the export Vickers Mk3, the old Centurion, the American M48, the German Leopard 1, the Soviet T-55, the Chinese Type 59 and even the South African G6. But only the version with the installation on the chassis of the Polish modification Т55 - Т55АМ turned out to be in demand. Finland has ordered 7 machines for its army. 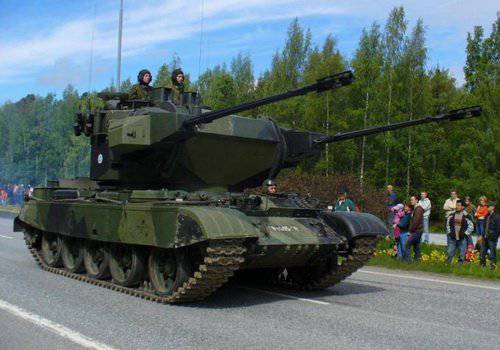 ZSU T-55 "Shooter"
The main purpose of the ZSU T-55 "Shooter" is to fight low-flying aircraft, helicopters and UAVs of the enemy. The effective firing range is 4 km. At the same time, Marconi's radar is able to detect targets at a distance of 12 km, track them from a distance of 10 km, and from km 8. Include a laser range finder. The rate of firing of guns is 18 shots per second (9 shots per barrel). In addition to the main armament, each ZSU is equipped with 8 smoke grenade launchers.

In addition to the fight against air targets, the installation is able to hit and lightly armored ground targets, for this purpose in its ammunition there are 40 armor-piercing shells. The total ammunition ZSU T-55 "Shooter" consists of 500 shells. The created machine turned out quite difficult. It significantly surpassed its donor - the medium tank T-55. Unlike the T-55AM, which weighs 36 tons, the ZSU – 55 “Strelok” has a mass of 41 tons. The increase in the mass of the machine forced the developers to force the engine to 620 HP. (The rated power of the T-55AM is 581 hp).