Syrian crisis: why Washington does not understand Moscow

22 September 2015
43
Russia made it clear that it will participate in resolving the Syrian crisis. And she showed that she could take this step without a nod from Washington. The White House is alarmed: how to respond to such behavior in Moscow? Earlier, strategists in Washington believed that with the Russians it was possible to agree on the issue of “fighting terrorists” in Syrian territory; you can even include them in the "coalition". However, these hopes have now collapsed. Military experts admit that the coalition will create Russia, Iran and Syria. At the same time, the “Afghan scenario” for Russia is rejected. 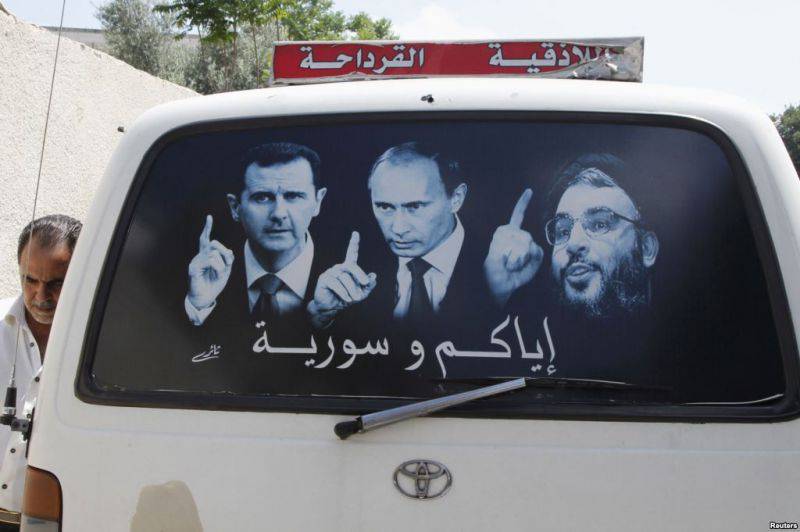 On the Bloomberg View A new article appeared by Leonid Bershidsky, a famous columnist (Leonid Bershidsky), in which he wondered about the divergence of the US and Russian positions on the Syrian crisis.

When Russia made it clear that it would not remain aloof from the Syrian conflict, the American strategists realized that they would have to give the Russians a reply. The situation is familiar: for many years the United States has been responding to every unilateral action of Russia, forgetting to admit that the two states are on opposite sides of the conceptual dispute over the nature of sovereignty.

For Russia, sovereignty is a traditional concept, dating back to the Treaty of Westphalia, which put an end to the Thirty Years War (1648). According to his provisions, the state has complete power over its territories; external factors have no right to interfere in the affairs of a sovereign state.

The European states and the Obama administration in the United States adhere to a different, later concept, ostensibly based on universal human values: if the regime oppresses citizens, it is acceptable to intervene.

The journalist quotes Charles Ziegler’s commentary from the University of Louisville. He wrote in his article (2012) about the Russian concept of sovereignty: “Europe is gradually shifting, if not already, from the traditional concept of the modern state to the postmodern concept of limited sovereignty with its priority of humanitarian values. Russia, like China, largely adheres to the modernist principles of government, based on the Treaty of Westphalia and considering sovereignty as an almost absolute concept. European cosmopolitanism, as if responding to this, interprets the modernist interpretation of sovereignty as outdated and even barbaric. The United States lies somewhere between two types of sovereignty, far apart from each other throughout modern and postmodern ... ”According to Ziegler, if Western realists and isolationists stand closer to the first concept, then the liberals and neo-cons generally share the second.

According to Leonid Bershidsky, at the level of instincts, the European (and recently American) approach seems to be “more attractive”. After all, "for dictatorial regimes, for example, for the regime of President Vladimir Putin in Russia, it is natural to defend absolute sovereignty." The columnist points out that such an approach is useful “for self-preservation” of the regimes, although this preservation does not necessarily take into account the interests of citizens. In addition, "postmodern" sovereignty is based on a much later international consensus than the Treaty of Westphalia.

The observer recalls that in 2005, the United Nations General Assembly adopted a resolution affirming the “responsibility to protect”. This principle allows the international community to use any suitable means to protect a country's population from a regime that arranges ethnic cleansing or commits war crimes.

The reality, however, turned out to be much more complicated.

“Responsibility to protect” has become a subject of heated debate. Many countries, including China and Russia, considered that this principle looks more like a “preventive doctrine”. “Responsibility to protect” was first applied in practice to justify armed intervention in 2011 in Libya’s affairs (against the regime of Muammar Gaddafi). Russian Prime Minister Putin called the intervention of the West in the affairs of Libya "crusade" against a sovereign country. The actions of the West, despite the disagreement of Putin, were approved by the then Russian President Medvedev, and this case was the only act of disobedience of the “weak president” to Putin, the analyst believes.

Meanwhile, the columnist believes, even though Putin claims that the humanitarian catastrophe in Syria is the result of Western intervention, his hidden purpose is easy to see - it is self-interest. Moscow supplies Assad weaponwhich "killed thousands of Syrians." But this corresponds to the principle that external factors do not have the right to try to change the ruling regime in a sovereign country.

On the other hand, it can be argued that Putin himself does not comply with the principles of his concept. The columnist cites as an example the "military adventures of Russia in Georgia and Ukraine." He also recalls Putin’s “official explanation”: Russia's intervention in both cases was a response to the previous intervention by the West - after all, it contributed to the illegal regime change in two post-Soviet countries.

According to the author, there is no doubt that Putin defends his own pragmatic interests - both in the post-Soviet space and in the Middle East.

But what else is interesting. Be that as it may, Putin defends a clear concept of foreign policy, while the United States and its allies with their own pragmatic interests adhere to a “vague” policy.

The analyst sees only three approaches to resolving the ideological conflict between Russia and the West.

The first: military and economic opposition of the West with Russia. In this scenario, Russia's geopolitical position "will not matter."

The second is the achievement of an agreement by the great powers on new rules for an international settlement. This will mean the development (probably under the auspices of the UN) of very limited and concrete measures of international intervention. This, of course, is an idealistic variant, the author writes.

Third, the most likely option: each new incident is considered as a separate situation with its consequences (Realpolitik). This to some extent reflects the approach to Ukraine: Putin was allowed to take the Crimea; Western negotiators forced Ukraine to accept the special status of those territories that are currently "under the control of Russian representatives." In Syria, this may mean a situational alliance with Russia against the "Islamic State", and then backstage negotiations either on the division of the territory of Syria, or on the gradual removal of Assad from power. This is unlikely to bring fame to the West, but still this approach is preferable to “endless diplomatic and military escalation,” the columnist said.

The first scenario is “negative.” Despite Russian military-technical assistance, President Assad is unable to keep control of the situation. In the face of the threat of the fall of Damascus, Russia is forced to evacuate the embassy, ​​the mission personnel of the main military adviser and Russian citizens living in Syria.

The second scenario is “positive.” An international coalition is being created, receiving a mandate to fight the IS from the UN Security Council. In the framework of participation in the coalition, the Russian Federation will limit itself to using its long-range aviation. Russian troops do not participate in ground operations; these functions are performed by the Syrian armed forces, the Iranian army and the IRGC. As for the land operation in Iraq, it is carried out by Western members of the coalition and the monarchy of the Persian Gulf.

Finally, the “realistic” scenario. The task of keeping Assad in power is being solved by Russia and Iran. “And here I don’t even venture to describe possible options for action — there are too many of them,” the expert writes. “One thing is clear: a repetition of the Afghan epic in Syria, with the large-scale introduction of our troops there, in my opinion, is completely ruled out.”

To this we must add that, at present, the Syrian army has begun to use new types of aircraft and ground weapons provided by Russia.

September 17 Syrian Foreign Minister Walid al-Moualem saidthat Russia has provided his state with new weapons and instructors for the training of troops. Damascus, he said, is ready to call on the Russian military to fight as part of the Syrian army, if necessary.

According to an unnamed source of "Reuters" in the Syrian army, the Russian military support for Damascus is increasing, and the weapons "are very effective and very accurate."

Observed and commented on Oleg Chuvakin
- especially for topwar.ru
Ctrl Enter
Noticed oshЫbku Highlight text and press. Ctrl + Enter
We are
Results of the week. "It is a sin to laugh at sick people"Syria: Americans scare themselves, and Asma Asad buys chairs
Military Reviewin Yandex News
Military Reviewin Google News
43 comments
Information
Dear reader, to leave comments on the publication, you must to register.