Poroshenko again told that he would return the Crimea, the Donbass and ensure the investigation of the case of executions on the Maidan

21 September 2015
54
Poroshenko named the factors that, in his deepest conviction, will help bring peace to the land of Donbass. These factors, oddly enough, is not the withdrawal of Ukrainian troops and not the disarmament of the Nazi battalions sponsored by the Ukrainian oligarchs and Western countries, but something else. In the opinion of Poroshenko, “complete control of the border” by Kiev, as well as “the withdrawal of foreign troops from the territory of Ukraine” will help stabilize the situation in the southeast.


In addition, giving an interview to Ukrainian TV channels, Poroshenko said that elections should be held in the Donbass under Ukrainian legislation. Poroshenko:

The election of October 18 (Election Day in the DPR - note “VO”) is the exact equivalent of the November 2 election last year, which destroyed the Minsk process. These are extremely dangerous steps, and we will do everything to prevent these elections. And if the Russian side conducts them, then we will qualify them as a violation of the Minsk process. 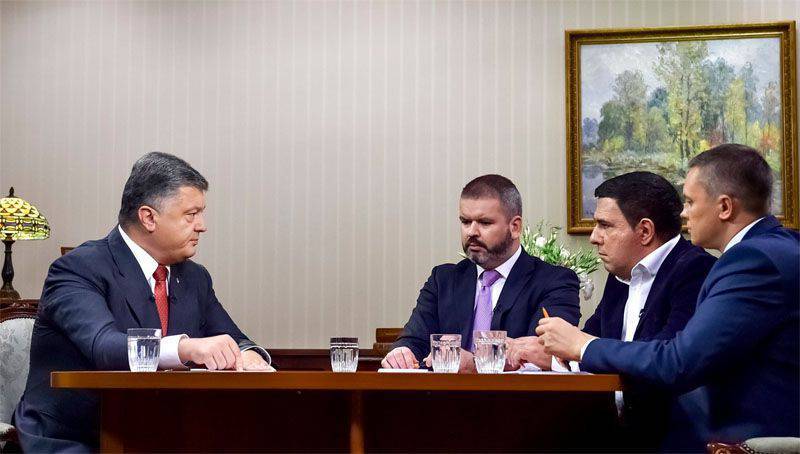 After all these statements to Poroshenko, several questions arise at once: firstly, why doesn’t he give a "go-ahead" for the withdrawal of American servicemen from the territory of Ukraine, who clearly feel themselves masters; secondly, if elections are held by Ukrainian standards, does this mean that Pravoseki and Svobodovtsi Tyagnibok’s anti-people front will be included in the electoral lists? And in general, does it mean that if Poroshenko appeals to the Russian side, mentioning the elections in the Donbass, Russia needs to appeal to the American side in case of any “elections” in Ukraine? ..

In an interview with the Ukrainian media, Poroshenko made a statement that can be considered sensational. According to him, the investigation of the Maidan case (executions in the center of Kiev in February last year) can be considered unsatisfactory. Statement Poroshenko leads RIA News:

I am not going to act as a lawyer for any law enforcement agencies that would have to ensure this impartial consideration of the cases of the killings on the Maidan and the responsibility of the old government.

And according to tradition, in an interview with pocket media Poroshenko announced that he would do his best to return Crimea to Ukraine.

Ctrl Enter
Noticed oshЫbku Highlight text and press. Ctrl + Enter
We are
Reports from the militia of New Russia for 27-28 September 2014 of the year
54 comments
Information
Dear reader, to leave comments on the publication, you must to register.