Tanks and roses. Donetsk lives in a fragile truce 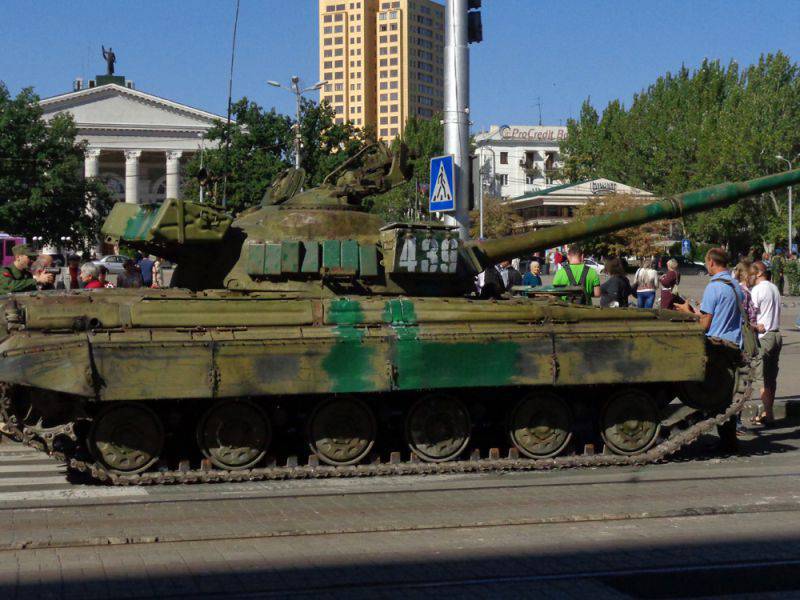 The truce established in the Donbas is too fragile. 19 September, as the deputy chief of staff of the DPR militia, Eduard Basurin, reported, a conflict erupted between Ukrainian soldiers and nationalist troops in the Avdiivka area, and in order to hide their guilt, the radicals then opened mortar and machine-gun fire on the village of Spartak. In addition, stressed Basurin, the Ukrainian side continues to concentrate military equipment and manpower along the line of contact.

Earlier, on September 17, hospital No.19, which is located in the Kuibyshevsky district of Donetsk, was shelled by ukrovoyakami. The head of administration of the area, Ivan Prikhodko, said that the fire was fired from the village of Peski, where the Ukrainian army stands. The windows of the hospital flew off, the façade was damaged, and official transport was damaged. Fortunately, there were no casualties.

The army of the Donetsk People's Republic, although it observes a truce, is constantly being strengthened, which is especially important against the background of the opposing forces.

September 18 new motorized rifle brigade of the Republican Guard received a battle flag. The ceremony took place on Lenin Square in Donetsk. It was attended by more 500 military DNR. The best fighters were awarded prizes.

Trophy armored vehicles passed through the main thoroughfare of the city, Artem Street. The Minister of Defense of the DPR, Vladimir Kononov, said: “It is very important that the equipment that we give you today with a banner comes to you in battles, this trophy technique is repaired at our factories by our craftsmen.”

Unfortunately, due to the fact that the announced time of the ceremony was postponed an hour earlier, as well as the movement of trolley buses was suspended, I was not able to photograph the celebration itself. However, the night before, on the evening of September 17, a ceremony rehearsal took place. I present some photos from it. 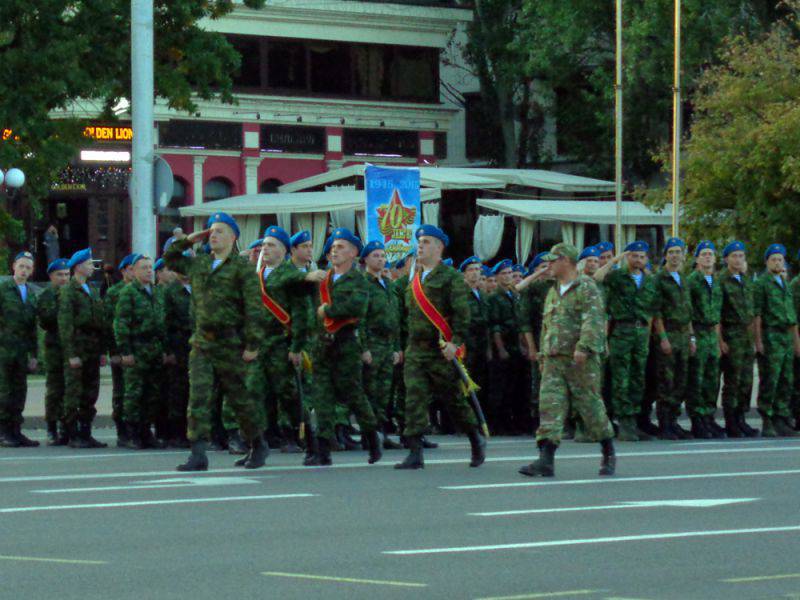 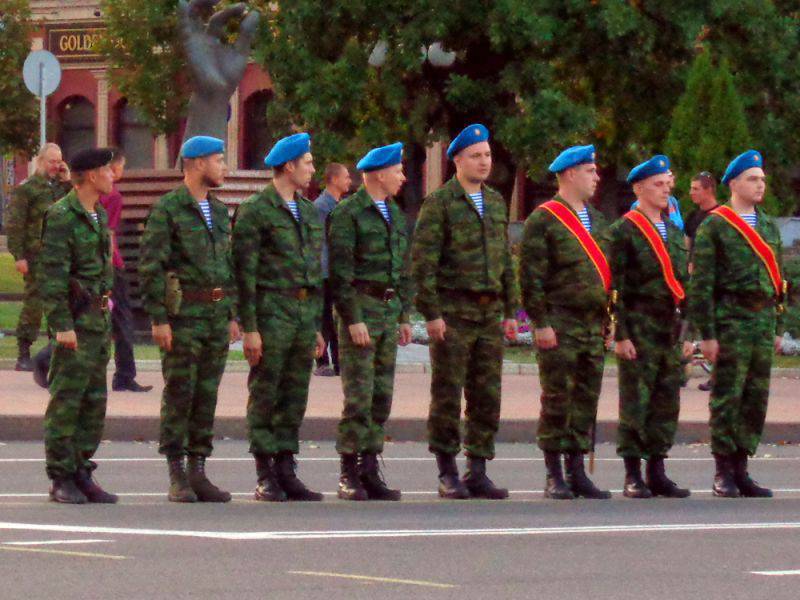 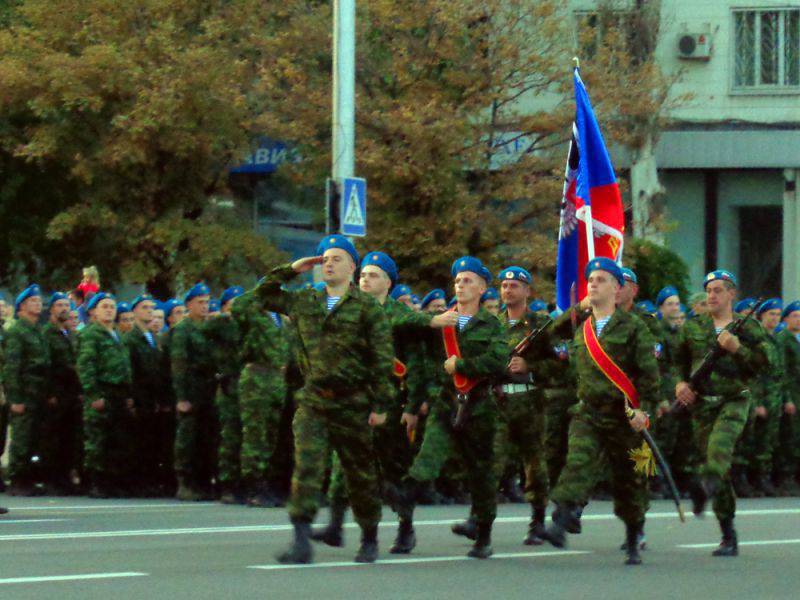 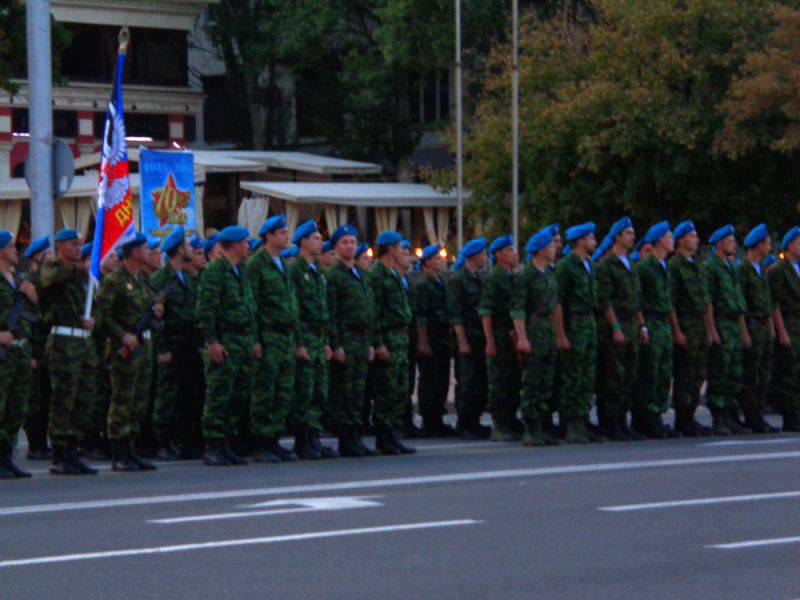 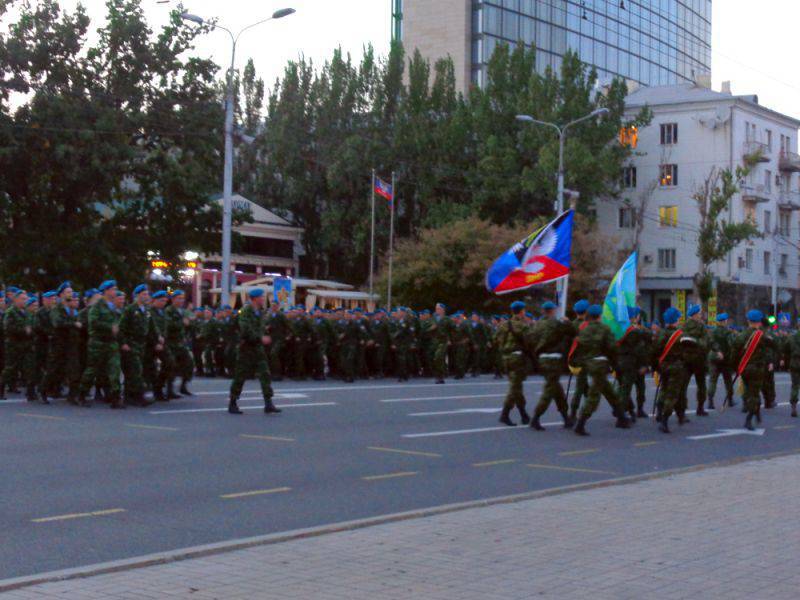 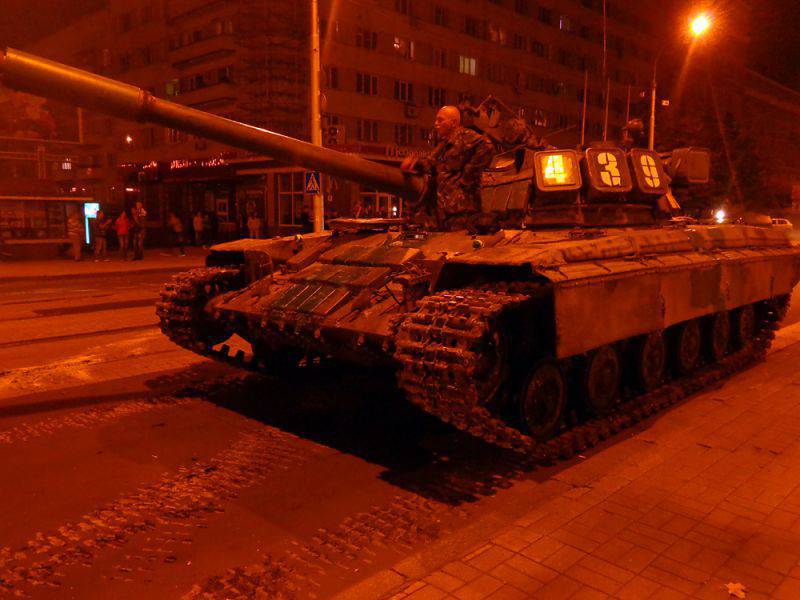 After the passage of military personnel and armored vehicles, an informal part of the event took place. Armored vehicles were temporarily given ... to Donetsk children. Yes, anyone could take a picture on tank or BMP. Basically, of course, this aroused the great interest of the boys. But adults did not stand aside. 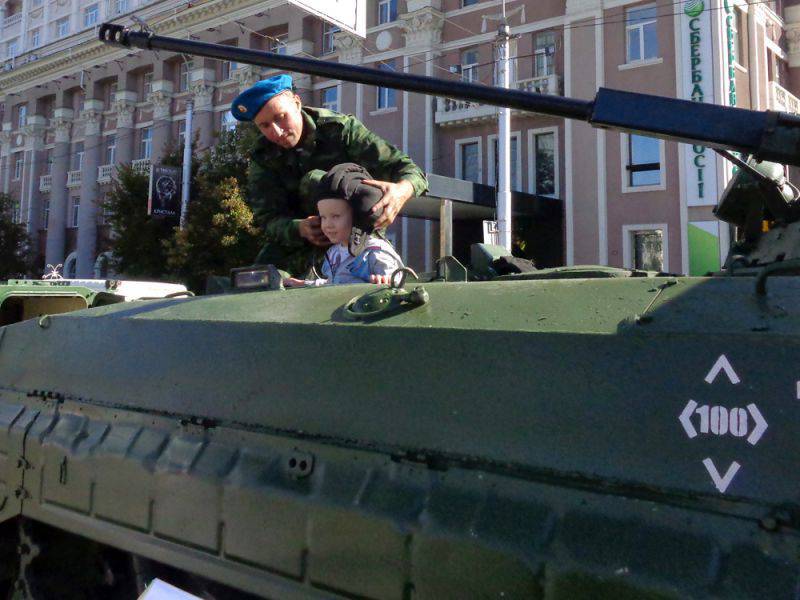 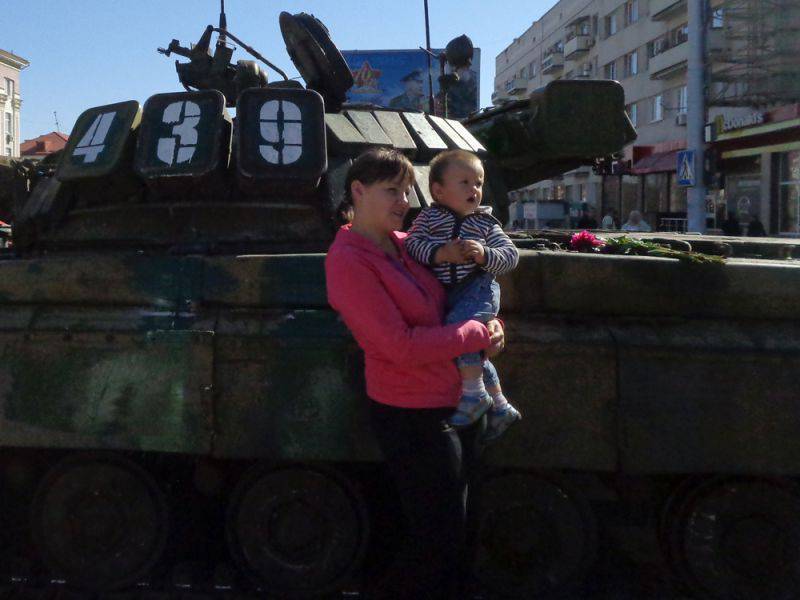 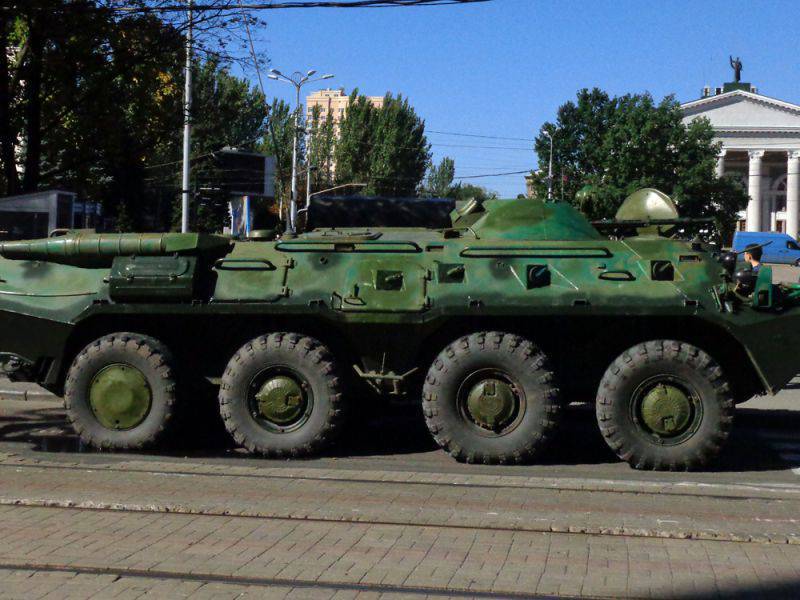 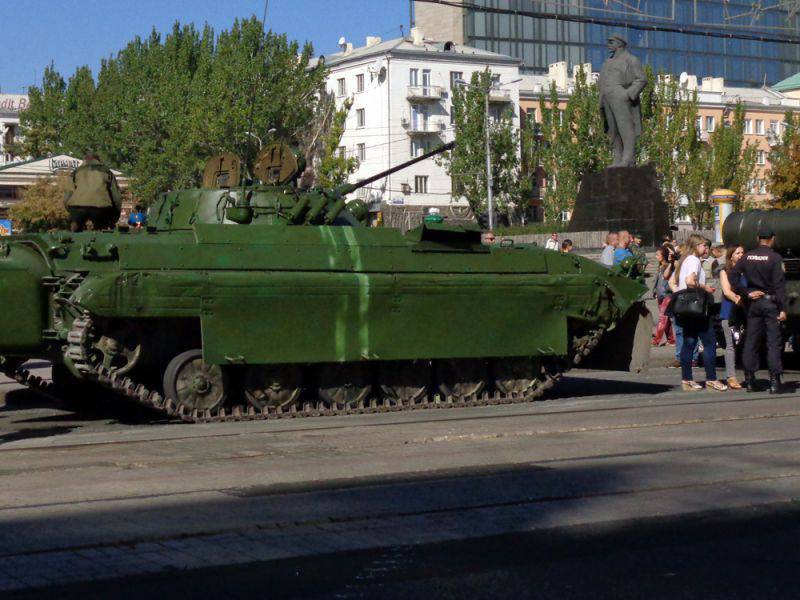 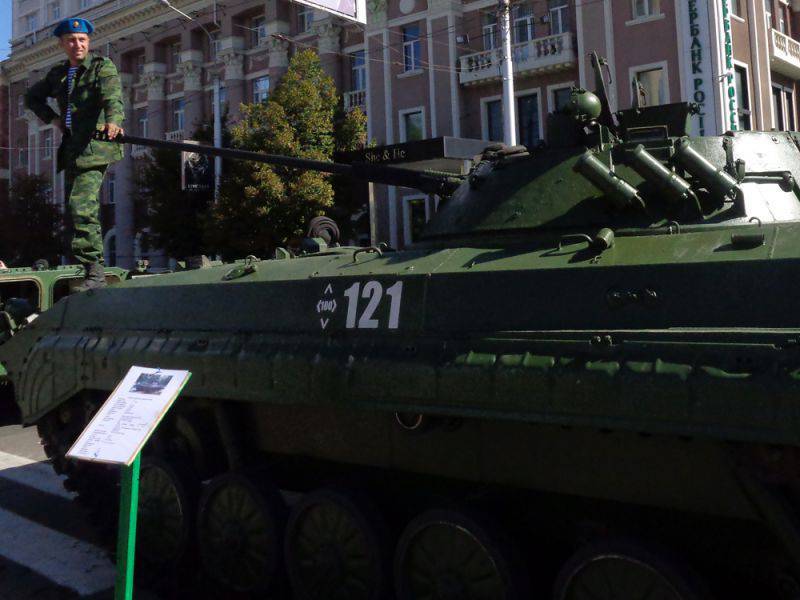 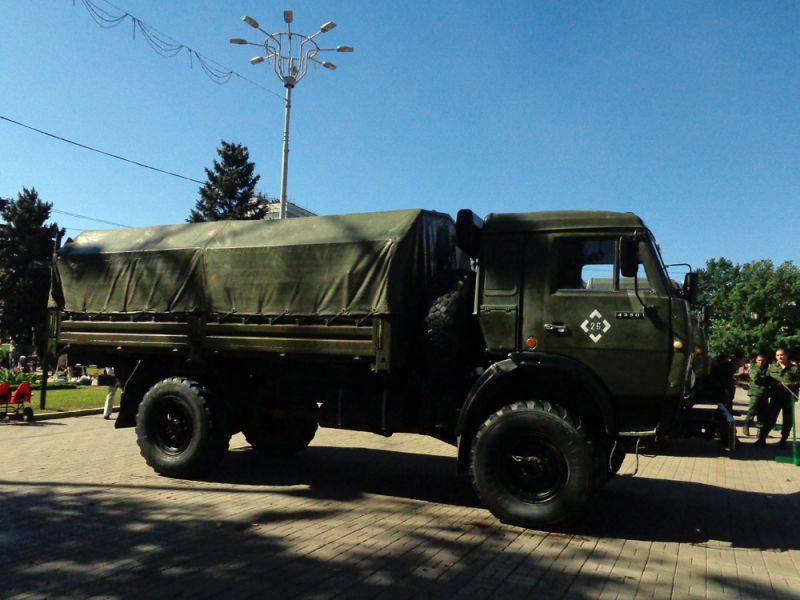 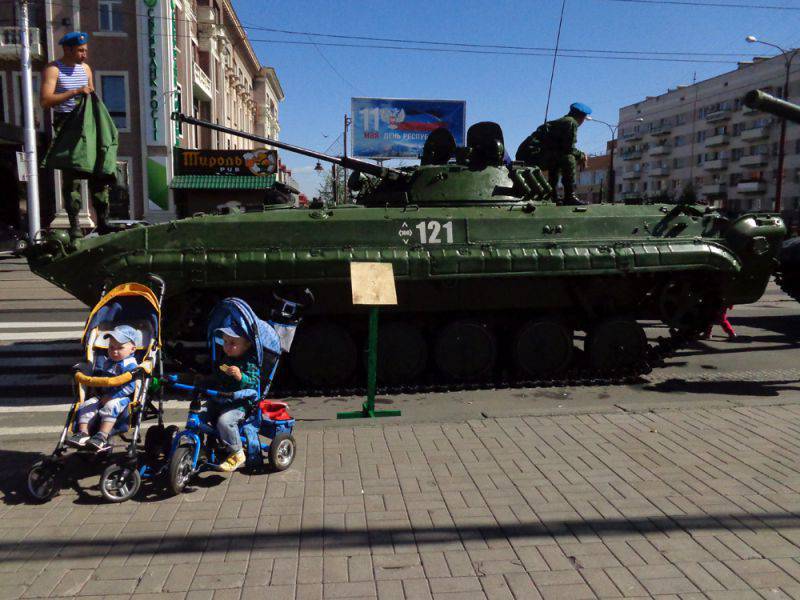 You could even look inside the formidable car and present yourself as a real soldier. 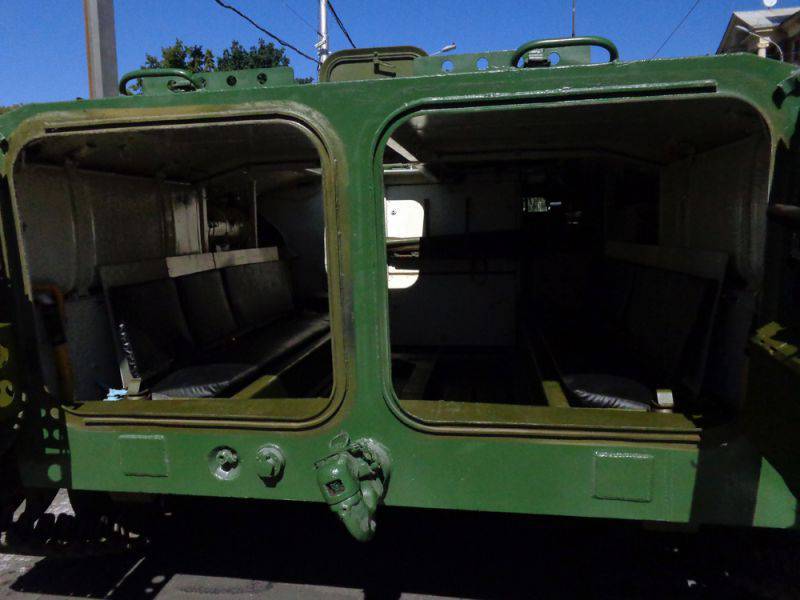 Someone in a special respect put fresh flowers on the armor. 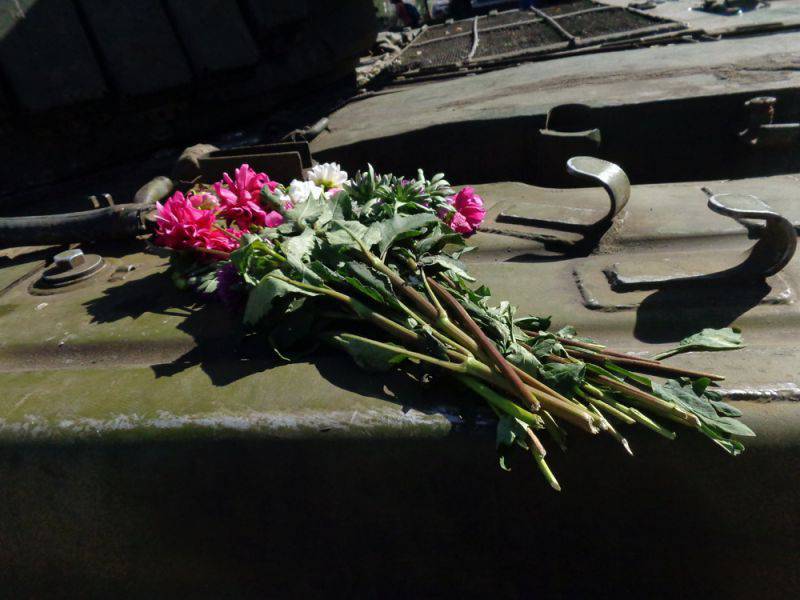 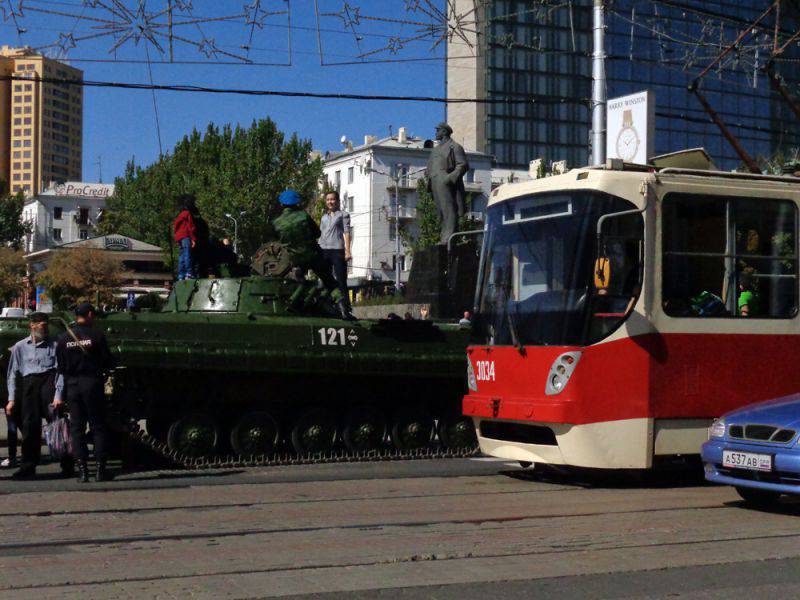 In addition, an exhibition was held on Lenin Square weapons and various means of protection. It also did not go without memorable photos of civilians, including very young. 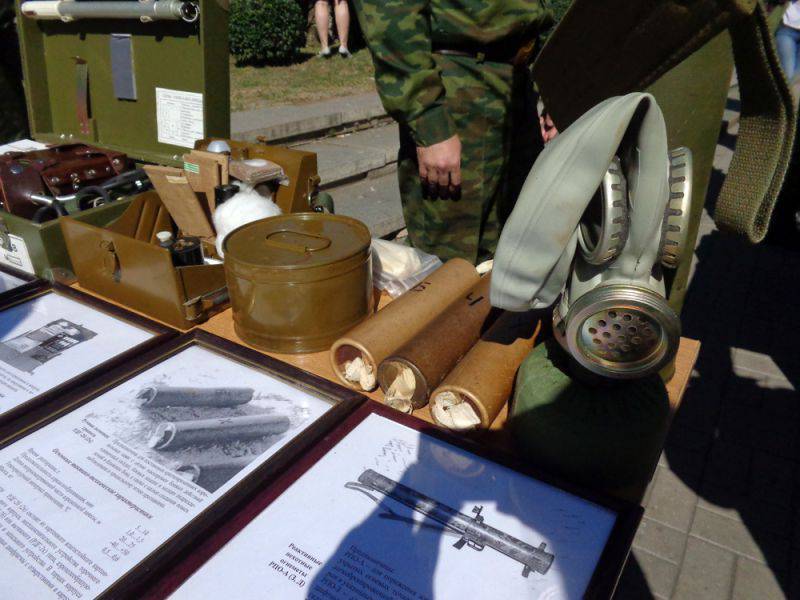 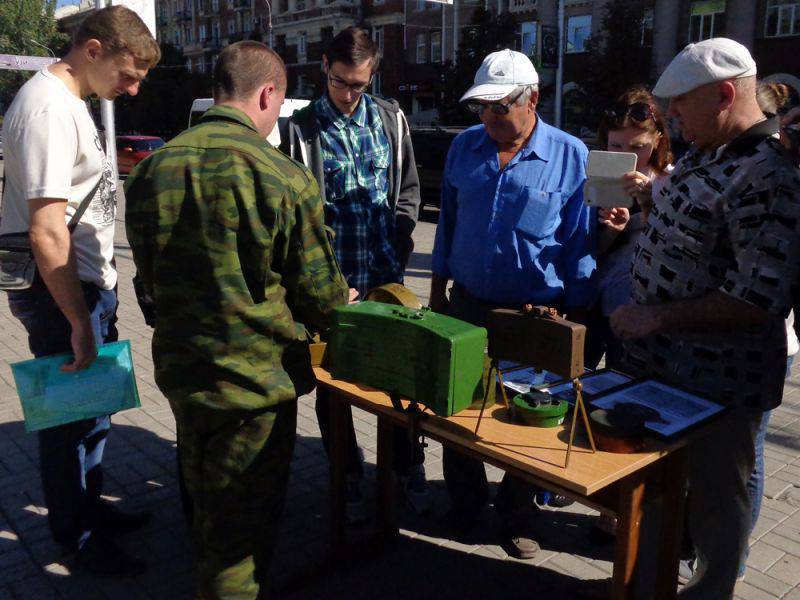 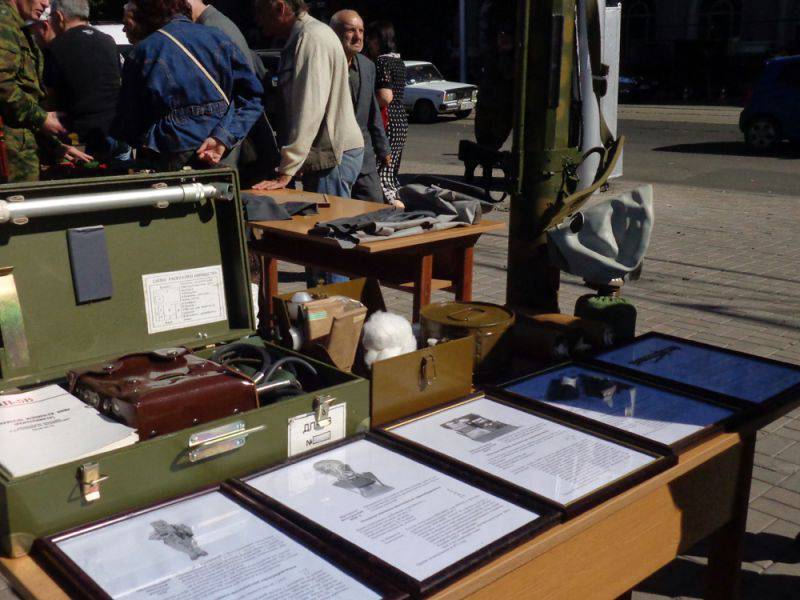 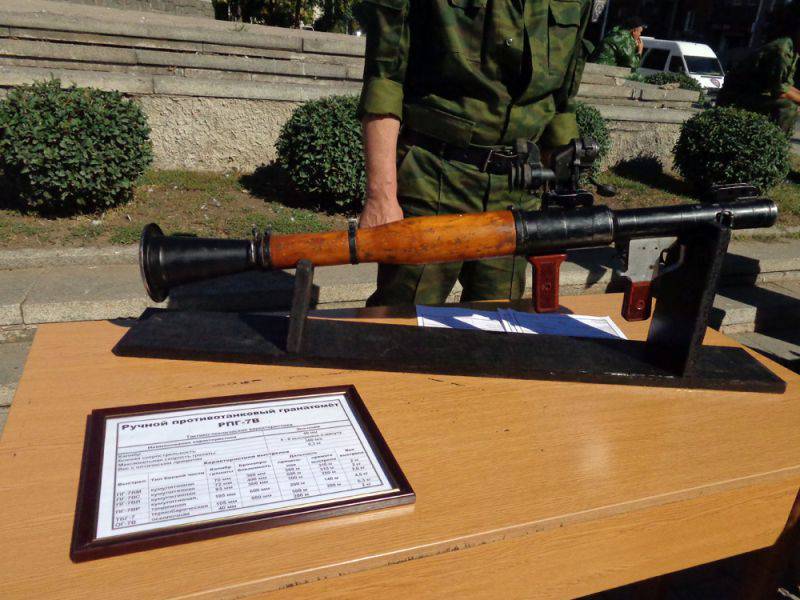 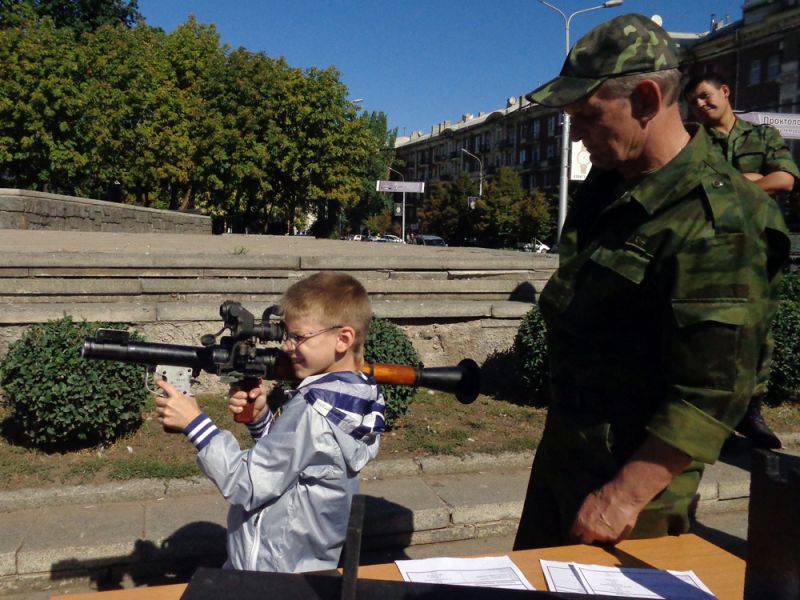 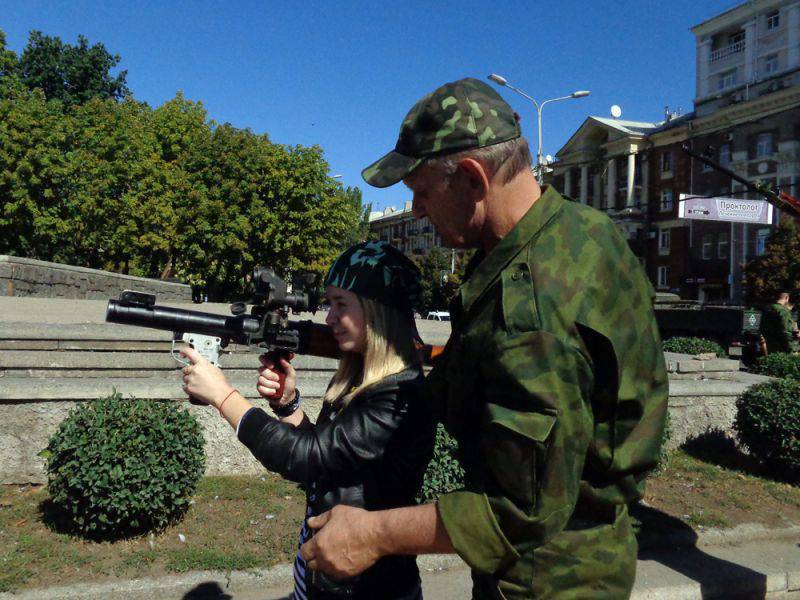 And it became a good tradition to attend field events at such events. 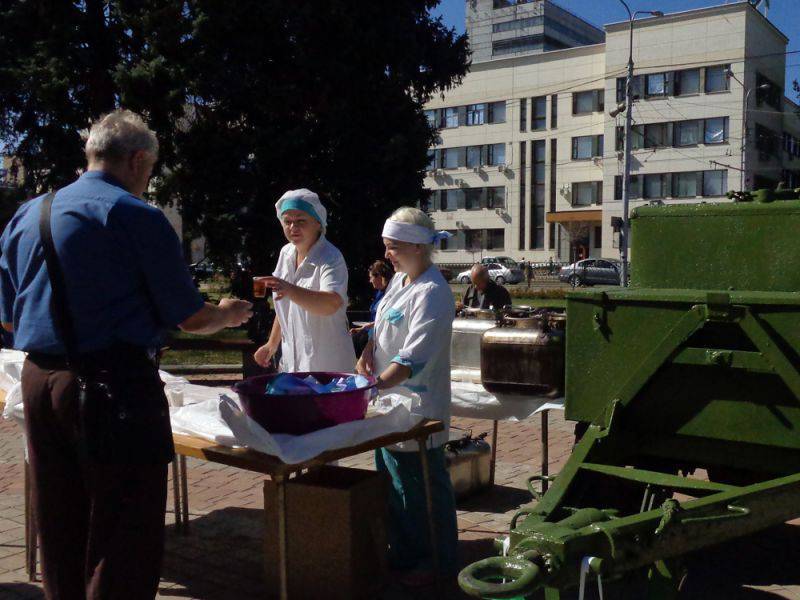 September 19 in Donetsk Park of forged figures opened the traditional festival of blacksmiths. A new forged figure called “Save and Save” was solemnly opened. It was made from what was left of the blacksmith shop, bombed by ukrovoyakami last year.

The new sculpture is a cross, in the center of which stands the icon of the Mother of God. Around the cross are branches on which doves of peace sit. The sculpture was consecrated by a priest. 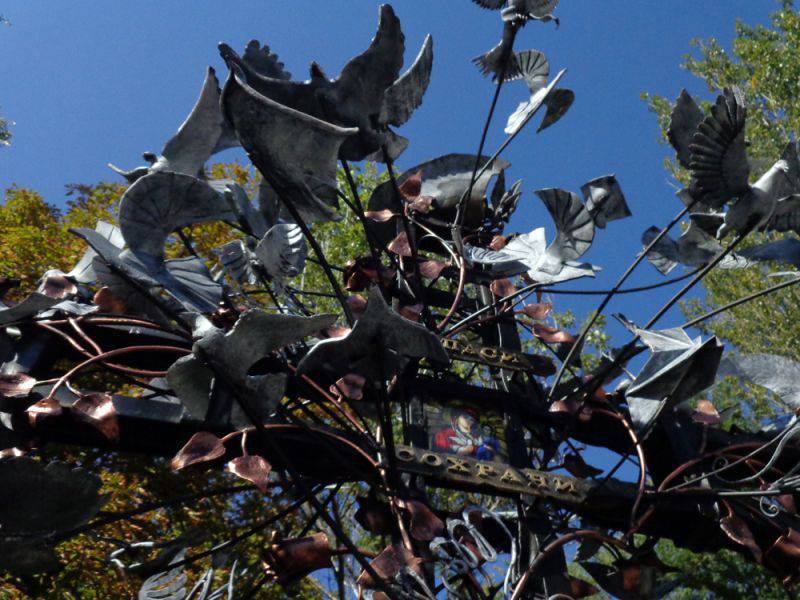 Blacksmiths made their products right before the eyes of those present. 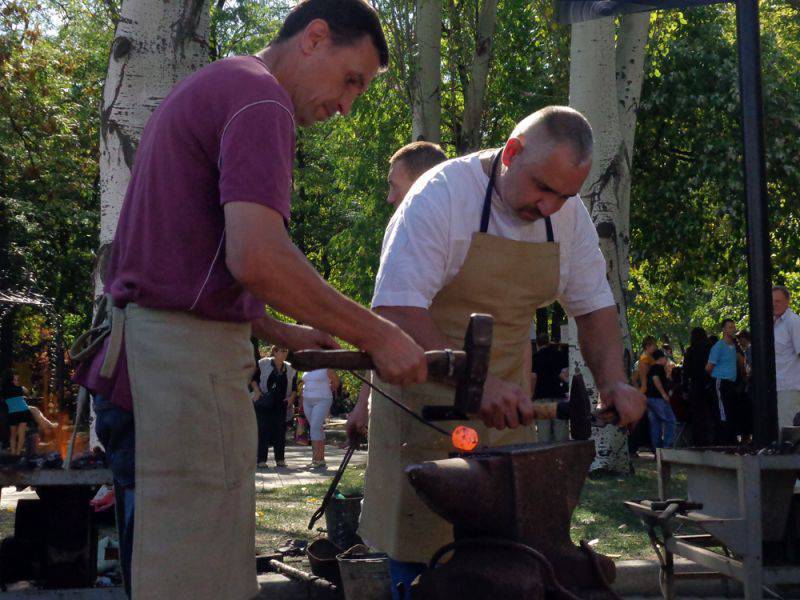 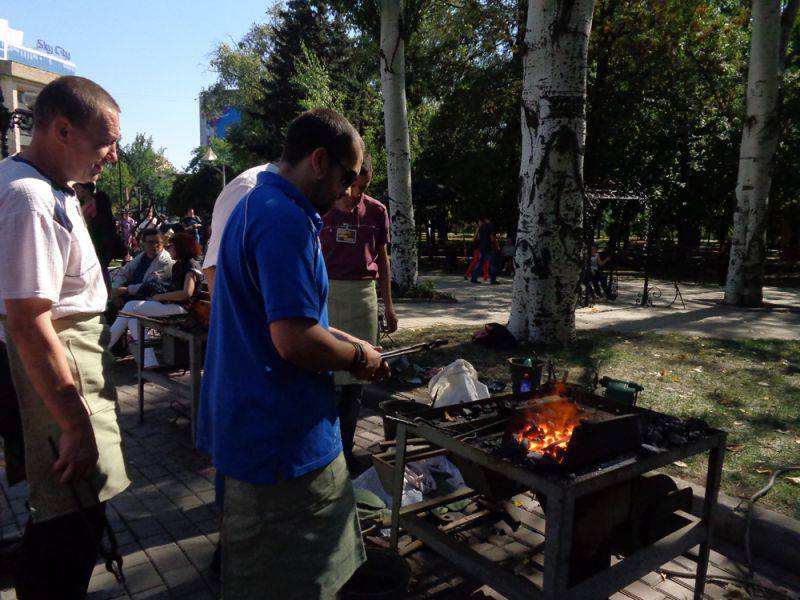 Immediately - forged souvenirs were sold. Severe Donetsk roses on patrons and simple, peaceful roses are symbols of the city. The pigeons of the world and here are small guns. Often, the material from which such beautiful products are forged is obtained in the battles for the independence of the Republic. 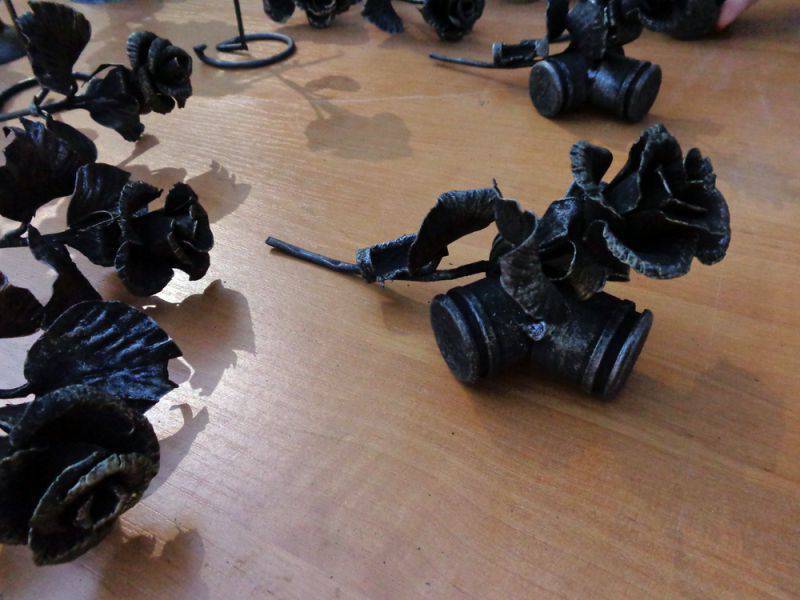 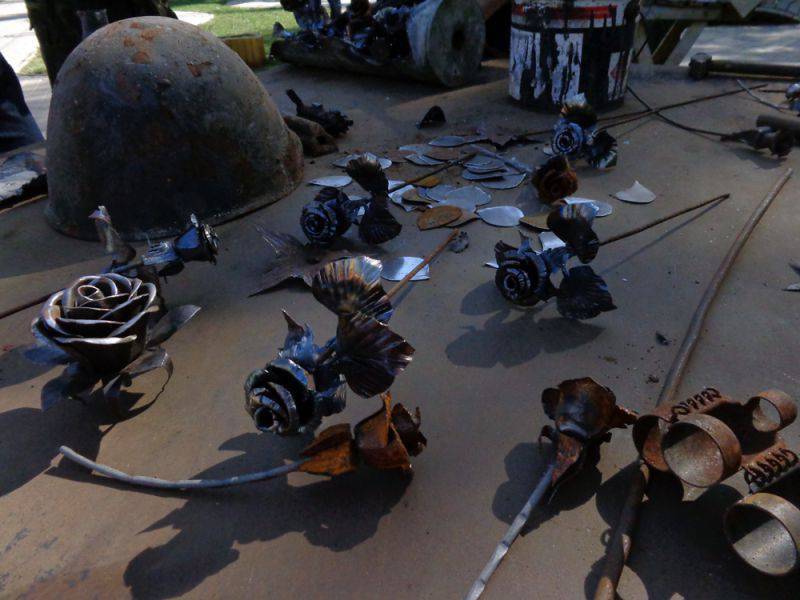