Zumwalt was built by pests. 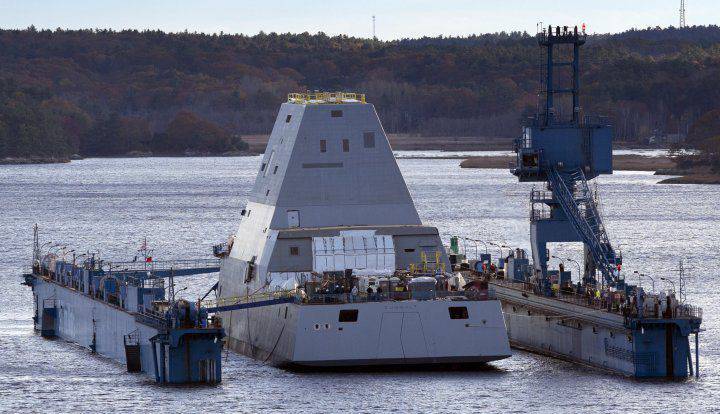 The previous article on the "unexplained" discrepancies in the ratio of the payload of modern ships and ships of the Second World War era caused a heated debate on the "VO" villages. Participants put forward various theories, eventually coming to the wrong conclusions.

I think it is necessary to develop this topic and thereby dot the "and".

Armored monsters of the past, whose gun turrets weighed more than half the modern destroyer. With thick armored decks and heavy-duty turbines, with which only the power plants of nuclear cruisers can now compare. Despite all this steampunk, bulky combat posts and crews of thousands of people, the displacement of cruisers remained within reasonable limits. Depending on the type, from 10 to 20 thousand tons.

Half a century has passed. The bulky towers of the main caliber disappeared. The designers have completely abandoned the reservation. Cut the crews several times. They limited the speed of the ships, thereby reducing the required power of their power plants. Increased efficiency by applying efficient diesel engines and gas turbines. Switched from radio tubes to tiny chips. Placed weapon in the underdeck space, further reducing the overturning moment it creates. Progress touched everything that one can dream of - on a modern ship each element (shield, crane, generator) weighs less than a device of a similar purpose on a cruiser of the time of WWII.

Changed the conditions of the battle. Everything has changed! But the displacement of ships remained the same.

It is clear that to “squeeze” a cruiser to the size of a missile boat is unwise. Still, the provision of seaworthiness, etc.

But in this case, we have 3000 tons of load reserve. And now they need something to fill and rational use.

“That's what they are used for!” Dear reader exclaims. Thousands of tons were spent on missiles, radars, computers, six-barreled anti-aircraft guns and other high-tech equipment ...

And it will be wrong.

According to the relative weight of weapons (payload), modern ships are twice as inferior to WW2 cruisers (in which payload also means armor protection).

There is no reservation now. And all the elements of weapons - both together and separately (missiles and launchers, radars, consoles in the combat information center, etc.) weigh less than weapons and MSAs of World War II cruisers.

How is this possible? Just a few vivid examples: 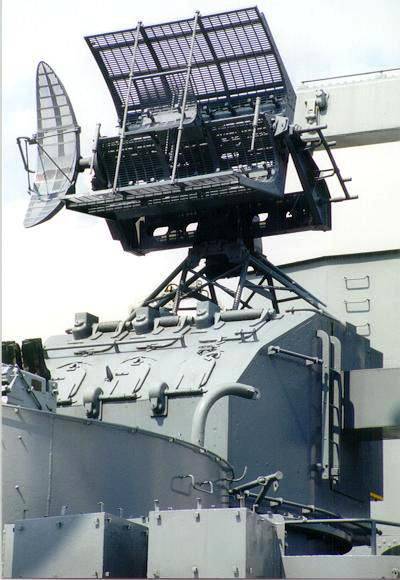 The main radar of the Aegis system is AN / SPY-1 modification “B”. The mass of each of the four phased antennas mounted on the walls of the superstructure is 3,6 t. Five equipment rooms, the weight of the equipment is indicated in 5 tons. Those. even with all four HEADLIGHTS and signal processor hardware, a modern radar barely weighs up to one rusty director. And on warships of a bygone era stood from two to four such directors. 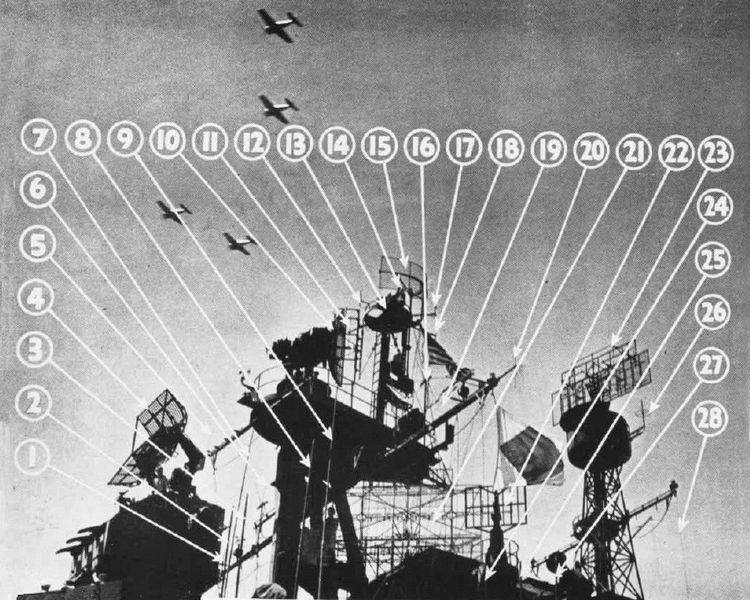 For visual comparison, the Legsington aircraft carrier (1944) complex of radio equipment. The director Mk.37 (#4) is noticeable on the left. At the very top is the SG-type surface survey radar (#13). Its weight is one and a half tons. Similar devices stood on any destroyer, cruiser or battleship. I will not describe each element, since everything is too obvious there.

To heighten the effect - analog computers in the combat information center of the cruiser "Belfast" (1939 year). Soviet chips rest. 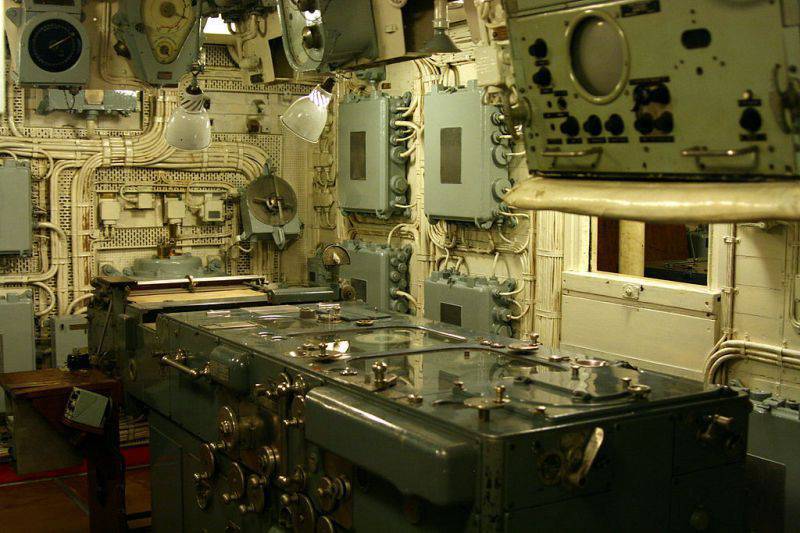 The same happens with the weapon история. Details have been set forth in the previous article. For example, the 64-charge firearms Mk.41 with full ammunition (“Tomahawks” and long-range anti-aircraft missiles) weighs 230 tons.

For comparison: one tower of the Soviet cruiser Ave. 26-bis (“Maxim Gorky”) weighed 247 tons. It should be borne in mind that 145 tons accounted for the rotating part, located above the deck. It is easy to imagine how this worsened the stability in comparison with the modern UVP, all elements of which are deep in the underdeck space! 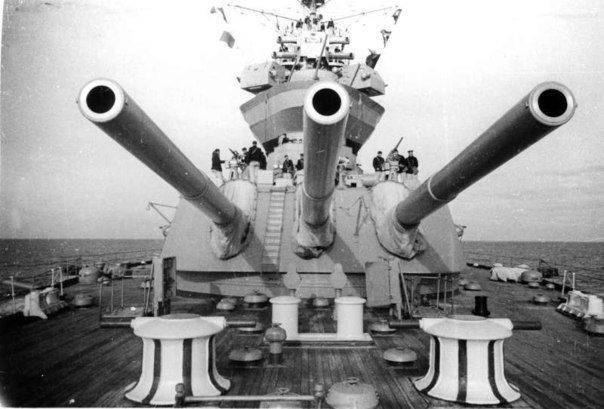 Critical readers, of course, will protest. In their opinion, the equipment on board the modern ship is accompanied by some kind of “mysterious” article of load associated with a large number of communications, cables and wires.

So, dear, even if you wind the cruiser up and down with fiber, like a cocoon, you do not compensate for the thousands of tons left after removing the 100-meter armor belts (solid array of steel, palm-thickness).

The paradox is - no answer.

The solution of the problem (carefully, kills the intrigue!)

The solution should be sought not in the articles of the load, but in the layout of the ship.

The thesis about the lightness of modern radar and equipment is brilliantly confirmed by the appearance of the missile cruisers. Thanks to the “lightness” of computer equipment, consoles, etc. “hi-tech”, designers can place equipment at any level of the superstructure without fear of breaking stability. 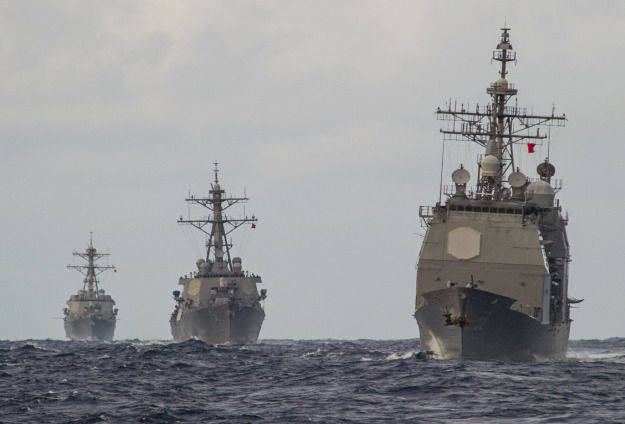 What do you see in the picture? That's right, a solid superstructure from side to side, as tall as a multi-storey building.

If you keep the same displacement and ballast values ​​as the old cruisers, but without heavy weapons and armor, you can build a “tower” of any height.

Why are they doing that?

Designers are trying to increase the height of the installation of antenna posts. Having no special recommendations and restrictions on this subject, they choose the most obvious way - they increase the height of the superstructure, simultaneously using the resulting volumes and facilities for the installation of new combat posts and fitness centers.

The negative effect of “windage” of bulky superstructures is compensated by additional ballast, the benefit of the designers in the reserve of thousands of tons of load reserve. 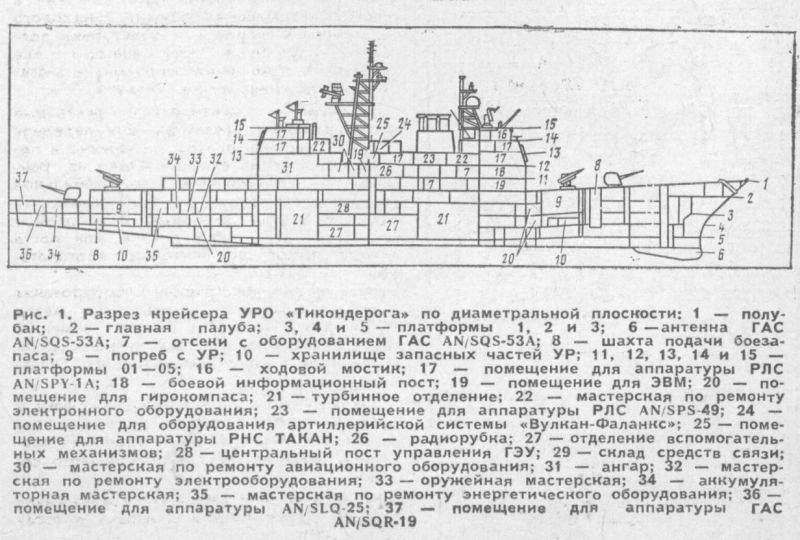 In “Tikonderogi” in general, everything is correct - the “mirrors” of HEADLIGHTS hang right on the walls. Simplified installation of equipment and its maintenance, at any time you can get access to the antenna itself, just rising to the right deck.

The atomic “Orlan” has grown uncontrollably upwards (59 meters from the bottom to the top of the foremast). And its superstructure turned into a Mayan step pyramid, with radio equipment installed at different levels. The second pyramid shot up closer to the stern, finally turning the cruiser into a ritual temple of death. 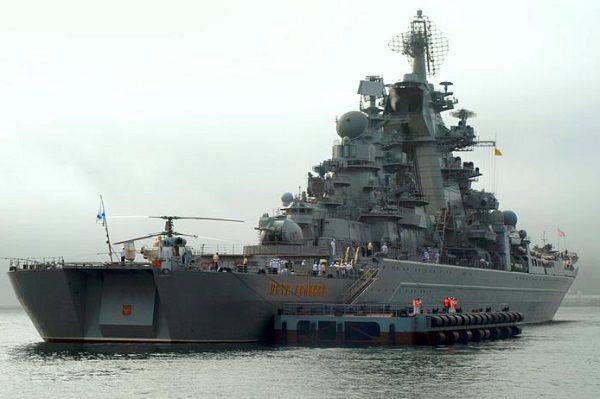 26 thousand tons - dance what you want

“Zamvolt” is the right path to success. The huge floating pyramid embodying all the superstructures, mast structures, antenna posts and gas pipe ducts. Now it is a single whole in order to prevent the desecration of the sacred image of the stealth destroyer. 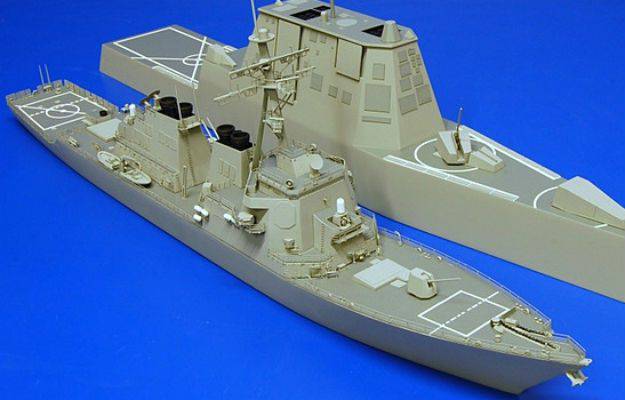 True, the number of launch shafts was reduced to 80, which, even with two six-inch guns, looks like a shame for an “uber ship” with a full displacement of 14 000 tons. But how beautiful and modern!

In general, despite all the advantages of high add-ons, this layout does not seem to be the most rational solution. Not only does the tall Himalayas increase the visibility of the ship, they simply “burn” the margin of stability that could be spent more usefully on installing additional systems (weapons, generators, constructive protection, etc.)

The only element for which the antenna installation height is critical is the low-altitude detection radar. Specialized radar, peering intensely at the horizon line, over which at any moment there may be a tiny dot. And then the score will go to seconds.

The higher the radar is installed, the more precious seconds the air defense system needs to intercept a low-flying rocket.

All other antennas height is useful, but not essential.

The long-range radar works on targets in the stratosphere and in space orbits, therefore any insinuations ± 10 meters for it do not matter. HEADLIGHTS can be quietly placed on the walls of a low superstructure, like the destroyer Orly Burk (and even lower - because the main radar of the Burke combines the radar detection functions of the NLC).

Satellite communication systems can work even at the very surface of the water.

Hence the question - if we need to raise only one radar to a height, then why should we foster the Himalayas, distorting the appearance of the destroyer?

The most obvious solution is a balloon. The usual balloon, which is used in the J-LENS - the new Pentagon system, to protect critical objects from low-flying missiles.

A shipborne radar balloon is much lighter and more compact than JLENS balloons.

Radar detection NLTs a priori, working at short distances, limited by the radio horizon. That is why they have low energy potential and small size. In fact, they are the same in size and purpose with the AN / APS-147 radar multipurpose helicopter MH-60R. Moreover, the creators of Romeo themselves have repeatedly stated that their system can be used for the early detection of low-flying missiles and the integration of helicopters into the Ajis destroyers air defense system. 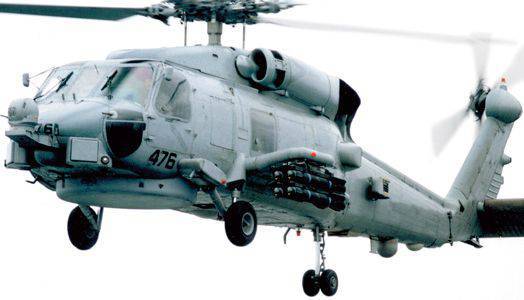 Such a radar should be raised above the water, to a height of at least 100 meters.

And it will be a breakthrough!

A) The range of the radio horizon will increase to 40 kilometers (instead of the current 15-20), which will bring marine air defense / missile defense systems to a whole new level.

B) The layout will change, there will be no need for ultrahigh bulky superstructures. With obvious consequences for other articles of the load.

Increase ammunition. Or put additional generators to provide power for the railguns and strategic missile defense radars deployed on the destroyer.

I do not agree - criticize, criticize - offer, offer - do, do - answer! ”
- Sergey Pavlovich Korolev.

Critics of the above theory will point out possible difficulties with the placement of equipment and combat posts, which, although they have a small mass, often require large volumes.

The components of the ground system C-400 are located on several mobile chassis. And it’s hard to believe that the same equipment and control cabin cannot fit on an 180-meter warship.

As is known, the figure with the largest area at a given perimeter is a circle (in three-dimensional space, the sphere has the largest volume).

Even if additional volumes are required, they can always be obtained without increasing the displacement of the ship. Just by increasing the width of the case by a couple of meters, reducing its length by the required value (10-20 m, conditional data). This will slightly affect the propulsive characteristics. The speed of the destroyer will decrease on the 1,5-2 node, but in the era of radar and precision weapons it does not matter.

In general, life is an unpredictable thing. Where each task can have several alternative solutions. 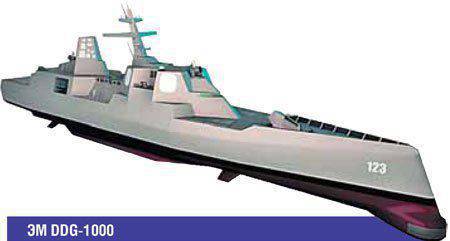 Ctrl Enter
Noticed oshЫbku Highlight text and press. Ctrl + Enter
We are
Destroyers of the type Zumwalt. On the current state of the ships of the future"Svetlana". History of creation
Military Reviewin Yandex News
Military Reviewin Google News
190 comments
Information
Dear reader, to leave comments on the publication, you must to register.