21 September 2015
45
Choking in an uncontrolled flow of refugees, Europe has not found anything better than to accuse Russia of provoking a Syrian migration to the continent. The other day for example news Deutsche Welle came out with a catchy title "Position of Russia: Damascus - weapon“Are the EU refugees?” The German channel made claims to Moscow that it distanced itself from the refugee problem, considering it an internal affair of the European Union, and itself provoking the Syrian conflict with arms supplies. 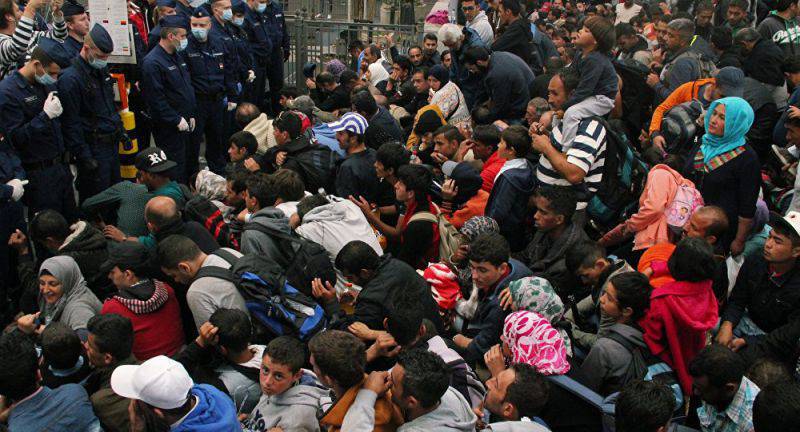 Refugees cannot be written off to Syria

This promise (of Russian responsibility for uncontrolled migration to the continent) in the week passed a red line in the leading European media, and Deutsche Welle is no exception. There is nothing surprising. Pictures of the poor fellows, in despair storming the border crossings of European countries, filled the television screens. The events in Ukraine and even in Syria have faded into the background. Europe is alarmed by the unrest in its own home and is asking the legitimate question - who will be responsible for this uncontrollable flow of refugees, threatening the well-being and tranquility of local inhabitants?

It is clear that European politicians do not want to take responsibility for what happened. It comes to loud public squabbles, blocking border crossings, stopping rail links and even direct clashes, as happened on the Hungarian border, where local security forces disarmed the Croatian police officers accompanying the train with refugees.

All these are the events of the last days. They were preceded by attempts to understand the refugee situation, to find the root cause and eliminate it in order to solve this difficult problem. First of all, it was necessary to decide on a simple question - how many refugees and where are they from? Initially, ships with migrants went from North Africa to the shores of Italy. Later routes reoriented to the Greek islands. Towards autumn, refugee flows flooded the countries of South-Eastern Europe. It was then that the theme of Syrian refugees sounded.

The numbers were called the most different - six hundred thousand, eight hundred, one million ... By mid-September, the International Organization for Migration (IOM) announced the first results - since the beginning of the year more than 430 thousands of migrants arrived in Europe. According to published data that TASS cites with reference to IOM, “as of 10 September, 432 thousand 761 migrant arrived in Europe across the Mediterranean. Their main part (309 thousand 356) came ashore in Greece. This is followed by Italy (121 thousand 139), Spain (2166) and Malta (100). In Greece, among the arrivals are the most Syrians (more than 175 thousand) and Afghans (more than 50 thousand). In Italy, they are Eritreans (more than 30 thousand) and Nigerians (more than 15 thousand). ”

Actually, it was from these figures that the topic of Syrian refugees arose, which unscrupulous politicians are trying to connect with the supply of arms to Russia by government forces in Syria. Our diplomats are weakly justified, they say, people are fleeing from the terror of Islamists LIH, and not because of the actions of the troops of Bashar al-Assad. This is the assessment of the phenomenon in high offices. And what on earth?

Here it is better to refer to the testimony of not engaged media and independent experts. They have long paid attention to a number of remarkable facts. The main one is that able-bodied men prevail among migrants (according to various estimates - up to 80%). They have money, mobile phones and modern devices, but there are no documents. In the Serbian Belgrade there was an amusing incident. In a tent camp at the station square, migrants staged a protest action - they demanded Wi-Fi for free access to the Internet.

The second fact established by the press follows from this event - quite often economic migrants from India and Pakistan claim to be Syrian refugees, but Kosovo Albanians most often sin. According to experts, they make up about a third of the refugees. Recently, the Serbian newspaper “Blitz” published material and photographs of the passports of the self-proclaimed Republic of Kosovo, abandoned on the railway tracks at the border crossing Horgos on the Serbian-Hungarian border. The information that Kosovo Albanians are trying to impersonate refugees from the Middle East was confirmed to the newspaper by the Minister of Labor, Employment, Veterans Affairs and Social Affairs of Serbia, Aleksandar Vulin.

As REGNUM notes, the outflow of the Kosovo population to Hungary, Austria, and Germany has become widespread even before the beginning of the refugee crisis in the EU. According to Kosovo media reports, the region, in search of a better life, is left by thousands of Albanians every month to 30. At the beginning of 2015, it was predicted that with these rates maintained, by the end of the year, one sixth of the population would leave Kosovo. According to Mother Teresa, a humanitarian organization, 18% of Kosovars live on € 1 per day, 28% - have € 1,4 per day on food, clothing and utilities. The unemployment rate in Kosovo is about 60%. The Serbian "Blitz" refers to the official statistics - only from the end of last year to the spring of this, 100 thousand Kosovo Albanians moved to the EU countries.

It is not easy to do. After all, Kosovo is not part of the European Union, which means it does not have the right to free movement of labor resources. So do people without documents, under the guise of refugees from war-torn Syria. In the fall, the flow of people increased. As follows from IOM materials, since September 1 the number of migrants has grown by more than 80 thousand people.

The fact that economic migrants prevail among refugees has been understood in Europe for a long time and began to prepare protective measures. In Germany, even in the summer, they began to equip centers for receiving refugees from the Balkan Peninsula - that is, from those countries that the German authorities do not consider as dangerous for the citizens living there. The list includes Macedonia, Serbia, Albania, Montenegro, Kosovo ... The meaning of reception centers is to expedite the program (for two or three months) to deal with applicants for refugee status and, if there are no grounds for receiving benefits, to return immigrants to the country of residence .

The first such center was opened in the Bavarian town of Manching near Ingolstadt. He settled in the barracks named after Max Immelman - one of the best military pilots of the First World War. Speaking at the opening of the center, the Minister of Social Affairs of the Federal Land of Bavaria, Emilia Muller, emphasized that this institution is intended for those "who have no prospects to stay in Germany." Only in Bavaria are preparing two more similar centers with a total capacity for 1500 refugees. They are settling in other lands.

How did it happen that Germany, for sixty years actively attracting foreign labor to stimulate its economy, suddenly opposed the admission of able-bodied migrants? The fact of the matter is that Germany is not going to close its labor market. Recently, for example, the German Minister of Labor and Social Affairs Andrea Nales took the initiative to provide the right to work and study 20 in Germany to thousands of people from the Balkan countries every year. German bankers, industrialists, economists also speak about this in public speeches. However, protective measures are taken. Moreover, even Chancellor Angela Merkel began to speak bluntly, “those who come to us for economic reasons will not be able to stay, no matter how hard their personal life is.”

There are several reasons. The first is that the flow of migrants significantly exceeds the estimated possibilities of their arrangement. According to the newspaper Frankfurter Allgemeine Zeitung, Germany’s total expenditure on refugees in 2015 will be about 10 billion euros. The estimated amount is four times more than a year earlier, when the expenditures on refugees amounted to 2,4 billion euros. Secondly, the passport-free public goes to the Germans not to hide from the war in a quiet Europe, but behind social benefits. Work interests them a little. Therefore, they storm the borders of the most prosperous country of the continent.

But most importantly, the Germans seemed to understand that the flow of migrants had a man-made beginning. There are more and more confirmations. As early as spring, evidence emerged that the Mediterranean flow of migrants is a well-established business. TAZ newspaper observer Klaus Hillenbrand described in detail how the delivery of migrants to Europe works. True, this scheme had its own peculiarity. There, no one guaranteed the delivery of migrants to the continent. The main goal of enterprising businessmen was to get money from immigrants. Often they were just left to die at sea or on the side of European roads.

By the summer, the situation had changed. There was an interest in the delivery of refugees to Europe. Structures of Soros took up the matter. In the media, there was evidence that the leading advertising websites in Europe associated with this financial speculator as the best place for refugees The Ayn Rand Institute and Riseup had a hand in organizing a massive flow of migrants. The American trace was also found in the International Integration Organization, which is led by William Lacey Pig, who is closely associated with the CIA. He is called a key figure in financing the transportation of refugees.

As REGNUM writes, “It is American organizations that actively invite everyone to Europe, promising them various benefits. They pay the road for the refugees and take a debt receipt for which they will have to pay ... What is this? ”There is no answer to this question. Experts believe organized migration is a way to make Europe more compliant and obedient in a number of important positions for Americans, in particular, under an agreement on a free trade zone between the EU and the US, which has not yet received adequate response from European politicians.

Like it or not, EU countries have already quarreled because of the resettlement of refugees. Began to close the borders, to build barriers. In early September, French President Francois Hollande and German Chancellor Angela Merkel developed measures to combat the influx of migrants to Europe. They proposed to redistribute refugees between EU members on the basis of agreed quotas. In turn, illegal migrants who are not refugees and who have not received such status should be expelled from the EU. However, there was a misfire with quotas. Many EU countries have simply abandoned them. Several meetings of the Council of Ministers of Foreign Affairs of the EU, the Ministers of Justice and the Interior did not bring any result.

September 23 will bring together European leaders to address the refugee problem. This summit is called extraordinary. Russia's permanent representative to the European Union, Vladimir Chizhov, in an interview with TASS, said that European politicians are now searching for new solutions to the refugee problem, “various ideas began to appear, such as paying compensation. Do not take migrants - pay. And the figure is called quite innocuous - 7,5 euros for each unaccepted refugee. But a day! ”

... No one undertakes to say whether these proposals will become the basis for concrete decisions. Probably, therefore, anticipating the failure of the next summit, the Europeans launched a propaganda campaign against Russia, accusing it of provoking a stream of refugees to the continent. Tolerant Europe quietly keeps quiet about the fact that during the years of the Syrian conflict, Russian planes made dozens of flights with humanitarian aid to Damascus. The back also did not go empty, but was carried by those who really suffered from the war.

Ctrl Enter
Noticed oshЫbku Highlight text and press. Ctrl + Enter
We are
Migrants go north. The specifics of the migration situation in ScandinaviaRefugees from Syria. Will Russia accept immigrants from the Middle East?
45 comments
Information
Dear reader, to leave comments on the publication, you must to register.