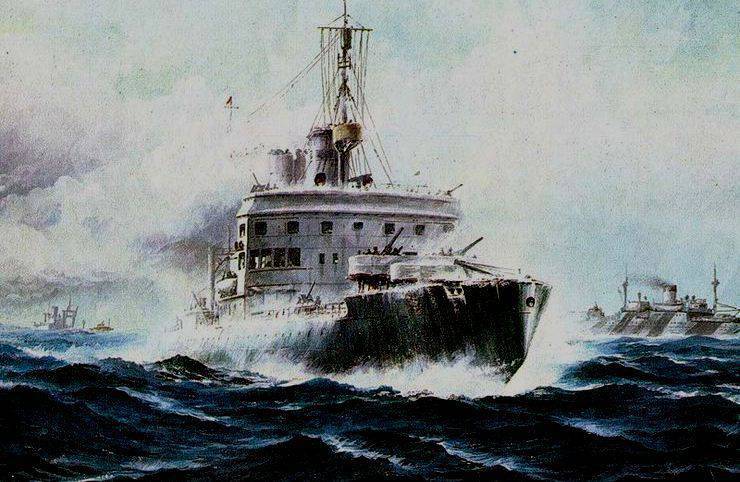 In 1932, the already rather outdated icebreaking steamer "A. Sibiryakov" managed to pass the route of the future Northern Sea Route (NSR) during one navigation. The following year, a similar feat was to be repeated to “Chelyuskin”, but it was erased, and then the Arctic ice floes were crushed. One of the reasons for this incident was the lack of icebreaking vessels that would assist the ship in overcoming the NSR. Therefore, in the early summer of 1934, the USSR government decided to equip the Arctic fleet with new powerful icebreakers. Technical project №51 for new ships was developed by the team of Sudoproekt under the leadership of K.K. Bokhanevich, and the working draft was made in the design bureau of the shipyard named after S. Ordzhonikidze, the drawings of the future power plant were purchased from the British company Armstrong.

The project was based on the well-proven in the Arctic cruises "Krasin", which was the development of the first icebreaker of the so-called Russian type - the famous "Ermak".

In October 1935, the lead icebreaker "I. Stalin" and the same type "V. Molotov" were laid at the Baltic Shipyard, and in November, at the Marti Black Sea Plant, the same type "L. Kaganovich" and "O. Schmidt". Put into operation on the eve of World War II, all of these icebreaking vessels actively participated in it. The "I. Stalin", "L. Kaganovich" and "O. Schmidt" transferred to the Arctic until the very end of the war provided combat work for the North fleet. Many articles and books have been written about them. Remained in Leningrad "V. Molotov ”was undeservedly forgotten. It is about him that we will discuss later.

Despite the fact that “V. Molotov ”was laid second in the series, his commissioning was delayed. But in the construction were taken into account all the shortcomings identified during the operation of the same type of vessels. On this icebreaker significantly improved the ventilation of all interior spaces, especially the engine room. Reassembled the installation of auxiliary mechanisms, improved individual systems and devices. All these works slowed down the construction, and therefore bring the icebreaker “V. Molotov "on sea trials planned only in August 1941 year. 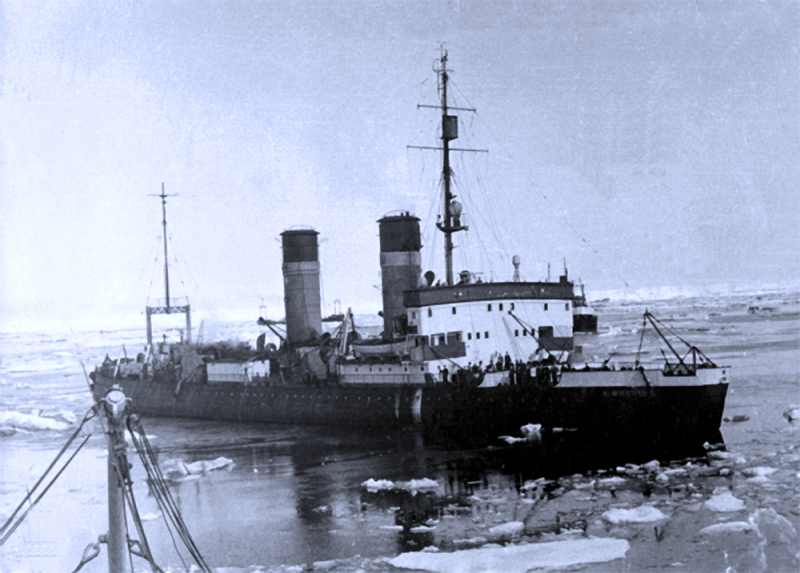 By 22 June 1941, the technical readiness of the icebreaker was 79%. The outbreak of war forced him to enter into service under an abbreviated program. On August 8, the icebreaker became part of the Red Banner Baltic Fleet, and as an auxiliary cruiser. Simultaneously with the finishing works "V. Molotov "armed. Guns and machine guns were installed on the decks.

In October 1941, the seamen were mobilized, with the exception of commanding personnel and persons who could not be drafted into the army due to age and state of health. And shortly before that, September 20, its commander Ya.P. Legzdin received orders to go to sea. MI was appointed senior mechanic. Denisov, a long time sailing on icebreakers in the northern seas. Under normal conditions, a ship that did not pass the sea trials, hardly anyone would decide to release on the voyage. But the war made its own adjustments. Part of the mechanisms was tested during the completion. The work of the main machines checked during mooring trials. The general results of these tests showed the ship’s readiness to sail.

Hastily completed the loading of coal, equipment and food. At exactly the appointed time, the icebreaker “V. Molotov, slowly, as if reluctantly, moved away from his parking lot.

The usual, in general, unremarkable trip turned for the crew into an event of great importance. After all, all the work done before this, coordination, the ability to control the ship and its mechanisms, all crew members, were checked at sea.

The transition to Kronstadt in peacetime among the sailors was not even considered a way out to sea. Now, when the enemy was on the shores of the bay, when the navigation fence, which provided safe navigation, was removed and the lighthouses were extinguished, the march really became a kind of examination of the maturity of the crew and the ship’s readiness to carry out the tasks assigned to it.

The transition was difficult. Despite the arrangement, the leading lights did not light up at the appointed hour. The commander led the powerful ship almost to the touch, guided by practical experience.

On September 22, when the icebreaker was approaching Kronstadt, a headboat appeared at the side. Received an order to immediately return to Leningrad. The first trip showed that the crew and the icebreaker coped with the task. Now it was possible to report with confidence about the full readiness of “V. Molotov "to join the current fleet.

Winter came. The ice first bound the Neva and then the Gulf of Finland. It became increasingly difficult for the ships of the Baltic Fleet to enter combat missions. Soon, without the help of icebreakers, they could no longer leave their bases. "AT. Molotov joined combat duty with 24-hour readiness.

By December 1941, the Red Army had exhausted the enemy in the most difficult battles for the capital. And from December 5 began the offensive of our troops near Moscow. But, having suffered a defeat in one place, the Germans tried to achieve success near Leningrad. These days the icebreaker “V. Molotov "in his first combat campaign. 4 December 1941, having the vessel “Aquarius” in tow and having taken on board the 196 passengers, the icebreaker headed for Kronstadt. Gloomy weather hampered the advancement of the ship, but at the same time hid it from the enemy. Fortunately, the wind did not exceed 4-x points, did not cause the movement of ice and did not really interfere with towing. December 5 came to Kronstadt. With this flight, the combat service of the icebreaker began to escort individual ships and caravans to Kronstadt and Leningrad.

December 6 "V. Molotov spent two caravans of ships: one - to the edge of the ice to the west of Kronstadt, and with the second he returned to Kronstadt. Two days later, the new wiring of the caravan to the island of Lavensaari with Kingisepp in tow. Severe frosts with a seven-point wind pierced the sailors who served on the upper deck, at artillery installations and at observation posts.

December 11 with another caravan of ships "V. Molotov left Kronstadt. Visibility did not exceed one cable. For the secrecy of the transition the best weather was difficult to desire. To lock up our ships in the roads of Kronstadt and prevent them from active hostilities, the Germans scattered a huge number of mines throughout the Gulf of Finland. At night, in a blizzard, in the complete absence of visibility and severe frost, mine observation was impossible. I had to rely more on the experience of the captain and just for good luck.

The icebreaker, with its mighty hull, cracked ice fields, leaving behind a wide, ice-free canal. Suddenly, a deafening explosion rang out among the crashing ice. The lights went out on the ship. However, among the team - no panic and confusion. Literally in a few seconds, the lighting in all the interior of the icebreaker is turned on, communications are established, the ship continues to move.

An emergency team inspects the hull. The explosion occurred in the area of ​​124-125-th frames. In some places in the nose cracks in the bulkheads were found. But there was no leak. There were no casualties in manpower. The mighty body of the icebreaker passed the test of strength.

Three hours later, “V. Molotov, with a convoy of ships, was already in Leningrad. After a short rest, a thorough examination of the injuries started. It turned out a lot. Detected faults and damages were eliminated within 24 hours by the ship's personnel. December 13 N.M. Nikolaev, replacing the contused by the explosion of Ya.P. Legzdin, reported to the command about the readiness of the ship for the march, and the very next day “V. Molotov ”went to the wiring in Kronstadt. Over the next three days, he safely conducted three caravans of ships to Leningrad.

The next trip was not much different from previous ones. Frost reached 21º. The gusty wind drove the snow. Under the heavy hull of the ship, ice fields broke and broke. In the distance, on the coast, cannon fire was heard. Relative calm, however, gave the crew no reason to relax. Extreme attention and readiness to repel enemy airplanes were also caused by the fact that behind the icebreaker stern, through the channel it had pierced, the submarine was on a combat mission. The night hid the movement of the caravan. Suddenly, the darkness was cut by the rays of four enemy searchlights from Strelna and lit the icebreaker. Five minutes later, the fascists began to fire the ship almost at close range. Immediately followed by a response salvo of all modest naval artillery. But to fight against large-caliber enemy guns with anti-aircraft artillery "V. Molotov "could not. And then the fire was transferred to the spotlights. Only by eliminating them, it was possible to escape from aimed fire. 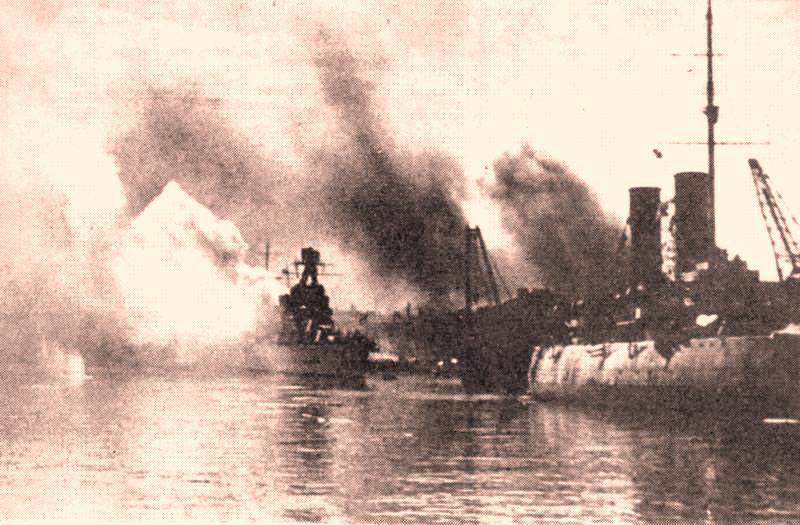 The Nazis concentrated all the fire on the icebreaker. Apparently, they did not notice the submarine sitting low in the water. This was immediately understood by the captain "V. Molotov. Since the enemy did not notice the boat, it is necessary to move away from it and divert the fire to itself. Maneuver in the ice is impossible. "We can not maneuver courses - we will maneuver speed," - decides Nikolaev. Leaving the submarine in the polynya, the icebreaker, changing speed, tried to get away from enemy fire.

Illuminated by spotlights “V. Molotov represented a good target for the enemy. The fire from Peterhof was becoming more accurate. Several shells exploded near the ship, dangling him with a hail of shrapnel. Appeared the first casualties in personnel. Six people were injured. Tools "V. Molotov "did not shut up. The battle lasted a long hour and a half. Only in the morning 8, when the ship approached Kronstadt, were the Nazis forced to cease fire. Serious injuries received in that battle from direct hits of enemy shells could not delay the exit of the icebreaker on the return flight.

The hike followed the hike. The enemy constantly fired at the ship. Military campaigns confirmed the excellent seaworthiness of the icebreaker, the strength of its hull. The crew for experience in battle deservedly received the right to be called the combat unit of the Red Banner Baltic. 25 January 1942, by a decision of the military council of the Red Banner Baltic Fleet, the naval flag was raised for military service on an icebreaker. 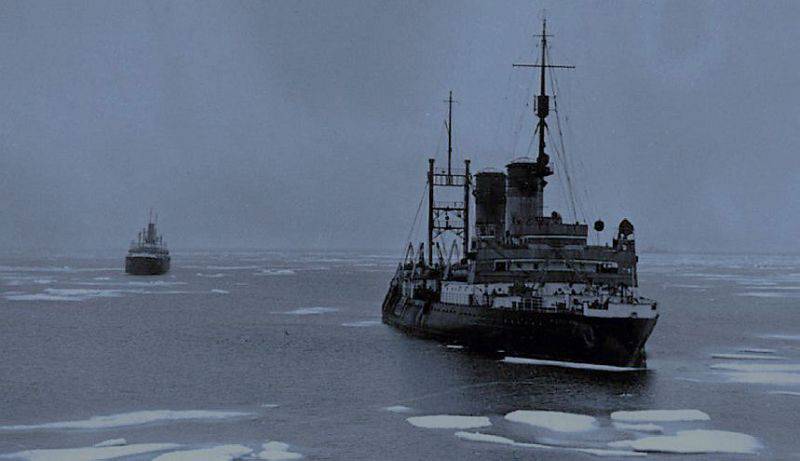 However, damage from enemy shells made themselves felt, and the icebreaker was soon put in for repair. But the ship was not only repaired. He continued to fight. Included in the air defense system of Leningrad, the icebreaker has repeatedly helped to disrupt the targeted bombing of German bombers on ships stationed on the Neva.

In the spring of 1942, the crew “V. Molotov "is called to help the hungry and frozen Leningrad. A large group of sailors is sent to work on the restoration of the Uritsky factory, kindergartens and nurseries, and residential buildings. The icebreaker personnel cleans the streets of snow, builds bridges, loads coal, delivers food.

Soon the command made a decision at the expense of the personnel “V. Molotov "manned ship crews that suffered significant losses. The most prepared sailors in groups were written off on active warships.

In August, the icebreaker 1942 left a significant part of the crew. They went to defend Leningrad on the land fronts. Only those remained on the ship who were to save it for future voyages and for servicing anti-aircraft guns in the city’s air defense system.

Despite the short duration of combat service, the icebreaker “V. Molotov and his crew honestly fulfilled their duty after passing through the hearth of the most difficult period of the war. Neither enemy fire, nor the cruel conditions of besieged Leningrad and the fierce frost of 1941, could not prevent the sailors from doing their job. This was their feat and contribution to the common Victory.