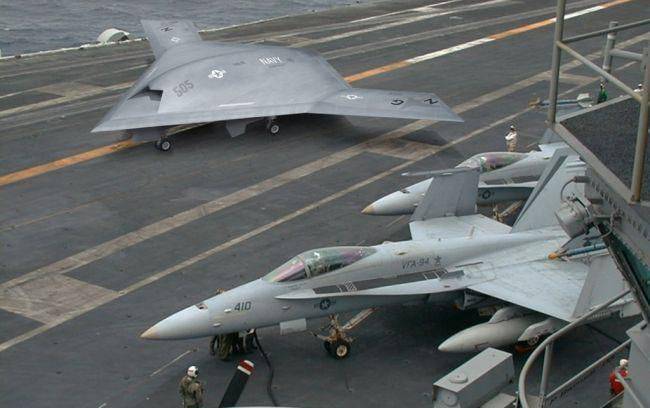 A robot cannot harm a person or by its inaction allow a person to be harmed.

- A. Azimov, Three Laws of Robotics

Isaac Asimov was wrong. Very soon, an electronic "eye" will take a man on sight, and the chip will impassively order: "Fire to kill!"

The robot is stronger than the pilot of flesh and blood. Ten, twenty, thirty hours of uninterrupted flight - he demonstrates constant cheerfulness and is ready to continue the mission. Even when the overloads reached the terrible 10 "same", filling the body with lead pain, the digital devil will retain clarity of consciousness, continuing to calmly count the course and follow the enemy.

The digital brain does not require training and regular training to maintain qualifications. Mathematical models and algorithms of behavior in the air forever loaded into the memory of the machine. Having stood in the hangar for a decade, the robot at any moment will return to the sky, taking the helm in his strong and skillful "hands".

Their hour has not yet come. In the US military (a leader in the field of technology), drones make up a third of the fleet of all aircraft in service. However, only 1% UAVs are able to use weapon.

Alas, even this is enough in abundance to sow terror in those areas that are given under hunting grounds for these ruthless steel birds.

Intelligence-impact UAV with a max. take-off weight of about 5 tons. 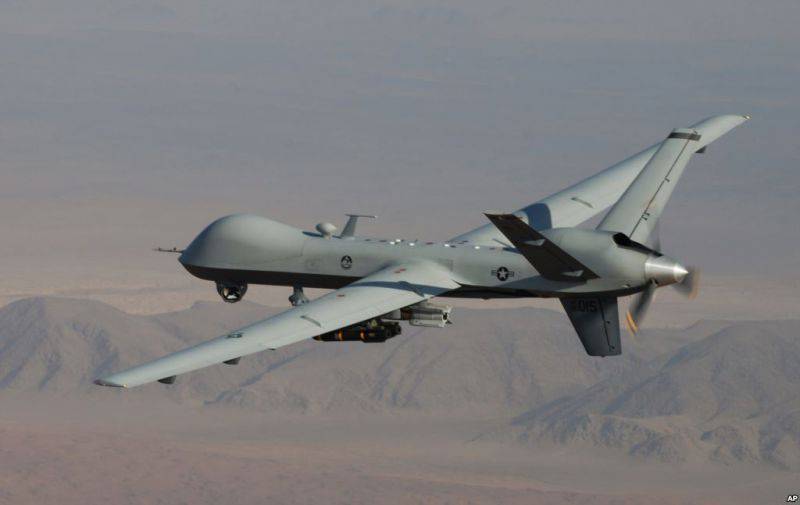 Radio-electronic equipment: AN / APY-8 radar with mapping mode (under the nose cone), MTS-B electro-optical sighting station (in a spherical module) for working in the visible and IR ranges, with an integrated target designator for highlighting targets for ammunition semi-active laser guided. 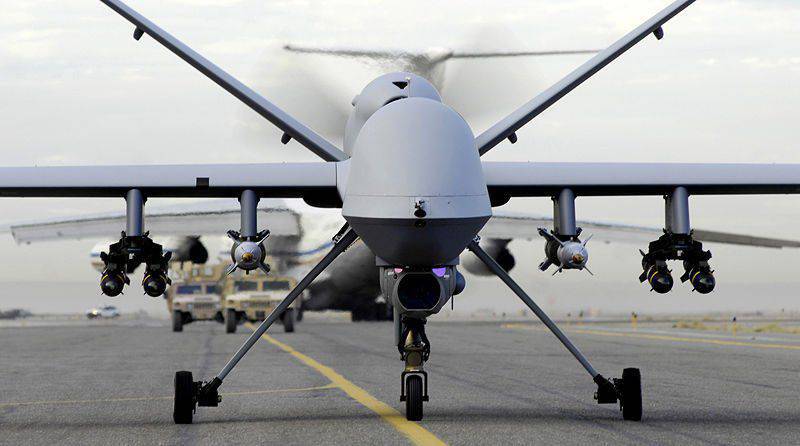 The most notorious case of combat use: in April, the third person in the leadership of Al-Qaida, Mustafa Abu Yazid, known as Sheikh al-Masri, was killed in April by 2010 in Afghanistan by hitting a MQ-9 UAV. 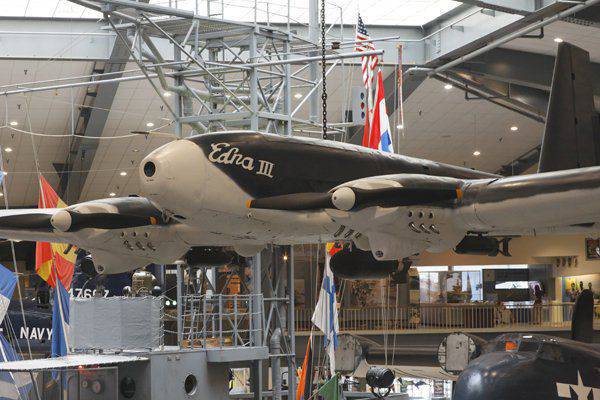 “I remember the excitement that engulfed me, when the screen was charged and covered with numerous points — it seemed to me that the telecontrol system had failed. After a moment, I realized that anti-aircraft guns were shooting! After adjusting the drone's flight, I sent it straight to the middle of the ship. At the last second, a glimpse of deck appeared in front of my gaze — so close that I could see the details. Suddenly, the screen turned into a gray static background ... Obviously, the explosion killed everyone on board. ”
- The first sortie 27 September 1944 g.

“Project Option” provided for the creation of unmanned torpedo bombers to destroy the Japanese fleet. In April 1942, the first test of the system took place - the “drone”, remotely controlled from an aircraft flying 50 km, launched an attack on the destroyer Ward. The dropped torpedo passed exactly under the keel of the destroyer. 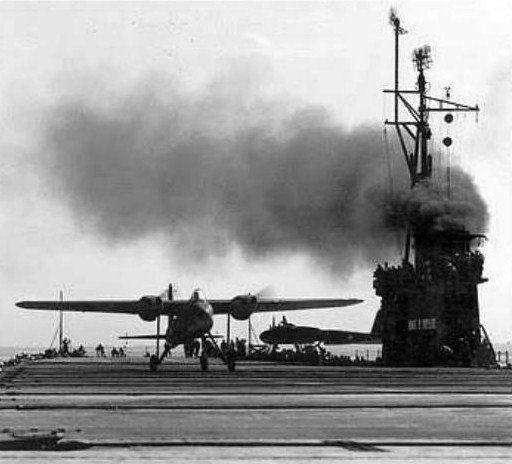 Takeoff TDR-1 from the deck of an aircraft carrier

Encouraged by the success, the fleet management had hoped to form 1943 shock squadrons as part of the 18 UAV and 1000 command “Evengers” by 162. However, the Japanese fleet was soon defeated by conventional aircraft, and the program lost priority.

The main secret of the TDR-1 was a small-sized video camera designed by Vladimir Zvorykin. With a weight of 44 kg, it had the ability to transmit images over the radio channel with a frequency of 40 frames per second.

“Project Option” is astounding with its courage and early appearance, but we still have amazing machines ahead of 3: 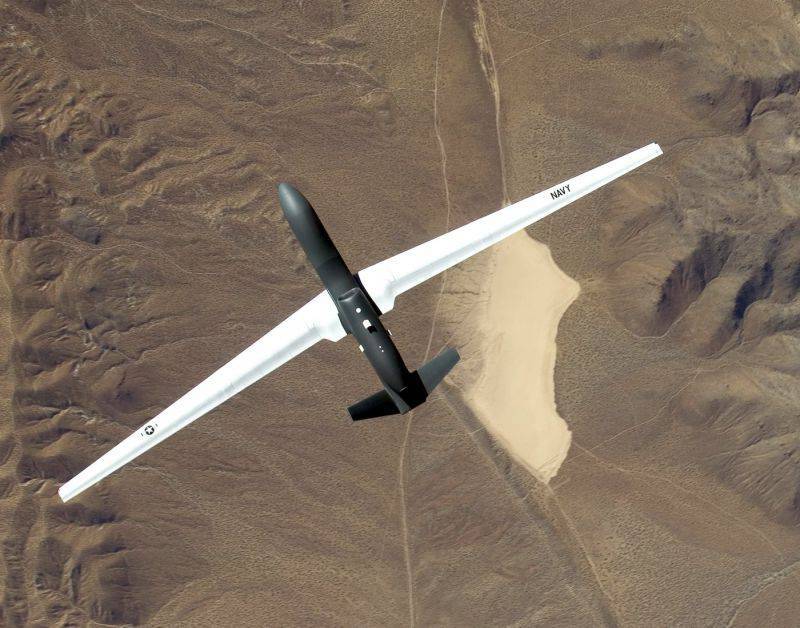 The drone is equipped with a set of reconnaissance equipment HISAR, similar to what is put on modern reconnaissance U-2. HISAR includes synthetic aperture radar, optical and thermal cameras, as well as satellite data transmission channel with a speed of 50 Mbps. It is possible to install additional equipment for conducting electronic reconnaissance.

Each UAV has a set of protective equipment, including warning stations for laser and radar irradiation, as well as an ALE-50 towed trap for diverting missiles launched through it. 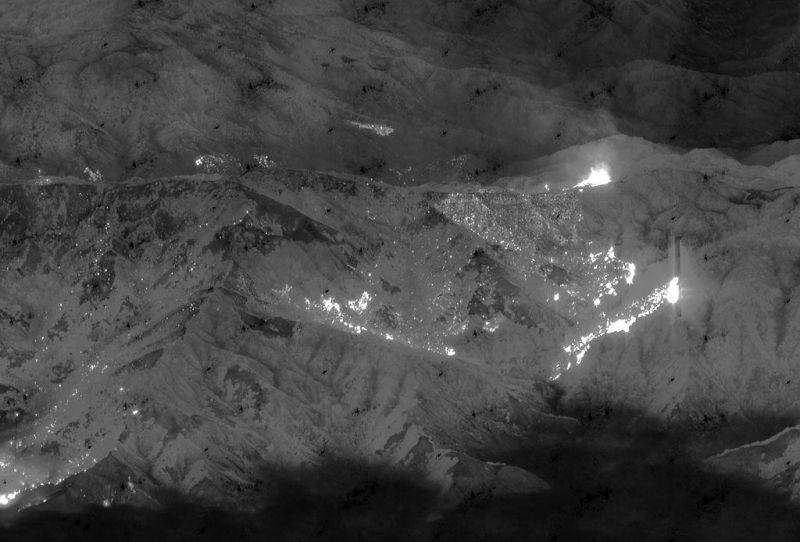 A worthy successor to the U-2 scout, hovering in the stratosphere, spreading his huge wings. Among the RQ-4 records are long-distance flights (flight from the USA to Australia, 2001), the longest flight among all UAVs (33 hours in the air, 2008), a demonstration of drone UAV refueling (2012 year). By 2013, the total RQ-4 raid exceeded 100 000 hours. 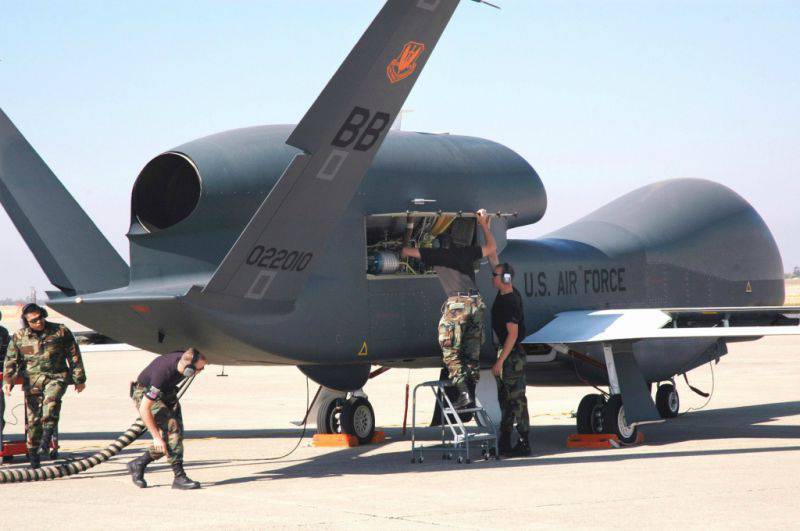 On the basis of the “Global Hawk” created drone MQ-4 “Triton”. Marine intelligence officer with a new radar, capable of inspecting 7 million square meters per day. kilometers of ocean

Global Hawk does not carry strike weapons, but deservedly falls into the list of the most dangerous drones, for knowing too much. 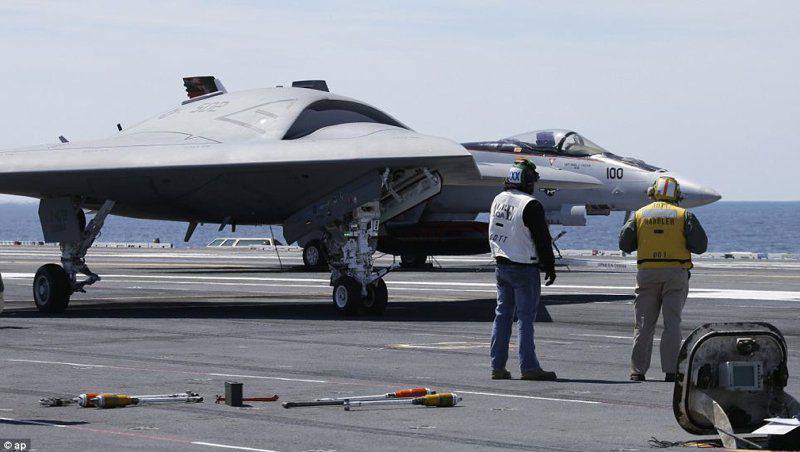 Charismatic drone, built according to the “duck” scheme, but without the use of PGO, the role of which is carried out by the carrier fuselage made by the “stealth” technology and having a negative installation angle with respect to the air flow. To consolidate the effect of the lower part of the fuselage in the nose has a shape similar to the descent apparatus of the spacecraft. 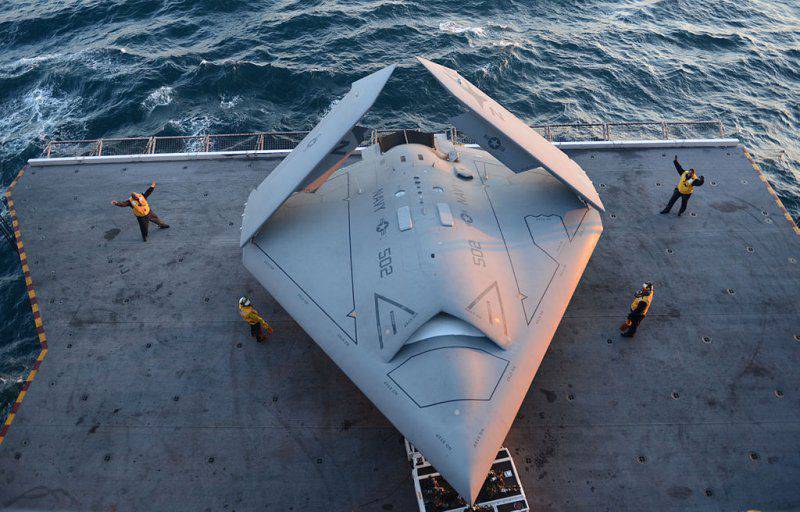 A year ago, X-47B amused the audience with its flights from the decks of aircraft carriers. Now this stage of the program is nearing completion. In the future, the appearance of an even more formidable drone X-47C with a combat load of more than four tons.

The concept of unobtrusive drone UAV from the British company BAE Systems. 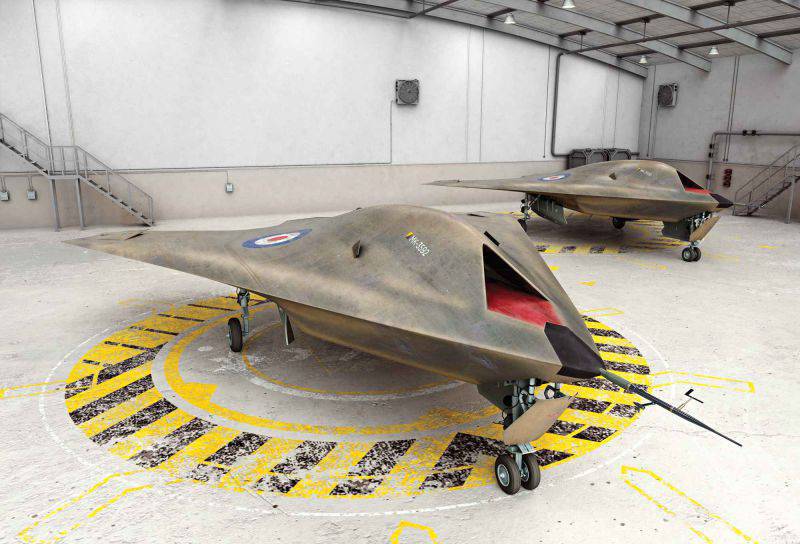 Little is known about the drone itself:
Subsonic speed.
Stealth technology.
Turbojet engine with a ton 4.
The shape, reminiscent of the Russian experimental UAV “Skat”.
Two internal armament compartment.

What is so terrible about this “Taranis”?

The goal of the program is to develop technologies for creating an autonomous, unobtrusive impact drone, which will make it possible to deliver high-precision strikes against ground targets at long range and automatically evade the enemy's weapons of destruction.

Prior to this, disputes about the possible “silencing of communication” and “interception of control” were caused only by sarcasm. Now they have completely lost their meaning: “Taranis”, in principle, is not ready for communication. He is deaf to all requests and pleas. The robot is indifferently looking for one whose appearance falls under the description of the enemy. 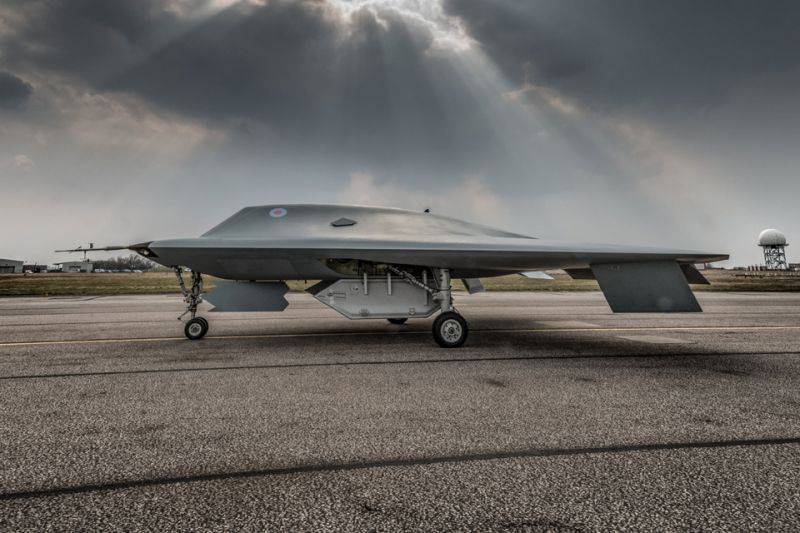 “Taranis” is just the beginning of the journey. At its base is planned to create an unmanned bomber-attack aircraft with intercontinental range. In addition, the emergence of fully autonomous drones will open the way to the creation of unmanned fighters (because the existing remotely operated UAVs are not capable of conducting air combat, due to delays in their telecontrol system).

British scientists are preparing a worthy finale to all mankind.

The war has no female face. Rather, not human.

Unmanned vehicles - a flight into the future. It brings us closer to the eternal human dream: to finally stop risking the lives of soldiers and to give military exploits to soulless machines.

Following Moore’s rule of thumb (doubling computer performance every 24 of a month), the future may come unexpectedly soon ... 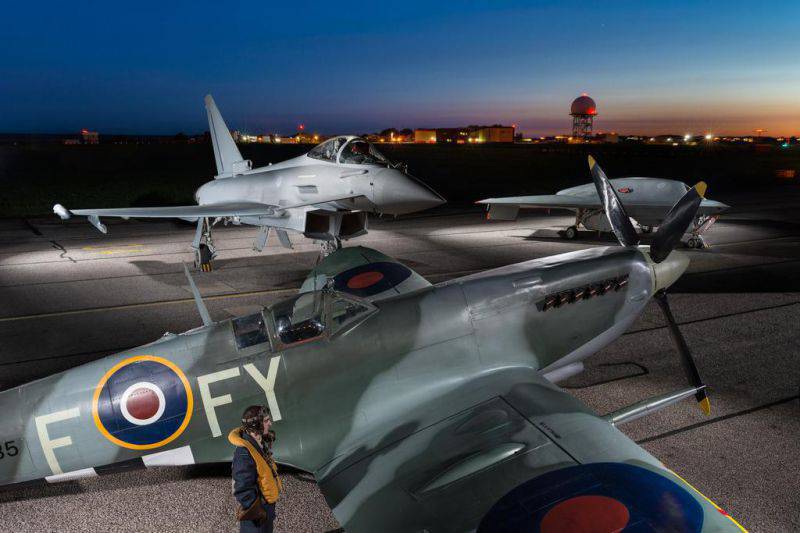 Ctrl Enter
Noticed oshЫbku Highlight text and press. Ctrl + Enter
We are
Unmanned bombers. Flight tomorrowAn-12 in Afghanistan
58 comments
Information
Dear reader, to leave comments on the publication, you must to register.