"The Eternal Enemy of the Aryan Race" 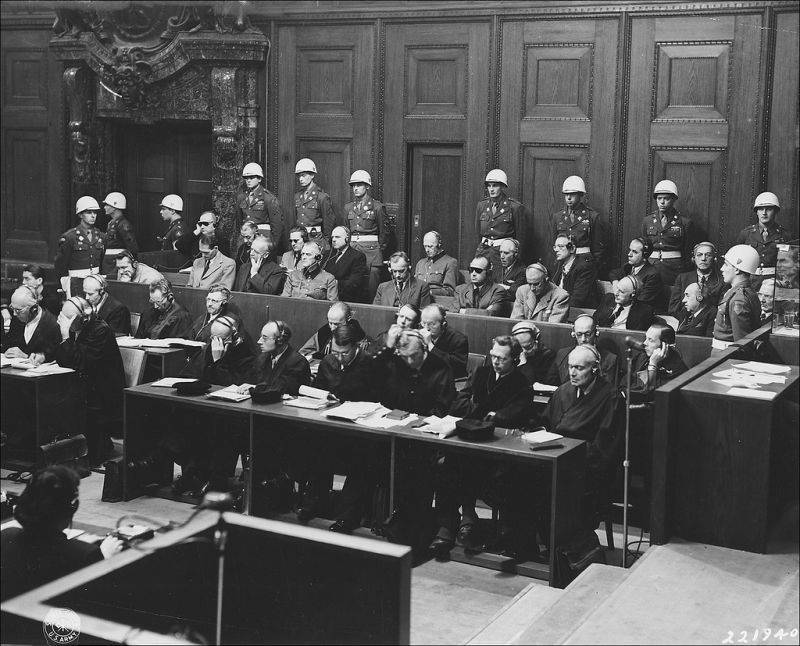 In Hitler's Reich, racism became not just state policy, but the very foundation of the state, the aim of which was the domination of the “Aryan race”. For the sake of establishing this supremacy and conquering living space for the "superior race" the Nazis unleashed World War II.

FORWARD TO THE GREAT GERMANY

To consolidate the "Aryan national community" the Nazis needed the "eternal enemy of the nation," whose role has traditionally been assigned to Jews since the Middle Ages. It is believed that the main goal of Hitler was to create a strong militarized German state - the thousand-year Third Reich, while the destruction of the Jews was assigned an important but supporting role. However, the Nazis considered the Jews the main obstacle to the revival of "Greater Germany". The order in which they solved military-political tasks and the achievement of the goals of the Second World War was the following: firstly, to destroy the Jews, and secondly, to conquer the vital space necessary for the Great German Reich. The Second World War, by definition, the Israeli scholar J. Bauer, was "a war against the Jews in the most serious sense of the word."

Even after losing the Second World War, Hitler, in the “political testament” made on the eve of suicide, called for “to strictly observe racial laws and ruthlessly resist the common poisoner of all nations - international Jewry.”

What was the “Jewish threat” to Germany and what were the Nazi racial laws?

Before 1933, the Jews were full citizens of Germany, fully integrated into all spheres of society. According to the General Directorate of the SS Security Service, in 1933, 672 thousand Jews lived in Germany, of which 515 thousand practiced Judaism. Thus, by the year the Nazis came to power, Jews constituted slightly more than 1% of the German population, which had more than 65 million people. Despite such a small percentage of the population, the Jews, before the Nazis came to power, played a prominent role in the socio-political, business, scientific and cultural life of the country.

Discrimination against Jews began immediately after Hitler came to power. In April, the Nazis launched a boycott campaign against Jewish-owned shops and shops in April 1933. In the same month, the “Law on the restoration of professional bureaucracy” was passed, which blocked the “non-Aryans” from accessing the civil service; restrictions on lawyers of Jewish origin were imposed; The expulsion of Jewish professors from higher educational institutions began, and for Jewish students the 5% norm was established. “From 1933, Jews in Germany are subject to state-legal restrictions as non-Aryans,” explained, for example, in the “People's Brockhaus” - a dictionary for school and home.

Over the years, the degree of racial intolerance of the Nazis was growing more and more: Nazi anti-Semitism was not only religious, political or social, but above all racial: Judaism was determined by blood. The Nazis attributed to the Jews not only those whose ancestors in the second generation practiced Judaism or had Jewish ancestors. Thousands of people were deprived of the Jews, or those who had moved from Judaism to another religion, including Catholic priests and nuns, as well as Protestant pastors, whose ancestors in the second generation were Jews.

15 September 1935 racial laws were proclaimed at the NSDAP convention in Nuremberg - “On the nationality of the Reich” and “On the protection of German blood and German honor”, ​​unanimously adopted by the Reichstag session, specially convened in Nuremberg on the occasion of the party congress.

According to the Law on Citizenship of the Reich, a citizen could only be someone who possesses “German or blood related to her and who by her behavior proves the desire and ability to faithfully serve the German people and the Reich.” Such a formulation actually meant the deprivation of German citizenship in the first place Jews and Gypsies.

The Law on the Protection of German Blood and German Honor prohibited the “desecration of the race” - marriage and extra-marital cohabitation between Jews and “citizens of German or kindred blood”, hiring Jewish domestic workers from women of “German or related blood” younger than 45 years, Jews would also hang a national or imperial flag and use fabrics of similar colors. Violation of the law entailed criminal prosecution.

14 November 1935 was adopted an amendment to the law on citizenship, where it was determined who is considered to be a Jew, and categories of persons with Jewish blood were set: “The Jew is the one who had three of his parents' parents were full-blooded Jews ... born in a mixed marriage, a subject of the state, descended from two full-blooded Jewish parents of his parents, if he: a) at the time of the publication of the law belonged to the Jewish community or was adopted into it later; b) at the time of the publication of the law was married to a Jew or entered into such a marriage later; d) is an illegitimate child, one of whose parents was a Jew. ” The descendants of the Jews, who were not considered Jews, were divided into two categories of “mishlings”: first, those with two of their grandparents were Jews, and the second with only one of their grandparents or one of their grandparents .

In the autumn of 1937, a systematic “ariization” began, that is, the seizure of property and property of Jews, and in 1938, the authorities introduced new coercive measures against Jews, imposed “indemnity” on them and banned theater and concert visits, completed the confiscation of “Jewish enterprises”.

On the night of 9 on 10 on November 1938, the Nazi-organized Jewish pogrom spread throughout Germany. Thousands of Jewish houses, 7500 Jewish department stores, shops and shops were crushed. Jewish cemeteries were outraged, 267 synagogues were burned and looted. 91 people were killed, hundreds committed suicide, or died later from injuries. Thousands of Jews were arrested and sent to concentration camps. The Jewish population of Germany had to pay an “expiatory fine” in the amount of 1 billion Reichsmarks, and restore all that was crushed at their own expense. Before 1 January 1939, the Jews were obliged to sell all their businesses and securities. 30 January 1939, Hitler declared in the Reichstag: “If world Jewish financial capital once again confronts the peoples of Europe in a world war, the result will not be Bolshevization of the world, and thus the victory of Jewry, but the destruction of the Jewish race in Europe.”

In the 1939 year, and especially with the outbreak of World War II, the Nazis moved from the persecution of minorities to their destruction. The mass dispatch to the gypsy concentration camps has unfolded. Already in the 1939 – 1940 years, the National Socialists embarked on deportations and episodic executions of the Jewish population of European countries: ghettoes were created in the territories occupied by Nazi troops, and the authorities developed plans to evict Jews from Europe. Finally, since 1941, after the German attack on the USSR, the systematic mass destruction of the Jewish and Gypsy population unfolded, and at the Vannzeu Conference 20 in January 1942, a plan was adopted to "finally resolve the Jewish question." In total, Nazi racial terror killed up to 6 million Jews and hundreds of thousands of Gypsies.

In the Third Reich, racial questions were handled by the “genealogical bureau” at the personal headquarters of the Reichsführer SS Heinrich Himmler, the racial affairs department under the headquarters of the Nazi Party, the relevant department of the Imperial Security Directorate General, headed by Adolf Eichmann. In total, the central office of the Nazi state, the party and the SS were engaged in the “final solution of the Jewish question” in the 124 units.

In 1943, a former officer of the personal headquarters of Himmler's Hauptsturmführer SS Erich Zilke, an expert on “race cleanliness,” was captured in Soviet captivity. Fate played a cruel joke with him. The SS man, not deprived of poorly concealed homosexual inclinations, solicited the sexual disposition of the young man who was the object of his expertise. The case was publicized: Tsilke was deprived of the SS rank, dismissed from all posts and in the rank of army captain sent to the Eastern Front, where he was captured. In the Suzdal prison camp, he was interrogated by Lieutenant Alexander Blank. After the war, Doctor of Historical Sciences A.S. Blank became one of the leading Soviet Germanists, from whom the author of this book was lucky to learn.

Professor Blank recalled: “Tsilke served under the leadership of the SS Oberführer, Dr. Walter Wüst, in the“ genealogical bureau ”at the personal headquarters of the Reich SShührer SS and was an expert on racial issues. Its functions were to, in controversial and not sufficiently clear cases, make a final conclusion about the "purity of the race." Under the conditions of Nazi Germany, there were frequent cases when Jews used to get new, “Aryan” documents by hook or by crook, changed their names, tried to save lives, for example, from half-breeds by quarter-bloods, this gave a chance for salvation. In short, many tried to “improve” their ancestry by at least one step. Some have succeeded. But when something aroused suspicion or there was a denunciation to the Gestapo, and there was no documentary evidence of the forgery, in a word, when the case was complicated and complicated, then Erich Tsilke was called for examination. How did Zilke spend his expertise? At first, he “made some kind of lively conversation with the subject. I observed how he laughs, reacts to jokes, gestures, how quickly he comes in contact - in a word, all his behavior during a lively, easy-going and witty conversation without tension. ” This was the first stage of verification. At the second stage, the person being checked was officially called in to the Gestapo, where they measured the distance between the eyes, the height of the forehead, the shape of the nose, the length of the neck, etc. But the most important indicator for Zilke was his eyes. “What-that, and the eyes could never deceive me,” Tsilke argued. “Looking into them, I saw the“ world grief ”of millennia, if it was present there.” According to the “Tsilke formula,” with one-eighth and even one-fourth Jewish blood, “world grief” was not viewed, and with “pure blood” and “half-blood”, certainly. Based on the findings of Zilke, hundreds of people were sent to extermination camps - to gas chambers and crematorium furnaces. ”

The national socialist regime planned a mass extermination of other "non-Aryan" European nations, in particular the Slavs. The Ost master plan envisaged the enslavement, expulsion or destruction of more than 30 million Poles, Russians, Ukrainians, Belarusians and settlement on the lands of the Nazi-era Poland and the European part of the Soviet Union 5 million Germans.

As part of the “racial hygiene” policy, the Nazi regime cracked down on the Germans who, in his opinion, were engaged in “spoiling the race” or “degenerated” - “asocial” elements and mentally ill. Already in the 1933 year, laws were passed on the forced sterilization of "asocial" persons and people who, as the Nazis feared, could give "offspring suffering from hereditary diseases." In the 1935, an abortion was introduced according to genetic and hereditary indications; those who were recognized as sick were forbidden from marrying. In 1937 – 1938, the years of “antisocial” began to be sent en masse to concentration camps. In 1939, the authorities introduced a program of euthanasia for mentally ill and hereditarily sick children, in 1940-m extended it to adults and to "anti-social" elements, and in 1942, prisoners belonging to this latter category were transferred to the SS for "destruction through labor." In total, at the hands of the Nazis killed at least 70 thousand people declared "insane."

Ctrl Enter
Noticed oshЫbku Highlight text and press. Ctrl + Enter
We are
Prostitution in the Third Reich: rare archival footageMyths of the Great Patriotic. Papier mache helmet
57 comments
Information
Dear reader, to leave comments on the publication, you must to register.