21 September 2015
26
For effective artillery strikes, accurate target coordinates and fire adjustment are required. In this case, the artillery gets the opportunity not only to attack the target, but also to correct the mistakes made, covering it with a new volley. Over the past few decades, so-called “military forces” have been used in the domestic ground forces. mobile reconnaissance points of several models, whose task is to find targets for artillery and adjust fire during combat. The newest representative of this family is the Argus PRP-XNUMHA.


The mobile reconnaissance point PDP-4A "Argus" is a further development of the family of such equipment and is a modernized version of the PDP-4М "Deuterium", which has been widely spread in the ground forces. In connection with the need to improve the characteristics of the reconnaissance point, primarily the range and the probability of detecting various targets, a new draft PDP-4A was developed. The main difference of the new machine for spotters is the updated composition of the target equipment.

The Argus project was developed by the Rubtsovsk branch of the Uralvagonzavod corporation (the former Rubtsovsk machine-building plant). Works on this project, according to available data, started in the second half of the last decade. The finished model of a promising machine was first shown to the general public at the Russia Arms Expo in 2013. Subsequently, the mobile reconnaissance point was tested and put into service.

Like the previous vehicles of the family, the mobile reconnaissance point of the PDP-4 "Argus" is based on the BMP-1 / 2 chassis. The base machine receives a new turret with a set of special equipment and simplified weapons. In addition, part of the equipment for searching for targets and data processing is mounted in the troop compartment. The rest of the base chassis does not undergo any noticeable changes and retains the main characteristics at the level of the BMP-1.

During the construction of an artillery reconnaissance vehicle, the main features of the chassis are preserved. For this reason, PRP-4А has anti-bullet reservation and is protected only from small weapons. The layout of the body corresponds to the base BMP-1 / 2. The UTD-20C1 diesel engine with 300 horsepower is located in the front of the hull. and manual transmission, transmitting torque to the front drive wheels. Behind the engine is the workplace of the driver, behind which there is a fighting compartment with weapons and part of special equipment. Other equipment is placed in the stern of the hull.

In terms of size and weight of the PDP-4A, the Argus hardly differs from the relatively old BMP. The combat weight of this machine is 13,8 t. Due to the preservation of the “old” engine, the new machine does not differ in its mobility from the base BMP. The maximum speed on the highway is declared at the level of 65 km / h, the power reserve is 550 km. If necessary, the reconnaissance point can cross water obstacles by swimming at a speed of up to 7 km / h. Movement through the water is carried out by rewinding the tracks. At the same time, special shields in the rear of the hull increase the thrust generated by the stream of discarded water.

On the chase of the corps it is proposed to mount the tower with weapons and a set of special equipment. The tower machine PRP-4А is a modified version of the combat module BMP-1. In front of the tower, made in the form of a low truncated cone, mounted machine gun and smoke grenade launchers. On the sides and the roof are several armor covers with special equipment to monitor the situation and search for targets. 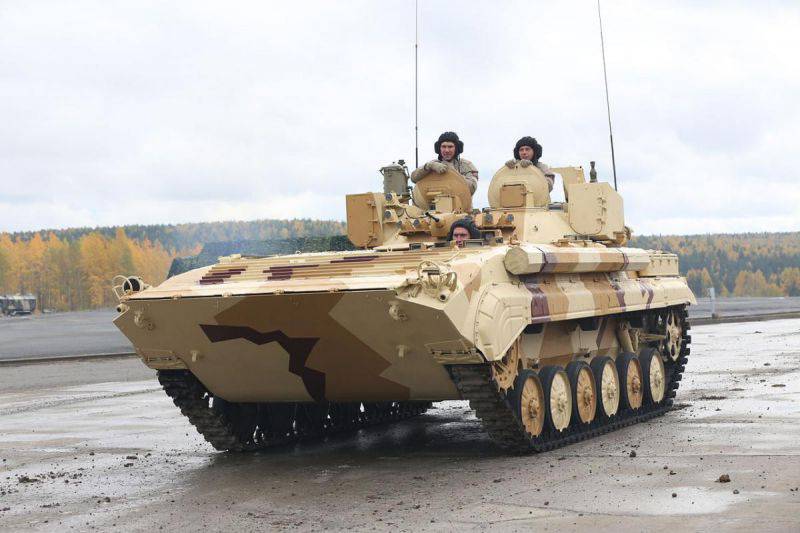 The machine "Argus" should not engage in open battle with the enemy, because of which it has only light weapons for self-defense. In the frontal part of the tower, it is proposed to mount a PKTM machine gun of 7,62 caliber mm with 1000 ammunition ammunition. Also in case of detection by the enemy machine has several smoke grenade launchers, located on the sides of the machine gun. All this equipment allows the crew to leave the danger zone under the protection of a smoke screen or engage in battle with the enemy infantry. Also, to protect against detection, the machine can be equipped with camouflage nets and special heat shields, reducing visibility for various media.

The crew of the PDP-4A has a set of various means for monitoring the environment. As a simplified means of observation, two periscopic devices should be used on the roof of the tower. At the same time, the main tools for finding targets and determining their coordinates are two other devices, the opto-electronic units of which are located in housings on the sides of the tower. It is proposed to monitor the situation and visual search for targets using the 1PN125 active-impulse device and the 1PNX126 thermal imager.

If necessary, the crew of the Argus can deploy a remote observation point. For this purpose it is proposed to use a set of special optical-electronic equipment carried by the machine. Thus, it becomes possible to more effectively track the terrain and search for targets.

In the aft part of the tower, an armor cover with a lifting cover is provided, in which a retractable antenna of the radar station is carried in the stowed position. As an all-weather surveillance tool capable of working at any time of the day, PDP-4А uses 1Л120-1 radar. This system provides an overview of the large sector of the front hemisphere and is capable of detecting enemy armored vehicles, structures and other objects.

The maximum detection and recognition range depends on the type of target and equipment used, as well as on a number of other factors. For example, a tank-type target, standing in an open area without any means of camouflage, can be seen during the day at a distance of 8 km. When using thermal imaging equipment, the detection range of such an object is reduced to 3 km. An enemy tank, covered by a camouflage net and not standing out against the terrain in the infrared, can be detected from a distance of 2 km. The radar station does not depend on the time of day or weather conditions, so the range of detection of moving tanks always exceeds 12 km. 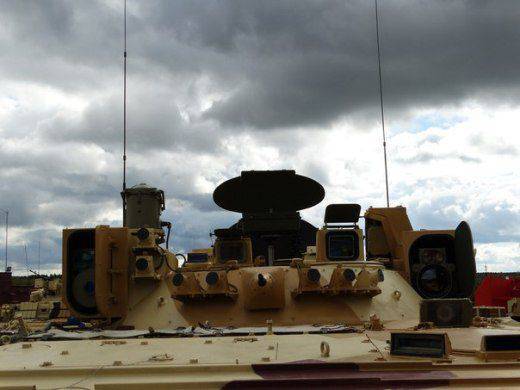 Accurate determination of the distance to the target is made using a radar or laser rangefinder. The distance to tanks, armored vehicles or other objects of similar size is determined by the range finder at distances up to 10 km. In the case of high-rise buildings or large elements of the landscape, the maximum measurement range of this device is increased to 25 km.

The location of the detected object is determined with a sufficiently high accuracy. The median error in determining the coordinates of the target when using optical-electronic systems does not exceed 20 m. For 1L120-1 radar, this parameter reaches 40 m.

To calculate its own coordinates and the exact location of the found target, the ARPUS XEP-4A is equipped with a navigation system and a set of special equipment. Automation takes into account all the parameters, such as its own location, direction to the target and the distance to it, and then calculates the coordinates of the detected object. Data on the target is transmitted to the command post of artillery. The electronic equipment of a mobile reconnaissance point allows you to process and store information about the situation on the battlefield. Available communications provide data transmission over a distance of 50 km. It takes about 2 minutes to switch on all the equipment and transfer the machine from the traveling to the combat position.

The complex of the targeted equipment of the PRP-4A machine allows you to monitor the terrain and search for various targets, and after detecting them, issue target designation of artillery. In addition, the crew of the "Argus" can carry out the adjustment of artillery fire, reporting on the necessary amendments. If the enemy detects a mobile reconnaissance point, it can respond with a machine-gun fire or leave under the cover of a smoke screen. 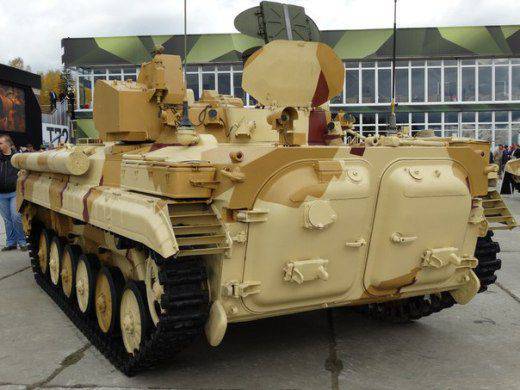 At the beginning of this decade, the Rubtsovsk Machine-Building Plant built several prototypes of the PRP-4A reconnaissance center and conducted their tests. According to the results of tests, the new machine for the ground forces was recommended for adoption and series production.

Serial production of reconnaissance machines such as PRP-4A "Argus" started a few years ago. The first production vehicles were handed over to the troops back in 2012. In 2013, a number of intelligence points were transferred to parts of the Southern Military District. In the autumn of the same year, this technique took part in the exercises of rocket troops and artillery, where it was used to search for targets day and night.

Not so long ago, all those who wished could watch the work of the mobile reconnaissance points of the RPP-4A “Argus”. This equipment took an active part in the exponential program of the recent exhibition Russia Arms Expo 2015. During artillery firing at a conditional enemy, the Argus reconnaissance vehicle assisted by self-propelled artillery installations 2C19 Msta-S assisted the enemy. They conducted a search for targets, gave target designation to the gunners, and monitored the results of the shooting.

Over time, the mobile reconnaissance points of the RPP-4A "Argus" should become the main means of observation and reconnaissance in the interests of artillery. Within a few years, this technique must completely replace the remaining in the army machine family PRP-4 previous modifications. Due to the use of a number of new equipment, modern reconnaissance points are superior in their characteristics and efficiency to existing equipment of this class and are able to fully accomplish the tasks assigned, supplying artillery with information about targets.