22 September 2015
8
Very often it used to be like this: a person made a drawing with ink on a drawing pen (everyone used to know what a drawing pen is, now my students don’t know this!) And ... he had such thoughts - “I am an inventor, I can offer something interesting for production”. There was even such a profession - a “draftsman" - who himself could not do anything, but drew like a god! However, there were also engineers who either drew well or hired draftsmen, and now the “blueprints” were ready, on the basis of which they were declared “creators”, “inventors”, and “founders”. But people who were not knowledgeable in technology did not ask: where are the calculations of specific pressure, power, friction losses in the transmission, weight distribution ... The movie also threw us the visual image of such “drawings” - the scout clicks the “match” camera over the sheets of paper and here already "blueprints" of the secret German tank on the table at the Soviet command. Remember the “captain Kloss” (Stanislav Mikulsky) from “Bet More than Life” ... There it was! In fact, this is only a general scheme and it does not give much for technical implementation in metal! The drawings are a railway WAGON of sheets of different formats, these are the numbers of steel grades, rolled profiles, there are so many things that it’s so easy you won’t steal and re-shoot! 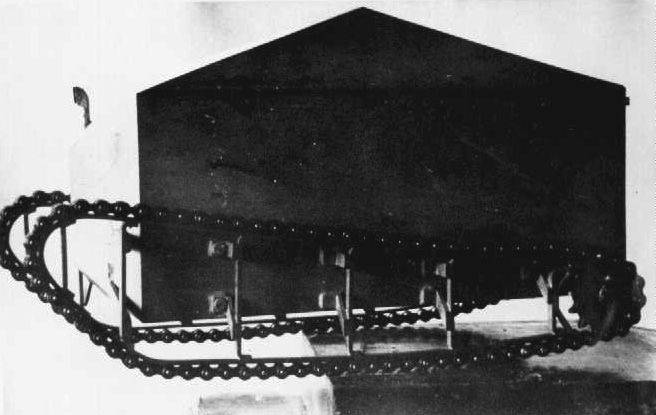 The layout of the "tank" Nestfield.

That is why the project of the famous "Mendeleev Tank" is nothing more than a mind game, and its popular "drawings", which have bypassed a lot of publications, are nothing more than ... schemes that really mean very little. Well, as an example of the fact that this is how it is, let's look at the “drawings” and get acquainted with the development of the little-known in our country and even at home the engineer Robert Francis MacFay - the creator of the world's first amphibious tank.

The talented Scottish-Canadian engineer and aviator began by flying three planes between 1909 and 1911, traveling a lot and seeing Holt tractors in action on plantations in the West Indies before World War I. Therefore, it is hardly necessary to be surprised that when the war began, he became an ardent fan of equipping the army with armored vehicles and began to construct it himself!

At first, he used his connections with the Royal Air Force to contact military officials, who, incidentally, were decidedly indifferent to his ideas. Then he contacted Commodore Murray Suter in RNA and expressed to him his idea that the wheeled BA should be replaced with tracked tracklayers. McFay's proposal was discussed along with the ideas of other officers, along with the proposal of Captain Thomas Hetherington, who proposed his famous tank project on huge wheels.

McFyy made a memo that he sent to Sueter in November 1914, outlining how six Holt tractors could haul an 85-tonne transporter with a twelve-inch ship's gun along broken roads with great ease. Sueter told MalFay that transporting the guns was a matter for the future, and the main thing now was “tanks”.

By February 1915, Hetherington's project had already been rejected, and W. Churchill formed the "Committee of Landships", at the first meeting of which on February 22, 1915, McPhee was present. He asked Suater for ... money (what else could an engineer ask for for his work?) And received £ 700 from him (a large sum for that time). And he in turn instructed Nesfield & McKenzie, a small engineering firm in West London, to provide McFly with all the necessary technical assistance.

After that, he took the old truck as a basis for experiments, and Albert Nesfield had to put it on the tracks. Little is known about this "car", but Nesfield later claimed that MacFy used two pairs of tracks in his design, and the front pair was steering. Nesfield meanwhile developed his project with one pair of tracks, with an individual drive for each, which made it possible to brake and turn at the expense of slowing down their movement. He also built an electrically operated model in which bicycle chains were used for the tracks. The photograph of the model shows that the result is a chassis very similar to modern models of tracked propulsion, if not in design, then at least bypass shape!

After that, Nesfield and McFay quarreled, and very strongly. In any case, Souter described their clash as "ordinary dog ​​fights." Suether asked a certain Boothby to try to convince MacFay and Nesfield to settle their differences, but in vain. But ... nothing came of these attempts, and in August 1915 ordered Souter to work on their project no longer funded. MakFay was offended that he was "misunderstood" and in November 1915 resigned, claiming that his designs had been stolen from him. In the Land Ship Committee, Albert Stern was very happy about this, because he was "a very troublesome guy" and "the most impossible person he has ever worked with." Like this! And we think that the British were engaged only in those that created their own tank! Not! They even squabbled, squandered the scores, and slandered, and “squeezed” the money, that is, “just lived,” like all people live!

Stern had another meeting with MacPhay in December 1916 of the year (this is how the scene in modern cinema seems to be: “I will give you one more chance!”). He asked him to show his designs, promising that he would get a fair trial, but McFay refused. That is, I did not use my last chance. But he conducted a vicious campaign of reproach against Nesfield, which ended only in the 1919 year. So, again, there they were arguing about priority, almost like the same Powder collectors here, who tried to prove through newspapers that the first tank was a Russian invention. But at least he advocated for the country, but Macfay simply sought recognition of his own importance.

Ultimately, in spite of his undoubted engineering skills, the contribution of McFay to the development of armored vehicles, in addition to his important statements at the first meeting of the Committee, turned out to be much less than it could be. The reason for this lies in the fact that he had an unsociable character, he was touchy beyond measure and was not restrained into the language. 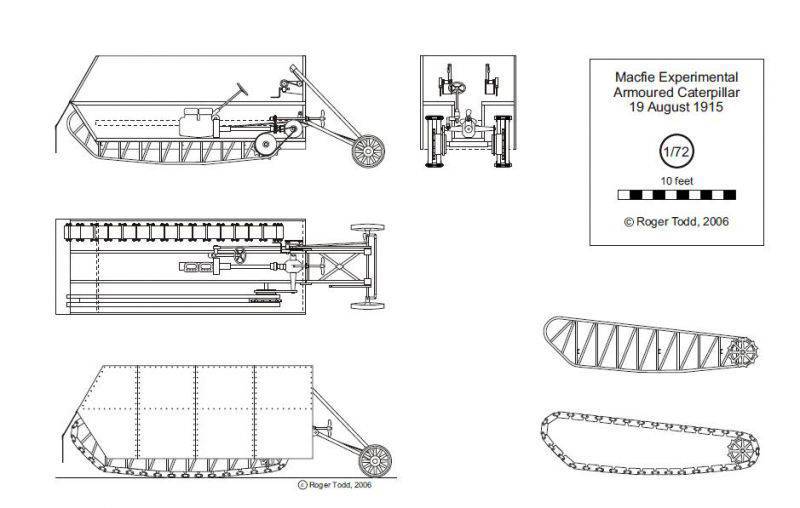 Revised Draft from 19 August 1915: “Experimental Armored Caterpillar”. As it can be clearly seen, the car is similar to the “Little Willie”, although the weapons are not shown on it. But shows the rear steering wheels and propeller. However, the wheels, in contrast to the "Willy", do not have clamping springs and only put their weight on the ground. And it is unlikely that their pressure would be enough to make this tank turn. And again - and how to seal it?

Well, what did MacFay and Nestfield come up with and what “drawings” were drawn? In any case, McFay's patents prove that he ... was the first in the world to invent an amphibious tank on three tracks. Moreover, the front was steering and could be rotated in both vertical and horizontal planes. At the same time, if we look at his scheme, we will see that he does not even show the drive of the tracks from the engine! Yes, the bevel gears of the drive of the driving wheels are both on the front track and on the two rear ones, but ... the engine itself is absent in the diagram. “If we abstract from the difficulties of technical implementation ... then ...” But how can we abstract from them?

Next on the diagram there is a swinging propeller. But how it will recline and fixed is not shown. The “tank” of MacFay looks very narrow, that is, on the battlefield, he could easily tip over. The front steering caterpillar has a very sophisticated steering gear and a lifting system to overcome obstacles. Although he even provided for her armored front and cutter for barbed wire! However, the most important and insidious question is how to seal the whole mechanism so that this “monster” could swim ?! 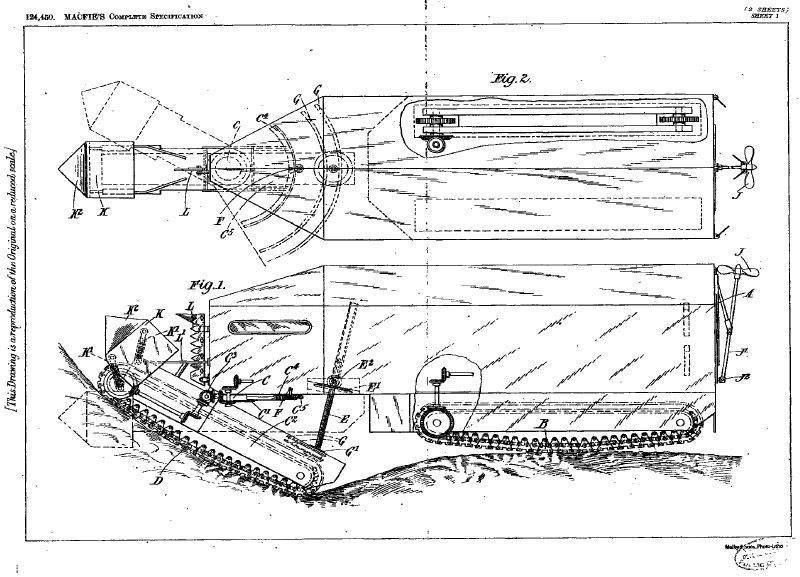 Not shown and the location of weapons. It seems to be a place for him in the front. But what about the weight distribution? After all, the car is floating! That is, all this is nothing more than technical speculation, which has no real meaning! 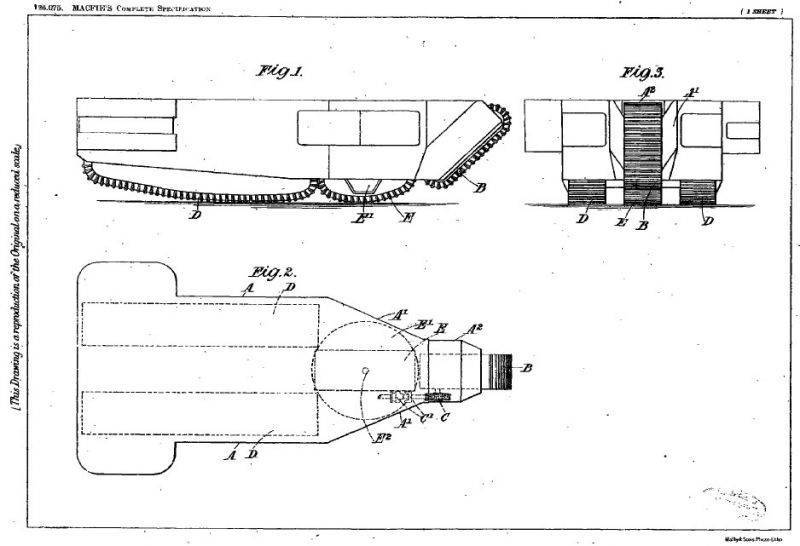 Finally, his last development: four-track tank. Moreover, the second front caterpillar on it was swiveling, and all four had a drive. That is, unlike the “Mother” tank, the MacPhai machine did not have a caterpillar rim around the hull, but thanks to the front caterpillar with a drive, it could take very steep obstacles. There could be four combat posts on this tank at once! Two at the front and two at the back, not to mention the tower above. But ... and how was the engine, fuel tanks, transmission located on it? That is, this project was even more raw than the first two! And what is there to be proud of? With your ability to draw such schemes well? For the engineer of those years it was the norm, the basic level of engineering education and technical literacy! So it is not surprising that in the same England no one considers McFay's projects to be breakthrough and does not consider the creators of the world's first amphibious tank (even at the project level!)!

Ctrl Enter
Noticed oshЫbku Highlight text and press. Ctrl + Enter
We are
Middle tanks in the postwar period. "432 Object"Wunderwaffe for Pantservaffe. Description of the design of the tank "Mouse"
Military Reviewin Yandex News
Military Reviewin Google News
8 comments
Information
Dear reader, to leave comments on the publication, you must sign in.