You need to relax, Mustafa!

22 September 2015
30
- You need to relax, Mustafa!
- I have no time to rest, I think everything about the indigenous people, Refat Abdurakhmanovich.


Block, send "trains of friendship", burn everyone ... This is not the whole list of voiced fantasies of the deputies of the neo-Nazi Rada regarding the Crimea. With all such "philanthropy", they do not forget to clarify that the majority of Crimeans have already "waited" for a return to Ukraine and are very "suffering" under the yoke of the "occupiers." 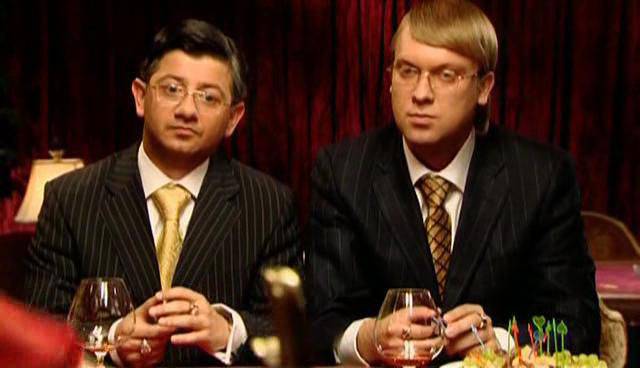 If Islamists from all over the world gathered in the Islamic State, then all the Nazis gathered in Ukraine. But this is not enough. Once again, the leaders of the organized criminal group Mejlis decided to arrange competition for the IG terrorists and create the Muslim battalion "Crimea". But due to the fact that it is terrible for the “heroes” to collect mines on Perekop with the fifth point, they found a slightly different use: to fight with truckers. However, the Mejlis did not have to share the laurels of the “heroes of Ukraine” in the media alone: ​​the Right Sector joined the action. Here, reinforcements from the Armed Forces of the Russian Federation at the border will come in very handy if the situation gets out of control, and the "pravoseki" will fight with the Majlis for another truck. Moreover, the Crimean Tatar extremists have already proposed to create markets on the border with the Crimea, so that "the money remained in Ukraine." The main thing is that in the "right" hands ...

Having received a million euros in Poland, the repressed representative of the “true Crimeans”, in particular need of humanitarian aid, began to spoil the peaceful life of the peninsula with even greater zeal. It was somehow not immediately wondered with partisan ... But he and his supporters did not become discouraged by misfortune. In the head of the "patriots" matured sly plan! If the Crimeans cut down the light and deprive them of food, a hungry riot will immediately sweep away the “occupying” power, and the leaders of the Mejlis will solemnly ascend to the throne to the applause of the West. Probably that is what they think. Well, let's leave it on their conscience and try to sort out the details.

According to the Ministry of Transport of Crimea, in the 2014 year, the 72 thousand trucks were transported via the Kerch ferry. In the first two months, 2015 of the year transported over 24 thousand trucks. The increase in cargo traffic from Russia is evident. Ukrainian sources in the summer reported 400-500 wagons a day, coming from Ukraine. Thus, it turns out that there are as many trucks now coming out of Ukraine as from the strait (taking into account the storm factor). The number of goods on the Crimean shelves until approximately corresponds to this ratio.

It is known that after reconstruction the ferry is capable of passing thousands of trucks per day (both ways). True, in this case, Ukrainian goods will finally be ousted from the market. It is very "patriotic" to lose the market on 475 million dollars (Chubarov data) for a country with a record drop in GDP ...

Two ferries from Novorossiysk also go to the Crimea: "Poseidon Express" and "Novorossiysk", which together can transport up to 20 thousand tons a day in a day. It is also planned to launch another 2 ferry to Sevastopol.

Ctrl Enter
Noticed oshЫbku Highlight text and press. Ctrl + Enter
We are
Hidden MajlisWhat you didn't want to know about England
30 comments
Information
Dear reader, to leave comments on the publication, you must to register.