23 September 2015
4
There is no more evidence than eyewitness accounts. Here I will be based on this data and memories in this article. One of the articles by Dmitry Sanin caused a big question to me. I know him well and respect him - it is always difficult to carry out search work, participate in excavations and establish the truth, it is noble work. But truth is always born in disputes and clarifications. 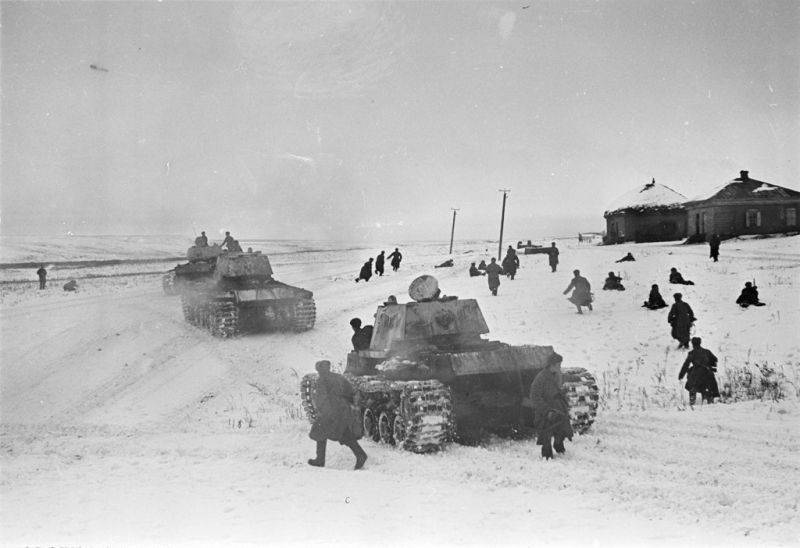 In Sanin's article, “How and Who Liberated Tselina,” many facts are reported. First, the “terrible battles for Tselina” are mentioned on January 23, 1943 Here are brief excerpts from this article: “... Enemy by force: to the motorized infantry regiment, 8-10 tanks... 3-4 mortar batteries, continued fierce resistance and twice went over to the counterattack ... There was also a fierce battle at the railway station ... "

And then it: “... By order of the commander of the 34 Guards Rifle Division, Guards Major General Gubarevich, part of the division in 18.00, supported by the 84 Guards artillery regiment, went on the attack to destroy the enemy in the village of Tselina ... After a ten-hour battle, which ended in 24.00, our troops fully managed to capture the village of Celina ... "

At the end of the article, a summary of the battles for Tselin is summarized: “... With the release of Tselina, units of the 34 Guards Rifle Division lost the killed 85 people, the wounded 130. At 84-th Guards artillery regiment lined one gun. 6-I Guards Tank Brigade lost 3 people killed, among them a tank driver, 13 people wounded, and one T-70 tank was burned. The enemy had over 40 vehicles destroyed, two 105 mm guns, two tanks were burned and up to two infantry companies were destroyed. As trophies, 2 large warehouses with grain, one wounded Heinkel-126 aircraft, 20 light machine guns, up to 30 rifles, two defective anti-aircraft guns, 50 freight cars, two railway tanks with gasoline ... ”

These fierce battles and big losses for the release of Tselina are described in an article based on archival data.

72 of the year passed after the liberation of Celina from the fascist occupation, many memoirs of the participants, witnesses of those events were published. And they say that already early in the morning of January 23 there was an unusual silence over the village. German units from the village fled before the end of the day on January 22. And in the late evening (from the memoirs of the ordinary soldier MA Habbulin):

“Our unit entered Zeleny without a fight, from the western side, since we were met by machine-gun fire from the eastern outskirts from the elevator.

Several soldiers were killed. In the village, we were quartered home, where we had dried boots, after rain, clothes, and in the morning we moved further west. I was seriously wounded at the Balabanovka farm in the battle. ”

Confirmation of these data - memories of a resident of Tselina Klavdiya Fodotovna Marakhovskaya 92-s: “... In our apartment on the 1 line of hours at 11 on the night of January 22, the Soviet soldier was drying his boots at the stove, and in the morning went to the unit."

This is what the natives of Celina, the then children of 7-8, recall. Now it is Yury Alexandrovich Petrov - the colonel, Victor Fedorovich Nedviga - the local surgeon, Leonid Grigorievich Mironenko - the civil engineer.

“Early in the morning,” writes Yury Alexandrovich Petrov, “the parents said:“ There are no Germans anymore, ”and my cousin Misha and I went from the barracks of the state farm, where we lived, to the elevator and saw several people killed in a small snow nearby, and at the railway crossing the profiled road was a 2 tank. Another was attached to one; three soldiers stood nearby, spoke Russian quietly. We were afraid to go there, the dead were also there. ”

Viktor Nedvig ran into the memory of the following case: “On this day, 22, the German was looking to the east with his binoculars for a long time. When he saw me, he cried out: “Partizan!”, And I ran away. ”

“On January 22, the Germans were driving cars, motorcycles, with whole guns fled from Tselina,” recalls L.G. Mironenko. - Traces of hostilities, battles with the enemy in the village was not observed. In different places, they were just gaping craters from the explosions of bombs and shells of the 42 year. There were many unexploded bombs in the war: on the 1 line, in the Northern Farm, on Frunze Street ... At the 4 line, for example, a huge bomb weighing 250 kilograms deeply crashed into the ground, leaving a half-meter funnel fenced with barbed wire for a long time reminded of bombings until regional sappers removed it and took it away. ”

Many other memories, which are described in the article by Dmitry Sanin to the smallest episodes, did take place during the liberation of the entire Tselinsky district, but not at all in the village of Celina.

The data of the Central archives of the country 42-year-old, used in the preparation of the report on the day of the 30 anniversary of the liberation of the Tselinsky district from the Nazi invaders: “... There was only one grader road from Salsk through Tselina to Rostov along the offensive line. This complicated the actions of the advancing troops. The enemy has created a number of intermediate lines in front of the 28 army. Among them are defensive lines - Maysky, Tselina, Stepnoye, Zhuravlevsky, Olshansky, Mechetinsky, Zernogradsky and others. ”

"... The enemy in the villages of Zhuravlevka, Fertile, Khleborobnoe” stubbornly resisted the troops of the 51 Army.

In the archives of that time, the names of our military units, the names of their commanders, actions in battles on the land of the virgin lands were described in more detail.

It was further reported: “In the battles for Tselina and Tselinsky district, the fighters and the commander of the 28 and 51 armies distinguished themselves. Among them are the Guard Major Kudryavtsev. ”

I emphasize once again: the article by Dmitry Sanin, compiled on archival data, describes the actions that took place on the territory of the Tselinsky district as a whole, and not in the village of Tselina. Then everything falls into place.

I absolutely do not want to blame the author - he told the reader the facts that are preserved in the archives of the Ministry of Defense. All major or minor combat operations, long, short battles, to the smallest possible detail, were transferred to the headquarters of military units, up to army headquarters for awards and subsequent transfer to the archive.

In our case, apparently, the order was given: “Describe the full picture of the battles for the virgin lands”, meaning fairly the vast expanses of the virgin land of the Rostov region. And someone transferred all these battles with a huge amount of manpower on both sides, tanks, guns, mortars, cars and motorcycles to a small village of 7 lines and 7 streets ...

In real life, not everything is so simple. Living witnesses often correct mistakes that were made in wartime due to the rapid change of the situation, dislocation, lack of time.

Another undisclosed page of the war. One of the most difficult cases is to fix historyand even harder is to look for new facts, evidence. The story - like the flow of a river - is mobile, and sometimes you can’t guess what the next moment will reveal unexplored depths. Many unsolved pages are fraught with the period of the Great Patriotic War. It was possible to find the names of those fighters who died during the liberation of the village of Celina along with a long-time friend of local historian Semyon Kuzmich Debely - Svetlana Borisovna Tonkosurova. Here is one of the recent letters that Semyon Kuzmich received from Chebarkul, where she lives.

“Hello, dear Semyon Kuzmich! Finally, I was going to send you more documents that I found in the family archive in Tolyatti and which came from TsAMO (Central Archive of the Ministry of Defense). I traveled to TsAMO myself, some documents are repeated.

The list of casualties, soldiers who died in Tselina, I send separately in a letter. We undertook the compilation of the Book of Memory of victims of political repression. We worked in the archives, meet with people - the descendants of the repressed. You have to write and drive a lot. How is your health? May God give you strength and inspiration for your good and necessary work. Health and prosperity to you and your family, all Tselinka. I bow to you for the memory! ”

And here is the document itself, which came from the Chebarkulsky ethnographer and confirms that not all the graves of the soldiers who liberated our area from the occupants were killed and buried in our land, found. The names of these liberators are not listed on the memorial in the village of Celina. So, they can be those fighters who died and were buried near the railroad tracks on the outskirts of Celina in January 1943.

These are only assumptions. But what happened in reality. As Semyon Kuzmich himself says: “From 11 (according to TsAMO), the fighters who were killed and buried in Tselina - 4 were buried in a mass grave on the central estate of Tselinsky grain farm.”

According to eyewitnesses, Yulia Vasilyevna Popova, who at that time worked in the dining room of the grain farm, and Darya Naumovna Chebotareva, housewives with three children, the remaining seven of the eleven soldiers killed were most likely buried at the site of the death - behind the eastern railway crossing, just after a railway booth at the profiled road Salsk - Rostov (then the road to Rostov-on-Don went along a different route: through the first line of the Celina, next to the railway tracks).

Soviet soldiers were killed when they suppressed the fascist firing point installed on the elevator. And in the list of 11 dead most of the soldiers are not of Russian nationality.

This is also confirmed by eyewitnesses of the burial of the first four fighters: “Non-Russian Guys”.

The soldiers were dressed in felt boots and coats, one - in the tanker's helmet.

Many years later — in 2007 or 2008 — one old woman from the village of Celina recalled in the museum: “There, behind the railway booth, at the eastern crossing, along the road to Rostov, after the Germans were driven from the village, we saw several , Soviet, fighters ... How so, Semyon Kuzmich? Something must be done to restore the names of these soldiers, to find their graves. These people should not remain unknown ... "

All these facts confirm the memories of other eyewitnesses. The final point in all this can put only search work and excavation.

And now - the names of those who are now far off day - January 23 1943 of the year - freed Tselina from the fascists and laid down their heads.

So, the data of the Central Archive of the Ministry of Defense of the country, which was sent by S. B. Tonkosurova: “We inform you of the partially irretrievable loss of the 34 Guards Rifle Division, the burial of which was carried out at Tselina station in the Rostov region:

Among the irretrievable losses of the 34 Guards Rifle Division, a large number of military personnel, the fate of which could not be established due to the difficult situation, so they were taken into account without a trace. And the signature is A. Tikhonov, head of the 1 department. ”

We are in Yandex Zen
Myths of the Great Patriotic. Papier mache helmet
Non-classified materials - the truth is somewhere nearby (Part of 1)
4 comments
Information
Dear reader, to leave comments on the publication, you must to register.