22 September 2015
14
She was not even six years old when the first explosions thundered across the country. Daddy - so she called her father, went to the front. And mother stayed with four children. The younger, Vanechka, was still a baby. The Germans broke into Lopanka (Tselinsky District, Rostov Region), ravaged houses, mocked people. 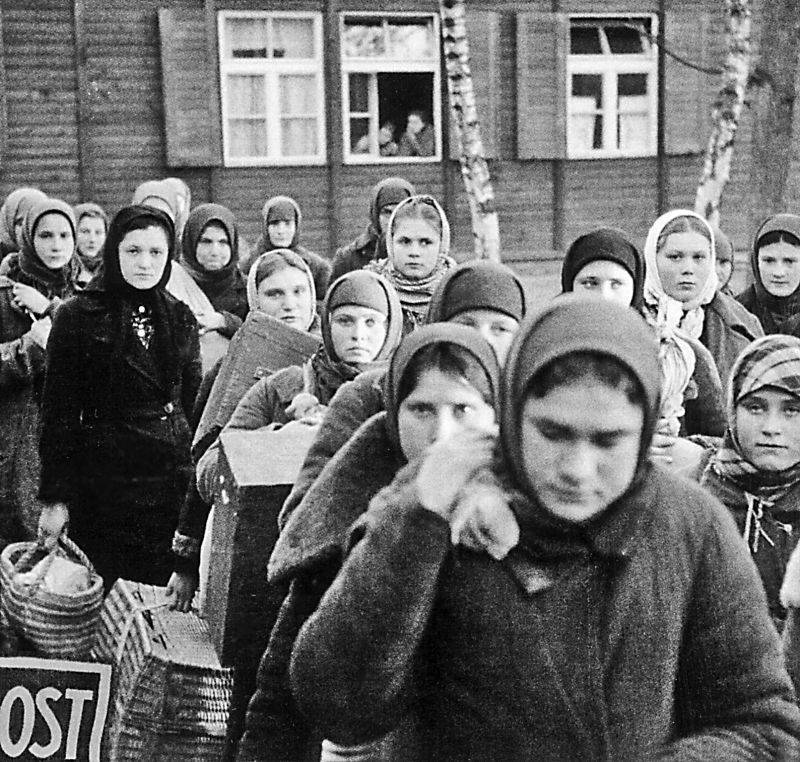 Every day they came to my great-grandmother's house, demanded food, scoffed. At that time, the children were hiding on the stove and quietly peeking out from behind the curtain with hungry eyes, watching merry, arrogant fascists tuck at both cheeks ... They cried sobbingly when they killed the cow (that's what grandma called her), because she was the last the wet-nurse.

“Mom will go to the field, pick up sticks - dry corn stalks, bring home, and we will take out the inside of the foamy one. He pauses in a cup, mixes it with water and makes tortillas, one tiny comes out to everyone - this is for the whole day!

And once a wounded soldier was asked to enter the house to be hidden as there was a chase. Mom buried him in a chest and covered him with a floorboard. The furious Germans came running after them, shouted something in their own language, and then grabbed Mom by the hair and dragged her into the snow, and then dragged us, the children, and little Vanya was thrown into the snow. They put mom in front of us on her knees and put a machine gun on her head. But then a German (probably the boss) drove up on the truck, shouted at his people, lifted his mother from her knees, gave her into the arms of the screaming son and led everyone into the house. And so they were saved. The war ended.

But the difficulties of the hungry post-war period were just beginning. Daddy did not return from the front. The train carrying soldiers was hit by a bombardment, few survived there ... The grave of my great-grandfather Peter is in Pyatigorsk.

In the last years of her life, my grandmother wanted very much to visit her father’s grave, but her health failed - she could not. Women whose families returned their husbands, it was easier. Hunting, fishing, they could feed their children. But widows had a very hard time. Grandmother recalled how a neighbor brought food to small fish, hungry. Brothers, Tolya and Vanya, at that time already swollen from hunger, eagerly grabbed the fish, which then could be seen through the thin skin of the swollen abdomen.

From the age of ten, my grandmother, frail as a reed, lived in barracks with the same girls and worked as a milkmaid on a farm. Milked by hand a few dozen cows. Fingers swelled to the night so that they could not even squeeze them into a fist, and very sick.

Often at night, falling asleep on two-tier, coarsely-made beds, she heard crying in pain. Crying little girls who have lost their childhood ...

My grandmother never said “bread” - only “bread”. All products called affectionately - patties, potatoes. So say only those who survived the famine, who know the real price of a crumb of bread, who mined it with sweat and blood.

On 9 May - Victory Day, the grandmother always went to the monument. I stood for a long time, wiping away tears, and stroked my native name on the obelisk. And we felt sorry for her, comforted and wept too. We want to bow at your feet, Soldiers, what an honor they stood for. Those souls did not lose souls to those mothers and children. Thank you, for everything, thank you you had a terrible fate to drink to the bottom. ”

She breastfed the baby and died

Every Soviet family participated in the Great Patriotic War. Some fought at the front, others worked in the rear, and still others tried to survive in the occupation. Everyone got their own "spoon of grief."

History each such family is a part of the history of our country and even of all mankind. I was looking for information about the family life of the parents of my second grandfather, Fedor Markovich Bozhinov in those terrible years. Their family lived in Vladikars, and although neither the grandfather nor his older brothers and sisters are already alive, family stories about those events, supplemented by the stories of their neighbor in those early years of Anna Nikolaevna Ischenko (then Bavina), that I want to share and with readers.

In June 1942, when the Nazi troops stormed Rostov-on-Don, aviation bombed not only the city itself and its environs, but also distant areas from the front.

A large silver plane was rapidly descending over the farm. The hum of the motor pressed on the ears, the children froze, seeing for the first time a steel bird. But as they approached, sparks appeared from the plane, and the whistle of bullets was heard. Somehow, suddenly, scared mothers appeared next to the children, they grabbed their children and ran off with shouts: “Hide, it's the Germans who are shooting!”.

Then came the Germans themselves. The first thing they did was shoot all the dogs. The barking mongrel now replaced the barking German cry, looking for partisans, looking for those who helped the Red Army, and those whose husbands were communists.

The men were all at the front, the old men, women and children remained at home. The fascists committed atrocities, raped young girls, shot all objectionable, and drove the young people to Germany. The mother of Anna Nikolaevna Evdokia Yakovlevna was very afraid for her eldest fourteen-year-old daughter Maria. She smeared her daughter's face with soot, put it on rags and said that she was a fool. However, for greater safety, all her four children were sitting on the stove.

The Germans ate in the occupied territories due to the robbery of local residents under the slogan “war feeds war”. So a terrible famine came to every house: they took everything away, dooming the children to starvation.

The confirmation was such a case. The soldiers shot a pig, and since there was severe frost and high drifts outside, they began to grind and carve the carcass right in the house of Evdokia Yakovlevna. All the children, along with their grandmother, frightened, sat on the stove. Fear and hunger drove crazy.

The younger Luba was then only two years old, the girl cried and asked for food.

A fascist who slaughtered a pig, with a bloodied knife attacked the child, he shouted in his German language so that she would stop talking. Another moment - and he would have killed the baby as well as the pig, but his accomplices hailed him.

They were very hungry, and they wanted to eat more than listen to screams that distract from the anticipation of food. The girl was very frightened, turned white and fell silent. For a long time she did not say anything at all and did not cry.

Despite the fact that death and fear paralyzed the will of adults, adolescents remained true to themselves. So, fifteen-year-old brother Nicholas once came home happy and joyful. He pulled colored wires out of his bosom and proudly showed them: “These are beautiful - red, white, yellow, blue! Beautiful beads for the girls will turn out! ”, To which the mother began to cry, because she understood where these wires came from - the boys deprived the Nazis of communication.

Selecting this "treasure", she left them in a burning stove, and then she charred the charred remains. The Germans were looking for the guilty, and the boys understood: this is how they can annoy the enemies.

All the farm children honestly cut the enemy connection in different places. Two guys, the Germans caught and shot. Kohl Bavin was caught with his friend Zhora Bogdanov and brought to the village of Tselina, here the fascists had a Russian tanker in captivity, and during interrogation he stood up for the guys, said: “The guerrillas cut the wires, the boys had nothing to do with it”.

The guys were released, but the problems with communication remained at the same level. The next one was caught by Vasily Bozhinov, my grandfather’s elder brother, and they were already shooting him, but the attack of our troops and the exploded artillery shell a hundred meters away from the procession led to the panic of the brave heroes of the Third Reich. Forgetting the boy, they rushed to escape in different directions, already saving their lives.

This is Pushkin's “Boys joyful people with skates sonorous ice cuts,” and these boys not only had no skates, did not have elementary shoes, they all went barefoot. But here rescued such a case. The Germans for some reason poured into a hole a large pile of their boots, and they also assigned a sentinel to them. Leather, they sparkled with steel horseshoes and literally attracted shod frozen feet.

And now Kolya and Zhora decided to take another risk, crept up from behind while the sentinel walked away due to need, and grabbed two boots and ran from there. The sentry put an automatic fire in their backs, but the guys had already managed to hide in the bushes of blackthorn.

Brought home boots happy and joyful. However, at home they saw why the Germans threw them away — there were boots on one foot. However, the trophy remained in the house and for several more years proudly ran around the whole family.

The Nazis retreated in January 1943: frost and snowdrifts, artillery bombed with solid fire, the whole farm was sitting in the trenches, waiting for the end of the shelling. Among others, there was a woman with an infant son in her arms. On the second day she decided to crawl home, manage the housework. People fled to the trenches who were what, and the animals stayed at home. When she was crawling back, a shell exploded next to her, which tore off her leg. Pain, bleeding, but she still climbed into the trench. Bleeding profusely, she breastfed the baby and died. Her baby boy Volodya Zhukov remained to live, but without his mother.

Once again, these childhood memories prove that children are always just children, not realizing the danger they sometimes put not only themselves, but also others, keeping in their hearts a place for deed and courage. But what it was like for women, their mothers, who, despite the terrible ordeals of fate, were able to save their children, to preserve the Russian gene pool of sincerity, friendship, love, faith and hope in everything that is bright and good!

Ctrl Enter
Noticed oshЫbku Highlight text and press. Ctrl + Enter
We are
"They brazenly warm up, robbed, and then begged"Father told
Military Reviewin Yandex News
Military Reviewin Google News
14 comments
Information
Dear reader, to leave comments on the publication, you must sign in.