23 September 2015
8
One of the main components of a victory in an air battle using missiles is the timely detection of the enemy and the subsequent launch of missiles. Thus, the fighter’s arsenal should include several types of air-to-air guided missiles capable of attacking a target in different ranges of range. In the near future, the range of weapons of the Russian Air Force combat units should be replenished with a new medium-range missile RVV-SD, which will allow you to attack targets from a distance of more than 100 km.


The guided missile RVV-SD (“medium-range air-to-air missile”) or “Product 170-1” was developed by Tactical Missile Weapons Corporation (KTRV), namely, Vympel GosMDB I.I. Toropova, included in its composition. The new rocket is a further development of the P-77 product (RVV-AE) and is designed to destroy various types of air targets at any time of the day and at any angle, including against the surface. The project implemented the principle of "launched-forgotten", facilitating the combat work of a fighter pilot. The carriers of the RVV-SD missile should be existing and prospective domestic fighters.

The development of the project “Product 170-1” was launched in 2003 on the instructions of the Ministry of Defense. By the end of 2005, the Vympel GosMCB completed the main design work and produced prototypes of rockets intended for the first test launches. In the 2006 year, it was planned to begin joint state tests, however, this phase of the project was delayed for several years due to some problems with the aircraft carriers. According to some reports, the developers of the rocket project had to wait for the creators of one of the promising fighters to complete their work. Because of this, the final stages of the project have been shifted by several years. 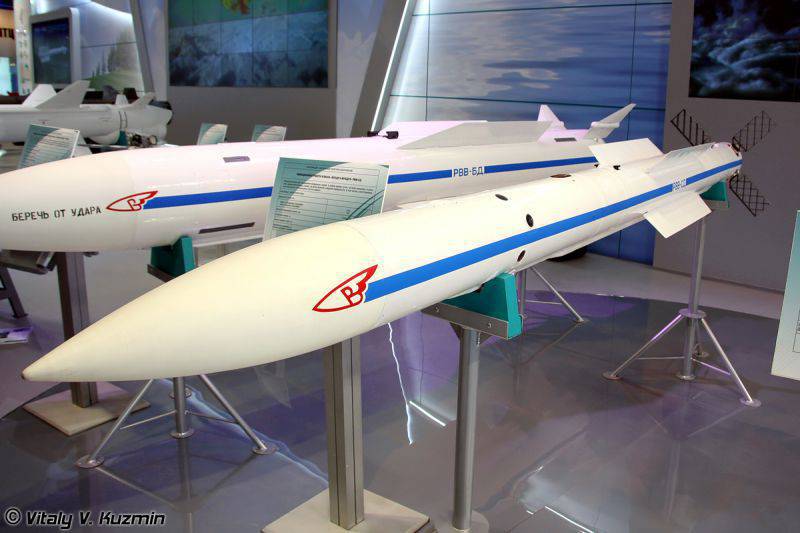 The RVV-SD rocket is a further development of the existing P-77 / RVV-AE, which accounts for their external similarity and the application of some general ideas. Thus, in the new project, the overall design and layout of the internal hull units was retained. In this new product is equipped with modern electronic equipment, built on the basis of new ideas and components. It was through the use of new components, components and assemblies that it was proposed to provide higher performance in comparison with weapons base model.

"Product 170-1" has a cylindrical body of large elongation with a conical head fairing. The total length of the rocket is 3,71 m, case diameter is 20 cm. Trapezoidal X-shaped wings are attached in the middle of the case with a span of 0,42 m. On the bottom surface of the case there is a slight thickening. The rest of the rocket body is refined from the point of view of aerodynamics and does not have any large protruding parts. Rocket launch weight - no more than 0,68 kg.

In the head part of the body is placed the homing head and the autopilot equipment. Behind them, a proximity sensor with a fuse and a warhead are mounted. The tail part of the body is given under a relatively powerful and large solid-fuel engine. Also located in the tail drives lattice steering wheels.

The RVV-SD missile is equipped with a combined guidance system that provides access to the target area where the target is located, with its subsequent detection and destruction. For the flight to the specified meeting area, an inertial navigation system is used for the purpose. After reaching the given point, the rocket begins searching for a target using an active radar homing head such as 9B-1103М. This product was developed in the Scientific Research Institute "Agat" and is a monopulse Doppler system. The first version of this GOS was developed in the mid-nineties and first introduced in 1998. In the future, the 9B-1103М product underwent several upgrades, becoming the “progenitor” of a whole family of guidance systems. As part of the new rocket used one of the latest versions of the GOS. 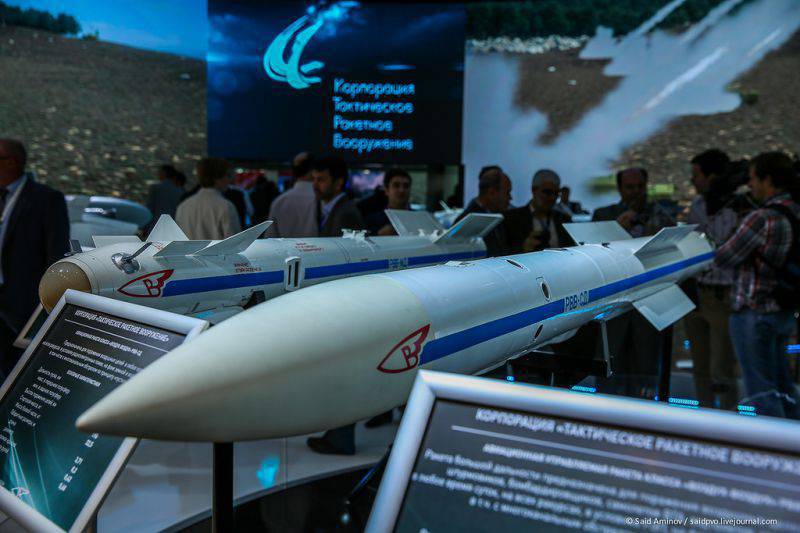 The homing head 9B-1103М differs from the previous products of its class by increased characteristics achieved by increasing the transmitter power and receiver sensitivity, new software and increasing the resistance to interference. In practice, all these innovations resulted in an increase in the maximum launch range and an increase in the maximum target overload. A rocket with a similar homing head independently detects targets, thereby realizing the principle of “launched-forgotten”. After launching the rocket, the carrier aircraft should not illuminate the target with a radar beam or otherwise provide guidance of the rocket.

In 2014, the Agat Research Institute presented two new versions of the GOS 9B-1103M, proposed for installation on various air-to-air missiles, including the RVV-SD. The 9B-1103M-200PA head receives an additional semi-active channel, and the 9B-1103М-200PS product has a passive channel that complements the main active one. Modified GOS allow you to expand the capabilities of promising missiles through the use of different methods of finding targets. However, as far as is known, the 170-1 missiles should not yet receive new homing heads.

Control during the flight is carried out with the help of two pairs of lattice controls installed in the tail section of the hull. An interesting feature of the RVV-SD project was the change in the design of these units. The rudders of the new rocket received updated mounts, racks and drives. Due to such innovations, the range of the rudders, in comparison with the base rocket P-77, was reduced by 7, see. In addition, it was possible to improve the aerodynamic characteristics to a certain extent.

In the middle part of the RVV-SD rocket there is a core multi-cumulative warhead. The total weight of the warhead is 22,5 kg. Undermining the warhead is made with the help of a fuse connected with a proximity sensor target. This device is located behind the control automation. Its location can be determined by a set of transparent round windows on the side surface of the case. Behind this glazing are installed elements of the laser sensor target. 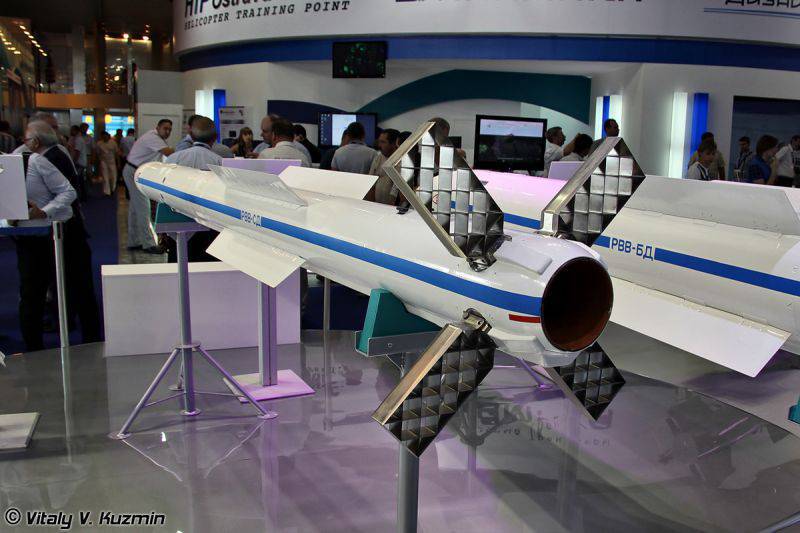 A single-mode solid-fuel engine is placed in the tail section of the hull, providing a rocket to a range of up to 110 km. The cruising flight speed with the engine running reaches 4000-4500 km / h. It should be noted that at such speeds even minor modifications of the rudder design should seriously improve the overall characteristics of the rocket.

The guided missile RVV-SD is capable of destroying targets at altitudes from 20 m to 25 km. The maximum range of start-up brought to 110 km. Most of this distance rocket flies with the help of an inertial navigation system. At the final segment, at a given point, an active radar homing head is switched on. The target acquisition range and the length of the final flight segment under the control of the GOS depends on a number of parameters, primarily on the visibility of the target. Thus, an enemy aircraft with an EPR at the level of 3 sq. M is detected from a distance of about 20 km. Direct targeting is performed using the GOS.

According to reports, the “170-1” can hit air targets flying at speeds up to 1500 m / s. The maximum target overload, at which the rocket keeps pointing and continues the attack, reaches 12 units. Due to the design refinement, it was possible to bring the available rocket overload to 40 units. Thanks to this, RVV-SD can turn at speeds up to 150 ° per second.

To use the new guided missile as part of the fighter armament complex, it is proposed aviation ejection device AKU-170E. As part of this system, piston-type mechanics with a pyrohydraulic drive are used. The source of energy for rocket discharge in this case is the EPK-28T-2 pyro cartridge. The proposed ejection device has a number of important features that facilitate the operation of missiles. For example, the equipment of the AKU-170E system is capable of holding the rocket in its original position until it is separated from the carrier, preventing it from turning in roll and course. In addition, it is allowed to transport missiles for 30 days without removal and additional checks. 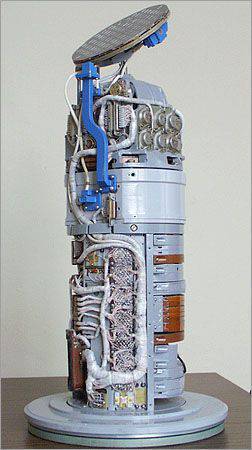 For deliveries to foreign customers, the Vympel GosMCB has developed a set of tools for the adaptation of missiles and ejection devices, allowing them to be used on foreign-made aircraft.

The carriers of missiles RVV-SD can be domestic aircraft of various types. Nevertheless, according to available data, the development of the project was carried out taking into account the armament of multi-purpose fighters Su-35С. According to some sources, state joint testing of the new weapon was delayed precisely because of certain problems with this aircraft. Thus, the development of missiles was suspended until the advent of a full-fledged aviation complex, which was to be its carrier.

By the end of 2010, the Su-35C fighter was ready for weapon tests. In addition, by this time finished finishing the new rocket. Later, several test launches of RVV-SD missiles from the new aircraft were conducted. A number of test launches confirmed both the possibility of using the 170-1 missiles on the new aircraft technology and the high characteristics of these weapons.

To date, Tactical Missile Weapons Corporation has completed all work on the RVV-SD project and brought the new missile to mass production. Upon receipt of the relevant order, KTRV is ready to begin full-scale mass production of such weapons and deliver them to the troops. Not so long ago, the first information appeared about a possible contract for the supply of new missiles.

26 August 2015, the Russian Ministry of Defense opened a tender for the supply of "170-1 Products". In accordance with the terms of the closed tender, the submission of applications will end on September 28. The auction itself with the definition of the winner to be held October 9. Shortly thereafter, a contract for the supply of serial weapons will be signed. The customer, represented by the military department, intends to order a certain number of missiles RVV-SD for a total amount of no more than 13 175 178 880 rubles 15 kopecks. At the same time, the total number of products planned for the order is still non-public information. 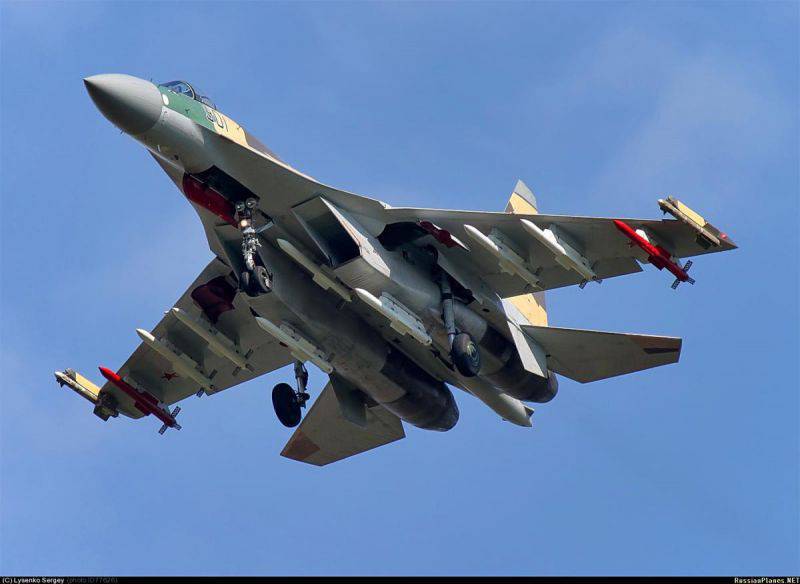 The number of missiles to be delivered based on the results of the current competition, as well as the cost of a single product remain unknown. Probably, this information is still a state secret and is not subject to disclosure. However, even without this information, the new tender is of great interest. Its appearance speaks of the imminent start of full-scale mass production and the supply of missiles RVV-SD to combat units of the Russian Air Force. Thus, the project reached a logical end, and the rocket itself will “reach” the armed forces in the near future.

According to a number of sources, the “Product 170-1” is no longer the last domestic medium-range air-to-air missile. Currently, KTRV specialists are working on a project with the code designation “180”. It is known that the "Product 180" will be equipped with a new guidance system and some other units, as well as receive a plane of the updated design. Prospective rocket is being developed for the fifth generation fighter T-50 (PAK FA), which imposes some specific design requirements. "The product 180" is planned to be transported on the inner suspension and run from the built-in cargo compartments, because of which it must have the smallest possible dimensions.

The newest missile RVV-SD passed all the necessary tests and will be ordered by the Ministry of Defense in the near future. In addition, a new product of a similar purpose is being created at its base. Thus, over the next few months, Russian military aviation will receive new missiles with enhanced characteristics, and in the future the arsenals of the Air Force will be replenished with another type of guided weaponry to fight enemy aircraft.