Upgraded equipment for the Ukrainian army 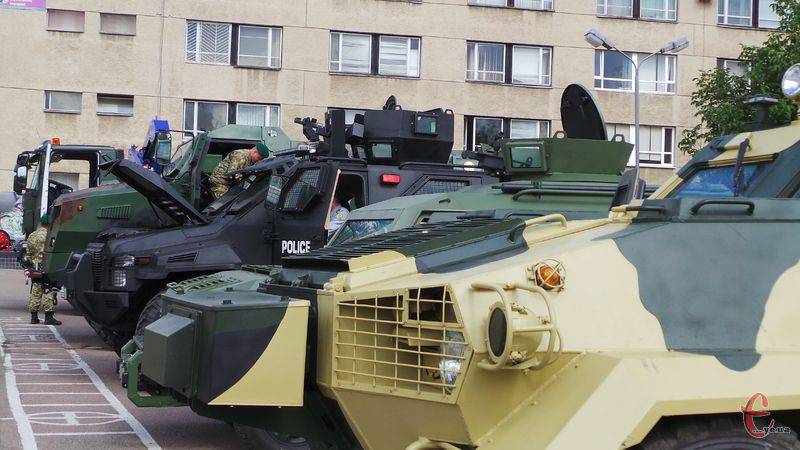 9 September 2015 was a meeting of commanders and technical specialists of the State Border Service held at the National Academy of State Border Service of Ukraine named after Bogdan Khmelnitsky. Within the framework of this event, new models of KrAZ armored vehicles were presented. Border guards familiarized themselves with modernized models of KrAZ Cougar, KrAZ Spartan and KrAZ Shrek cars. 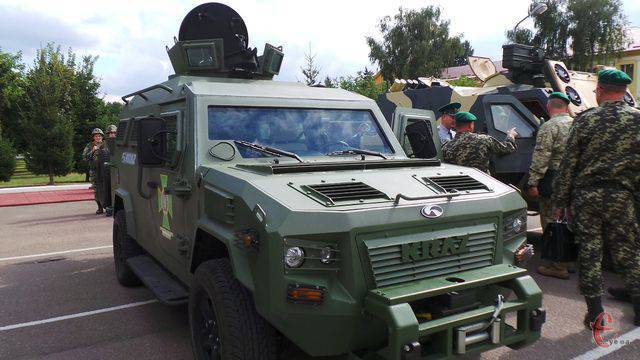 The Ukrainian armored vehicle KrAZ Cougar is manufactured at the Kremenchug Automobile Plant under license from the United Canadian Emirates company Streit Group. The main purpose of the car - fighting in the conditions of the city and conducting police operations. The first sample of this car was introduced in February 2013.

The KrAZ Cougar armored car was designed on the Toyota Land Cruiser chassis; it has a traditional layout: the engine is located in the front, the control compartment is in the middle, and the troop compartment is in the rear part of the vehicle. The crew is two people, it is possible to transport several infantrymen.

The body of the armored vehicle is welded, made of armored steel sheets, which are located at a certain angle. The reservation was made according to the CEN Level BR6 standard, which ensures circular protection against bullets of a caliber 7,62 of millimeter from a distance of 10 meters.

The Cougar armored car can be equipped with several types of six-cylinder in-line engines: petrol Toyota 1FZ-FE 4,5і and Toyota 1GR-FE 4,0і with 218 and 228 horsepower, respectively, and diesel Toyota 4,0 TD with 240 horsepower. Installed on the car five-speed gearbox. The volume of each of the two tanks is 90 liters.

The weight of the machine is 4,2 tons, length - 5,3 meters, height - 2,1 meters, width - about 2 meters. Armored Cougar can reach a maximum speed of 105 kilometers per hour. Tires are provided with bullet-proof inserts "Hutchinson runflat system".

The installation of machine guns of 7,62 and 12,7 calibers of millimeters, as well as an 40-millimeter automatic grenade launcher, as well as various combat modules are provided on the roof of the fighting compartment.

In the troop compartment, in the upper part of the sides, there are three embrasures on each side, intended for the introduction of fire from small weapons. Doors for landing and landing are located in the aft compartment.

In addition, an additional equipment is installed on the armored car (or can be installed), including a radio station, a winch designed to pull the vehicle out, or to pull out other vehicles of similar or lower weight, as well as a spare wheel located on the doors of the troop compartment in aft of the machine. In addition, it is possible to install a video surveillance system.

The second type of equipment presented to the border guards is the Ukrainian armored vehicle KrAZ Spartan. This machine is also manufactured at the Kremenchug Automobile Plant under license from the same Canadian company Streit Group. The first demo was presented in 2012 year. 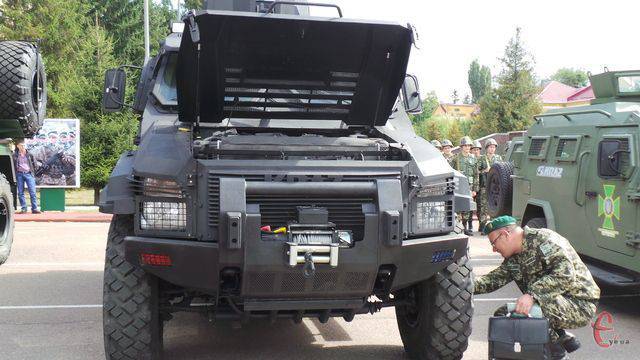 The KrAZ Spartan armored car was developed on the basis of the Ford F550 chassis, it has a standard layout with front engine placement, aft accommodation of the troop compartment and control compartment in the middle part of the vehicle. The crew of the car is two people, as well as in KrAZ Kuguar, provides for the transportation of several infantrymen.

The body of the car is welded, armored steel sheets are angled. The reservation provides all-round protection against bullets of caliber 7,62 millimeter from a distance of 10 meters.

The car is equipped with a Ford 6,7 TD V8 engine with horsepower 400. Tires have bullet-proof inserts "Hutchinson runflat system".

A six-speed gearbox is installed on KrAZ Spartan. Tank capacity is 257 liters. Armored vehicles can reach a maximum speed of 110 kilometers per hour.

Like the KrAZ Cougar car, various combat modules can be installed on the roof of the fighting compartment, in particular, 7,62 and 12,7 millimeters machine guns, as well as an automatic 40 caliber mm grenade launcher. On the sides of the troop compartment there are also three embrasures on each side for firing from small arms. 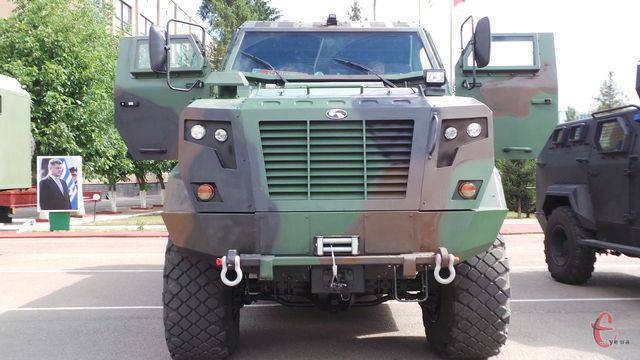 And, finally, the third model of military equipment for the army is the KrAZ Shrek, an Ukrainian-made armored vehicle that was developed jointly with Canadians based on the KrAZ-5233BE vehicle. The car was created according to the MRAP standards in 2014, and by its characteristics it is significantly superior to KrAZ Cougar and KrAZ Spartan. The cost of one such car is 1 million dollars.

This car has a V-shaped bottom. There are ballistic protection (B6 + / STANAG 4569 of the second level) and mine protection - one mine TM-57 (7 kilograms of trotyl) under the bottom and two mines TM-57 (14 kilograms of trotyl) under the wheels. The car is equipped with an engine YMZ-238D, it is possible to install Deutz and Cummins engines. The gearbox is a nine-speed Fast Gear 9JS150TA-B.

The weight of the car reaches 16 tons, length varies from 7,7 to 7,9 meters, width - 2,5 meters, height - 3 meters. Transparent laminated glass bulletproof. The inner layer is made of polycarbonate.

Several modifications are used in the armed forces: KrAZ Shrek One TC, which is designed for the operational transportation of personnel of units and the provision of fire support, and can also be used as a carrier of various weapons and military equipment;

KrAZ Shrek One Ambulance - ambulance with mine protection, which is equipped with medical equipment and is designed to provide first aid to victims and their further transportation;

KrAZ Shrek One RCV is a multifunctional vehicle equipped with mine protection, which is designed to work in hazardous areas. The vehicle has a crane with special equipment and a remote control from the cab.

Despite the fact that all this equipment is widely used in the conflict zone in the east of Ukraine, the need for its modernization was obvious, since there were many flaws. So, in particular, the chassis could not withstand the loads, breaking off the shock absorber brackets, there was no space for the spare wheel, the need for fuel that would meet the technical characteristics of new generation engines. While driving over rough terrain, strong blows were felt to the steering column. And most importantly - the armored glass did not always withstand the second hit, the armor in the front of the car was too weak, so when hit by fragments of the shells of the machine failed. Not all windows had security bars. While the car was moving, it was impossible to hit the target, because the cars were very shaky. In addition, the protection of the machine gunner was quite weak, the protective walls needed to be raised higher.

At the same time, despite all these shortcomings, armored cars have already managed to prove their effectiveness. They perform various kinds of combat missions. In some cases, these vehicles are used as armored personnel carriers on the front lines. But perhaps the most important thing is that they protect the life of the fighters. Moreover, for the entire period of use, not a single case of crew death was recorded.

The presentation of armored vehicles was carried out in order to familiarize the border guards with the technical capabilities and design of vehicles, as well as with those modifications that were made on the basis of comments and proposals of the Ukrainian military.

Military experts praised the modernized technology, in particular, the expansion of the chassis, the use of larger rubber, split windshield. All these and other improvements, in their opinion, will significantly improve the tactical and technical characteristics and maneuverability of the machines.

Of course, the new equipment should be put into service, the military should know all the features of its use, but I really want this technology not to be used for its intended purpose, so that the conflict will finally be resolved and there will simply be no need to use it.

We are in Yandex Zen
New armored cars from Streit Group and KrAZ
On the "new Ukrainian" weapons received by equipping the Armed Forces of Ukraine
26 comments
Information
Dear reader, to leave comments on the publication, you must to register.