22 September 2015
14
To effectively solve the problem of gaining air superiority or protecting airspace, fighter aircraft must have a fairly wide range of guided missile weapons. With the help of guided missiles of several types with different characteristics, it is possible to ensure the destruction of targets in a wide range of ranges and thereby create a kind of echelon interception system. At the same time, both long-range missiles and close-range weapons are of great importance. One of the latest domestic developments in the field aviation short-range air-to-air missiles is the RVV-MD missile.


The RVV-MD project (“Short-range air-to-air missile”) was created at the Vympel GosMKB. I.I. Toropov. This organization is also responsible for the production of new missiles. The RVV-MD product is not a fully new development and is another development variant of the rather old P-73 guided missile. Nevertheless, due to the use of new equipment, it was possible to significantly improve the characteristics of the rocket and its overall combat effectiveness. In addition, the new project took into account the use of missiles by modern aircraft.

According to some sources, the creation of the RVV-MD rocket started in the late nineties, and then the promising product was designated as P-73M. The new name RVV-MD for the first time appeared in the Vimpel GosMKB documents in 2007. Two years later, for the specialists and the public for the first time showed the layout of the new rocket. It was demonstrated at the company's booth in one of the pavilions of the MAKS-2009 exhibition. In the future, RVV-MD mock-ups repeatedly replenished the exposition of the stands of GosMCB Vympel and Tactical Missile Weapons Corporation (KTRV), which now includes the design bureau. 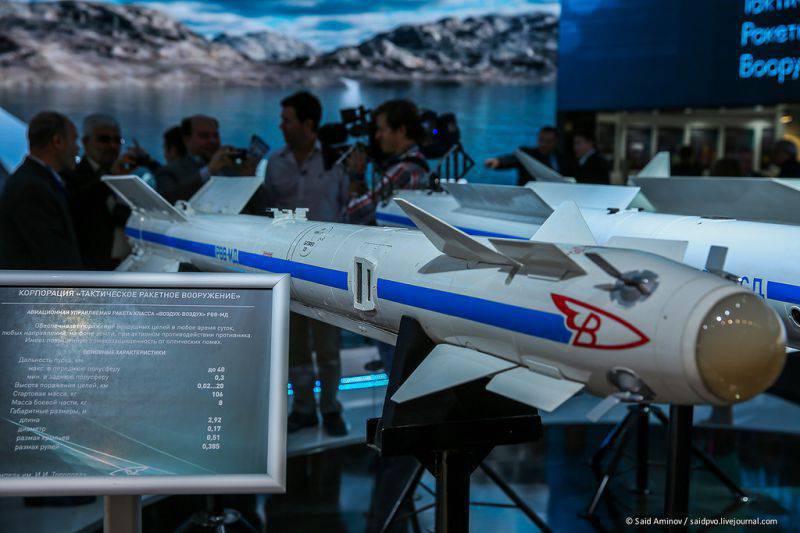 Being a further development of the existing rocket, the RVV-MD product is intended for solving the same tasks as its predecessor. The new short-range missile is designed to attack air targets in various conditions, including during the near-high-maneuverable combat. The rocket provides for the defeat of various types of air targets at any time of the day and in any direction relative to the aircraft carrier. Also, according to the developer, there is the possibility of attacking targets against the background of the earth and protection against enemy countermeasures.

During the creation of the new rocket, it was decided to leave unchanged the overall layout of the base P-73. Nevertheless, the design of the new RVV-MD provides some original innovations aimed at improving performance.

The overall appearance and layout of the RVV-MD rocket does not differ from the base P-73. It has a cylindrical body with a total length of 2,92 m and a diameter of 0,17 m. The head part of the body is made in the form of a conical part with a transparent hemispherical fairing. On the outer surface of the case there are four groups of X-shaped planes. Immediately behind the head fairing there are four sensors of aerodynamic angles, with the help of which the automatics monitors the flight parameters of the rocket. Behind them is a group of trapezoidal destabilizers, behind which are swept all-turning aerodynamic rudders with a span of 38,5 cm. Trapezoidal wings with ailerons are established in the tail section of the hull. The launch weight of the rocket is 0,51 kg.

According to reports, the layout of the missile RVV-MD corresponds to the layout of the base P-73. The rocket body is divided into five compartments in which this or that equipment is placed. The head compartment accommodates the homing head and part of the control system units. In the second compartment are autopilot, steering cars and a fuse. The third compartment is occupied by a gas generator, the fourth - the warhead. The tail fifth compartment is allocated to a solid-fuel engine and aileron drives.

The RVV-MD rocket is equipped with a passive infrared homing head. To improve combat performance and ensure resistance to countermeasures, a dual-band homing is used. As with some previous versions of the P-73 rocket, a cooled photodetector is used. The homing head is capable of detecting targets that are in a sector of width 120 °. In this case, the coordinator of the GOS may deviate by 75 ° from the neutral position.

The homing head and autopilot jointly develop commands for a set of controls. In order to ensure the highest possible maneuverability, the RVV-MD rocket has nasal rudders and tail ailerons. In addition, gas-dynamic rudders are used to adjust the flight path by changing the engine thrust parameters. 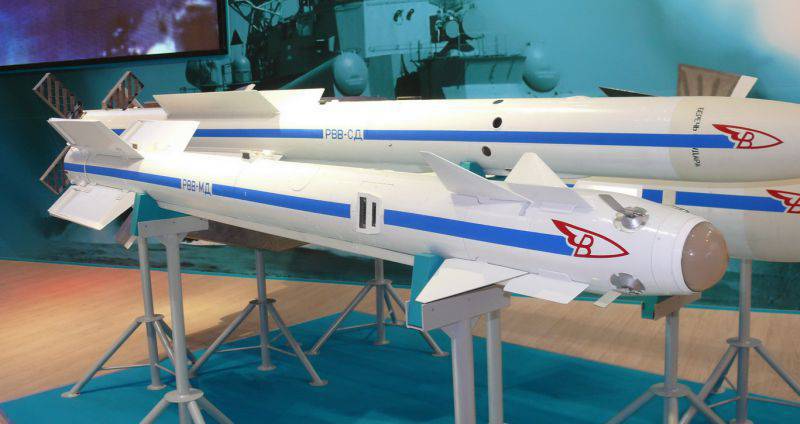 General view of the rocket. The nasal planes and the laser fuse window are clearly visible. Photo Bastion-karpenko.narod.ru

The target is hit with a rod warhead weighing 8 kg, placed in the central part of the rocket. According to some reports, to increase the destructive ability, the warhead rods are made of depleted uranium. The undermining of the warhead is made using two types of fuses. For this, a non-contact radar system or an optical laser fuse can be used. Some sources mention that a laser fuse missile is referred to as RVV-MDL. The rocket with a laser fuse can be distinguished by the characteristic windows on the side surface of the second compartment, through which the distance to the target is measured.

In the tail of the rocket is a single-mode solid fuel engine, equipped with additional gas-dynamic steering wheels.

New missile RVV-MD can be used to attack targets in the front and rear hemisphere of the carrier. The maximum flight range depends on a number of parameters, primarily the relative position of the target and the rocket. Thus, a successful launch of a missile at a target on a collision course is ensured at distances around 300 m. When fired at the same time, a missile can hit the target at a distance of up to 40 km. Shooting into the rear hemisphere of the carrier also leads to a reduction in the maximum range of flight: due to the need to turn towards the target, the range of the rocket decreases to 12 km.

The guided missile RVV-MD is capable of hitting targets at altitudes from 20 m to 20 km. It is possible to attack targets flying at speeds up to 2500 m / s. The defeat of aircraft performing a maneuver with an overload of up to 12 units is also provided. The probability of hitting a target with one missile exceeds 0,6.

The RVV-MD product, like its predecessors, can be used by various types of aircraft. Carrier of this weapons There may be various fighters, attack aircraft and combat helicopters of domestic development. For suspension and use of this type of rocket, the aircraft must be equipped with a P-72-1D or P-72-1BDXNNXX rail launcher. Thus, the carrier of the RVV-MD rocket can be all tactical aircraft and helicopters of certain types available in the Russian Air Force. Launchers of these types are used for suspension and transportation of the rocket, power supply during the flight and emergency reset.

Taking into account the possibility of the appearance of foreign orders in the Vympel GosMCB, a special technology was developed that allows the use of RVV-MD missiles on foreign-made aircraft. Details of this adaptation are unknown. Probably, it concerns the revision of suspension systems and connectors that provide interaction between the rocket and the onboard equipment of the carrier. According to reports, missiles of the P-73 family are already used in the armament of some foreign aircraft. 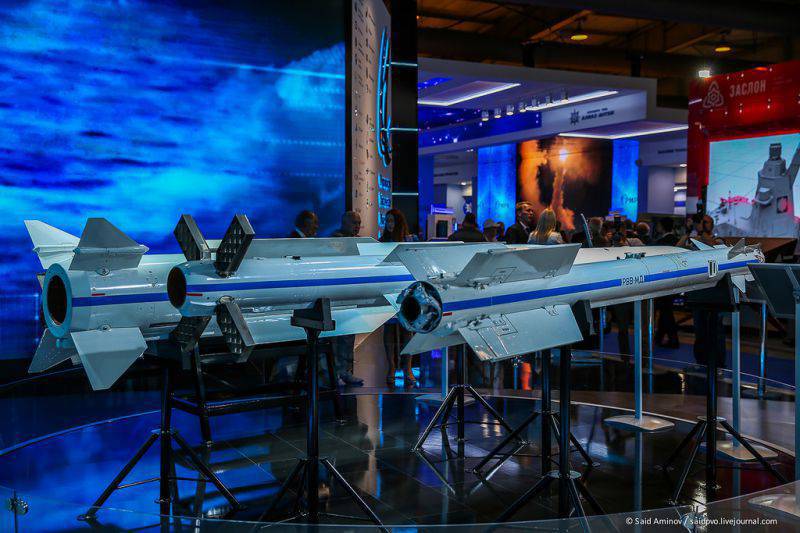 At the end of 2012, domestic media reported the start of testing of a new RVV-MD rocket. It was claimed that the KTRV specialists began to check the various systems of the new product and in the next few months should complete all the necessary work. In addition, it was reported that with the successful completion of the tests, the new rocket will go into series until the end of 2013. Nevertheless, as it became known later, the timing of the start of mass production of promising missiles changed markedly.

For several years, full information on the progress of the RVV-MD project has not been received. Only at the end of August 2015, the leadership of the Corporation Tactical Missile Weapons reported on the current state of affairs. The head of KTRV, Boris Obnosov, at the MAKS-2015 exhibition, said that by the end of this year, the corporation intends to start mass production of two new short-range and long-range aircraft missiles. Apparently, in the case of a short-range missile, it was specifically RVV-MD that could have gone into a series back in the 2013 year. Apparently, for some unnamed reasons, the work under the new project was delayed, and the timing of the start of production was adjusted.

The exact dates for the start of production and supply of mass-produced missiles, as well as order volumes and the cost of products, were not published for obvious reasons. So far, only the approximate time of the release of the first batch of serial missiles is known. The remaining features of production and supply remain classified. However, without this information the latest news look very optimistic. After several years of waiting, the Russian Air Force will receive new short-range air-to-air missiles, which, as follows from public information, will be able to significantly increase the potential of aircraft in close combat.

Ctrl Enter
Noticed a mistake Highlight text and press. Ctrl + Enter
We are
Long-range air-to-air missile RVV-BDAir-to-air missile of medium range RVV-SD
14 comments
Information
Dear reader, to leave comments on the publication, you must to register.