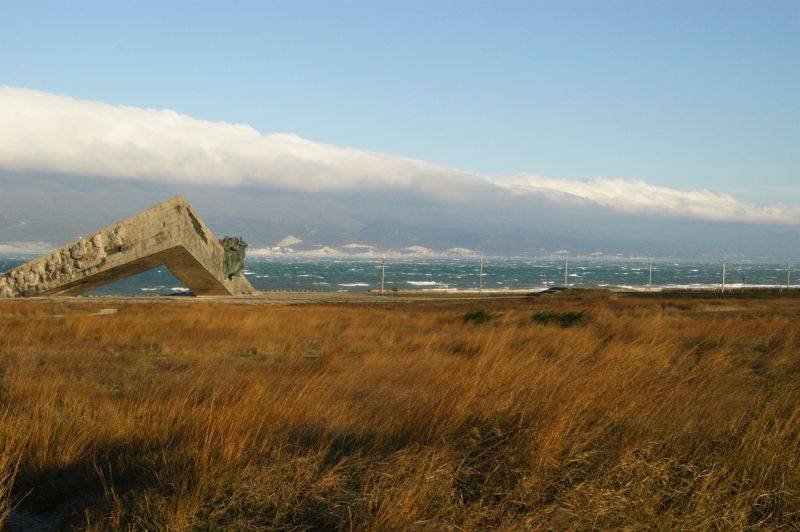 By tradition, I’ll start by reviewing the comments for the first part. Thanks in advance to my readers who supported the material. Also I thank those who left ambiguous comments or completely negative ones. They are the most significant ones to describe the fruits of the activities of certain circles in discrediting the church. Especially since almost all such attacks are historically untenable.

Myth number XXUMX. Betrayal of the ROC pastors during the Great Patriotic War

The funniest thing is that this historical the horror story is exaggerated in a specific part of our media along with the network cry "Stalin ate children." Moreover, the citizen, who posted this horror story, decided for convincing reasons to back up this nonsense with photos that contradict him. Because the figures depict the figures (attention!) Of the Ukrainian Greek Catholic Church, which has nothing to do with the Russian Orthodox Church. The Uniates were on the side of the Nazis and even helped in the formation of punitive battalions. 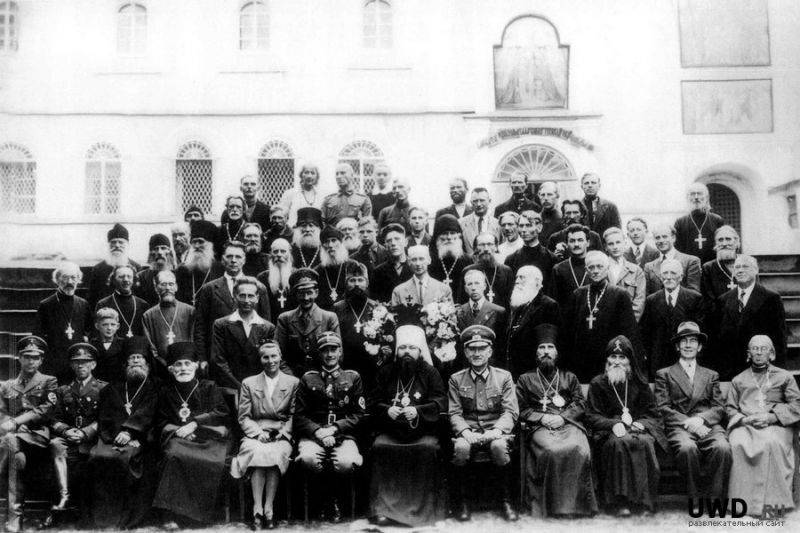 Photos of Uniates and Nazi invaders

Does this mean that there were no traitors among the priests of the Russian Orthodox Church? No, it does not. This indicates a rather deep penetration of views lobbied by the opposition, based on historical hoaxes and using total illiteracy and high self-esteem of the philistine in historical and religious matters.

About the traitors among the ranks of the ROC for the first time spoke (again attention!) Patriarchal Locum tenens Sergius back in the year 1941:
“There are rumors that I don’t want to believe that there are faces among our Orthodox pastors who are ready to go into service to the enemies of our Motherland and the Church — instead of a holy cross dawn on a pagan swastika. I do not want to believe this, but if, in spite of everything, such shepherds were found, I will remind them that, besides the word of exhortation, the Holy One of our Church was given by the Lord and a spiritual sword punishing those who violate the oath. In the name of this God-given authority, I, as a bishop who has the power to knit and decide, call for repentance of all who have been shaken because of fear, or for other reasons, and those who do not want to repent, declare forbidden to the clergy to the court ... ”

This is a twist, as they say. Thus, the official position of the ROC is crystal clear, and, therefore, negates all attempts to attribute the ROC connection with the Nazis, as any pastors who entered into allied relations with the invaders, automatically went beyond the Church and no longer had anything to do with Orthodoxy . And, if you do not shout "Vlasov" at the mention of the Red Army, but proudly say "Great Victory", then also be consistent at the mention of the Russian Orthodox Church.

Myth number XXUMX. Orthodoxy and the Church are different things

In fact, this illiterate and tenacious nonsense is nothing but tracing from the well-known market-network delusions that “the people won the war, not Zhukov” (read Stalin, Malinovsky, Chuikov, etc.). I do not argue, it sounds elegant, flirting with the vanity of the average man in the street. Of course, such subtleties as the organization of defense, support services, organization of the rear, communications, front control, etc., of the last few things of this nonsense are not at all interesting. They need slogans, short and extremely stupid, digestible for the crowd. Of course, if you are so finely organized that you take it on faith that the crowd of areal racers can fight corruption, the cook can rule the state, and the Orthodox faith live without theologians and pastors, then I will not take your time. But if the world of life slightly obscended your children's illusions, then you understand that the crowd is inert, and the average person is busy with work, home, shopping, and other things. And without a strong leader, an organizer, a carrier of an idea and a symbol, no movement lives.

Myth number XXUMX. The law on the protection of the feelings of believers violates the rights of atheists

First, modern atheism takes on some kind of militant forms that will not add security to the already complex religious and ethnic picture of modern times. In addition, the frenzy with which modern network atheists prove to God that it is not there is frightening by its downright religious fanaticism. And any fanatic, whether he is an atheist, a Christian or a Muslim, a priori suffers from educational nihilism, if not terribly shallow, both in historical and in purely social matters.

But let us omit this lyrical digression and return to our sheep. So, the law, in fact, is aimed at regulating relations in society. And first of all, oddly enough, it protects atheists, for it controls the actions of believers in the event of harm. In case the state withdraws, someone will take power into their own hands. And to explain that a more cruel judgment than a judgment on the basis of religious or national feelings, mankind did not know yet, it was not worth it.

From myths - to business

In fact, these are just trivia games. Small steps on the road to the Maidan and mutual hatred. But the action on Lakhtinskaya - their life in action. But Lakhtinskaya wore a packaging, so to speak, avant-garde character. Much more frightening metastases, populists fired in the province.

At the end of last week, work began on the construction of the Naval Nikolsky Cathedral in Novorossiysk, at which they also plan to open a seminary. It seems to be not a nightclub building and not a nuclear power plant, and even more so not a nuclear test site. But the church suddenly faced resistance from the local population. At least, so pompously told about this “Our newspaper. Novorossiysk ":" Citizens against ". Personally, the author of this material didn’t see these citizens in his eyes, since the newspaper itself only provides information about a certain “petition” that was signed by the 1300 man.

What angered the "citizens"? The construction site, for the construction site allegedly invades the territory of the memorial complex "Little Earth" and insults their patriotic feelings. Since your humble servant is not a staff correspondent of such a respected publication, he is forced to confirm every word with facts. 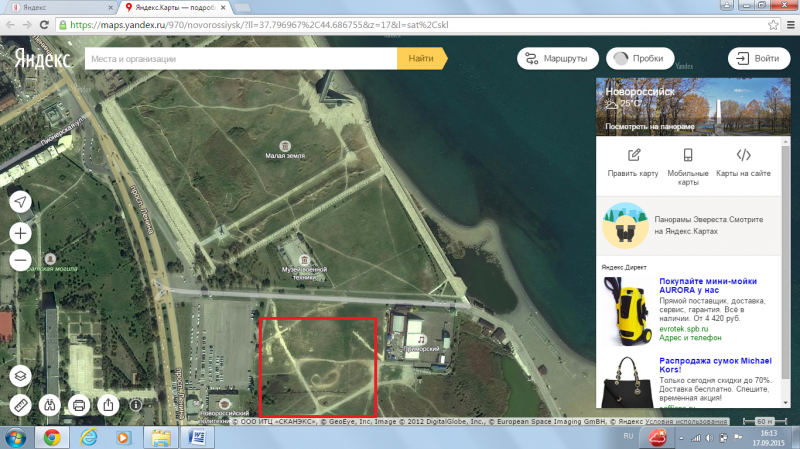 This screenshot shows the territory on which construction work is carried out, as well as the territory of the memorial complex "Malaya Zemlya" and the museum of military equipment. Do not medieval prejudices obscure my eyes? For some reason I do not see the violation of the borders of the memorial complex, because The construction site and the memorial area are divided by a road, the only access road to the beach (naturally being a fire entrance), on which stalls, several cafes, a dolphinarium, and a rescue station are located. 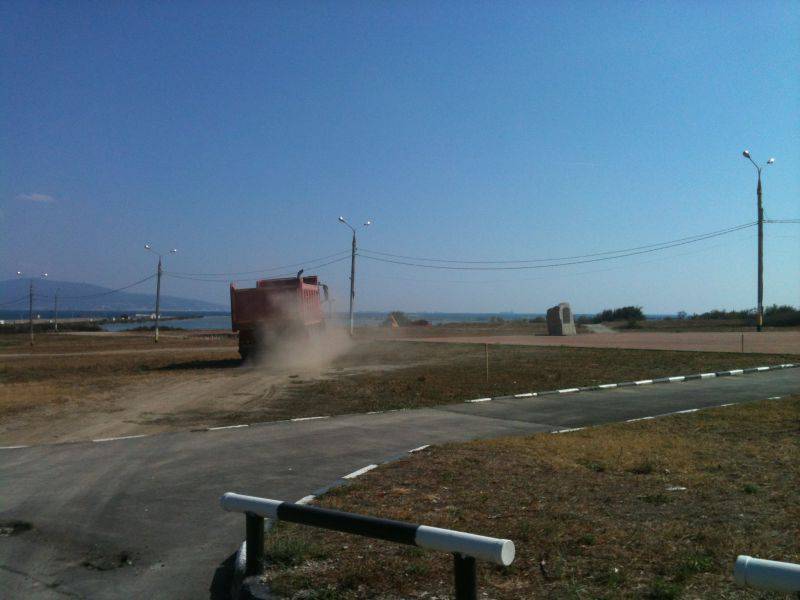 Cars rush to the construction site, however, a memorial is in the back. How is that?

But here the fun begins. When this aspect was popularly explained by the invisible “indignant”, the network surfaced, like everything that does not sink, the thesis that the cathedral will not fit into the architectural ensemble and will prevail over the terrain. As they say, by hook or by crook. True, after the verb “dovlet” there were added even more questions already from the supernatural plane. My vivid imagination has already painted a picture of the unfortunate "citizens", convulsing at the sight of the cross, and between them are priests with holy water hydrants. 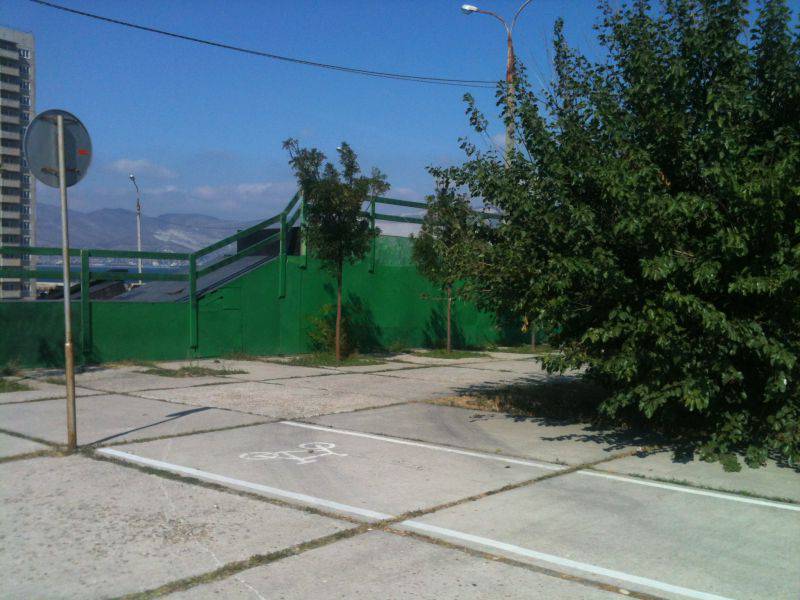 Skateboarding platform, butted against the border of the memorial complex.

But, oddly enough, the skateboarding site (after the fire painted in a poor dirty green color) fit perfectly into the memorial complex as a lifetime monument to youth sports. 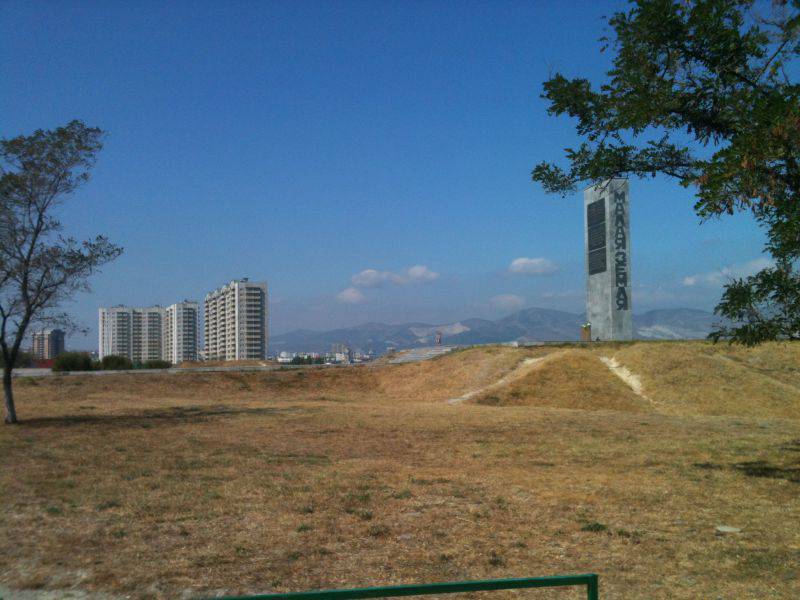 In the background are the buildings of multi-storey buildings, which are getting closer and closer to the memorial

The thin aesthetic feelings of the activists and the freshly built high-rise building, which delights the eye with the grace of square shapes, corners and concrete floors, did not prevent it at all. At least, she apparently does not "dominate." 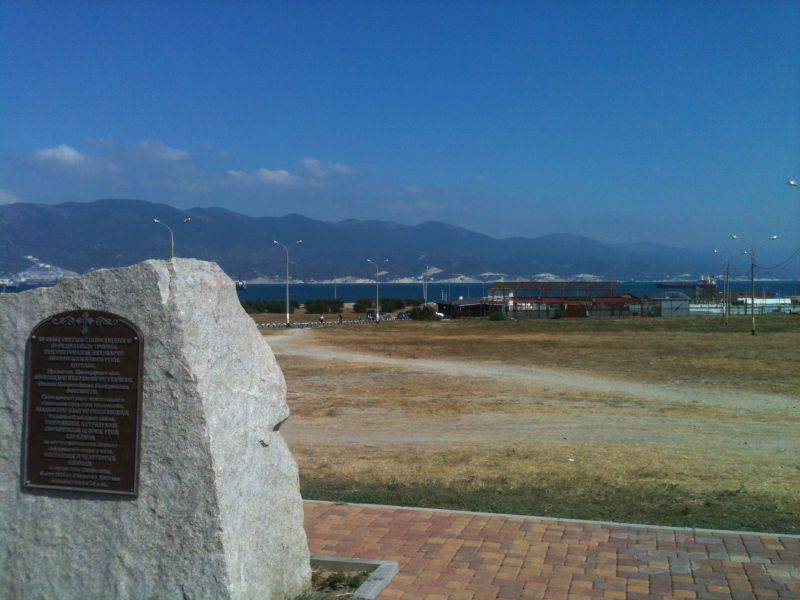 In the background of the foundation stone of the future church, the skeleton of the concert hall

Of particular spice to the memorial complex, of course, gave the neighborhood with the summer concert hall, which most of the time adorned with a rusty metal skeleton. 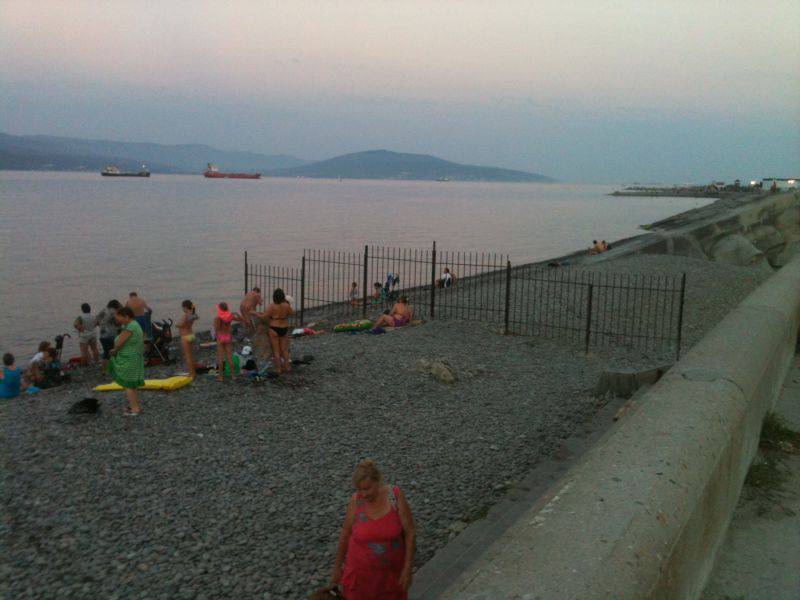 It is not surprising that none of the brave activists raised the question of the immoral joys of the bathing season directly on the territory of the memorial itself. And from the guests of the city and the townspeople, apparently, swallowing up patriotism here, had to save the memorial with metal bars, which, alas, did not help.

All this shows that metastases successfully develop, so to speak about the tumor. And these metastases have nothing to do with religious disputes about the existence of God or the church. Their task is to sow the wind for a famous crop. And this particular case is by no means any kind of action there, but a natural reaction to the introduced trend. Of course, most fans of this hateful trend do not think about the consequences, they assert themselves, albeit with marked cards. Follow in the footsteps of one of the idols of the network, the failed opposition leader, designer, blogger, in short, the man-orchestra - Artemy Lebedev: "In Russia there is only one cult worse than Orthodoxy - the cult of Victory Day."

Ctrl Enter
Noticed oshЫbku Highlight text and press. Ctrl + Enter
We are
About Stalin and KhrushchevReligious conflict in Abkhazia? It is possible
82 comments
Information
Dear reader, to leave comments on the publication, you must to register.