18 September 2015
4
The French company Nexter Systems, which recently decided to merge with the German company KMW, has demonstrated its new development. At the DSEI-2015 exhibition, held in London, the French company for the first time presented information on the VBCI-2 wheeled infantry fighting vehicle. This machine is a version of the deep modernization of the existing VBCI BMP, which has long been known to specialists and the public, as well as being mass-produced.


As follows from the available data, the new project is a development of the existing one, but differs from it in a number of innovations. In order to improve the various characteristics, it was decided to change a number of main features of the armored vehicle, which, among other things, affected its appearance. With a general similarity with the basic version of the new BMP has some differences in the design of the hull, combat module and other major units.

The upgraded VBCI-2 BMP retains the overall architecture of the base machine, but it has several differences. Thus, its body has an “old” layout, however, it differs in height and, as a result, in the volume of internal compartments. As before, in the front of the hull, at the right side, is the engine-transmission compartment, next to which there is a control compartment with the workplace of the driver. The body of the modernized machine is proposed to be made of aluminum alloys. Sheets are joined by welding. In addition, body armor is further enhanced by steel modules of the MAP system. 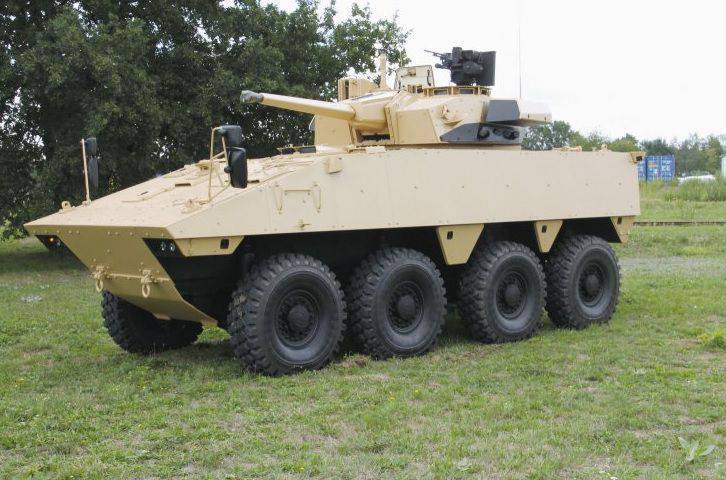 General view of the BMP VBCI-2

The combat weight of the base VBCI is 29 t. After all the modifications, its upgraded version became heavier to 32 t. Due to the increase in weight, the designers of Nexter Systems had to use a new power plant. The upgraded BMP is equipped with a Volvo D13 diesel engine with 600 horsepower. For comparison, the basic version of the VBCI machine has a D12 motor of the same manufacturer, which develops power up to 550 hp. Such a change in the power plant made it possible to keep the power density at an acceptable level - 18,75 hp. per ton. In the base VBCI, this parameter was at the level of 18,9 hp per ton.

Independent hydropneumatic suspension has undergone some modifications. In addition, larger-diameter wheels are included in the chassis. All these measures are associated with the compensation of increased weight and some increase in the characteristics of the machine.

The layout of the inhabited compartments of the BMP did not change significantly. To the left of the engine is still the driver, and behind him there is a fighting compartment with a tower and the workplaces of two other crew members. The entire stern of the hull is given under the troop compartment for six people. To increase the level of protection of the landing force, new anti-mine chairs were proposed, which reduce the negative impact of the explosion of explosive devices under the wheels or the bottom of the vehicle.

New BMP VBCI-2 equipped with a complex of modern means of observation. So, the driver's workplace is equipped with thermal imaging devices to control the machine in the dark. In addition, there are several video cameras installed in different parts of the body, providing circular observation of the environment. The signal of these cameras is displayed on the displays installed on the control panels of all crew members. The machine is equipped with a modern digital communication and control system compatible with the FELIN complex.

An upgraded version of the infantry fighting vehicle receives a new combat module. For use on the VBCI-2, a prospective T40 system is proposed, which is also planned to be used on the EBRC Jaguar reconnaissance vehicle. This combat module is a two-seat turret with cannon, machine gun and rocket weapons, as well as a set of surveillance and weapon control systems.

The basic one weapons The T40 module is an automatic gun 40 CTAS caliber 40 mm. This gun was developed by CTA International, a joint venture between Nexter and BAE Systems, and has several interesting features. The 40 CTAS cannon should use advanced 40-mm telescopic ammunition, which, according to the authors of the project, can significantly improve its performance and ensure superiority over similar systems of other types. On one installation with a gun mounted twin machine gun caliber 7,62 mm.

T40 turret can carry and missile weapons. Mounts and protective covers are provided on the sides of the combat module for four transport-launch containers with guided missiles. According to reports, in this configuration, VBCI-2 will be able to carry promising European MBDA MMP missiles or existing American Javelin.

It is proposed to install an additional remote-controlled system with a rifle caliber machine gun on the roof of the combat module T40. The presence of two independent combat modules will allow you to attack multiple targets simultaneously, which will significantly increase the firepower and combat effectiveness of the machine.

The design of a promising infantry fighting vehicle allows the use of other combat modules. For example, potential customers are already offered a version of the VBCI-2 BMP with a smaller tower, armed with a Bushmaster Mk 44 automatic cannon, caliber 30 mm. Due to the different layout of this combat module, it is possible to free some volume inside the hull, which can be used to accommodate several additional landing sites. In addition, there may be other proposals relating to the weapons complex. 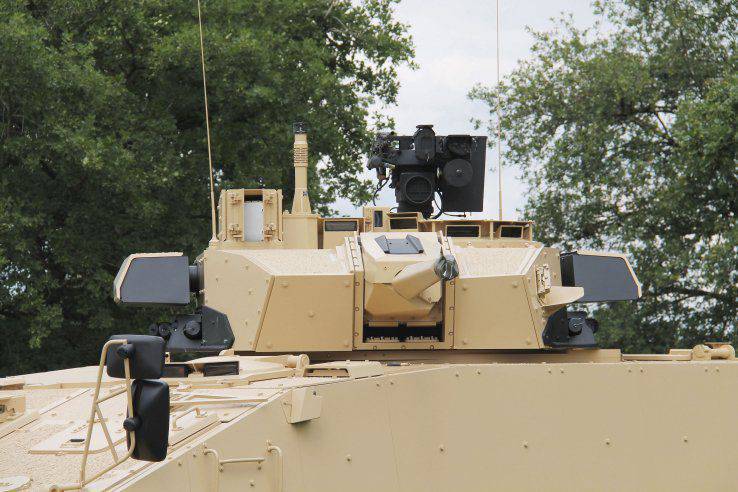 The assembly of the first prototype of the promising BMP was completed just a couple of days before the start of the London exhibition. As follows from the available data, for this reason, the car could not be delivered to the UK on time and showed to the guests of the DSEI-2015 exhibition as a full-scale sample. Nexter Systems had to limit itself to advertising materials and photos.

It should also be noted that not all features of the machine allow us to consider it a full-fledged prototype, able to go through all the stages of testing and fully demonstrate its capabilities. For example, the prototype VBCI-2 does not carry a full-fledged missile system. Instead, used mock launchers mounted on the sides of the tower.

It is noted that the VBCI-2 project was developed by Nexter Systems in a proactive manner, without an order from any country. It is also known that the main goal of the new project is to receive orders for the production of such equipment for foreign countries. For obvious reasons, there is not a single contract for the supply of new cars, but some potential customers have already shown interest in this technology. From unofficial sources it is known that the promising infantry fighting vehicles have already been able to interest the military of Qatar and the United Arab Emirates.

The first information about the promising project VBCI-2 was announced at the recent exhibition DSEI-2015, but the prototype could not get to this event. This is not a reason for frustration, since a prototype of a new BMP can soon be shown at any other exhibition of weapons and equipment in which Nexter Systems will take part. At the same time, potential buyers will be able to “personally” get acquainted with the new armored vehicle and draw conclusions, having decided whether they need such equipment or not. Therefore, in the near future, new messages may appear about the fate of an interesting project and orders for promising equipment.

Ctrl Enter
Noticed oshЫbku Highlight text and press. Ctrl + Enter
We are
Failures and good luck of the western projects on the armored personnel carrier and BMP. 2014 Results of the YearRussia demonstrated the most promising weapons at INDO Defense-2014
4 comments
Information
Dear reader, to leave comments on the publication, you must to register.