18 September 2015
102
The American Ambassador John Tefft was tired of the stuffy Moscow, and he decided to take a deep breath of the Pacific air, having recently set off for Vladivostok. Officially - to visit the American consulate in this city, as well as to get acquainted with history Far East of Russia. At least, this is how Tefft’s visit to the other edge of Russia is explained by representatives of the diplomatic mission, which, in turn, are referred to by our news agencies.


In connection with Tefft’s visit to Vladivostok, an interesting fact attracts attention: for three days the chief American diplomat (on the territory of Russia) visits the Far Eastern region, and all the information resources of the American embassy on this issue are silent as fish. Not only the website of the American diplomatic mission is silent, but the US Consulate in Vladivostok is also silent. “Embassy” pages on social networks are silent. Silent the blog of Mr. Tefft himself. 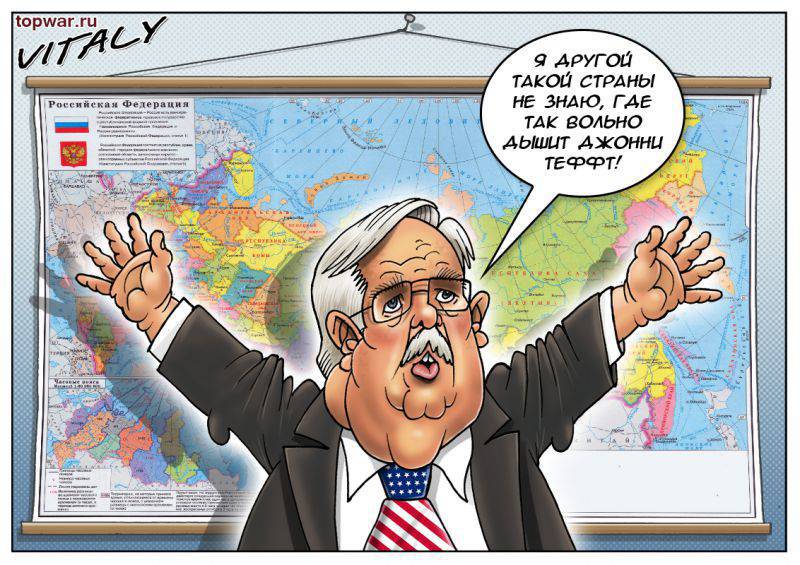 It would seem, but what is actually reprehensible here - they are silent, and let them be silent - now what should he tell about each step of the ambassador in Russia? Yes, that's the whole point. “The ambassadorial steps, with a truly impressive amount of information resources on which the American diplomatic mission in the Russian Federation relies, are far from being covered with such expression, such as the fact that the American Center at the Foreign Languages ​​Library is closed in Moscow. Not with such expression, as the American embassy tells about the “Russian aggression in Ukraine”. Not with such expression as the publication of angry speeches about the detention of Ms. Savchenko, accused of the murder of Russian journalists. Yes, yes, not at all with this ...

The information resources of the American embassy in Russia are needed by this very embassy not at all to talk about the activities of the diplomatic mission in the Russian Federation itself, but in order to drive a frankly propaganda wave with a persistent pull over the ears of facts and things that fit with American interests. It seems that the US embassy has a lot of information resources, but they are all “informational” as much as the informational propaganda machine itself. About all the steps of the ambassador only after he made them, but here, too, without any special informational placers. In general, Tefft travels around Russia, but, you know, old John does not want to open up to his beloved Russians, oh, he does not want ...

Instead of objective information about who Ambassador Tefft decided to meet specifically in Vladivostok and why, in "News" a number of the website of the diplomatic mission "hangs" especially "wonderful" collection. The Russians are told that Ms. Power said during her visit to Kiev that the American Disability Act (1990 of the year) turns out to be inspiring by the whole world and more about what the US representative to the OSCE said on the anniversary of the deportation of the Crimean Tatars. Is there some more "news»About Kerry’s statements on Iran’s nuclear program. It would seem, and here Russia, and where is the US embassy in Russia? ..

You can think for a long time about why Tefft was drawn to the Far East, and chew on the topic “isn’t he preparing a local maydanchik there, for an hour?”, But now it's not just that. It is clear that Tefft just will not go anywhere, and that the history of the Far East is not something that can attract the attention of any American ambassador in this region (even if the ambassador got acquainted with the monuments and the exposition of local museums).
In fact, the Far East is a region in which various geopolitical interests converge, and which at the same time has a significant problem - low population density for the development of gigantic natural resources. And it is precisely this problem that Washington has taken on a pencil, and it needs to be specified through Ambassador Tefft and the American consular officers on the spot. But after all, North Korea, which before the new American strategy was listed along with Iran as the "main threat to democracy" ... Plus the Far East of the Russian Federation - this is the Kuriles, which, according to the allies (or are vassals?) The US in Tokyo , “Not so simple” ...

In general, the work for the old John car and a small truck, and because John is working. Often meets precisely with Russian citizens (students, “activists”, local authorities, representatives of well-known political parties), oppression of their own line - a fact remains. Not only, by the way, in Vladivostok and Moscow. Tefft had already managed to visit Tatarstan, Yekaterinburg, Yaroslavl, met with those with whom he intended to meet.

And this is where the main questions for this material arise. Whether the Russian embassy in the United States is even more modest in terms of covering embassy activities than the American embassy in the Russian Federation, or simply the author of the material can’t remember when the head of the Russian diplomatic mission in the United States met with the authorities of, for example, Alaska? - Is there really nothing to discuss? ..

When did the press service of the Russian embassy express concerns about the disproportionate use of force by the US police and national guard in Ferguson?

When did the ambassador and the consuls go to American universities to meet with the students and the faculty?

When did the ambassador meet with representatives of the “political councils” of American parties? - They say they do not want to meet? - And if it is better to ask ... Bake cookies ...

Or do we have all Zurabovs in the diplomatic corps in the USA, which even before participating in the “contact group” of the Russian Foreign Ministry does not run the risk of ...

I would like to hope that with the “Zurabovs” in our foreign diplomatic missions (not only Ukrainian or American, by the way), I bend a stick, that everything there, as they say, is diplomatically adjusted and that ambassadorial workers are engaged not only in phoning to coordinate meetings and celebrations opening dates of the embassies themselves. But for now, there is a feeling that there are only two diplomats in Russia, Sergey Lavrov and Maria Zakharova, whose activity is hard not to notice ... Oh, and Vitaly Churkin! But "on the ground" it is painfully quiet ... But after all, the States themselves demonstrate to us that it is often "from the field" and it is more effective to promote our own interests.

Ctrl Enter
Noticed oshЫbku Highlight text and press. Ctrl + Enter
We are
Results of the week. “We can expect everything from these bees”The fight against terrorism. An inside look (blog of Ingushetia special forces)
102 comments
Information
Dear reader, to leave comments on the publication, you must to register.