18 September 2015
113
The coalition, led by the United States, did not achieve the expected results in the fight against the "Islamic State." Meanwhile, Russia and Iran are seeking to join forces with the Syrian government opposing the terrorists. If a new alliance takes place and if Russia and Iran overcome Islamists, the United States will lose its ability to influence the situation in the Middle East. Experts even speak about Putin’s coming “star hour”. 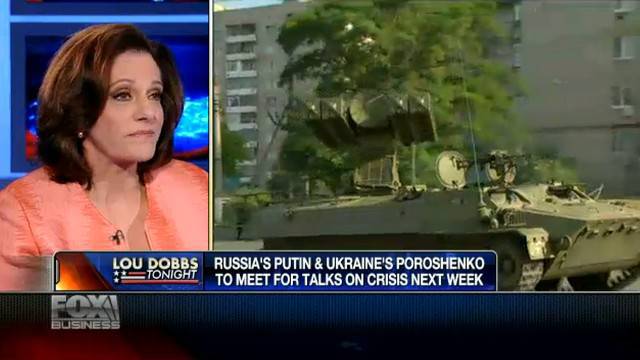 Fox News's national security analyst Kathleen McFarland (in the past, in the times of Ronald Reagan, she was deputy assistant secretary of defense) spoke on the theme of the “coalition” opposing the US-led IG, and the actions that Russia and Iran. Translation of the interview appeared on the website of the TV channel "RT".

According to the expert, the White House, arguing that Russia could join the coalition of the 60 states leading the fight against the "Islamic State", is engaged in "empty talk." Another thing is Putin.

“This campaign against the“ Islamic State ”, which is designed to crush, destroy and weaken it, fails completely. And who is aware of this? Vladimir Putin. It is his finest hour. In the Middle East, he is doing what he was trying to do in Ukraine, that is, to gain a foothold in the region. He knows that our union is helpless, that it does not work, and he uses it. ”

Grozny Putin "reverses 40 years stories"For which the US" ousted Russia from this region. " The analyst also notes that "a new coalition is emerging between Syria, Russia and Iran."

But can Russia, Iran and Syria defeat the Islamic State?

McFarland thinks that “ultimately the battle will end with this.” Now the Russian side is uniting with Iran, from which sanctions are being lifted. Russia plans to sell Iran weapon, and the Iranian general Kasem Suleymani recently came to Moscow.

However, the question of much greater significance for McFarland is not the victory over the “IG”, but the further fate of the native America. She believes that it is “not important” whether Russia, Iran and Syria will crush terrorists, and it is important where the United States will be. In her opinion, the United States is already “somewhere else”; The United States no longer take part in events in the Middle East.

It is curious that at the same time, McFarland (an expert with government experience!) Further states that in the Middle East "you will not understand anything." On the other hand, she cannot dismantle the policy of her native state: “The United States is allegedly struggling with the“ Islamic State ”, but in fact it does not.” According to McFarland, Washington shifts “all responsibility” to Iran. But if the White House really wanted to fight against IG, it would have armed Kurds and Sunni tribes in the Iraqi province of Anbar. However, Obama is not doing anything, and in the meantime Iran is taking over the reins. As a result, Iran will enter into an alliance with Russia, the two countries will support Assad in Syria. And who will pay for it? USA: they "will lose influence in the region."

This region is so worried about the expert because there is oil there. McFarland says bluntly: “Think about what geographical region we are talking about. What do Russia and Iran have in common, what controls this region, as does Russia? World oil market.

In addition, sea lanes are also important: “We are talking about the Mediterranean Sea, and they control it all the way to Iran. This means that they control the Middle East, the region called the Levant, and then the Arabian Peninsula and the Persian Gulf. ”

Apparently, such a change in the geostrategic situation while strengthening the positions of Russia and Iran is so unbearable for McFarland that it suggests that the White House urgently show determination and unleash almost the Third World War:

“This is what I would say if I were an adviser to the president. First, let's restore the defense of America first. Let's give Ukraine a weapon, say: "Here, we will not fight for you, but we will help you in your struggle with Russia." The Kurds want to fight the "Islamic State" - we will help them too. I would walk across the world map and answer the question: “Who are our friends and how can we help them? It is not necessary for us to fight ourselves. ”


Interesting, we note, is the "defense of America"! “It’s not necessary for us to fight ourselves” is obviously the defensive principle of modern times.

Of course, “to fight for yourself” is an idea that is not popular in America today. The Americans were already fighting in Iraq and Afghanistan. And indirect intervention in Syria, the encouragement of the “opposition” and the “Arab spring” in general, stimulated the chaos in the Middle East and partly contributed to the emergence of the “IS”. In Ukraine, with the intervention of the United States instead of democracy, the “European version” of Somalia turned out: oligarchy, corruption, amateur republics, banditry, inflation, huge public debts with the complete helplessness of the new government. Apparently, the main achievement of “euromaidan” was Klitschko’s choice as mayor of Kiev. But the showcases of democracy from Ukraine did not work, it turned out another failure and disintegration, and even optimist Saakashvili in his Odessa post is more upset than happy.

By the way, it’s not for nothing that an American expert asks: “Who are our friends?” Saakashvili and Klitschko are your friends. And the likes of them all over the world. And your McCain in Syria has friends from IG. And al-Qaeda was once a great American friend.

At the end of the interview, McFarland attacked Putin.

“As for Vladimir Putin, I would explain to him the following:“ You remain in power only because your people live in the world you created. We will destroy the cyber wall, and they will see what is happening in the rest of the world. And then we will see how popular you are. ”

Than how and when cyberwall will collapse, McFarland did not specify. Perhaps, with the weapons that the United States will eventually give Ukraine so that it goes to fight the self-proclaimed republics and at the same time go to war for the Crimea. The expert, however, should understand that far from the entire US Congress is in favor of providing military assistance to Ukraine, Obama is not a supporter of this idea either, and if Republican Trump comes to power in the White House, the question of Crimea (and Ukraine) can get away with State Department agenda. There is, however, a chance to choose a president in the United States named Hillary Clinton with her “wow” and “Assad must leave.” However, in any case, Western Europe, primarily Germany, will be the counterbalance to the aggressive policy of Washington in Ukraine. Angela Merkel has already been to Washington on the Ukrainian issue, and can repeat her visit. The European Union is already crazy about refugees, and he does not need Ukrainian Syria by the side.

Retreat, reducing the degree of his "hegemony" - the surest thing for the United States. Managers call this a "pruning strategy." Military budgets are being reduced, the number of military personnel is decreasing, and corresponding measures are planned for a full ten years. With such cuts, trying to live as you did before cuts, and helping “friends” around the world does not seem reasonable.

Today, the Arab media speak about Russia with respect, and about the United States - almost with disdain. For example, Al-Arabia writes that Moscow does not hide its support for Bashar al-Assad. And he does not hide the supply of weapons and military equipment to Syria. Russia has not changed its position on Syria, says the browser. Moreover, it is now ready not only to preserve the current government in Damascus and to help it in every way, but also to promote the formation of a different political approach, implying partnership with the Syrian and regional forces to fight terrorism.

But the Western powers, including the United States, Great Britain, France, have changed their position, even if they are talking about Assad being deprived of power. The leaders of these states, in the opinion of Al-Arabia, are ready to "reconcile" even with the support of Assad by Moscow, Tehran and Beijing.

In a word, Eastern analysts (unlike American analysts) clearly understand that the United States leaves the game in the Middle East, and Russia comes there, which will certainly help Syria and create a coalition with its Syrian ally Iran.

Observed and commented on Oleg Chuvakin
- especially for topwar.ru
Ctrl Enter
Noticed oshЫbku Highlight text and press. Ctrl + Enter
We are
Results of the week. “We can expect everything from these bees”Egypt: between Russia and America
113 comments
Information
Dear reader, to leave comments on the publication, you must to register.