21 September 2015
32
In the course of deep modernization, weapons or military equipment can not only receive new opportunities, but also change their appearance. A great demonstration of this is the new, upgraded version of the X-59МКХNUMX air-to-surface guided missile, presented at the recent MAKS-2 cabin. This development GosMKB "Rainbow" them. AND I. The Bereznyak, which is part of the Tactical Missile Weapons Corporation, is a further development of an existing product, but it is very different from it and can even be considered a completely new product.


The proposed guided missile, apparently, does not yet have its own name, which is why the designation “Modernization option” was present on the information stand aviation Kh-59MK2 guided missile. ” Nevertheless, the basic and modernized X-59MK2 missiles are seriously different from each other both externally and in the layout of the internal volumes of the hull. At the same time, the manufacturer is not in a hurry to assign its own unique index to a newer development.

The new version of the X-59MK2 rocket is designed to destroy various enemy ground targets. The possibility of attacking targets that do not have a contrast with the surrounding background and do not differ from it in the radar, thermal imaging and optical ranges. At the same time, the rocket needs pre-explored coordinates of the target and information signs of its location. The carriers of the new rocket may be various existing and prospective tactical level aircraft. To use the upgraded X-59МК2 rocket, the carrier aircraft must have appropriate devices for transportation and launch. weapons, as well as a modified complex of electronic equipment. 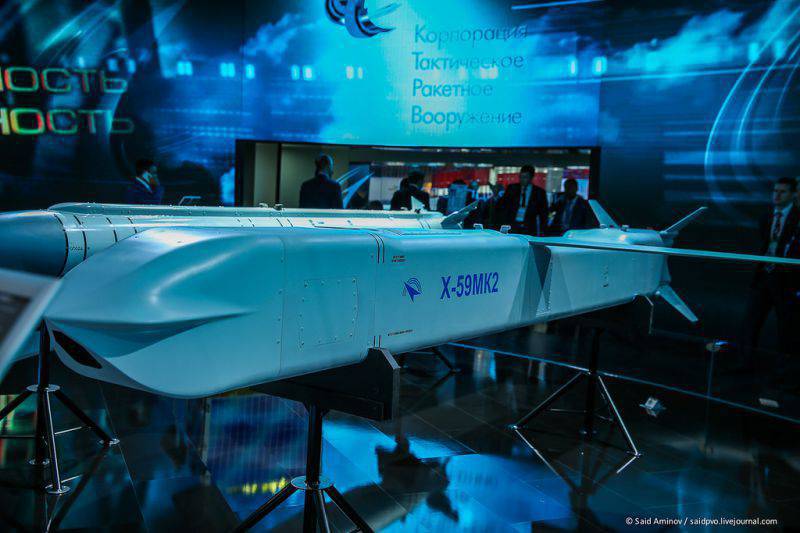 General view of the updated X-59MK2 rocket. Photo by Saidpvo.livejournal.com

The appearance of the new product immediately catches the eye: the upgraded X-59MK2 is seriously different from the base rocket, both in the outlines of the hull and in the aerodynamic layout. In order to improve the characteristics of the updated weapon has a seriously redesigned body with a different layout of units. Processing of the structure allowed reducing the dimensions of the product, as well as reducing its visibility for radar detection devices.

The updated X-59MK2 rocket has a large elongation body with a total length of 4,2 m. Unlike its predecessors, the new ammunition has a body with a close to rectangular section and rounded corners. The head fairing of the rocket got a complex shape formed by the conjugation of several straight and curved surfaces. When this fairing has a pronounced horizontal ribs in the middle part. On the bottom panel of the fairing there is a window, probably given under the air intake of the main engine.

The cross-section and dimensions of the body, given by the head fairing, almost do not change throughout its length. However, in the central part of the hull, a characteristic recess is provided to accommodate the wing consoles in the folded position. To improve flight performance, the X-59MK2 rocket in the updated version is equipped with a folding wing with a span of 2,45 m. When transporting the product, the planes are laid along the body, and during launch they are folded forward.

In the tail part of the body, rounded corners pass into wide bevelled surfaces. In these parts of the hull are attached X-shaped folding wheels. To reduce the size of the rocket, the rudders are made of two parts and can be folded along the walls of the hull. With folded wing consoles and rudders, the maximum cross-section of the rocket fits into a square of size 40х40, see. The starting weight of the product does not exceed 770 kg. These features facilitate the storage of the rocket, as well as provide the possibility of its use as part of the armament complex of promising aircraft with internal load carriers.

Rocket X-59MK2 in the basic version has a different aerodynamic configuration. Recall, it is equipped with a cylindrical body with a hemispherical head fairing, small stabilizers in the nose and swept wings with rudders in the tail. 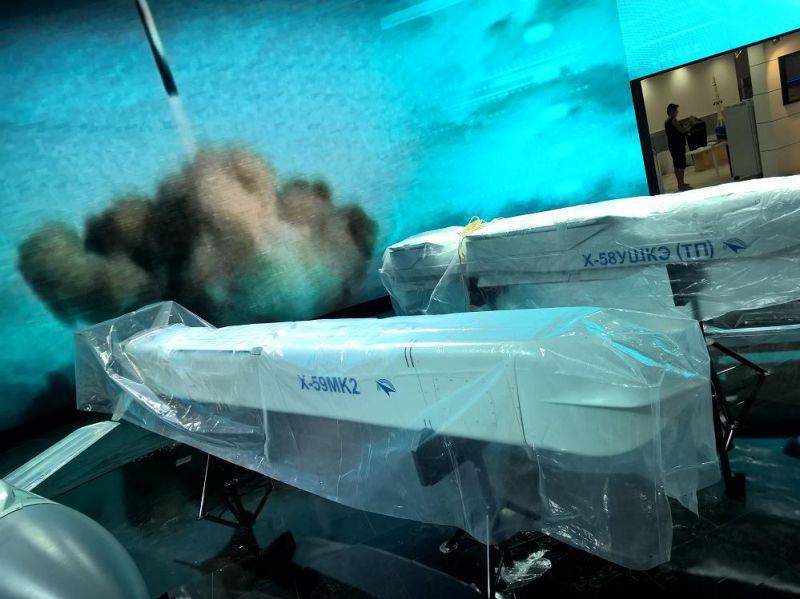 The updated X-59MK2 rocket receives a guidance system based on the corresponding units of the base product. The combination of the homing head includes a strapdown inertial navigation system, an optical-electronic system, and an instrument for receiving signals from satellite navigation systems. Due to this, a rocket can attack targets that do not stand out from the background of surrounding objects, using only known coordinates of an enemy object for pointing. The guidance system of the new missile operates on the “launched-forgotten” principle and does not need additional commands after launch.

According to the developer, the new rocket can be launched by a carrier aircraft at altitudes from 200 m to 11 km with flight speed from 0,5 to 0,9 M. During launch, the target must be within the sector of the forward hemisphere 90 ° wide. After dropping from the carrier, the rocket automatically drops to and moves to the target at the lowest possible height within 50-300 m. The combined guidance system allows you to destroy targets with a circular deviation of no more than 3-5 m.

The X-59MK2 missile can carry two types of warheads. Depending on the type of target, a high-explosive penetrating or cluster warhead weighing up to 310 kg can be used. Such equipment allows you to attack and successfully destroy various ground targets, both point and area.

In the rear part of the hull of the upgraded rocket is placed a small-sized turbojet engine. An important innovation of the updated project X-59MK2 was the change in the design of the power plant. In the basic design, the engine is placed in a separate fairing suspended under the rocket body, which negatively affects the dimensions of the product. The upgraded ammunition received a built-in engine located in the tail section of the hull, which made it possible to bring the dimensions of the entire rocket to the minimum possible. In the central part of the body is the fuel tank, the filling neck of which is brought to the port side.

The turbojet engine used allows the new rocket to reach speeds of up to 750-1000 km / h. The supply of fuel is enough to deliver the warhead to a distance of 290 km. It should be noted that the actual flight range can be significantly higher. It is quite possible that in the future foreign customers will be offered an export version of the new rocket, and in this case, the manufacturer should take into account the restrictions imposed by the Rocket Technology Control Regime. This international treaty prohibits the export of missiles with a range of more than 300 km. Thus, the range of no more than 290 km can refer only to the export version X-59МК2, and the missiles for the Russian Air Force will be able to fly a greater distance. 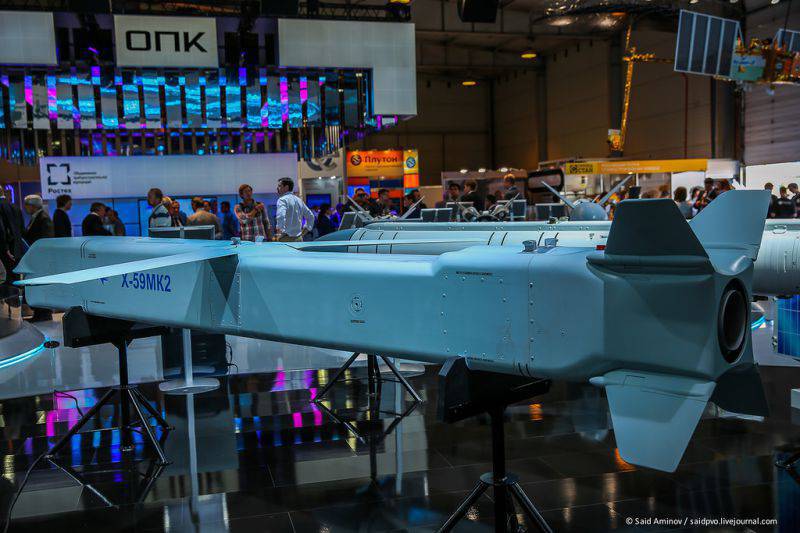 The tail of the rocket. Photo by Saidpvo.livejournal.com

It is easy to see that the new domestic air-to-surface guided missile has a number of characteristic features characteristic of foreign weapons in recent years. The specific design of the body, aimed at reducing radar visibility, as well as a number of measures to reduce the dimensions in the transport position, allow us to consider the updated X-59MK2 the Russian response to foreign AGM-158 JASSM, Taurus KEPD-150 / 350, etc. Sometimes you hear that in this direction the Russian industry has lagged behind foreign. In this case, the upgraded X-59MK2 rocket is of great importance for the development of domestic aviation weapons.

According to the developer, the updated X-59MK2 guided missile can replenish the range of weapons of several types of aircraft. Already existing Su-30MK, Su-34, Su-35, MiG-29K, MiG-35, etc. aircraft. may use the proposed rocket after appropriate modifications of onboard avionics equipment and installation of AKU-58 aviation ejection devices. "A promising aviation complex - a promising multi-role fighter" (PAK-PMI) will be able to use the proposed rocket with ejection devices UVKU-50 installed in the internal cargo compartments.

To date, the Raduga GosMKB, which is part of KTRV, has shown only a model of a promising aircraft missile to destroy ground targets. The current state and prospects of the project have not yet been clarified. Probably, in the future tests of the new weapon will take place, after which it will be recommended for adoption. However, while the updated X-59MK2 is only an exhibition sample, attracting the attention of specialists and interested the public.