16 2011 June
19
The APS pistol was developed at the end of the 1940s - early 1950s by the designer I.Ya.Stechkin and was adopted by the Soviet Army in the 1951 year, simultaneously with the Makarov pistol (PM). APS (Stechkin Automatic Pistol) was intended as a personal weapons self-defense of certain categories of military personnel and officers who were not supposed to have a Kalashnikov assault rifle or SKS carbine on their staff, and Makarov’s pistol seemed insufficient. These included, for example, crews tanks and combat vehicles, gun calculations, grenade launchers, officers operating in an active combat zone. Compared to PM, the APS provided significantly greater firepower and combat effectiveness due to the larger magazine capacity and a longer barrel. In addition, to increase the accuracy of shooting, a gun holster was attached to the gun, adjacent to the handle. If necessary, fire from the APS could also be fired in bursts, while due to the presence of a moderator of the rate of fire, the gun remained more or less controllable. Despite these advantages, the APS, especially in combination with a standard holster-butt, was too bulky and heavy, it interfered with the emergency abandonment of military equipment and as a result was soon removed from the arsenal of the SA and sent for backup storage. 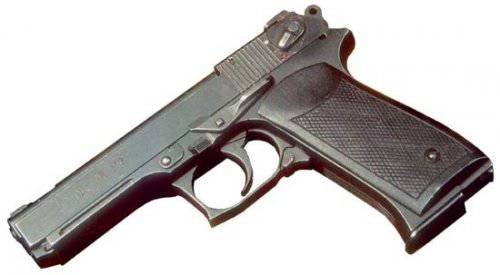 With the increase in crime in the early 1990-s, the law enforcement forces of Russia found that a regular PM pistol has insufficient combat effectiveness, and the Kalashnikov assault rifles are often excessive in power. Submachine guns could be the best solution, but they were not yet in mass production, and therefore various OMON, SOBR and other units began to buy copied from the army, but quite capable APS. Even now, in the 2003 year, when there are various submachine guns, and more powerful pistols of the newest systems, many representatives of the "organs" still prefer Stechkin for its cheapness, wide availability of ammunition, and quite good combat characteristics. True, instead of heavy and uncomfortable in wearing regular holster-butts, it is often used open-type artisan or commercial holsters, which are much lighter and allow for quick removal of a pistol. 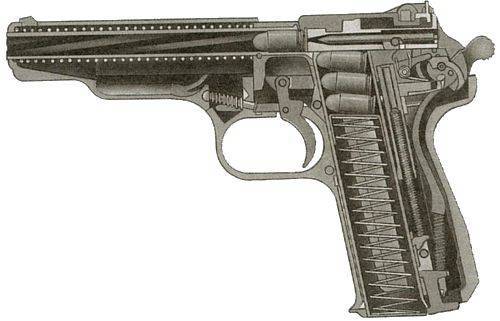 Pistol APS built on the basis of automation with a free gate. The double-action trigger and trigger mechanism allows for the opening of fire both by self-platooning and by preliminary manual cocking of the trigger. Manual fuse is located on the gate and when turned on blocks the drummer and the bolt. In addition, the fuse also serves as a translator of fire modes, allowing you to select single shots or bursts of fire. To achieve a reasonable rate of fire with a small mass of the bolt in the gun provides an inertial rate of fire rate, located in the handle. The sight of the original design has the installation range for 25, 50, 100 and 200 meters. The standard holster-butt of the closed type is made of wood (early versions) or plastic and adjoins the pistol grip. A steel magazine with a double row arrangement and an outlet of cartridges accommodates 20 cartridges, the magazine latch latch is located at the bottom of the handle.

On the basis of the APS in the 1970-ies for the special forces of the Army and the Ministry of Internal Affairs was developed a special version of the gun APSB, complete with an elongated barrel with a thread in the muzzle, allowing to install the device for silent shooting (silencer). APSB pistols were also equipped with a light detachable butt wire.
Ctrl Enter

We are in Yandex Zen
Turn under water
Pistols of Russia - expert opinion
19 comments
Information
Dear reader, to leave comments on the publication, you must to register.