17 September 2015
106
The scandal with the publication of caricatures in “Charlie Hebdo” is gaining momentum. It is possible that the editors will be attracted to an international court. The public in social networks found in cartoons of a drowned Syrian boy a variety of meanings, including a poisonous mockery of migrants, as if traveling to Europe not for the sake of salvation, but because of the blessings of a well-fed and peaceful life. Cartoonists, however, do not agree with the public reaction. 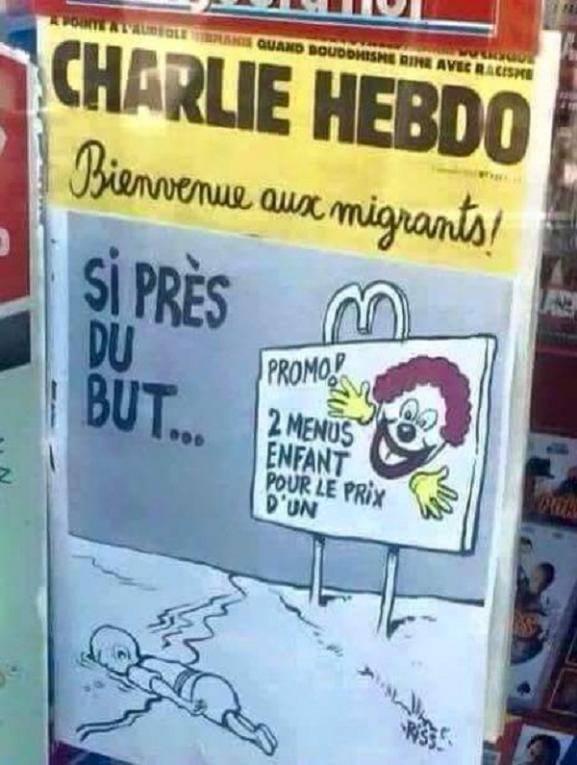 One of the cartoons depicts Ilan lying on the sand. The above inscription: "So close to the goal." Nearby we see a fast food café banner: “Two children's menus for the price of one”

Two weeks ago, journalist Nilufer Demir from Bodrum (Turkey) photographed the body of a three-year-old drowned Syrian boy named Alan Kurdi. His family fled Syria by sea. Overloaded boat capsized; the body of the child carried to the Turkish coast. A photograph of a Turkish journalist was sold in front pages of European newspapers.

The flash of the picture in a major press attracted the attention of the staff of the magazine “Charlie Hebdo”, which became “famous” for the whole world thanks to the caricatures of the Prophet Mohammed and the subsequent deadly terrorist attack.

This time, the artists depicted caricatures of the deceased Syrian boy. On the cover of the magazine appeared a dead child lying on the beach. Background: a big billboard with an advertisement for a fast food restaurant: “Two children's menus for the price of one.” And above the boy - the inscription: "So close to the goal."

And one more caricature: "Proof that Europe is Christian." It depicts a smiling bearded Jesus in a crown of thorns, easily walking on the water, and the boy's legs sticking out of the water. "Christians walk on water, and Muslim children are drowning," the cartoon says.

This time, the inhabitants of social networks did not shout "I am Charly", but subjected the magazine to sharp criticism.

According to many Internet users, “Charlie Hebdo” lost its bearings and attacked the “defenseless” with its drawings. The magazine was also accused of racism, intolerance, immorality and cynicism. It got to the point that the French community of black lawyers threatened to file a lawsuit in the International Criminal Court (ICC).

In Russia, social networks are also overwhelmed with comments about new French caricatures. The authors of the reviews consider the drawings “utterly abominable”, “mockery over the corpse”, “ridicule over Christianity”, as well as “ridicule over Islam”: they say, the artist had in mind the following: if Muslims drown, then “that's what they need”.

There is also such a (positive) interpretation of the drawings: “You (that is, Europeans) consider yourself to be Christians, and children are dying nearby!”

From such contradictory responses it can be seen that there is no single point of view on caricatures. People did not understand the idea of ​​cartoonists.

The noise in the networks and the press forced the authors of the cartoons to explain their creative idea. The explanation was made for Russian readers as well.

Initiated by the TV channel LifeNews: its employees turned to the editorial board of Charlie Hebdo with a request to decipher the meaning of the drawing. French cartoonists answered the letter.

“This tragic image of little Ailan has become a symbol of the plight of migrants and refugees today,” answered Charlie Hebdo. - Our works cover the same events as you (journalists. - LifeNews). It is human trafficking, organized by smugglers, and illegal migrants fleeing the disaster zone, and Europe’s inaction. ”

The editorial satirical edition complained that the audience does not know how to understand social satire. Caricaturists do not consider most of the accusations to be fair: after all, “Charlie Hebdo” stands for human rights and objects to discrimination.

“You need to be able to correctly read the message of this cartoon. This is ignorance that kills our colleagues and friends, the letter says. “Charlie Hebdo has always been on the side of equality, on the side of illegal migrants, always fighting against racism and discrimination, against injustice and abuse of authority.” 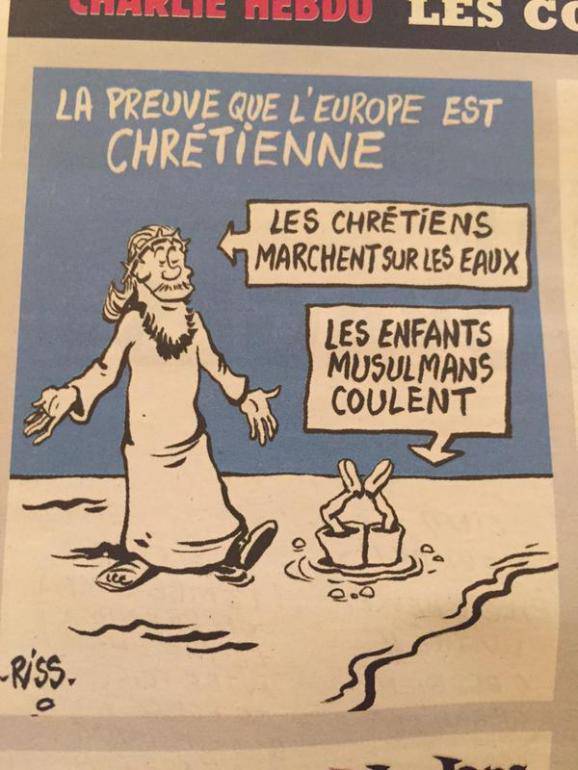 This cartoon, titled “Proof that Christian Europe”, shows Jesus walking along the water beside the boy. He says: “Christians walk on water. Muslim children are drowning. ”

Two excuses can be drawn from this excuse, we add.

The first. Probably, the cartoonists wanted to show that Europe had given the refugees to the mercy of Christ, doing almost nothing to save them.

Second. Cartoonists stepped up the moral line by drawing a fast food ad near the child. Could not resist, must be, from the black humor. And this “impetuous” caricature has led to a flurry of criticism from the world community. If the concept of one picture can still be interpreted, then questions arise to the other. Even more questions appear when you see both pictures side by side.

If an artist managed to do it with one illustration, the public might consider the publication to be bold or slightly beyond, but no more. Scandal could not be.

Again, the scandal for publication is an additional opportunity to attract attention. It is possible that the editors anticipated the scandal and even “anticipated” him.

Condemning the cartoons, we believe the public is right. The massive, on a global scale, lack of understanding of the social satire of the journal and a large number of its contradictory interpretations suggest that the authors should reconsider something in their approach, otherwise they will not have any admirers. In any art requires a clear understanding of the idea. If it is not, the artist loses benchmarks, unable to choose the main one. It is also good to have a sense of proportion.

Both of these items were broken by artists.

Good for the author to also thoroughly know your audience. In fact, today French caricaturists create illustrations for an audience that cannot understand them. But this means that the audience as such does not exist!

Instead of explaining the meaning of their drawings to the public, caricaturists would rather listen to criticism and apologize for the child at the billboard with fast food advertising.

As for the message about the “inaction of Europe,” Syrian President Bashar Assad spoke out clearly and unequivocally.

According to him, Europe, if it really wants to solve the problem of refugees, should stop supporting terrorists.

“The question is not whether Europe accepts refugees or not, but the need to remove the root causes of this problem,” the Syrian leader quotes. LifeNews. - If Europeans are concerned about the fate of the refugees, let them stop supporting the terrorists. This is our opinion on this issue. This is the essence of the refugee issue. ”

Further, Assad said about the possibility of reaching agreements between political forces in Syria, but expressed doubt that they can be implemented without a victory over terrorism.

Asad is absolutely right. But is Europe able to think? Not long ago, the French and British governments were eager to help. weapons and the bombing of "moderate opposition" to overthrow the "tyrant" of Assad and to carry out the ideas of "democracy" in Syria. Fighting Frenchman Hollande and hunter deer Cameron stopped two reasons: the disagreement of British parliamentarians and the reluctance to fight Barack Obama. Later, the “Islamic State” appeared in Syria and Iraq - the fruit of joint destructive activities of the West in the Middle East. The West is aware of the fear of militants cutting their heads, horrified by the number of refugees, but does not recognize its mistakes and does not wish to help Assad in the fight against thugs.

And this is what the real “Europe’s inaction” means.

We are in Yandex Zen
Results of the week "I do not need a Turkish coast"
Results of the week. “We can expect everything from these bees”
106 comments
Information
Dear reader, to leave comments on the publication, you must to register.