25 September 2015
54
We drank for the queen / For our sacred house / For our English brothers / (We don’t understand each other) / We drank for the universe / (The stars will go down in the morning) / So we will drink - rightly and duty! / For those who were born here! 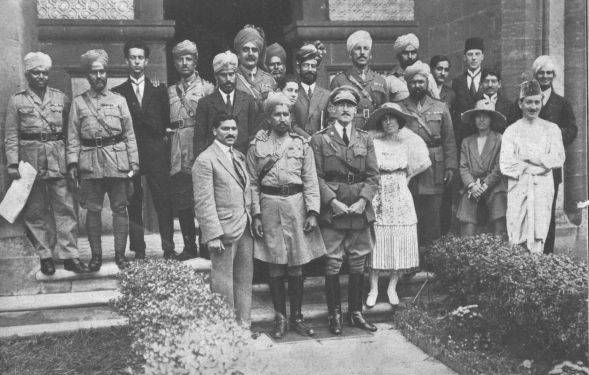 Here they are - the Anglo-Indian officers of the time of Kipling.

And it was so that once these lines were written by Rudyard Kipling in his poem “By the Right of Birth”, describing, in general, the typical and everyday scene for the British colonial troops: British officers sit and drink! Toasts are made and ... they regret that they were born here in India, that the breadwinners were their local, native women, that in the end it was difficult for them to understand their English brothers. Well - at one time Kipling experienced this for himself. In India, he was the Sahib Raddy, with whom the native servants wore like a written bag for his golden hair alone. His mother sent him to study in England, where, in a private British school, he was first whipped and then put in a corner. The boy got sick, he felt such a shock. In India, he could walk in the park and shout: “Out of the way, angry Ruddy is coming!” And here ?!

In Soviet times, Kipling was the “bard of British imperialism”, but if you think about it, he was a very clever and real patriot of his homeland, during the Anglo-Boer War he opened gyms and shooting clubs to prepare young Englishmen for his harsh military service. And it was just in the mouth of the officers of his poem Kipling put his vision of the problem of migrants: “The fathers carried their faith and labor to foreign lands. They submitted to him, but children are rightfully born here! ”

And today, the same problem arises here in Russia, and the problem is very acute. Some believe that migrants from the former republics of Central Asia are taking jobs away from Russians. Partly - yes, but this is only partly. Because the "aliens" are used in jobs that do not require high qualifications and, accordingly, low-paid. It would seem, well, they worked a little, got the money, some of them were returned back to the country's economy through illegal “giving” and extortion, and this seems to be even good. But the fact that it is good, it only seems that way!

At one time, the economy of the USSR rose to the workers of the GULAG. It was a cheap labor force that brought unprecedented wealth to the country - wood, ore, coal. They were not paid "northern", they did not build warm housing, they did not take oranges, but were fed with balanda, so the profit from their use reached hundreds of percent. No wonder the first serious crisis in our economy began precisely with the closure of the last GULAG camps. Instead of “slaves of conscience”, workers needed to be paid. And pay in full!

Today is about the same. The use of relatively cheap labor of migrants increases the rate of profit for employers, but not by increasing labor productivity and improving its quality, but solely by intensifying it. That is, it is as if, instead of a hydraulic hammer, we would beat scrap iron before smelting by means of a pig-iron woman, which would be lifted up by some people “from there” by the ropes.

That is, new technology in a number of industries and construction is not introduced, because migrants are invited for hard work. Finishing - yes, Russians work there. But in reality, we have more and more everything, as Mayakovsky wrote about it: “Black does the black work, white does the white work!” What is this racism? No - just the economy! In Spain, negros also work in the gardens, not the Spaniards themselves - I saw it with my own eyes. They sweep the streets in the resort villages too, and now the Spaniards clean storm sewers with the help of some clever car. But what will happen when those of the migrants who at least somehow take root here with us, the children begin to grow up? They have traditionally a lot of children. We can all see already many women walking in the streets of our cities in long dresses and embroidered trousers with wheelchairs, and there is one baby-baby in them, and some one or two more are traded next to them. By the way, in overpopulated India, which has already surpassed China in terms of population growth, there is only ... 2,47 child for one woman! Since in order to stabilize the population, it is necessary to have two children per family, it means that all this giant increase is accounted for only this small tail in 0,47! And now their women have this “tail” more than ours, therefore, children with a specific eye cut on the streets of our cities will have more and more time.

Again, there seems to be nothing wrong with that, but ... “by birth right here!” - this should not be forgotten, so in the end, they will tell you that they are Russians. Russians, whose mentality is such that they do not recognize the majority of Russian culture, do not know the Russian language, but ... they claim a better life than their parents! That is the problem, and every year it will be only sharper!

Today, the children of migrants in the same Moscow in those schools where there are more than 30% in their classes seriously affect the quality of education of Russian children. Teachers have no time to work with them according to the program, because the children of migrants do not speak Russian, and therefore half of what they are taught is not understood. The quality of education of the titular nation suffers, which means that more “black labor” will be needed, therefore, labor productivity will drop even more! But then, having somehow finished school, many of them - and why are we worse ?! - they will go to our universities and we will also have to teach them, because they pay, they are ready to pay for education, but they will not receive quality anyway, or we say, they will receive it, but not all.

In the United States, where, for example, some of my former students study, no one indulges them in poor knowledge of English: you don’t know the language - these are your problems, don’t learn. Since Soviet times, we have formed a very tolerant attitude towards foreign students, especially from countries "following the socialist path of development." Well, the student does not know the language well, and God bless him. Learn! The main thing is to pay for study. We are accustomed to “feed” the “fraternal peoples”, to help the “destitute”, seeing in this a manifestation of proletarian internationalism. In the end, the "farm ended", but the tolerance remains!

But now another problem has arisen: “generic tourism”. Yes, yes, do not laugh! Many women from the East in the last month of pregnancy come to us and give birth here. According to official data, in Moscow every fourth newborn is from Central Asia, in St. Petersburg every fifth. And many mummies are immediately refused, they get into orphanages, receive Russian citizenship, real estate - as well! So the increase in the birth rate, about which we talk so much, is by no means due to the Russians.

That is really going to Moscow to give birth to several hundred thousand women from Kyrgyzstan, Tajikistan and Uzbekistan per year. Is free! Because this is our law! And why not use it? We are clean, doctors are good! And the fact that their women with tuberculosis end up in wards with ours is the cost of "production." And again, the data of the Moscow government suggests that 5 billion rubles from the budget is spent on medical aid to migrants, including for childbirth. And what do we end up with? Fatherlessness from orphanages, which is not socially adapted, and is good ... well, what serious can it do, just do a dirty job and still ... reproduce!

That is, friendship is friendship, and you need to take money from these countries for obstetric aid and in this way fill the budget losses!

Because the real problem today on the planet Earth is ONLY ONE, but very serious and terrible. No, this is not a global warming, not a global cooling and not the notorious aliens from space, who have taken on our appearance and live among us! This is an uncontrolled increase in the birth rate of the population of the planet, which has already exceeded 7 billion people and everything is growing and growing, first of all, at the expense of some countries in Asia and Africa. And it may happen, after all, that someday we will have the last mug of fresh water and the last fuel canister “for three” and ... what kind of “brotherly help” and tolerance will we then remember? No, then we will remember the “law of the jungle” and we will not get away from this if measures are not taken today! Ahead of us is “The Age of Hunger and Murder” - as Ivan Efremov wrote about this in his prophetic novel “The Hour of the Bull!”

Ctrl Enter
Noticed a mistake Highlight text and press. Ctrl + Enter
We are
Father told"St. Petersburg" company
54 comments
Information
Dear reader, to leave comments on the publication, you must to register.