Europe faces a crisis of overpopulation with foreign military 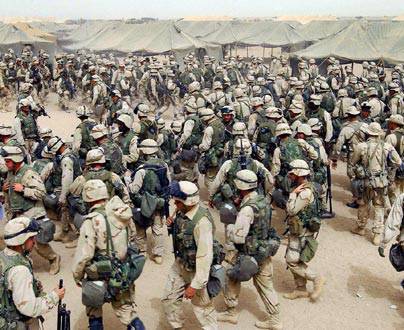 The United States continues to deploy large military contingents to Europe. During September, a total of about 3,5 thousand American troops from the 3 infantry division will arrive in the region and will be deployed in nine European countries on a rotational basis over the next three months. The US military will take part in numerous maneuvers designed, according to the official version, to increase the level of compatibility of the armed forces of the NATO countries, and, according to the unofficial one, to show "who is the master of the house."


It has been announced that about 1,5 thousand US military will take part in exercises in Bulgaria, Hungary, Latvia, Lithuania, Poland, Romania and Estonia as part of Operation Atlantic Resolve.

More 400 American soldiers will be involved in the teaching of Trident Juncture 2015 in Spain. In addition, more than one and a half thousand US troops will arrive in Germany and take part in the Combined Resolve V, a multinational maneuver.

Instead of finding a solution to their own problems, Europe, as always, relies on Washington, gradually becoming its shadow and blind executor. At the same time, European countries are also very initiative. On September 12, the Commander of the Armed Forces of Lithuania, Major General Jonas укаukas, announced that the Baltic countries had asked the leadership and member states of the Alliance to host an Allied forces contingent on a permanent basis. This statement was announced by Jukas following the meeting of the NATO Military Committee, held on Saturday in Istanbul. Despite the fact that such decisions are made at the political level, a positive response, most likely, will not take long. Yes, and migrants in Europe, the United States will fall in handy. In the event that the Russian Federation starts to accuse Europe of militarization, everything can easily be shoved at the ungrounded refugees and the need to involve the military in order to establish the rule of law. And the military is “extremely necessary” to train, and for this the wise American instructors will be especially in demand.

As shows история, a mixture of internal political problems and foreign policy pressure is not the best catalyst for making informed decisions. The domination of foreign military will not solve problems, but will become an additional annoying factor that will aggravate internal political discontent and further complicate the situation in the region. Ignoring the well-known truth that by increasing military activity it is impossible to reduce the military danger, Europe, with the active participation of the United States, continues to increase the intensity and number of maneuvers on its territory.

Against this background, the general military rush is becoming increasingly doubtful the speedy resolution of the problem of illegal migration, the solution of which requires immediate action, but not at all of a military nature.

Ctrl Enter
Noticed oshЫbku Highlight text and press. Ctrl + Enter
We are
As NATO instructors in the territory of a military base in Estonia, trained Ukrainian nationalistsHow Latvia pragmatically and constructively cooperates with Russia
20 comments
Information
Dear reader, to leave comments on the publication, you must to register.