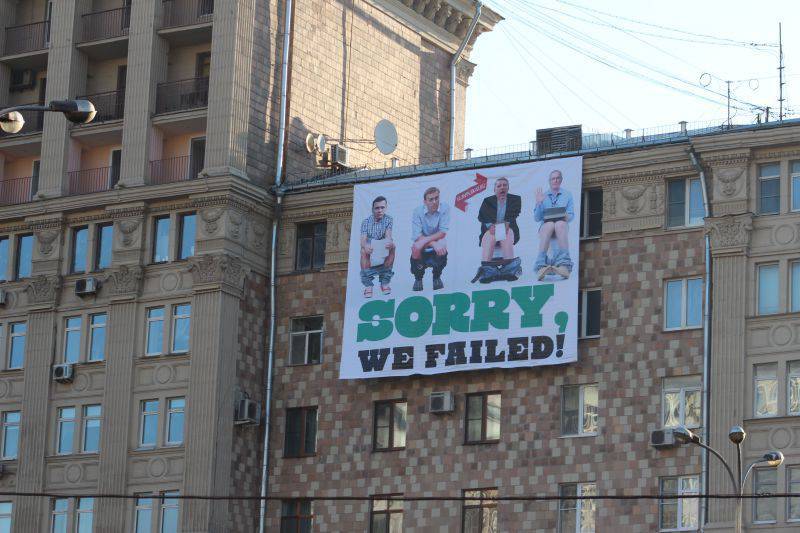 “Democratic reincarnations” did not happen after the single election day in Russia (September 13) ... In a single Kostroma region, the lists of candidate parties to local authorities seemed to be the most representative, the so-called Democratic coalition did not even get out of the 2,5% of the vote. At the same time, the Democratic Coalition was represented by RPR-PARNAS - the “Party of People’s Justice”. And whether this party is really insanely far from the people, or whether its “justice” is somewhat specific ... - in general, Kostromichi pointed to the real rating of those who call themselves “Russian democrats”: 2,21% - and a magical flight past Kostroma legislative power - with a whistle.

Naturally, all voted for other political forces, ardent supporters of the "democrats" were once again declared the "aggressive majority", but this did not instill in the "democrats" the new forces. For the first time ever history participation of political movements like PARNAS, the party did not dispute the election results, saying that there were no violations that could affect the result in 2,21% ...

Moreover, supporters of the Democratic coalition, who intended to go to a rally on Monday 14 of September at a rally in Moscow with the aim of “labeling” the CEC and Vladimir Churov personally, refused the rally. According to the director of the so-called “anti-corruption fund,” Mr. Gubanov, the rally was not held for “purely technical reasons”. They referred to the fact that, they say, there will be another rally scheduled for September 20, and that there, they say, everything is declared and will be given to this CEC, although the demochod was originally called “Over removability of power”. Does the unification of the rally dedicated to the criticism of the CEC, with the rally "For the turnover of power" mean that the Democratic coalition is going to call on the CEC to "abstract" from the results of popular will and "sanction" the change of power, even if the majority of citizens, as the elections showed, support that power, which is at the moment? ..

The cancellation of the rally of September 14 and the lack of desire of the Democratic coalition to file protest claims with the courts can be understood ... The fact is that the main admirers of their talent - representatives of overseas "elites" did not make any gestures on the fiasco of the "main Russian democrats". ". The US ambassador to Russia John Tefft is silent, the spokesman for the American diplomatic mission, Will Stevens is silent ... There is not a single line that the Kremlin’s clawed strangled Parnassians, that “the head of the Central Election Commission Churov hangs over the transparent electoral system”, etc. And there is not a single line not only on the official website of the US Embassy in the Russian Federation, but even on the embassy Twitter and Facebook. But the “democrats” who were eager to win even in a single region were so expecting that at least one cookie would fall from above, or at least that Ambassador Tefft would fraternally support them, lowering the little hands, but would support ... .

However, one of the most ideological representatives of the Democratic Coalition is trying to preserve a democratic face and take the will into a fist - a man who ate a dog in the fight against corruption, which he himself ended up in court forms on the facts of involvement in corruption-fraud crimes, Alexey Navalny, a forester. However, attempts to preserve the democrat fit only in the Internet moaning that, they say, if "we were given" not Kostroma, but some other subject of the federation, we would understand, broke all button accordions after the announcement of the victorious election results. Like, we are not - the area is ... They will register, you know, do not understand where, and like what you like, and spin ...

In general, the Kostroma region for the “democrats”, as it turns out, turned out to be “too complicated” ... In many ways, a unique “political” statement from a person who has plans to climb one of the high, no less than federal posts, isn't it?

But if it was “difficult” to go to the legislative assembly of the Kostroma region, what kind of “all-Russian” political weight and what support does the party say? .. The past elections showed an obvious fact in all their glory: if the “democrats” did not timely “cookies” were brought up, then their result in the elections is within the statistical error ... If the forces whose political platform is based on statements like “the Ukrainian revolution of dignity is the peak of democracy”, “we will abandon the Crimea Since it’s beautiful, the sanctions against Russia will be lifted, ”“ high defense spending is nonsense and lack of understanding that Russia has only friends around, ”there is no external patronage, then all their efforts are in vain.

Another question: what happened to the "friends" from the US embassy and their direct superiors from the US State Department, that they did not comment on the results of those who seemed to rely on in recent years? The answer to this question can be quite simple. The fact is that in the present conditions it is too small for the United States to initiate frank financial and political support of the same Demo Coalition in a single Kostroma region. After all, the Democratic Coalition in Russia is not a “moderate Syrian opposition”, which, if anything, can quickly replace the civilian suit with NATO camouflage, “gut” a box of grenade launchers and administer democracy with Washington-inspiring efficiency. Today the democratic coalition is not even a force with the presence of attack aircraft, similar to the attack aircraft Yarosh in Ukraine. For the most part, this is a “dissenting” office plankton, which does not arouse much enthusiasm in the United States, because not a single revolution has ever been done by the forces of an “office plankton” and “likes” on Facebook.

That is why from the US Embassy there is no one - They say that we saw your result without our help ... We understood and forgive ... Wait for the moment, build up your muscles.

But already by the beginning of the candidate campaign before the elections to the State Duma of the Russian Federation, which will take place exactly a year later, the diplomatic mission of the “most friendly state” is unlikely to remain as quiet and motionless. It is quite possible that somewhere already new forms are being cast for “cookies”, which at one time were used to feed the bloody coup d'etat in the neighboring state. Proceeding from all the latest events, well, they are not ready to give up using their manuals in Washington (time after time, time after time), and are not ready to expect that “they will achieve everything” by sanctions ...

Although in 2016 the elections are already in the USA, and for this country the elections are the main show of the four-year anniversary, during which the support of the controlled puppet theater abroad fades into the background. So, the "orchestra of democrats" of Russia, apparently, is translated by the "conductor" into a long waiting mode ...

We are in Yandex Zen
Democratic coalition goes to power again with figs in your pocket
Artillery of the Korean People’s Army. Part of 3. Reactive systems
42 comments
Information
Dear reader, to leave comments on the publication, you must to register.