17 September 2015
58
How in the past did the armies of different countries of the world come into service Tanks? In some countries they were invented and created independently from beginning to end. Some countries bought other people's developments, but put, for example, their own cannon. And for some countries it was enough to “spy” what a foreign tank looks like in order to build its own. And there is nothing shameful or shameful about this! For this reason, intelligence exists in order to deliver the necessary information to the country on time, and thereby save it strength and money! 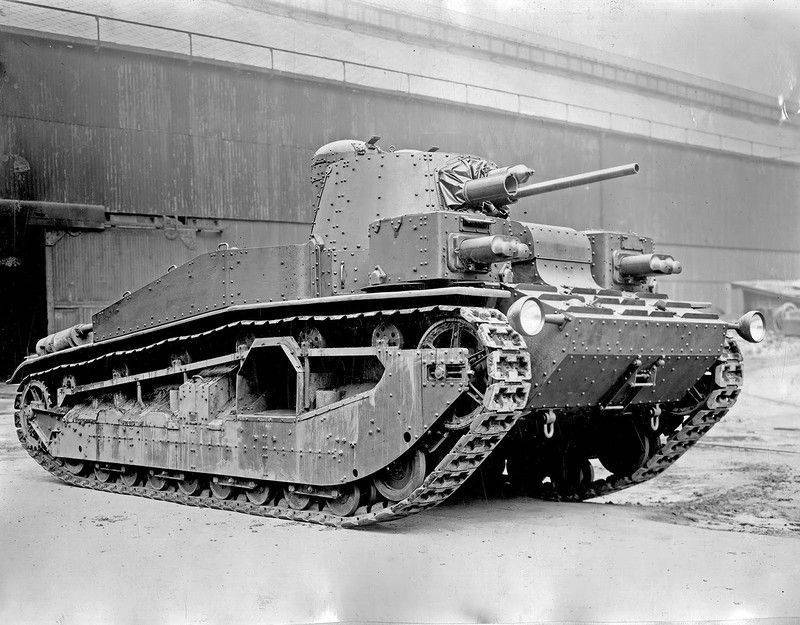 The first version of the tank "Vikkers 16 t."

For example, in the USSR, this is how three-turreted T-28 tanks appeared. Accidentally circumstances were formed, because it could well be quite different. But the fact is that being in England with the commander Khalepsky, the head of the tank engineering design bureau S. Ginzburg once saw a three-tower tank in motion on an English training ground and, quite naturally, became interested and began to ask about it the English. But those, referring to the fact that it should be adopted by the British army, categorically refused to discuss the tank itself, and the possibility of selling it in the USSR, and besides, its price was very high. So the Vickers 16-ton tank (the most modern British tank of that time!) Did not get to the Khalepsky commission that time. However, during his second business trip to England, since we still bought quite a lot of Vickers cars, Ginzburg tried to “talk” everyone he could and as a result got quite a lot of valuable information, which is clear from the following his letters. 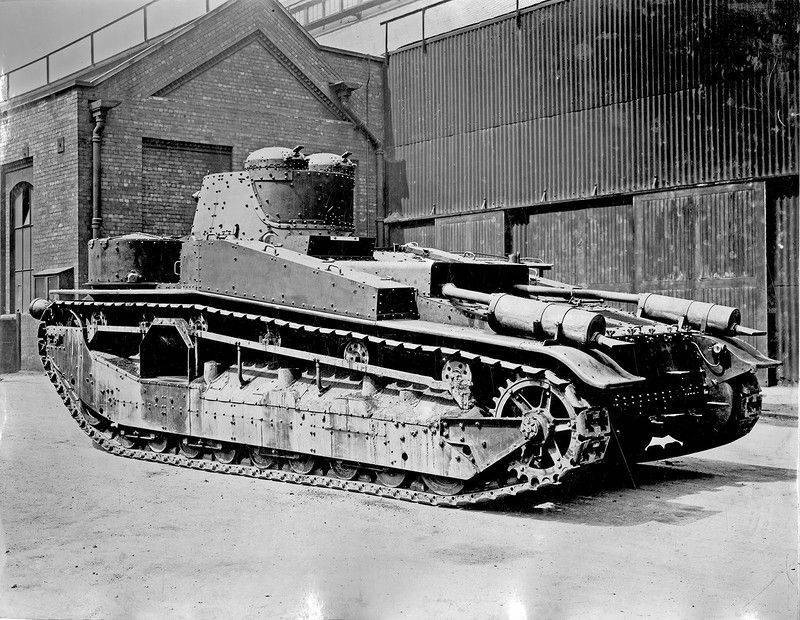 The first version of the tank "Vikkers 16 t." Back view.

"The CHAIRMAN of the Scientific-Technical Committee UMM (Scientific and Technical Committee of the Office of Motorization and Mechanization - approx. V.Sh.)
As a result of my conversations with English instructors, I was the last to receive the following information about the 16-ton Vickers tank:
1. The tank has already been tested and recognized as the best example of English tanks.
2. The overall dimensions of the tank are approximately equal to those of the 12-ti Vickers ton II tank.
3. Maximum speed 35 KLM (so in the text - approx. Author.) Per hour.
4. Reservations: tower and vertical sheets of the combat compartment 17-18 mm.
5. Armament: in the central turret - one “big” in the side front turrets - on the 1 machine gun. Total one gun and 2 machine gun.
6. Team: 2 officer / or one /, 2 gunner, 2 machine gunner, 1 driver.
7. The air-cooling motor in the 180 HP has a start from an inertial starter and from an electric starter (the latter is a spare one). Start is made from inside the tank. Accessibility to the motor is good.
8. The suspension on each side has 7 candles with springs. Each candle relies on one of its own rink. The rollers are about a six-ton ​​device (meaning “Vickers 6-ton” - the future Soviet T-26 - author's note.) The suspension tells the tank’s stability not worse than a six-ton ​​tank.
9. Rear wheel drive.
10. Caterpillar fine hinged with removable screw-in spurs. Keeping and guiding a caterpillar is like a six-ton ​​tank.
11. The central tower has an optical sight and optical observation.
12. The driver’s seat in the middle in the middle provides good visibility for driving.
13. Transmission - gearbox and side clutches. The box of speeds of two types: original / patented / and normal type.
14. The range is the same as that of a six-ton ​​tank.
15. NOTE: The information was received only after the translator stated that we had already bought this tank and are awaiting its receipt.
Information was given: engineer mechanic-mechanic, senior master and the driver who conducted the tests of this machine. Information about the car is still classified.
16. APPENDIX: scheme of the plan and side view of the tank.
CONCLUSION: Joining the conclusion of the above instructors that this vehicle is the best example of British tanks, I consider that this vehicle is of maximum interest to the Red Army as the best modern type of maneuverable medium tank.
As a consequence, the purchase of this machine is of invaluable interest. This machine will be released into the army units now or in the near future and, therefore, secrecy will be removed from it (as in the text - author’s note).
Beginning Test groups: / GINZBURG / " 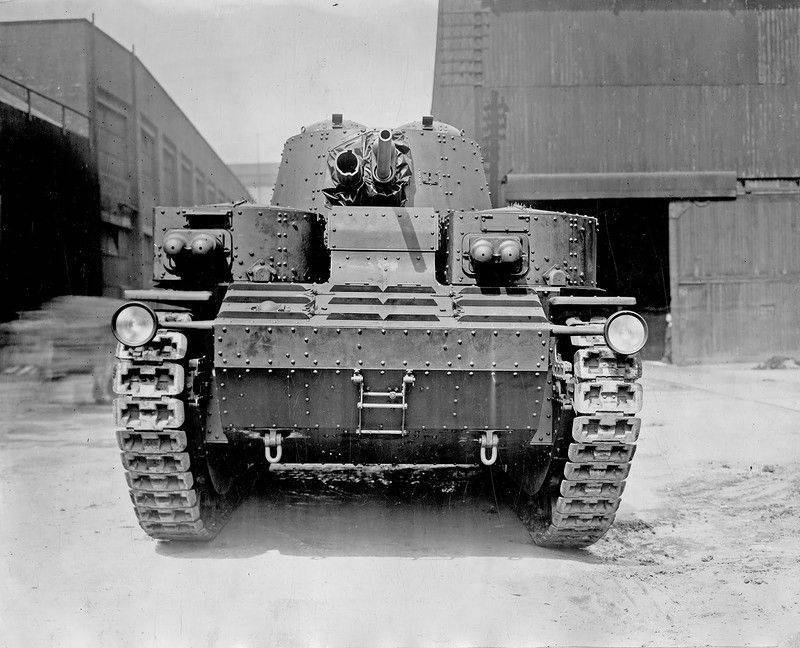 The first version of the tank "Vikkers 16 t." Front view.

So those who say are right: “a gossip is a godsend for a spy,” and another proverb is also true: “the forbidden fruit is sweet”! By the way, the “Vickers 16-ton” was not used by the British Army as a result, but the Red Army received the medium tank T-28 developed on the basis of its concept! 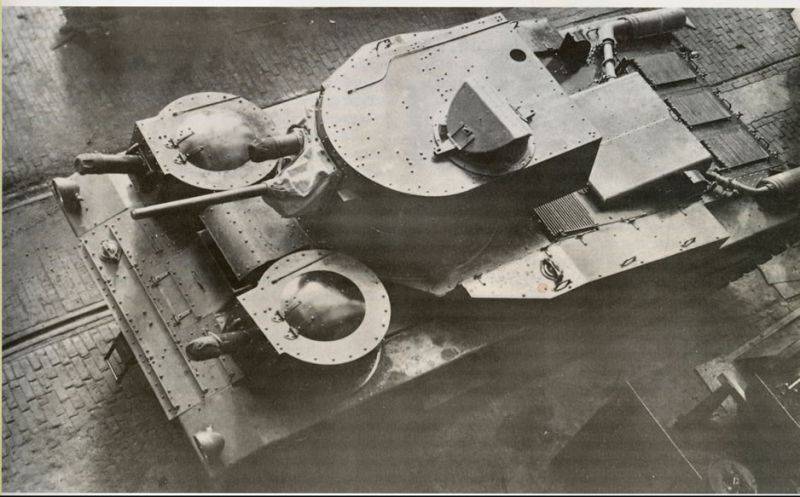 Top view of the tank. The hemispherical manhole covers on the machine-gun turrets and the commander's turret of the Bishop’s Miter are clearly visible.

Well, the Vickers 16 T itself did not turn out right away either, all of a sudden, and its fate was very revealing, just like the tanker Christie. Vickers began working on it in 1926. In this case, it was assumed that he would replace in the troops tanks Mk I and Mk II, adopted for service in 1924 - 1925. and showed themselves from the best side. The task was given to the company so that its creative potential could manifest itself to the maximum. The main requirements of the Military Department were reduced to the following requirements: in comparison with the predecessors, the armament of the tank was strengthened, but at the same time its mass should not be more than 15,5 tons. This would give the opportunity to throw it across the rivers with a standard army pontoon carrying capacity of 16 tons. 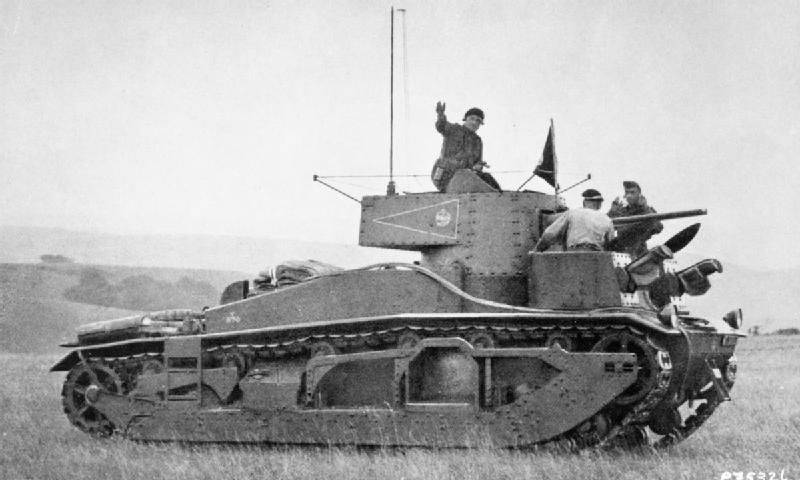 And the company turned around: two machine-gun turrets in front, one behind and a cannon turret in the center were to keep all the space around the tank under powerful shelling. But designated as A6, the tank was eventually rejected by the military: it did not fit the restrictions on weight. During the processing of the drawings, the number of towers was reduced to three, and in 1927, Vickers built two prototypes of the machine, designated A6EXNNUMX and A1X6. Outwardly, they were very similar and differed only in the type of transmission. The A2EX6 had a Armstrong-Siddley four-speed gearbox, and the A1EX6 had a Swiss Winterthur / SLM. The engine on both tanks used the same: X-NUMX-strong air-cooled Armstrong-Siddley V2 carburetor engine. The armament in the three towers was very powerful: in a large turret 180-mm cannon and 8-mm machine gun and two small towers with two 47-mm machine guns in each. Sparky machine guns doubled their rate of fire, and water radiators were booked. The crew consisted of six people. Reservations were, as before, clearly insufficient. Only 7,71 - 7,71 mm. The mass was 9 t because of what later these tanks just became widely known as the "Vickers" 14-ton. Tests of cars at the end of 16, at the Farnborough site, demonstrated good capabilities of the machine, in particular, that they can reach speeds up to 16 km / h, although their suspension, largely copied from the Mk I and Mk II tanks, was not too unsuccessful. In the year 1927 made the third copy of the tank - AXNUMHEZ. The number of machine guns on this machine was reduced to three (one in each turret) and a new six-speed planetary gearbox of the Wilson system was installed. In total, six such tanks were built, of which three were prototypes. Apparently, it was precisely the machines of the latest issues of Ginsburg that he saw, because nowhere does he write about twin machine guns, but how impressive is that ?! The cannon on the tank again stood the old - 40-mm rapid-fire QF 1928 pounder, with ammunition in 6 shells. For machine guns tank had 47 cartridges in tapes. The armor on the three serial machines in the front (the front of the hull and the turret) was increased to a thickness of one inch - 3 mm, but still this was not enough at the beginning of the 180s. The tank was not adopted by the British army, since it turned out to be not needed because of its redundancy. In the colonies he had nothing to do, and then the British did not intend to fight on the continent. 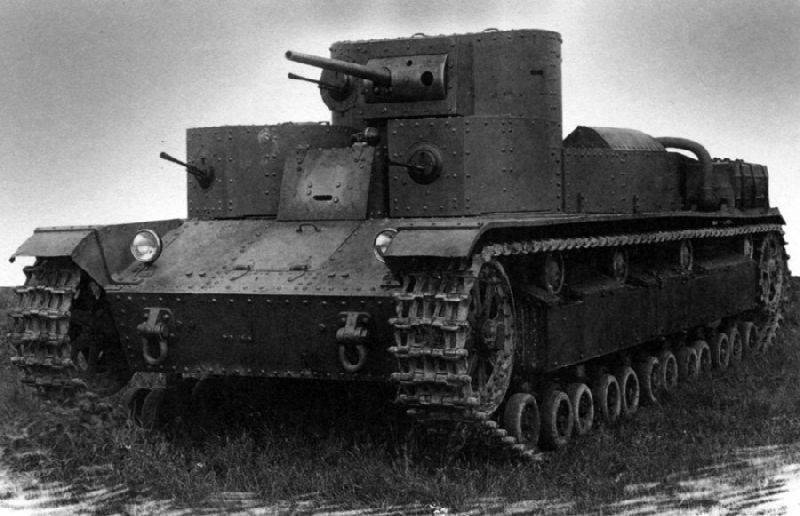 Well, in the USSR, at first, the experienced T-28 also had a 45-mm gun, but then it received an 76,2-mm gun and in this capacity showed itself from the best side and fought with the Germans up to the 1942 year, and near Leningrad to the 44- wow Well, after the 1939, the English tanks were scrapped. That is, like the Christie tank, this “Vickers” turned out to be more useful in another country than in its own, and Ginzburg is just brilliant, that he managed to “spot” him in time!

We are in Yandex Zen
Tank "Vikkers Medium" - if you really fight, then with comfort
Wunderwaffe for Pantservaffe. Description of the design of the tank "Mouse"
58 comments
Information
Dear reader, to leave comments on the publication, you must to register.