17 September 2015
29
In early August, Russia and France put an end to the sensational stories with the delivery of two amphibious ships of the type Mistral. After several months of negotiations, the parties found a common language and decided to terminate the contract signed at the beginning of 2011. In accordance with the new agreement, France maintains its position and does not transfer the ships to the customer due to disagreements over the Ukrainian crisis, and Russia, in turn, receives all the money paid earlier to the Mistral manufacturer.


Recall that the first of the two amphibious assault ships ordered by the French shipbuilders were to be handed over to Russia last fall. However, several months before the deadline, French President Francois Hollande said it was impossible to transfer ships due to the current difficult situation in the international arena. In the fall of 2015, the Russian military should have received a second ship, but its delivery has now been completely canceled.

Shortly after the appearance of the first information about the completion of the negotiations, it was announced that France had paid compensation to Russia for refusing to deliver two ships, but the exact amount was not reported. The amount that had to be paid to the French side, became known only in early September. According to foreign and domestic media, the contract gap cost France in 949 754 859 euros. At the same time, in some domestic editions other figures were cited. Thus, the Kommersant publication, citing unnamed sources, reported that Russia had already received compensation in the amount of 950 million euros for two ships and 67,5 million euros for their feed parts built in our country. 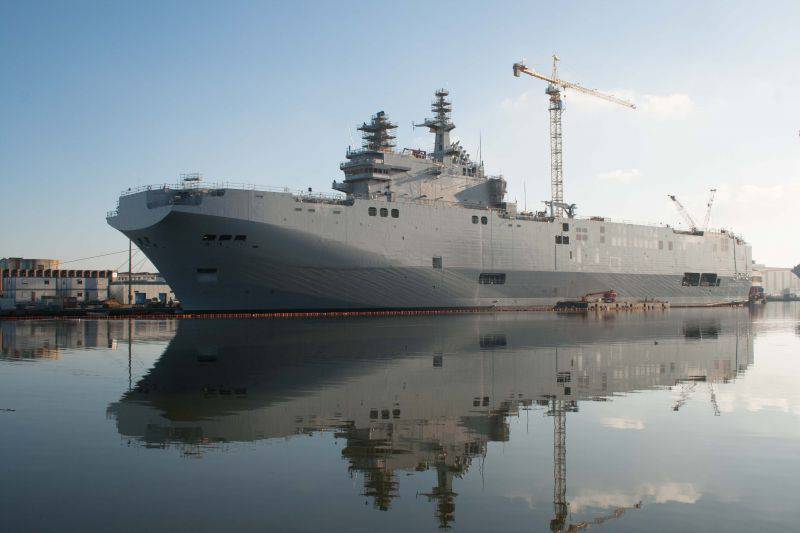 The landing ship "Sevastopol" in Saint-Nazaire. Photo of Wikimedia Commons

The press cites different figures, but the actual situation is most likely reflected in data on 949,75 million euros. According to reports, it is this amount that appears in the text of the agreement on the termination of the contract for the supply of ships, submitted for approval to the National Assembly of France. September 15 the lower house of the French parliament should review and approve the document. It should be noted that the contract has already been signed, and compensation for the ships has already been paid in full.

A few days after the information about the amount of compensation, data appeared on the further joint work of the two countries. In accordance with the new agreement, French shipbuilders will have to dismantle Russian-made equipment from two landing craft. According to media reports, dismantling work should begin in September. In addition, it was argued that the dismantling would be carried out by French specialists under the supervision of Russian colleagues.

According to the updated project, landing ships for Russia were to receive a number of Russian-made equipment. It was supposed to use Russian communications and control systems, weapons, etc. As far as we know, most of these systems were transferred to a contracting company that installed them on ships. After the transfer of Russia, the two ships were supposed to be in the dock for the installation of the remaining weapons. For obvious reasons, this stage of the project will not be implemented.

In the near future, two ships must lose part of the onboard equipment, which the French side is obliged to return to Russia. According to some reports, the total cost of this equipment is estimated at about 50 million euros. With certain reservations, this amount can be added to the principal compensation when calculating total losses in France.

Official information on the list of systems that will be dismantled from two ships in the near future is not yet available. Nevertheless, attempts are being made to define this list and draw some conclusions. For example, the September release of FlotProm 8 published material “Mistral Shards”: which Russian equipment France will return, in which it tried to determine which ship systems would be removed from the ships, packed and sent to Russian warehouses.

According to the Flotprom, ships of the Mistral type were to receive 67P radar recognition equipment manufactured by the Kazan Electrotechnical Plant. It is noted that this system, designed to determine nationality aviation equipment or ships, suitable for installation on boats and ships of various projects.

The tasks of the combat control of the ship and the tactical formation on the Mistral were to be carried out by the Sigma-E combat information management system. This equipment, produced by NPO Mars, can be installed on ships of various projects and ranks, including landing ships of French origin.

To detect and attack targets, new ships were to use the optical-electronic and thermal imaging complex MTK-201МЭ. Such equipment is used on domestic XVUMX corvettes and allows you to monitor the situation in a radius of up to 20380 km.

FlotProm also lists the communications equipment supplied to France for installation on the Mistral. So, for the satellite radio communication, the P-793-M “Trailer-M” station was offered, with the help of which the ships could communicate with other ships and the coast. In addition, landing ships were supposed to carry a second satellite communications station, the P-794-1 "Centaurus-HM1". A super-long-range radio receiver P-774СД1.1 and an 16 channel receiver P-693 were also purchased.

It was planned to include Russian-made anti-aircraft artillery and rocket systems in the armament complex of the two ships. In accordance with the contract for the construction and supply of ships, the French contractor had to prepare places for the installation of weapons. Proper installation weapons and some auxiliary systems were supposed to be implemented at Russian enterprises after the transfer of ships. Due to the disruption of delivery, the ships never received weapons. According to reports, for self-defense, two Mistral amphibious assault ships were supposed to use AK-630 anti-aircraft installations and the Bending 3М47 missile systems.

At present, French specialists must start preparing for the dismantling of systems of Russian production to be returned. France Presse, citing its sources, reports that it will take several months to dismantle Russian equipment — these works will be completed only in January of next year.

Literally the other day it became known that in this situation the shipbuilding company DCNS, which was the main contractor under the Russian-French contract, will receive. French Secretary General for Defense and Security, Louis Gautier, during his speech in parliament, said that shipbuilders will receive insurance payments in the amount of 1,1 billion euros. This amount includes the cost of the ships themselves, as well as the cost of maintaining them, pending a decision on their future fate. At the same time, insurance payments do not take into account the costs of dismantling the systems returned to Russia.

At the moment, the further fate of the two landing ships built for Russia is the subject of controversy and discussion. According to various media sources, several countries are now showing interest in French ships and may even acquire them. The list of potential buyers now includes both expected and unexpected positions.

In early September, the publication Defense News added the United Arab Emirates to the list of potential buyers. According to the unnamed government representative of the UAE, who was quoted by the publication, his country is interested in buying one of the ready landing ships.

A little later, French journalists from Intelligence Online reviewed several versions of the possible sale of two ships and concluded that the best option is to transfer equipment to Egypt. However, the official Cairo can not allocate the necessary funding. In this regard, the contract may be paid by Saudi Arabia, which has already ordered a certain amount of military equipment for the Egyptian military at its own expense. In this case, the French edition mentions some negotiations in Riyadh. Perhaps French and Arabian officials have already begun to discuss a possible contract.

It should be noted that in the press of different countries other "candidates" of buyers of the built ships are now being discussed. According to various publications, two Mistral can replenish the military fleets of India, Vietnam, Saudi Arabia, Brazil, etc. However, so far none of the countries mentioned in the context of the latter News and rumors, did not officially express readiness to acquire French ships.

In this situation, Russia, apparently, does not want to lose its benefits and therefore intends to make lucrative offers. So, according to the Kommersant newspaper, the Russian side can offer the Ka-52K deck helicopters to a potential Mistral buyer. This modification of the "land" attack helicopter was developed specifically for basing on the landing craft, and now its further fate was in doubt. At the same time, the Russian export offer may be beneficial for potential customers, since the Ka-52K helicopters were developed for a specific type of ships and adapted to work on them.

Against the background of discussions on the possible sale of ships to third countries in the foreign press, new rumors have emerged concerning the future role of Russia in this story. According to some information, the Russian side can refuse the requirement to return the equipment of its own production. Such a condition, according to some publications, concerns the possible sale of ships to Egypt and India. In other words, if two Mistrals are sold to a friendly Russian state, then it will not insist on returning its systems.

As we can see, despite the appearance of an agreement annulling the Russian-French contract for the supply of two amphibious ships, and the payment of compensation, the situation continues to raise a lot of questions. The main one is the further fate of the two built ships. By the end of the year, two Mistrals should lose a number of Russian-made systems, after which French shipbuilders will be able to begin preparing ships for further sale.

Who exactly would express the desire to acquire two ships built for Russia is not completely clear. There are various assumptions in the domestic and foreign press, but all of them, apparently, do not fully correspond to the real state of affairs. In the export fate of the landing ships, at the moment, only one fact is precisely known - they will not be handed over to the original customer. The new buyer, in turn, has not yet been determined.

In this situation, you can only make predictions and try to predict the further development of the fate of two ships of the type Mistral. In addition, you should follow the news. What exactly will happen to the ships in the future - time will tell.