Russian Embassy in Ukraine. Getting out of protracted informational hibernation?


However, it is not at all about “in” and “on” in the presented material. The fact is that the Russian diplomatic mission under the leadership of the “invisible man” Mikhail Zurabov, who recently precisely because of Mr. Zurabov and learned what endless waves of criticism are, decided to somewhat intensify their activities. In the real world of any noticeable activation (in the light of the events already taking place) did not happen, but in the virtual world certain steps of the Russian diplomatic mission are worth noting. This is about the page “Pages stories”, Which highlights the topics that have recently become very resonant in connection with, to put it mildly, original approaches to the interpretation of history by the current authorities as“ independent ”.

If, at the “maydannoe”, “maydannoe” and earlier “postmaydannoe” time, Russian diplomats working in Ukraine clearly looked through the fingers at the actions of the Kiev “elites” who declared the so-called famine, “heroism” of the OUN-UPA, repressions against representatives only of the Ukrainian people, now on the embassy site was born that which should have been born, as they say, the day before yesterday. 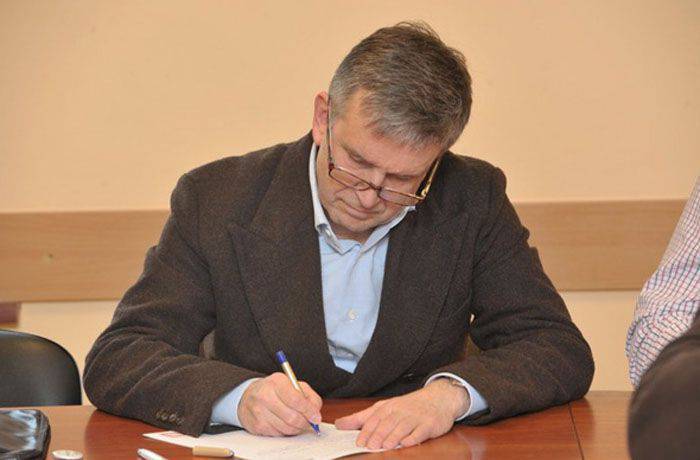 One of the microsections, which obviously has a rich potential for replenishment, is called “Historical fakes”. By and large, almost every statement of Ukrainian politicians regarding their historical interpretations can be published in it. From the "ukrohrestomaticheskih" "ancient Ukrainians" to Yatsenyuk pearls about the release of prisoners of Auschwitz by the fighters of the Ukrainian army. However, in the “Historical fakes” section, only one material devoted to fakes has been published - the lie that residents of Poltava, Vinnitsa, Rivne and other regions “hostilely” met Red Army soldiers during the Great Patriotic War during the liberation from Nazi occupation.

From the preface to the material entitled on the website of the Russian Embassy in Ukraine, as “Stubborn Lies”:

For many years now, it has been walking in print media and on the Internet the text of the Order No. 0078 / 42 from 22 in June 1944, signed by G. Zhukov and L. Beria. The meaning of the order is that Ukrainians, “especially in Kiev, Poltava, Vinnytsia, Rivne and other regions,” hostilely meet the Red Army, sabotage the restoration of collective farms, “disrupt the supply of the Red Army”, and even organize “green” gangs attacking on the Red Army.

For this reason, G.Zhukov and L.Berya are ordered to organize the expulsion "to the remote areas of the USSR all Ukrainians who lived under the rule of the German occupiers." In practice, this means ALL Ukrainians.

Attention is drawn to the fact that in order to refute this ukrofeyka, the Russian embassy has resorted (according to a very effective tradition today) to the author's investigations of bloggers. In this case, the Russian diplomatic mission is based on blog data. "Galician Tales", the author of which easily exposes the fake about the existence of an “exile order against Ukrainians” from 1944.

The material provides information that prompted the author to fake the spread of Order No. 0078 / 42 from 22 in June 1944 of the year distributed in the network. Here is this information (full text - here):

To combat the anti-Soviet gangs to transfer 12 and 25 punitive divisions of the NKVD.

The author writes that in 1944, the divisions of the NKVD, by definition, could not be called punitive, and this term was used solely as a definition of the actions of the units of the Nazis (SS).

From the disclosures published on the website of the Russian Embassy in Ukraine:

A closer reading reveals other suspicious moments. For example, Zhukov here is designated as “Deputy. People's Commissar of Defense, ”while he was First Deputy NPO (who doesn’t understand the difference, let him call the Prime Minister simply“ Minister ”).
Under all the orders of the NPOs of the last stages of the war, the texts of which can be found on the Web, Zhukov titled: "First Deputy People's Commissar of Defense of the USSR Marshal of the Soviet Union ZHUKOV." The only exception is our order.
The order was signed by two commissars, and in the text - “I order”. Why is the copy assured by Colonel (Fedorov) (by the way, why "P", not "p", and what is this strange construction "Colonel (Fedorov))", but to which of the two commissariats does this "Colonel (Fedorov)" belong, not specified?
Are they rather strange for a Russian-language document, and an extremely high-level document, like “hostilely resisting to perform” or “to prevent one from hiding and not letting his family know”? In short, even the actual text itself raises many questions.

The verdict of the author exposing fake:
Dr. Goebbels is dead, but his cause lives on. Successors, alas, enough.

Just yesterday, it seemed that the Russian embassy in Ukraine could not publish on the pages of its official website anything that might even cause a bit of anger on the part of the “partners”. But it passed ... Mr. Zurabov nevertheless decided ... And, as they say, better late than never ...

Another important publication concerns the revelation of the fake fashionable in Ukraine about the “famine” - the actions of the Soviet government, which allegedly deliberately starved only Ukrainians with hunger, while the “Muscovites curts” and all the other inhabitants of the Land of Soviets ate themselves over pineapples and grouse ... The website of the Russian diplomatic mission in Kiev publishes an impressive list of documents on the food situation in the country in 1930-1934. In the list of archival materials - GARF, RGAE, RGASPI, Central Archive of the FSB of Russia.

Here are a few excerpts and titles of archival documents published to expose the fake about the “induced famine” in the Ukrainian SSR and that supposedly no one else anywhere in the USSR went hungry in 30-s.

Resolution of the Council of People's Commissars of the USSR on the return of corn and wheat from the ports and on the additional purchase of grain for Ukraine in Persia and the Far East.
3 May 1932 city

The resolution of the Politburo "On seeds for Ukraine."
March 27 1933

Decree of the Council of People's Commissars of the USSR on food aid and seed loan of the Dnipropetrovsk region.
April 27 1933 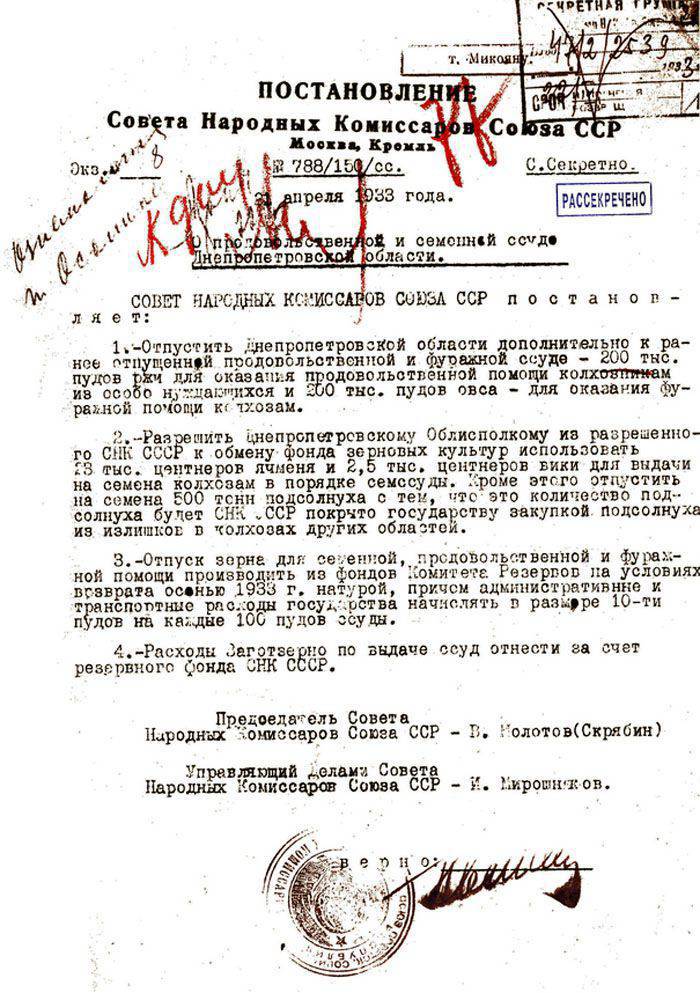 In total, there are two hundred documents on the work of the Soviet government on solving problems with food shortages in the Ukrainian SSR, as well as in the North Caucasus, Kazakhstan, Transbaikalia, the Crimea, and the Volga region.

It is difficult to imagine that the Ukrainian authorities suddenly decided to familiarize themselves with the archival data, but you don’t hide the truth. Ukrainian authorities will not want to get acquainted - sooner or later, ordinary Ukrainians, who have been trying to hang noodles over the last years about the fact that the USSR was not a mass hunger, namely “famine SEA” - and exclusively “against the Ukrainians”, will familiarize themselves with the materials. ...

And one more of the sections, with which many in Ukraine will not be superfluous to read. These are archival documents about the activities of the “heroic” Bandera - OUN-UPA militants.

Here are just a few examples of dozens of documentaries - published on the website of the Russian Embassy in Ukraine, examples of clearly peculiar "heroism" of the OUN-UPA:

Agent report from the area of ​​the city of Rivne

From the area of ​​the mountains. Exactly Received 3 USH.43g.
The Ukrainian SSR

“Agent of the“ NUD ”group, who returned from the mountains. Vladimir-Volynsk, reported that on July 18 of this year. witnessed the mass extermination of Ukrainian nationalists, Bandera Polish population living in the mountains. Vladimir-Volynsk.
During worship in the churches of Bandera, 11 priests were killed and, before 2000, Poles were killed on the streets of the city.
The German garrison, the police and the Cossacks in the number of 600 people did not take any measures against the massacre of the Poles, and only after the massacre the German command posted an announcement calling on the Poles to join the gendarmerie to fight Bandera.
Many Poles, fearing reprisals, went to the service of the Germans.

From the material of the interrogation of Ivan Kutkovets

Question: Specify what is the difference in the program provisions between “Melnik” and “Bandera”?
Answer: ... "Melnikov" and "Bandera" in the political direction are pro-German orientation. "Bandera" are representatives of the new formation of Ukrainian nationalists, based on the principles of an extremely chauvinistic terrorist fascist dictatorship. (...) Having lost its authority even among the nationalist-minded groups of the population, the “Bandera’s” are trying to retain their influence among the masses of the Ukrainian people by terrorizing it.

In the materials of the Security Police and the SD in Galicia, which we discovered after the Germans were expelled as occupiers in the former SD building of the mountains. Lvov found a number of top-secret documents of the Security Police and the SD on their negotiations and joint activities with the OUN-UPA in the territory of the western regions of Ukraine in the fight against the Red Army and Soviet power.

The first page of the act telling about the atrocities against the Jewish population of the town of Sambor of the Drohobych region with the active participation of the OUN-UPA (this and other documents were declassified in 2008 and published on the website of the Russian Embassy in Ukraine). 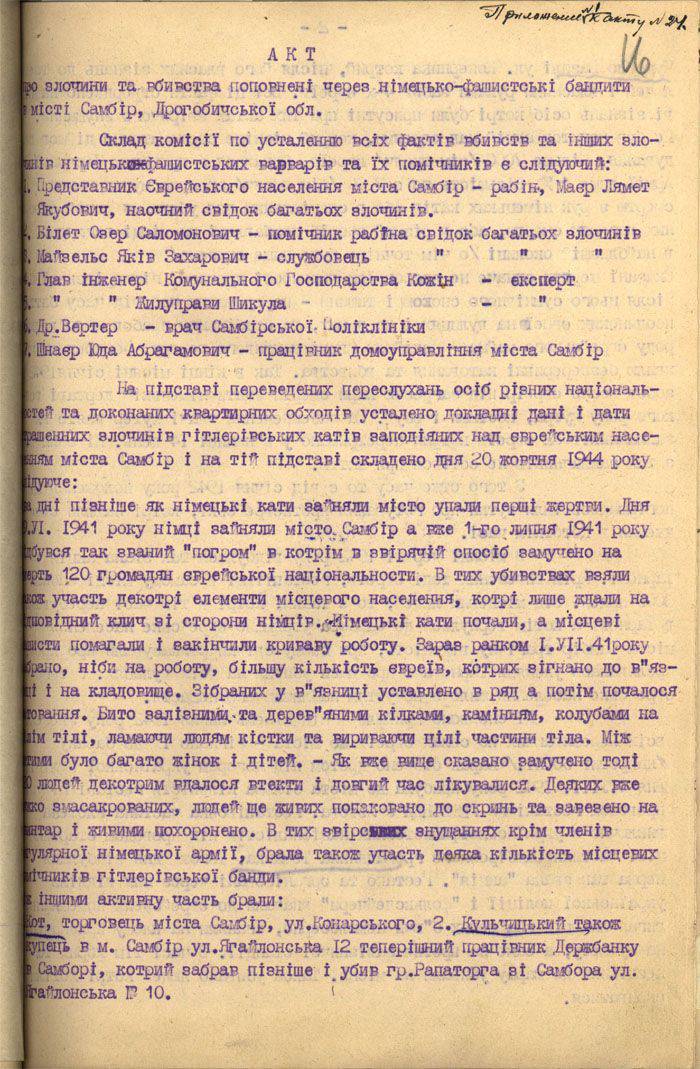 Now, if all this is still earlier and more sustainable ... Perhaps, the Maidan ghoul would have less chance? BUT?..

Ctrl Enter
Noticed oshЫbku Highlight text and press. Ctrl + Enter
We are
Results of the week. “We can expect everything from these bees”Results of the week. “To sell something unnecessary, you must first buy something unnecessary, but we have no money!”
101 comment
Information
Dear reader, to leave comments on the publication, you must to register.