15 September 2015
46
In late August, namely 31 numbers, President Poroshenko took a classic position for Ukraine: he sat down on two chairs at once, a pro-Ukrainian Bandera and a certain “purely pro-Ukrainian”, something definite is difficult to say about him, but Poroshenko himself embodies him. Today he is the most pro-Ukrainian in his speeches, but at the same time he has entered into a confrontation with the outspoken Nazis from Freedom, the Right Sector and the Lyashko Party. And he made a political alliance with the former regionals, the oligarchic Opposition bloc, during the voting on amendments to the Constitution on the last day of August. 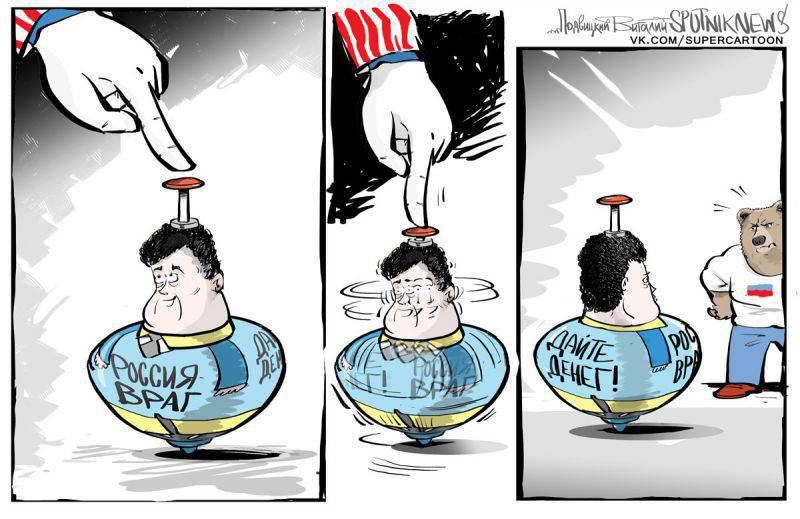 On the one hand, Poroshenko declared demobilization, and this speaks in favor of continuing the truce in the Donbass that Kiev refuses to attack on Donetsk and Lugansk. True, he immediately speaks of a "march on Moscow," he talks about the operation to implement the Minsk Agreements (later justified, they say, incorrectly translated from English), makes other absurd anti-Russian statements, it seems, to outdo the most notorious Nazis in "patriotism". And knock out, in this way, their propaganda ground from under their feet.

In fact, we see that the August execution of Poroshenko in Berlin led to a quick cessation of the shelling of Donbass, and this indirectly indicates that America has ceded Ukraine to Europe. Therefore, the junta's artillery preparation in August did not result in a war, there were no major acts of sabotage — they were no longer needed after the abolition of the general offensive of Kiev on the Donbass. The arguments of a more peaceful Europe turned out to be convincing, most likely for Washington, while Kiev simply obeyed.

The proof of America’s retreat from Ukraine is the hysteria of its brutal appointee of former Georgian President Saakashvili. He cannot hold back his emotions, and maybe, he remembers how America wrote off himself in Georgia. It is known that Saakashvili connects Poroshenko with friendship from his student days, thanks to this friendship and a short “bench” of trusted politicians for Poroshenko (plus a “request” from the State Department) he received a governor’s post in Odessa and great influence in the country.

However, the recent statements by Saakashvili set up Poroshenko himself, since they are generally offensive to Ukraine, which his student friend compared to African Gabon. Moreover, he manages to combine the bad things about Ukraine with conceptual statements about a "parallel government" in Ukraine, hinting at a certain conspiracy of oligarchs. Saakashvili clearly felt uncomfortable, and is torn between the American authorities and Poroshenko. He kind of gives Poroshenko a reason to dismiss himself in order to get out of the game, which is becoming increasingly dangerous for him.

All these statements by Saakashvili contradict Poroshenko’s “pro-Ukrainian” position and speak of a conflict between them. But only Saakashvili’s political attacks on Yatsenyuk and Kolomoisky are explained rationally: Washington’s dissatisfaction with Poroshenko’s refusal from the policy of war is hiding behind them, as they punish Pyotr Alekseevich for his August deflection in front of Europe. Washington does not touch Poroshenko himself, although Radio Liberty, known for its proximity to the United States behind the scenes, is already exposing the "corrupt billionaire Poroshenko."

In fact, Saakashvili Poroshenko incites the first to attack the far right. In Odessa, the police actually suppresses the performances of Bandera attack aircraft, and even arrested the two leaders of Euromaidan. A statement on the repression against the Nazi-patriots was made by Yarosh and called on his sister cities to unite and oppose the Kiev authorities. This Saakashvili performs the last task of Washington in Ukraine: if it was not possible to provoke a war with Russia, and in Transnistria, then it remains to provoke internecine strife within the Kiev regime.

In this case, it is important how the roles of the “aggressor” and his “victim” are distributed, Saakashvili pushes Poroshenko on the role of “aggressor”, then the Nazi-patriots and Kolomoisky will act as the “victim”. However, as in the case of President Yanukovych, curators from the United States will stand behind the backs of both “chairs”, CIA agent Nalyvaychenko stands behind the back of Nazi-patriot, and the oligarch Kolomoisky found refuge in the United States in difficult times. The only difference: Poroshenko relies on Berlin, which is interested in the Ukrainian gas transit, that is, in stability in Ukraine.

Usually, the United States ends its unsuccessful “managed revolutions” with civil strife: Aboriginal people were allegedly unworthy of democracy, incapable of democracy - and this is the sad result ... And the US is washing its hands, as they did in Iraq, Libya, Afghanistan, and Ukraine is next.

The end of the “guided revolution” of the US State Department in Ukraine also confirms the decrease in the activity of its ambassador in Kiev, Jeffrey Payette. The last time he leaned out of his diplomatic burrow into public space in connection with the events in Mukachevo, when the attack on the Donbass was still on the agenda, and the conflict with the Nazi patriots was very out of place. However, a much more significant event - armed Maidan at the walls of the Rada 31 August, did without its diplomatic statements.

Europe estimated Poroshenko's prudent behavior at 500 million dollars, which is half of the amount required to pay Russian gas, which Kiev needs for stable gas transit in the winter. This money will go directly to the accounts of Gazprom (!), Bypassing Kiev, and by the end of September, Russian gas may begin to flow into the UGS of Ukraine. If nothing extraordinary happens at the UN General Assembly in New York, in Syria and in Europe already divided by migrants.

Poroshenko, it seems, sees the threat of provocation of civil strife in the country, and announced the possibility of imposing martial law, allegedly in the event of a worsening of the situation in the Donbas. However, in the Donbass, and so "ATO", but on the territory of the rest of Ukraine will then be "IN", which he threatens his Nazi patriots in the event of an attempt to arrange a new armed Maidan, for example, by the October elections.