US plans to divide Iraq and Syria into "pipeline states"

15 September 2015
32
The assertion that the grandiose redrawing of the map of the Middle East, which goes either under the flag of the “Arab Spring” or now under the flag of the struggle against the “Islamic State” (IG), has a distinct smell of oil and gas - is no exaggeration. Iraq and Syria play a special role in this geopolitical project of the West.


“Iraq’s dismemberment plan was developed quite a while ago,” even before the direct American occupation, and “the first step in its implementation was the introduction of“ no-fly zones ”into 1991, when Baghdad forced to withdraw their troops from Kurdistan and the South of the country, and the Iraqi Air Force planes that flew north of Tikrit and south of Naseria, were to be destroyed. " All the ongoing talk in Ankara and Washington on the creation of “no-fly zones” in Syria pursues the same goal — preparation for the dismemberment of this country.

Syria is a natural transit area for oil and gas from northern Iraq (Iraqi Kurdistan), from the Arabian Peninsula and from the Persian Gulf basin. Further developments here will directly affect the geography of international hydrocarbon flows. “The territory of Syria,” says the head of the Eurasian Energy Development Center, Mikhail Yermolovich, “kind of“ closes ”the sea area, where large gas reserves are expected. Plus, of course, oil and gas transit factor, also associated with the specifics of the location of the Syrian territory. The latter circumstance predetermined the important role of Syria in the system of transit port-oil pipeline systems in the region. ”

At the 27 conference in August in Moscow, the conference of the Committee for National Dialogue (CPR) of the Syrian government, it was noted that the militants of the Islamic State and the armed forces of the Syrian "secular" opposition had already seized some areas of pipeline transit in Syria. At the same time, Syria, at the beginning of the 70s, under the current president’s father, Hafez Asad, nationalized some of the pipelines to the Mediterranean ports of Turkey, Lebanon, Israel and her own, as well as the associated terminals located on its territory. The main owner of the oil and gas arteries throughout their length (with the exception of Syria) is Saudi Arabia.

In the Syrian pipeline transit regions, “so-called independent administrations are now being created, in fact subordinate to the countries sponsoring the war in our country,” said Ammar Morhazh, an expert of the CPV on foreign trade and transport policy, in an interview with the author of the article. “The basis of such projects, the expert believes, is the strategic capabilities of the Syrian pipeline and port systems for the delivery of hydrocarbons from Iraq and the Arabian Peninsula to Turkey and Europe. The network of Trans-Syrian pipelines has been and remains a target of external forces. ” 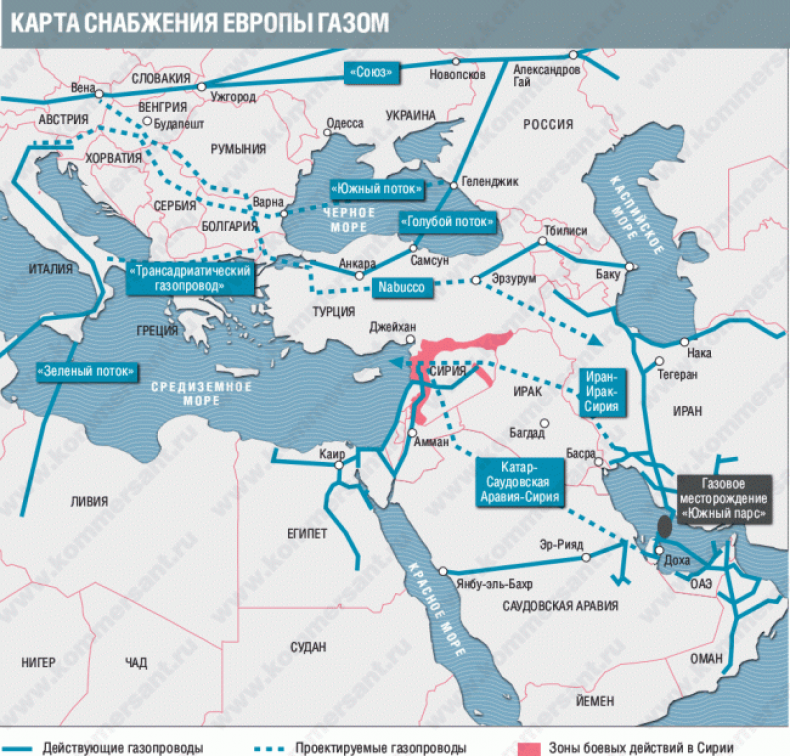 By the way, recently сообщалосьthat the “Islamic state” supplies oil to Ukraine and a number of other countries, exported from Syria, northern and north-western Iraq through Turkey. Members of the “anti-terrorist coalition” put together by the Americans do not stop these actions. The world oil market is already being trained to a new supplier ...

Exactly the same plans for dividing Syria, noted at the CPR conference, were being hatched by the Western powers in the middle of the 1940's, in the second half of the 1950's, at the end of the 1960's and later. In the middle of 1950, the beginning of 1960, Turkey tried to occupy northern Syria adjoining it, where there are two oil pipelines from Northern Iraq to the ports of Ceyhan, Yumurtalik (Turkey), Baniyas and Lattakia (Syria). The same operation was planned during the Israeli-Arab war in June 1967 and during the exacerbation of Syrian-Iraqi relations at the end of 60-x and the beginning of 70-x.

The “resource-transit” principle of territorial redistribution has long been used by the West in the geopolitics of oil and gas. Quite recently, for example, Sudan was broken up according to this principle: “oil and gas excess” South Sudan became an independent state. The Suez Canal, which was operated jointly by Great Britain and France, was separated from Egypt in the 1920's - mid-1950's. Syrian-Iraqi scenario on all grounds from the same series.

Since spring - summer, statements by American officials and military have become frequent, teaching the public to the fact that the coming wars and military conflicts in the Middle East can take almost a whole era. The first to express this idea in May was CIA Director John Brennan. According to him, “the struggle (against the“ Islamic State ”. - AB) will be a long one”, and “this will cost big blood. " Then, Chief of Staff of the US Army Raymond Odierno, in an interview with CBS television channel, said that the anti-terrorist coalition led by the United States would need up to 10 years to defeat the IG grouping. “It can take three years, five years, seven years, 10 years to solve this problem,” stressed General Odierno.

The statements of Iraqi Kurdistan leader Massoud Barzani about the imminent disintegration of Iraq are becoming more and more confident. "Iraq will disintegrate, that is the reality", - said Barzani 6 July in an interview with the German newspaper Welt am Sonntag.

And on September 10 the line under these assumptions with the soldiers' straightforwardness was summed up by the director of the intelligence department of the US Department of Defense, Lieutenant General Vincent Stewart. is he saidthat "in the future Syria will split into two or three parts." The American general also stumbled over the government in Baghdad, saying that he did not agree with the fact that "the Kurds will again obey the central government of Iraq." 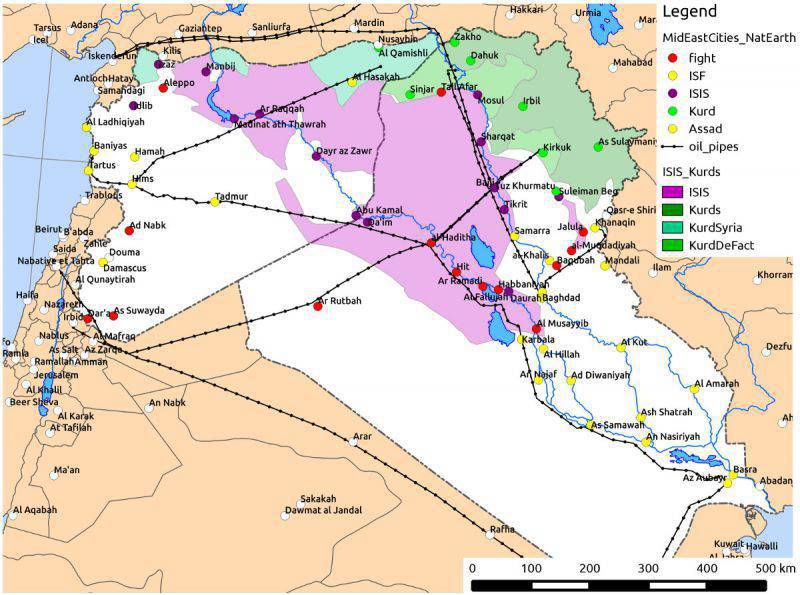 The general expressed himself mysteriously (he did not specify which “two or three parts” he mentally divided Syria), but an attentive reader, looking at the map of oil fields and pipeline routes adjacent to northern Iraq and eastern Syria, will easily figure out how the American military geographers drew borders of new “pipeline states”.

Ctrl Enter
Noticed oshЫbku Highlight text and press. Ctrl + Enter
We are
The energy field of Iraqi Kurdistan: modernity in numbersIranian geography
32 comments
Information
Dear reader, to leave comments on the publication, you must to register.