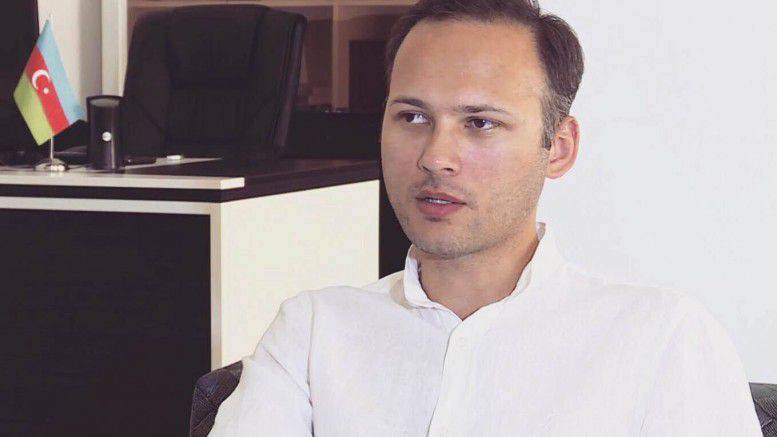 Bahrain is the “Achilles heel” of Saudi Arabia, Ali Hajizadeh, an expert on the Middle East, said to Sputnik Azerbaijan.


Bahrain - the smallest Arab country, the tiny monarchy of the Gulf. This country is smaller than Luxembourg, but of strategic importance for two regional powers - Iran and Saudi Arabia, and Bahrain is an ally of the United States.

The 5th Central Command Headquarters is in Bahrain fleet USA. For almost all of its history Bahrain passed from hand to hand, it was owned by Safavid Iran, and the Portuguese and the British. In the middle of the twentieth century, at the sunset of the British Empire, when the future of Bahrain was being decided, Iraq, Iran and Saudi Arabia claimed the island. The British decided not to transfer Bahrain to anyone, and in 1971, the country gained independence. Currently, the country is ruled by the Al Khalifa family.

For some time now, the ruling family has embarked on the “Dubaiization” of Bahrain. The authorities are striving to make Bahrain a regional tourist and financial center. In fairness it should be noted that in part they succeeded. In addition, measures were taken to create an industry based mainly on metalworking and oil refining.

Although some amount of oil is extracted in Bahrain, but this does not constitute significant volumes, and in conditions of low prices for black gold it has almost no economic value at all. However, the standard of living and income of the population is quite high. The state naturally does not have strict Sharia law, as we can see from the example of Saudi Arabia.

It would seem a complete idyll, but this is far from the case. According to various estimates, from 65 to 75 percent of the population of Bahrain practice Shiite Islam, the rest, including the ruling elite led by the Al Khalifa family, practice Sunni Islam. This is the main problem of the kingdom. In Europe, for example, there are no significant problems in the fact that part of the Germans are Catholics, and the other part are Protestants. But not in the Arab East.

When in 2011, a wave of revolutions and riots swept through the countries of the Maghreb, this wave of the so-called “Arab Spring” reached Bahrain. The Shiite majority (according to some sources, at the suggestion of Iran) accused their authorities of oppression and demanded more freedoms and more power. Country swept the mass demonstrations of protest. 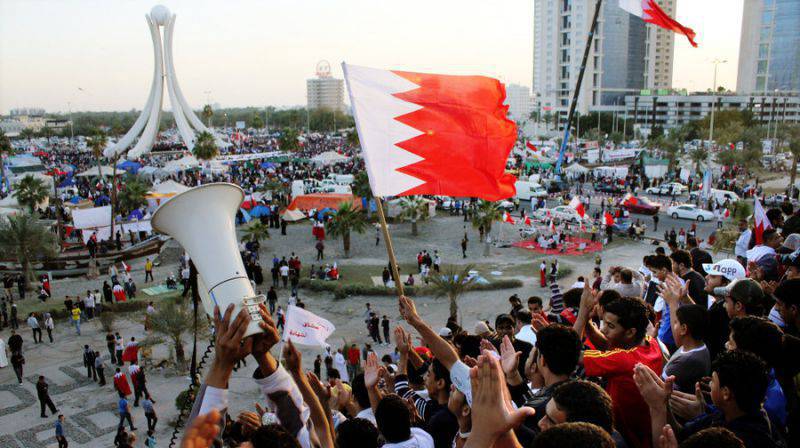 At a certain point, the authorities of Bahrain felt that they could no longer hold back the demonstrators, and turned for help to the GCC partners, first of all, of course, to their long-time patron and "elder brother" - Saudi Arabia. At the request of the authorities of Bahrain, on the bridge named after King Fahd, connecting the island state to Saudi, Saudi military and 1000 policemen from the UAE arrived in the country. 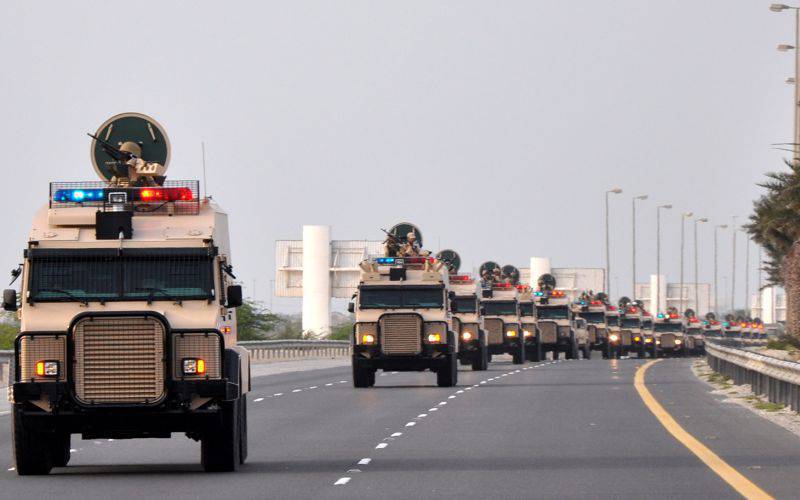 Although this intervention was perceived by the protesters angrily, it still helped the Al Khalif family to remain in power. However, along with this, the fact of the intervention gave Tehran the reason to grumble louder about the position of Shiite co-religionists in Bahrain. Since the times of the Shah, a number of Iranians have lived in Bahrain, who, although they consider themselves Bahrainis, have not completely lost their language and customs.

If the Bahraini authorities are to be believed, then Iran has secretly supported, and continues to this day, the Shiite opposition groups. At the time of 2011, Iran was unable to directly intervene in the events in Bahrain. On the one hand, Iran is farther from Bahrain than Saudi Arabia, which has several strategic advantages at once (25 km bridge, connecting the country with Bahrain, and geographical proximity, as well as an invitation from the authorities of Bahrain).

On the other hand, in the event of Iran’s military intervention, they would have to deal with both Saudi Arabia and the American fleet based in Bahrain. The then President of Iran, Mahmoud Ahmadinejat, although he was, of course, a fanatic, but far from being a suicide. Iran had to be content with the role of a backstage player. However, times have changed, Iran has real chances to stop being an outcast, and even become a new-old ally of the United States. Between the monarchies of the Gulf and Tehran (mainly between Iran and Saudi Arabia) the split intensified and there is an open confrontation. Iran and Saudi Arabia are already in full swing, fighting in Syria, Yemen, Iraq and partly in Lebanon. Bahrain can become another hot spot.

For Riyadh, for a variety of reasons, Bahrain is more important than Syria and Lebanon combined. The Saudis do not want to have an Iranian satellite in 25 kilometers from their borders, in a rich oil-bearing region. Saudi intervention in March 2011 of the year showed that Riyadh was ready to respond instantly and sharply. Naturally, Iran knows this, but the temptation to get Bahrain is also great.

It's safe to say that since 2011, not everything is calm in the kingdom of Bahraini. According to the Arabic version, the Iranian regime is guilty of this, which strongly supports, and sometimes even directs, Shiite political groups and sometimes terrorists, prompting them to fight against the authorities, thereby swaying the situation in the country and keeping Riyadh in tension.

If you turn to the Iranian version, then everything is not so: Tehran believes that the authorities of the kingdom are to blame for their problems, and that they should better listen to the voice of their people. As for Washington, the United States has repeatedly stated the need for the democratization of Bahrain (for reference: Bahrain before the events of 2011 was the most liberal country in the Persian Gulf).

Naturally, Washington’s requests and desires regarding the need for the democratization of Bahrain were not so “insistent” as it was with Libya, Saddam’s Iraq or Syria, or Iran. In Manama and Riyadh they understood this perfectly and continued to play their game. From time to time, terrorist attacks occur in Bahrain, primarily against security forces. All this discourages tourists and investors. Of course, this situation can not affect the standard of living of citizens.

In this situation, a small but strategically very important Bahrain plays the role of the Achilles' heel for Saudi Arabia. Riyadh does not want to fight on two fronts in Yemen and Bahrain, so the Saudis are trying with all their might to prevent a pro-Iranian coup or revolution in Bahrain.

Such a turn of events, on the one hand, would create a strategic bridgehead for Iran to further advance to the Arabian Peninsula, on the other hand it could to some extent put the United States in an awkward position. Although it cannot be excluded that Tehran can agree with Washington on the presence of the US Navy in Bahrain.

Also, one should not lose sight of the factor that if the regime changes in the country and the pro-Iranian forces come to power, the economic prosperity of Bahrain will come to an end, and the standard of living of citizens will be several times lower than now or before 2011. Naturally, the ruling elite of Bahrain is also aware of this, and is trying to use this factor in the education of "irresponsible citizens."

For Bahrain, much also depends on the outcome of the battles in Yemen and Iraq, as well as on the price of oil. Despite the fact that Bahrain itself is not a significant exporter of oil on a global, or even regional scale, its patron and main economic partner Saudi Arabia depends heavily on the price of black gold.

Currently there are several scenarios for Bahrain;

1 Elite goes for a democratic transformation on the European model

The positive side: with a successful scenario in the long term, the Al Khalifa dynasty can maintain its power and economic position.

The negative side: taking advantage of democratic freedoms, the Shiite majority can press the Sunnis (as in Iraq), which is fraught with clashes between the old Sunni and the new Shiite elites, this will inevitably cause bloodshed and intervention by Saudi Arabia.

2 Leave everything as is

Authorities may try to leave things as they are, by conserving the system. In this they will be helped by Saudi Arabia and other Arabian monarchies, which are just now learning to conduct coordinated military operations outside their borders in Yemen (Bahrain is also participating).

Naturally, in this scenario, Iran will seize the opportunity to pull the nerves and resources of its adversary through Bahrain. Nothing good will be given to either Bahrain or its people.

It is also possible that other regional and extra-regional players, such as Turkey, France, and to a certain extent Pakistan or Egypt, will be included in the game. If no major world or regional cataclysms occur, the Al-Khalifa dynasty and its allies can hold Bahrain for a very long time, if not forever.

Unfortunately, we have to admit that the citizens of Bahrain have become hostages of the geopolitical game and the interests of neighboring countries.

We are in Yandex Zen
Iranian geography
Six myths about the events in Bahrain
1 comment
Information
Dear reader, to leave comments on the publication, you must to register.