16 September 2015
8
This person is no longer with us, but the memory of him is alive in the hearts of his children, grandchildren, and countrymen. Pavel Leontyevich Ryabukhin - a simple collective farmer, a labor veteran, a veteran of the Great Patriotic War. Simple Russian soldier. He honestly fulfilled military duty, paying with his blood for the freedom of the motherland. 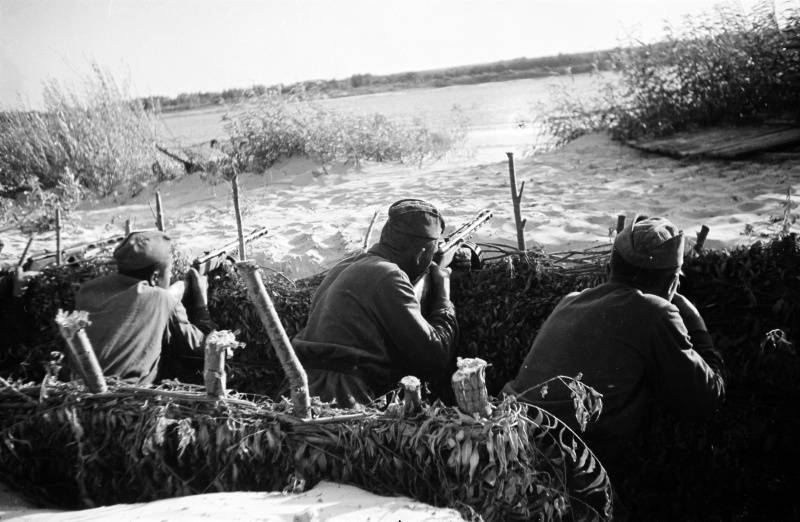 Three brothers Ryabukhins in the forty-first went to the front. Two returned from the war. Junior Dmitry was killed in battle. There were millions of such soldiers, in the bitter time of the country who bravely stood up to her defense and committed a collective feat. Before the war, Pavel Ryabukhin did not even think about distant countries. He was always well in his native Don region, where he plowed the land, raised his daughter, loved to go fishing.

However, by the will of an evil fate, fighting with the enemy, he had to walk on foreign lands to the very center of Europe. Just two weeks after the start of the war, 6 July 1941, the father of a happy family was called to the front. In the farm Bazki he left a pregnant wife. Soon the born son did not live a year. They buried him at home in the garden. The Ryabukhins' little daughter did not survive the war either.

And then in the summer of 1942, the farm was on the defensive line when the Germans occupied the right bank and reached the Don. Our servicemen lived in the Ryabukhins' hut, and there was a Katyusha in the garden, which was firing at Zadon. The enemy periodically made air raids, bombed the left bank. A grieved woman, putting the belongings in a wagon, into which she harnessed a cow-nurse, together with other farmers, was evacuated into the area, in the Sukhoi Log, to relatives.

The pain of the inconsolable loss did not leave her. Only hard work in the field, on the current distracted her from sad thoughts. And Pavel Leont'evich, meanwhile, walked by the front roads, which drove him to victory in the whole 4 of the year: the Caucasus, Ukraine, Moldova, Romania, Bulgaria.

In Bulgaria, the soldier met the long-awaited good news of Germany’s surrender, but was demobilized only in December 1945. Experienced fighters trained recruits to the wisdom of the military communications specialist. And the line operator 1001, a separate cable pole company, corporal Pavel Ryabukhin, was a skillful and courageous signalman.

Children born after the war were able to find out about the deeds of their father thanks to information published on the website “Feat of the People”. Here is an extract from his award sheet: “In the battle on October 12, 1943, when the platoon was transported to the right bank of the Dnieper, he received a mission to establish a communication line and completed the task. And soon there was an enemy raid aviation, and the connection was broken. Despite the bombing, Ryabukhin was the first to jump on the line and began to repair the damage. At the risk of his life, in a few minutes he repaired 11 injuries and restored communication. ”

By decree of the Presidium of the Supreme Soviet of the USSR, Pavel Leontyevich Ryabukhin 30 of November 1943 of the year was awarded the medal "For Courage" for the exemplary performance of the combat missions of the command and the valor and courage displayed at the same time.

And in August 1944, the signalman Ryabukhin again distinguished himself in battle, and his feat was marked by the Order of the Patriotic War of the second degree: “During the breakthrough of the enemy’s 20 defense in August, 1944 in the Kirkaesh area, serving the line, showed exceptional courage and courage. The communications site was under fire from the enemy and was damaged. Ryabukhin under a strong machine-gun and mortar fire eliminated 8 damage on the line. "

Pavel Leontyevich Ryabukhin was also awarded with military medals "For the Defense of the Caucasus", "For Victory over Germany", and in honor of the 40 anniversary of the Victory in 1985, he was awarded another Order of the Patriotic War.

A war veteran was also awarded commemorative medals in honor of the victory in the Great Patriotic War, in honor of the anniversaries of the Armed Forces of the USSR, and the medal of George Zhukov.

Today, the children and grandchildren of Pavel Leontyevich cherish all the awards, with particular trepidation they read these documentary testimonies about the heroism of the father from the archives of the Ministry of Defense. As Pavel Leontyevich’s daughter Anna Pavlovna Belyaev recalls, in childhood children all loved to listen to his stories about the war. But his father spoke of her as a simple, not at all heroic work, which he performed daily on the collective farm.
Returning home from the front, the soldier again became a tractor driver. During the four years of war in peasant labor, his hands were so missed. Father, as he fought, honestly, worked with full efficiency on the collective farm. For which he earned the respect of people and received the title of Honorary Collective Farmer.

And also Pavel Leontievich was a master of all trades: carpenter, carpenter, cooper. He built his house, helped build relatives. He was also an excellent fisherman, himself weaving nets, venteri, hollowing out Kayuki, not only his family, but also supplied all his neighbors with fish. Fortunately, he had a chance to live a long active life.

Until 90 years, Pavel Leontievich rode a bicycle. Having reached the 70 anniversary, the old people still held and themselves pissed over the cow. Until very old age, she and her mother were an example of hard work and kindness for their children Anna, Lydia, Viktor and Kostya, who, unfortunately, died very early.

Daughter Anna Pavlovna for a long time was an accountant on the collective farm “Pervomaysky”.

Lidia Pavlovna became a seamstress and 36 worked for years at a factory in the city of Millerovo (Rostov region).

But the special pride of the father and the whole family was his son Viktor Pavlovich, who graduated from the Voronezh Higher Military Aviation Engineering School and dedicated his life to service in the armed forces. Today Viktor Pavlovich Ryabukhin is a retired lieutenant colonel. He heads the council of veterans of the city of Schelkovo in the Moscow region and does a great deal of work on the military-patriotic education of young people on the example of the heroic generation of his father Pavel Leontievich Ryabukhin. Because it considers: the memory of heroic events and people making history countries must live forever.

We are in Yandex Zen
Sniper raised real people
Thunderbird revolution. Maksim Gorky
8 comments
Information
Dear reader, to leave comments on the publication, you must to register.