They went to the front 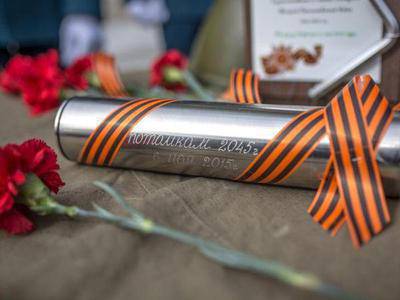 
The memorial was built by the people raised funds. The marble slabs are carved with the names of valiant warriors who sacrificed their lives for the freedom of the Fatherland. During the grand opening of the memorial, which was attended by villagers - war veterans, those who worked in the rear, and their grateful descendants, a capsule was laid at the base of the monument with a letter in 1995 year - the year of the 50 anniversary of the victory over Nazi Germany.

The capsule with the appeal to the future generation, signed by the veterans of the Great Patriotic War, was opened, as it was bequeathed, in the indicated year. The letter was read at the memorial at the rally dedicated to the holy Victory Day. Today it is stored in the Meshcheryakovsky Museum of Local Lore.

Here is what the warriors who went through a fierce battle wanted to tell the descendants:

“We, the participants of the Great Patriotic War, appeal to you, compatriot of 1995 year. For many years, our homeland has a peaceful sky, bombs are not torn, no blood is shed. For peace and happiness paid dearly. The twenty million best sons of the country laid down their heads in the name of life on earth.

The war claimed the lives of 360 residents of the Meshcheryakovsky village council, every tenth one called to the front died. This irreparable loss is mourned and still today by the mothers and children of the fallen soldiers. Their names are carved forever on the plates of the memorial, for which you care, as your consciousness tells you. Remember, my dear compatriot, that for the sake of happiness on earth, these people gave their lives, sometimes quite young ones.

You should not be ashamed of your ancestors. Be proud of them and remember them. Rereading on marble the names of those who gave their lives in the name of the freedom of the Motherland, you will remember about someone. Remember: the soldiers of the Great Patriotic War, not sparing themselves, fought for your future.

We, war veterans, are pleased that the memorial for the dead are flowers, pioneers are tying ties here, handing out tickets to the Komsomol members, escorting the guys to the army, and the newlyweds come to worship the heroes and thank them for the opportunity to love and live happily.

50 years have passed since Victory Day. But time should not be power over memory. Tell your children about people whose names they read with you on marble, so that they remember those who gave their lives for the future. The war brought the people such grief, which hurt the hearts of mothers, widows and orphans even today.

We withstood all the war, we withstood and won. We won so that the future generation would never know the black days that we had to go through. Our young compatriot, support the economic and military might of our Motherland. ”

May the victorious banner of the great Lenin overshadow you. ”

Father and son went to war

Petr Yesakov, a resident of the Meshcheryakovsky hamlet, interested in history native land and did much to create a local history museum in the farm, provided documents, familiarity with which burns the heart. Vividly imagine the terrible wartime and very simple young people, who fell to create the story itself.

Young Nikolay Pozdnyakov from that January 1943 of the year 24 was already summoned on October 1943 of the year died from his wounds and was buried in the farm of Lugovoy, Vasilievsky district of Zaporizhzhya region. But parents learned about this only in 1974 year, having received an answer to a request from the USSR Ministry of Defense - certificate No. 123880 from January 23 1974.

And twenty days before his death, 4 of October 1943, Nikolai wrote this letter home to the Batalshchikov's municipality Arina Petrovna at home:

“Mom, now I ask: describe all the events that took place in 8 months. Do uncle Osip and dad send letters? Does anyone of my guys send letters? Where is Lagatin Petro and what does his mother, Elena Petrovna, do? Generally, if there are any newswrite everything. Have they taken any of the girls in the army? If taken away, send the address. If at home, then hello to them. Let them write letters. Now I will describe my life. She had better nowhere. We eat well, uniform is also good, good rest. Everything, I finish writing. Yes, and I do not know what to write about. And most importantly: do not want to write a hand. Not that with joy or even because of what the hand trembles. Goodbye, tightly shake hands. Tell everyone that you are warmly welcome. Sorry to write poorly. He wrote on his knee, and he wrote on standing. "

Twenty days later, Nikolai Pozdnyakov was gone. Arina Petrovna sent her son's letter to her husband, who was also at the front. Konstantin Petrovich wrote to his wife: “June 9 1944, at dinner, I read these expensive lines of the letter in 8 hours two and a half years from my beloved son Kolya. I look at the letter as its image. Arisha, keep this letter. ”

The last news of his son from the war was kept in the Pozdnyakov family as an expensive relic for many years.

But another letter from fellow countryman and colleague Nikolai Pozdnyakov - Konovalov Fyodor Nikolaevich, to whom parents after the war asked to talk about their stay at the front together with their son, and who helped them in finding information about Nikolay.

The letter contains a detailed account of how they, beardless recruits, received their baptism of fire, which they experienced in subsequent battles, which experienced fighters taught fatherly to young men: “Dear Konstantin Petrovich! With Nicholas, we were together until February 24 1943. They were summoned in the farm Mrykhovsky, then walked to the station Shiryaevo (in 10 km from the Voronezh city of Kalach).

Issued uniforms after the bath. Passing Chertkovo, went to Starobelsk. In Barvenkovo ​​received weapon. The first fight was for Lozovaya. There were victims. The first to die was Melikhov Yegor, the son of Ephraim. He was fatally wounded in the stomach. Here I parted with my father for a while. He left in the group with Stefan Petrovich Viflyantsev in intelligence. With Nicholas your we survived the battles for Pavlograd, Znamenka.

But the hardest fights were for Novomoskovsk. Again I met my father there. It was hell. Only a handful survived, were surrounded, and went out at night to the Donets. The bulk of Migulin residents remained in Novomoskovsk dead. There is a monument there. In the grave are 47 people. We were more likely to be driven to the front line. Red Army books have not had time to issue. And when they went on reconnaissance, they handed over all the documents who had them. When we went to the front, our marching company was No.16.

And for replenishment they got into the 1-th Guards Army, into the 35-th Guards Division, into the 101-th Guards Regiment. The regiment commander was Major Fyodorov, division commander, Colonel Kulagin, commander, senior lieutenant Taganov.

Konstantin Petrovich! I am sending a newspaper, but it is in Ukrainian. Where I just did not write. The regiment was leaving the encirclement. Funeral was no one to write. I confirm that in the battles for Lozovaya, Pavlograd, Znamenka, Novomoskovsk Nikolay was with me.

As I remember Nikolai, he was brave, too, physically he was stronger than me, he was a humorist. We studied together at the Tykhov school, bathed together in the Silent River, ran through the gardens. The 3 families got together with the marching company - fathers with sons: my father and I, Pozdnyakov Semyon Dorofeyevich with my son and Meshcheryakovs. I do not know their fate. But I know that several people left the front with weapons. My father was at the front in 1941, in the Crimea and in 1942, near Kharkov, and he also told me, your Nikolay, Ivan Kovalev and other guys, near Barvenkovo: “Look, guys, do not be silly. Then families will suffer because of you. ” Father told us that before the battle, before the offensive, we did not gorge, because it is difficult to endure a wound in the stomach, it is fatal, taught how to make dashes, warned: in no case do not take alcohol in the mouth before the offensive.

So it was. Remembering is very, very difficult. The past is not forgotten, the memory of the victims must be preserved. I hold you tight, dear Konstantin Petrovich. Sincerely - F. Konovalov.

Here is such a documentary truth first-hand about that cruel war that claimed millions of young lives. Forget about it - betray those who lay down their heads in the name of peace and freedom of the motherland.

Ctrl Enter
Noticed oshЫbku Highlight text and press. Ctrl + Enter
We are
Indian weapons in the US Metropolitan Museum (part of 4)Diplomats of the People's Commissariat of Defense: on the eve and during the war
2 comments
Information
Dear reader, to leave comments on the publication, you must to register.