How do policemen treat a shovel in a car, or a citizen in hand?
Are there any restrictions on carriage in a car (for example, carriage is only allowed in the trunk)?

Normally related. Spatula is not weapons, and is the entrenching tool. Nothing forbids it to carry it freely in the trunk of a car, or carry it in a plastic bag.

By the way, that's why I stopped carrying a rubber club in the car. There were a lot of questions for her. Now I drive a shovel. The paddle in the case, fixed "in a hiking manner" looks very familiar and peaceful. A well-deserved "old man" - a canvas cover - well hides sharpened faces of the bayonet from prying eyes.

If a particularly curious comrade in uniform comes across, there is always the answer: “I’m digging worms for her”. And to the question of why the blade is sharpened, there is always the answer: “Because it’s hard to dig a blunt shovel.”
By the way, the Swiss shovel with a leather case looks even more peaceful and natural in the car than our MPL, which carries the image of a “formidable weapon of the Russian special forces”.

As for carriage in the car, in my opinion, any weapon or tool should be transported in such a way that it can be quickly reached. The trunk is not the best place for this. I drive a shovel in the cabin behind the passenger seat. So she does not catch the eye and you can easily get it. Some carry a shovel on the driver's door. There may be a lot of options, but you have to train yourself to confidently get the scapula and, if necessary, quickly leave the car with the spatula.

But if you sharpen your shoulder blade to a razor sharpness, attach a lanyard to it, plug it in your belt and go with it to a disco or a club, and a police patrol stops you on the way, then people in uniform will of course have questions. There will be questions if you use a paddle in a road conflict. In this case, another article will be relevant, which can be called "lawyer's advice."

Can you give a case from the practice?

In my opinion, the most important thing in the scapula is that a confident demonstration of this subject, as a rule, extinguishes the conflict at the very beginning.

One example: my friend, a doctor by training, somehow tried to dissolve on the road for money. Standard “auto-under” when an accident is artificially created.
On the desert road, he was one against three avtopodschiki. After he miraculously managed to brake, without touching the bumper of their car, he rushed out to meet the auto supporters with a spatula in their hands and sulkly asserted one phrase to all their cries and dances: “Who will come close, I will marry!” Surprisingly, there was no one to come . After the third day, the gopot spat, decided not to mess up, got into her car and drove away.

In another situation, and also in a road conflict, he had to use a scapula. But then he had a wife and a daughter in his car. The attacker was the driver of the second car with a knife in his hands. With the help of a shovel, a friend knocked the knife out of the hands of the enemy, after which the assailant simply threw his car and ran away from the scene of the conflict.

Share best practices on using a sapper blade for self-defense

I outlined the basic techniques and bundles for working with a small shovel in my book, The Small Infantry Shovel, a course of lectures on working with improvised means. In detail, we disassemble all the equipment at seminars and training sessions.

First of all I want to say that strikes with the edge of a sharpened tray of a shovel are very dangerous. Therefore, in the beginning, you should use strikes flat. Such strikes will stun the enemy and will not cause irreparable consequences. 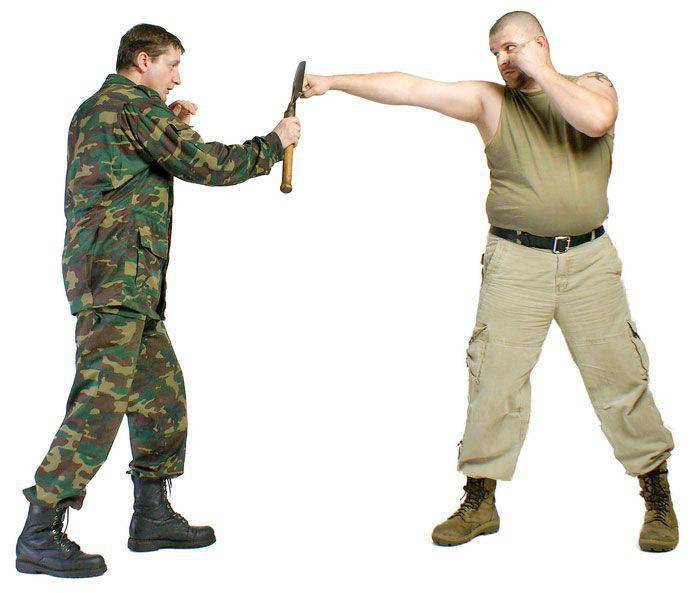 Straight or side stopping strike flat. It is applied with the whole plane of the tray to the head of the opponent and has a good stopping effect. [/ I] 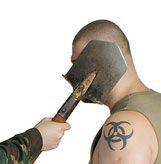 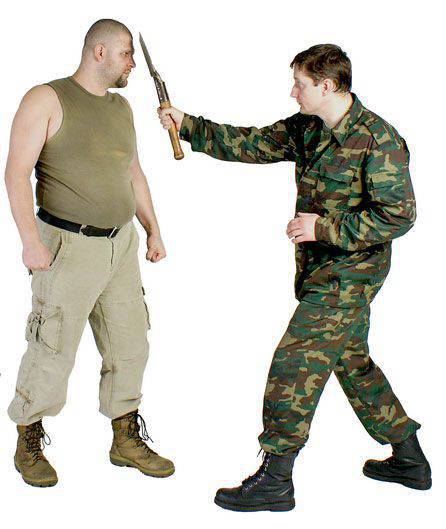 Push the enemy with stepping on the foot. Such a technique can effectively knock an opponent down much heavier than himself. The soft version of the reception, push in the chest. Stiff - push-punch to the base of the nose. 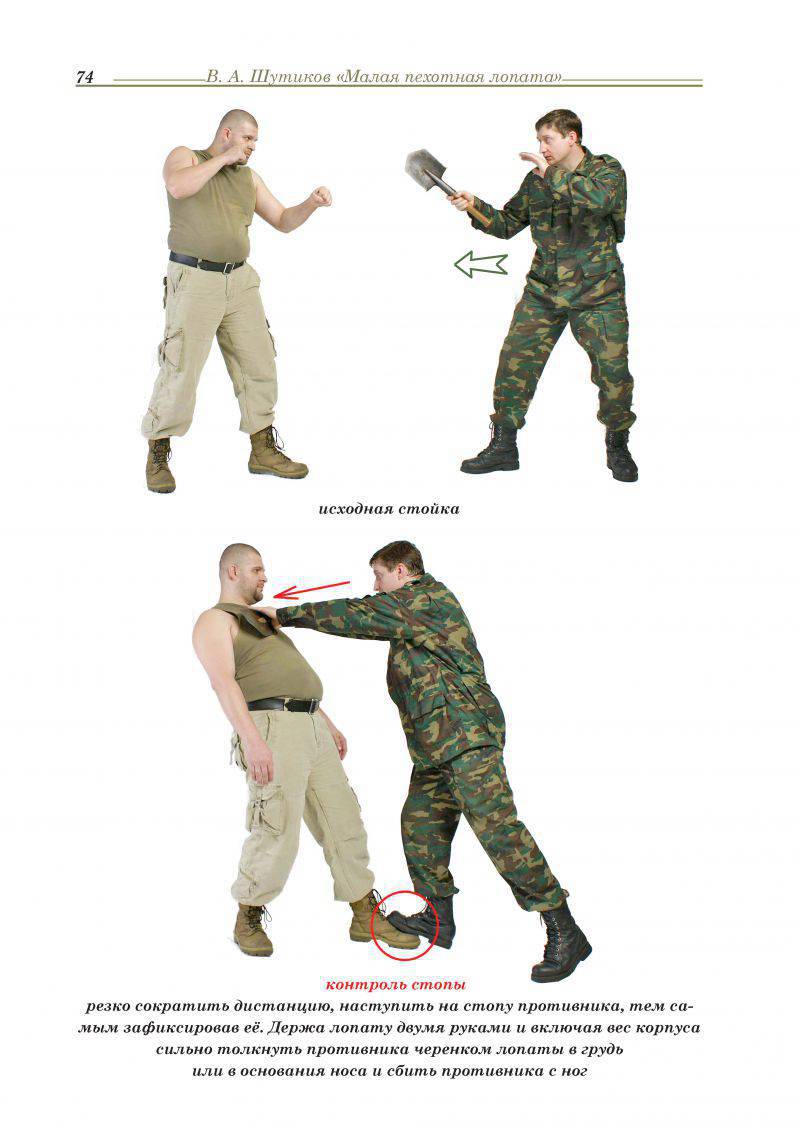 If the enemy is without a weapon, he will attack you with his hands and feet, then you can use “hard supports”: a support for the sharp edges of the shoulder blade under the attacking limbs. Stumbling over the sharply sharpened edge of steel, the enemy will inflict enough trauma on its own and stop the attack.

As an option: the attacker is a chopping blow to the opponent’s hand, a very effective technique that forces the opponent to abandon aggression. 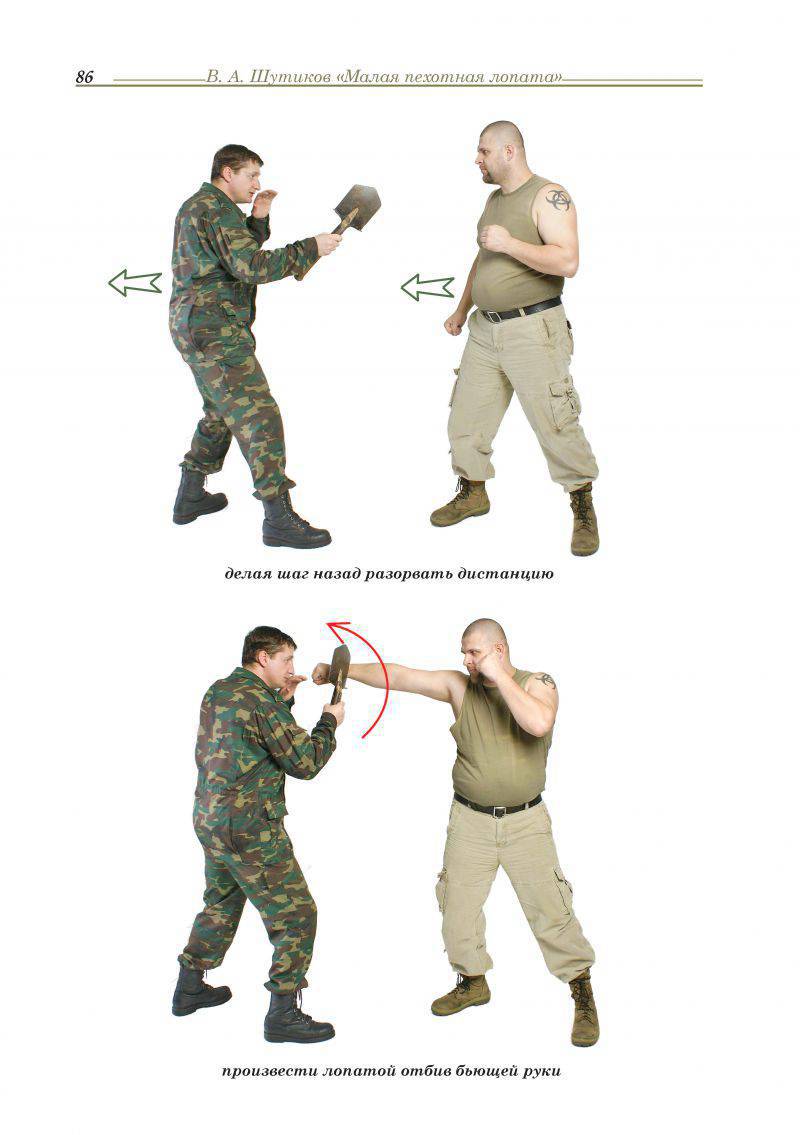 Similarly, a chop on the opponent’s leg 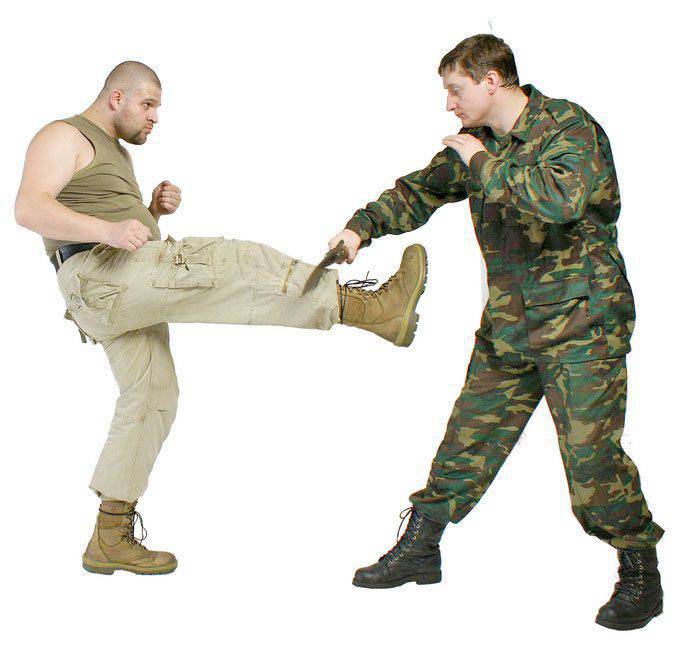 If the enemy succeeds in capturing, then the scapula can also be used to free it from capture in the melee. 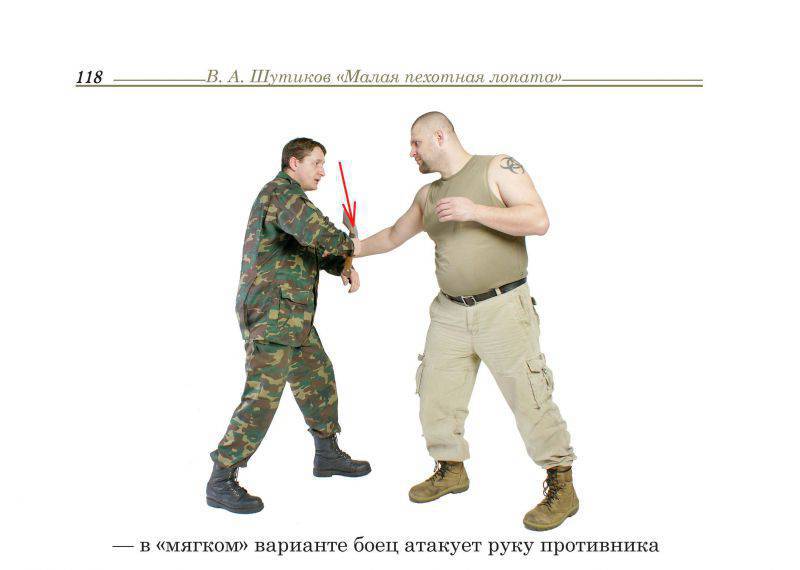 If the enemy is armed with a knife, then of course, and you will have to go to more stringent protection options. 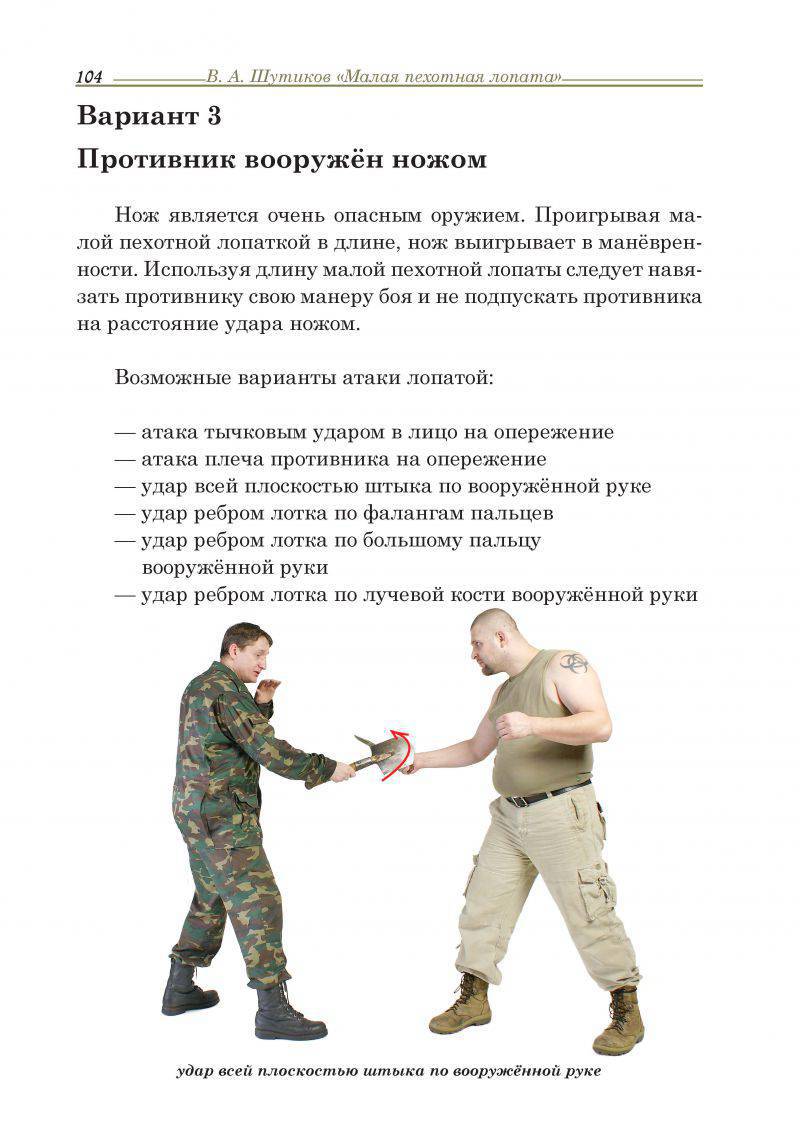 Here are just a few of the simplest actions from a large arsenal of techniques with a small infantry shovel.

Even in these three examples, you can see that the shovel can be successfully used at any distance and successfully withstand with it an opponent or opponents who have numerical superiority and can be armed with anything from bits and mounts to a knife and a similar shovel.

Depending on the degree of enemy aggression, you can use:
- soft protection options: stunning blows with a tray and a spade handle,
- hard options: chopping blows on the tubular bones of the hands and feet of the enemy.

Of course, in army hand-to-hand combat, techniques are used that lead to grave consequences, which are definitely not worth using in civilian life.

And your wishes - some interesting things, recommendations, advice.

I can advise dear readers who are interested in this topic, see the site dedicated to the small infantry shovel: http://zhab.livejournal.com/656905.html
The site contains materials on hand-to-hand combat, on shoulder blades of different countries, brands, historical reviews, memoirs of war veterans videos, etc.

And of course, I advise you to get yourself a small infantry shovel, it really comes in handy in life, and first of all, as a household item, and if necessary, it can easily turn into a formidable weapon.

Ctrl Enter
Noticed oshЫbku Highlight text and press. Ctrl + Enter
We are
Stick for city self-defenseSapper shovel for urban self-defense (part 1)
48 comments
Information
Dear reader, to leave comments on the publication, you must to register.