Russia builds ships for those who have money 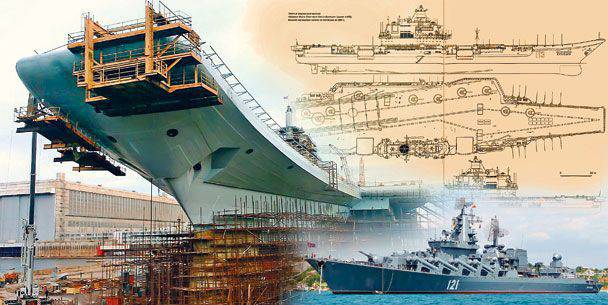 Twenty years of destructive "reforms." Such is the axiom of our time, justifying the delays and insurmountable (ostensibly) difficulties in updating the naval personnel of the Russian Navy. A submarine in twenty years and a frigate in nine. There is a complete loss of technology and production culture. We are not able to build anything, and we will need more ... ten years to restore the enterprises and lost personnel. It is advisable to buy another Mistral abroad, so that our shipbuilders will gain at least some experience in the design and construction of modern ships.

His name was “Eternal”

As is known, the last combat ships of the 1 rank (the large anti-submarine ship Admiral Chabanenko and TARC Peter the Great) were transferred to the Russian Navy in 1998-99. The destroyer “Eternal” is not among them, although he entered service on 7 years later. Now, together with the destroyer “Impressive” (new name - “Taizhou”), the destroyer “Eternal” (“Ningbo”) is serving in the Chinese Navy.

Briefly about the important thing: two rocket-artillery destroyers of the 956-EM Ave., incorporated in the 2002 and transferred to the customer in the 2005-06.

Three and a half years from the moment of laying up to the entry into service for the ship of the ocean zone with a full displacement of 8000 tons! The pace of construction is catching up with indicators of the Soviet period. Here it is, the great essence of capitalism, in the pursuit of profit capitalists work wonders. 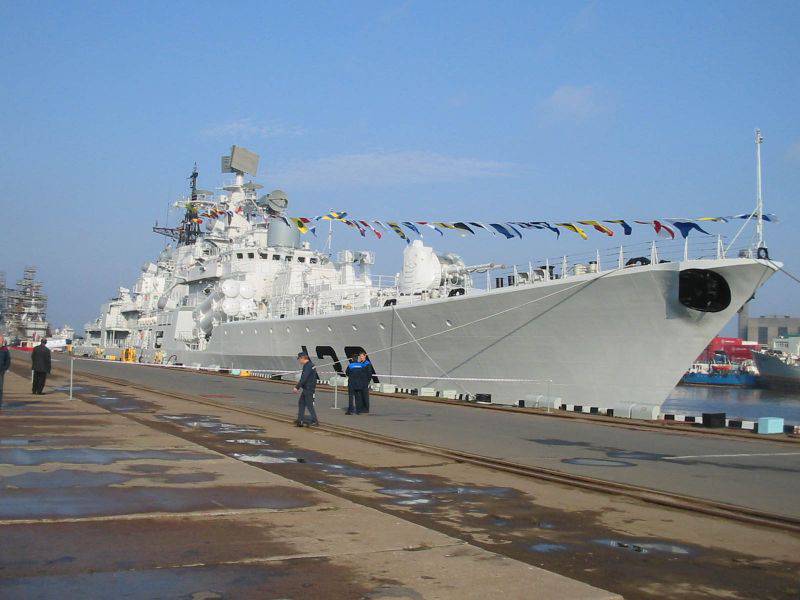 One of the main drawbacks of the 956 project was the lack of opportunities for the permanent deployment of a helicopter. The wishes of the Chinese were taken into account in pr. 956-EM (export, upgraded). In the shortest possible time, the specialists of the Northern PKB corrected the project: the destroyer received a completely modified aft part. The 130-mm artillery unit disappeared, the ZU90С launcher with the Uragan anti-aircraft complex was moved to its place. As a result of the rearrangement in the middle part of the body, there was enough space for a full-fledged helicopter hangar.

The anti-aircraft armament was strengthened by replacing the outdated AK-630 with two modern modules of the Kashtan ChekPan.

Unlike Russian fleet, content with the basic modification of the Moskit anti-ship missile system, China was supplied with modernized anti-ship missiles with an increased firing range (Moskit-EM, up to 200 km with a low-altitude flight profile). 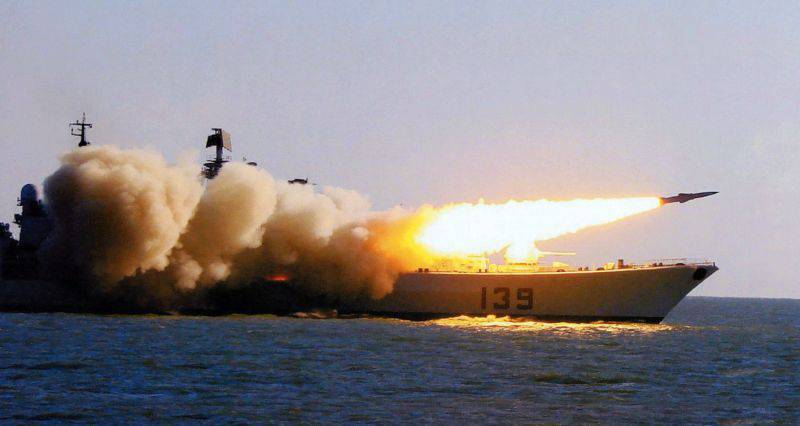 The destroyers “Taizhou” and “Ningbo”, along with two other “Hangzhou” and “Fuzhou” (formerly “Important” and “Thoughtful” - laid down at the Union, but completed with Chinese money in 1999-2000) make up a uniform shock PLA Navy connection carrying 32 supersonic anti-ship missiles and 192 anti-aircraft missiles. 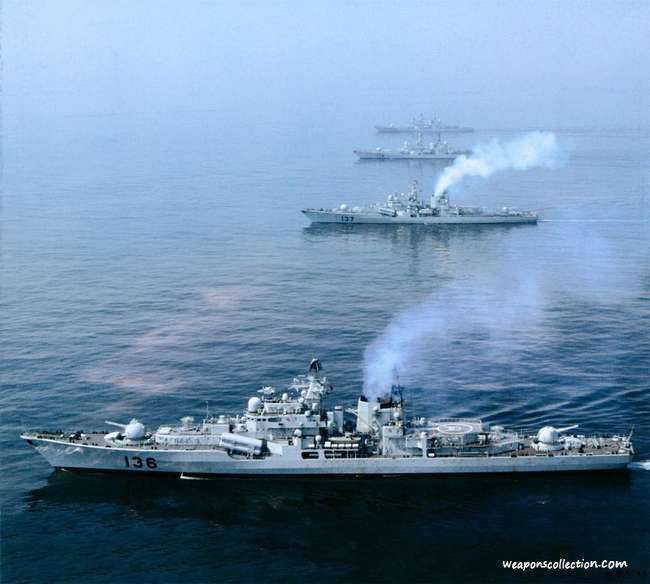 The anti-aircraft system C-300 does not need a long view.

In the world there are only three shipboard S-300FM. The first replaced one of the two C-300Fs aboard the nuclear-powered cruiser Peter the Great (there was not enough money to replace the second C-300F with the C-300FM).

Two other sets of C-300FMs were assembled in the middle of the 2000s and installed on board the destroyers Shenyang and Shijiazhuang (type 051C).

It is no secret that hull structures make up only a small part of the cost of ships. Along with the power plant, the most complex and costly element of the ship is considered its weapon. First of all - long-range air defense missile systems, for which appropriate means of detecting and controlling fire are required.

Both Chinese destroyers Type 051С were built in 2006-07. specifically to accommodate a unique anti-aircraft system. 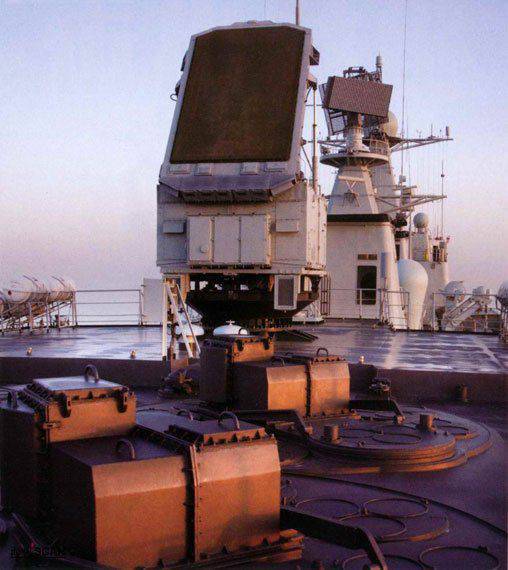 The C-300FM complex aboard the Shenyang destroyer. In the foreground is the elevating mirror of the ФХNUMXМ radar, in front of it are revolver-type launchers (1 launchers with 6 missiles in each). In the background - a general view frigate radar. All Russian production

What is the difference between the C-300FM and the "ordinary" C-300F installed on four domestic cruisers?

The difference in the fire control system. Instead of 30-ton “Tits” ZR-41, modern radar F1M with a phased antenna array is used. The firing range increased dramatically (from 90 to 150 km), the density of fire doubled (simultaneous targeting of missiles to 12 at six air targets - instead of six missiles at three targets at ZR-41).

The capabilities of the new control system allowed the ships to be equipped with the 46Н6Е2 anti-aircraft missile with an increased launch range (up to 200 km) and enhanced capabilities in the fight against ballistic targets.

The 051C type destroyers were the first PLA naval ships with zonal air defense systems. Thanks to the Russian C-300FM complexes, the Chinese destroyers were at that time the best naval anti-aircraft platforms, surpassing the American Aegis in terms of air defense / missile defense capabilities.

Our pride is “Vikramaditya” 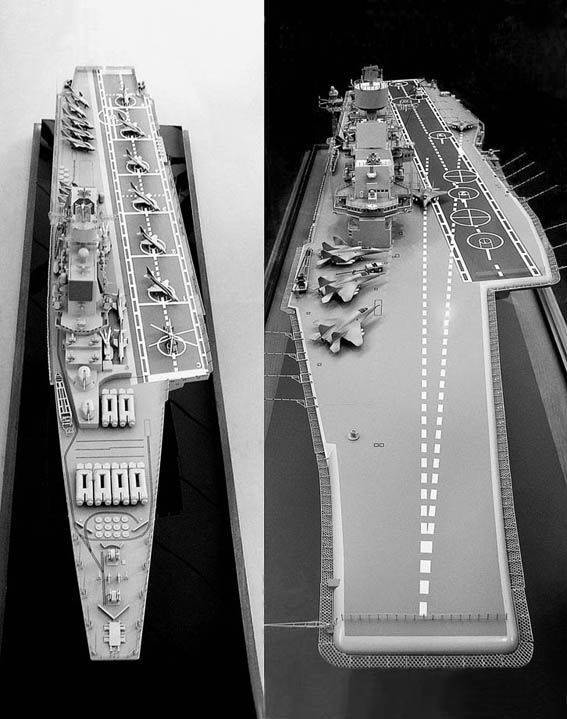 What changed? Everything. During construction on the ship, most of the elements above the waterline (234 hull section) were replaced and the power plant was completely replaced. 2300 kilometers of cables laid. Replaced boilers and installed turbines increased power. Desalination plants have been upgraded - the ship is now able to produce up to 400 tons of fresh water per day. The Indians demanded to dismantle all outdated weapons (subsequently, Israeli-made Barak anti-aircraft complexes will be installed on the ship). Restructuring undergone hangar. In the course of work, the aircraft carrier received a solid flight deck with an area of ​​8093 square. m. To ensure the operation of the wing in the bow of the take-off springboard appeared with a descent angle 14 °. To ensure the operation of the wing on board the Vikramaditya, two launching points were equipped with gas chippers, a three-wire air arrestor and an optical landing system Luna-3E were installed. The carrying capacity of the front-mounted air lift was increased to 30 tons. 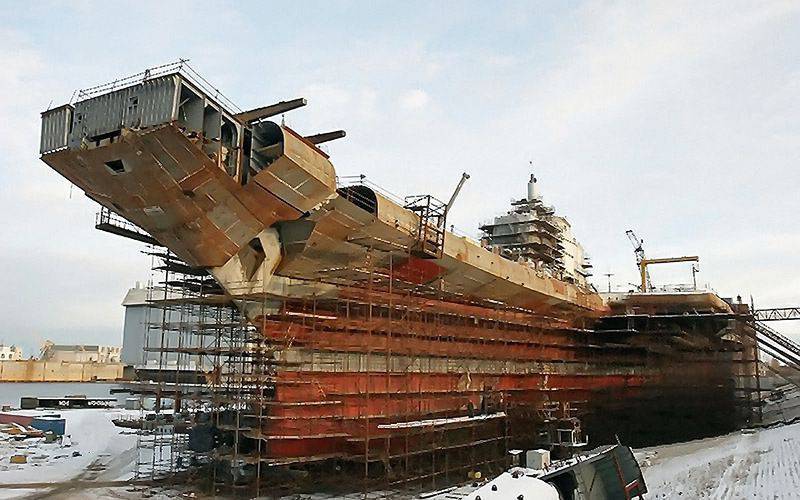 Initially, the contract for the modernization (in fact, construction) of the aircraft carrier provided for the transfer of the ship to the customer in 2008. Of course, this bold schedule was thwarted. The Russians ’bitten off the Indians, having doubled the estimate and delayed the transfer of“ Vikramadity ”by 4 of the year. Another year was spent on refurbishment of the GEM, the boiler-house group of which failed at sea trials in the 2012 year.

Well, now all the problems behind. For the second year INS Vikramaditya has served in the Indian Navy. 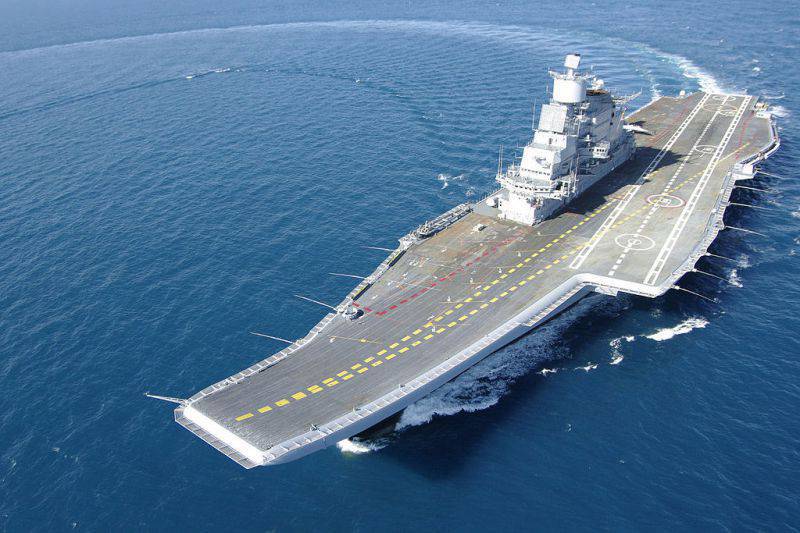 Contrary to all skeptics (“first learn to build frigates!”), A real aircraft carrier with a length of 283 meters and a displacement of 45 thousand tons was built in our harsh fatherland! Built quite quickly: the general course of work took no more than 8 years. The cost of deep modernization "Gorshkov" amounted to 2,3 billion dollars, which fits into international standards for aircraft carrying ships.

As soon as money appears, all questions end. Somehow the problem with “lack of capacity and personnel” is being solved. Instantly there is a place to build a ship of any size and destination (how so? Really? The only place where you can build aircraft carriers is the Nikolaev GCC, in the territory of Ukraine).

The aircraft carrier and four destroyers, not counting the weapon sets for the Indian and Chinese naval forces, are deck fighters, Rif-M anti-aircraft systems, cruise missiles of the Caliber family ... This list would be incomplete without Indian frigates of the Talwar type (Pr 11356). 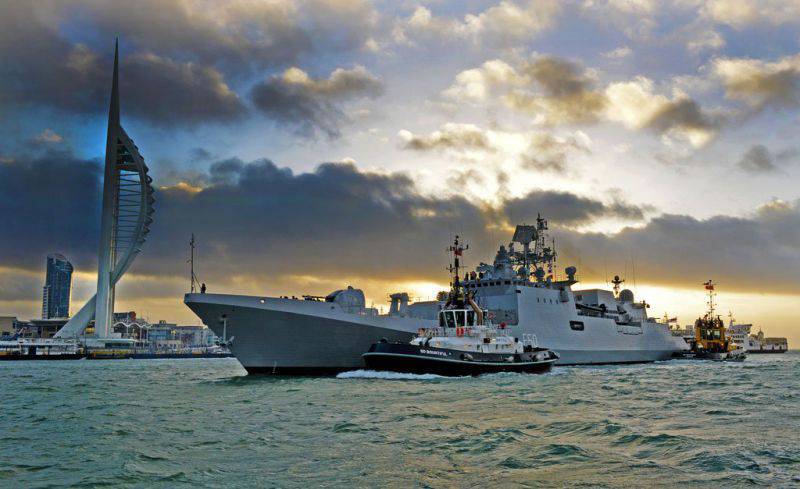 The Talwar project was developed on its own initiative by the Northern PKB on the basis of the 1135 Pr. Guard. Admittedly, the result exceeded expectations. From the once successful "Petrel" turned out to be a multifunctional warship of the XXI century: with the technology of "stealth", solid impact potential and excellent defensive systems for a ship of this class. Objectively, Talvar is the best frigate available today. The most balanced and well-armed, while relatively simple in design and cheap to build.

Between 1999 and 2013 Six ships of this type were built at Russian shipyards. The average rate of construction of one unit was 4 of the year from the moment of laying up to the entry into service. The first three Talvar were built on the Severnaya Verf, the last three were built on the Kaliningrad Yantar.

On the same “Yantar”, which already 11 year can not complete the BDK “Ivan Gren” for the Russian fleet. Similar in displacement, but much more primitive in equipment than the Indian Talwar.

It is curious that similar TFR pr. 11356, under construction for the Russian fleet in the amount of four units, also turned into long-term construction. The head Admiral Grigorovich, laid down in 2010, has not yet been handed over to the fleet. In general, there is nothing surprising.

Aircraft carriers, destroyers, "Talvary" - this is not all.

The invisible, both literally and figuratively, part of the list is the 15 submarines of the 636М and 636.1 projects for the naval forces of China, Algeria and Vietnam. All this is modernized “black holes”, elusive Varshavyanka type diesel-electric submarines with updated systems and weapons. Built in 2002-2015. with an average build rate of 2-3 of the year. 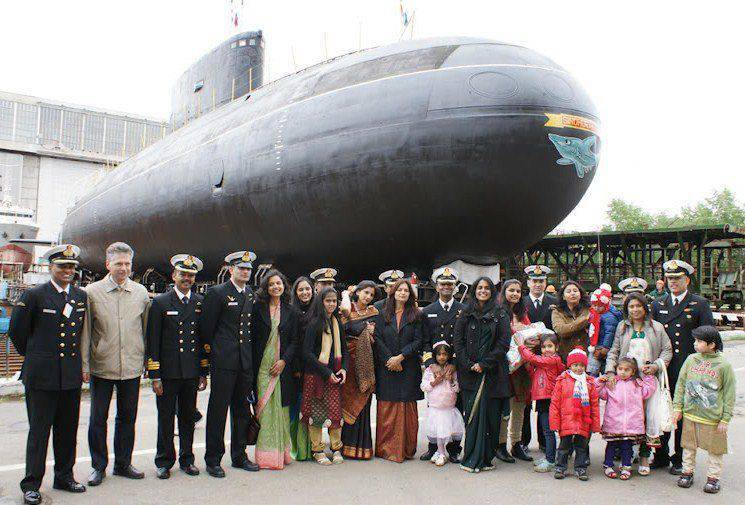 The Sindurakshak diesel-electric submarines after a deep modernization at the Zvezdochka CVD (2013 year). As part of the Russian-Indian contract worth $ 80 million, Sindurakshak received a new USHUS hydroacoustic station, a Porpoise radar, new EW tools, a CСS-MK-2 radio communications system, the Club-S guided weapon complex (anti-ship and tactical cruise missiles - export modifications of the family of Russian caliber missiles). Curiously, none of the “Varshavyanok” of the Russian fleet received such a modernization, having remained at the level of the 80s.

As for our sailors, they got “black holes” of a different nature. Mysterious financial schemes in which any means are dissolved.

Only this explains the paradox in which we are building an aircraft carrier for India, while the domestic fleet cannot receive a corvette for nine years (the “Perfect” epic on the Amur GCC, lasting from 2006 to the present).

The examples given eloquently indicate that we have no shortage of either technology or production facilities or personnel.

You can not make claims to the shipyards, the CVD and suppliers of high-tech equipment. They produce in private, guided by profit and common sense. Exports helped them to survive in the absence of orders from the Ministry of Defense. At the same time, access to the world market itself partially offset the losses caused by the collapse of the Union: now you can openly buy any technology and find a new supplier of materials and equipment. 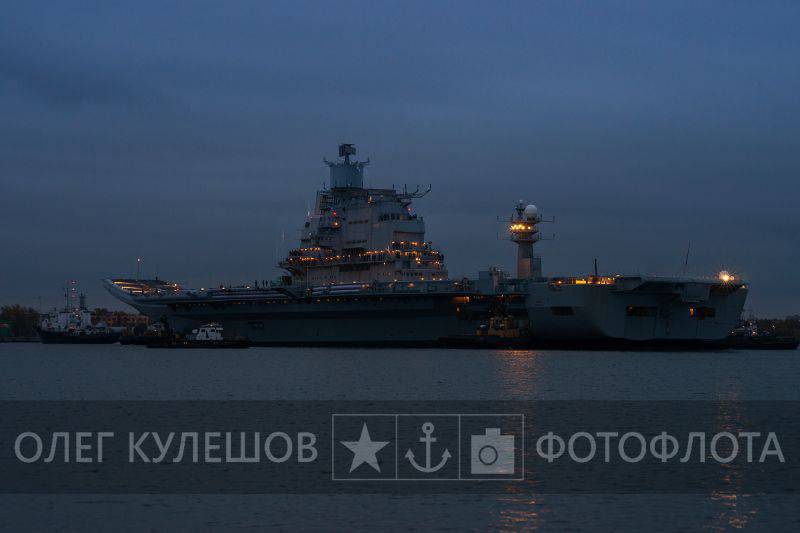 Ctrl Enter
Noticed oshЫbku Highlight text and press. Ctrl + Enter
We are
"Svetlana". History of creation"SEA BREEZE 2012" - press tour on the destroyer USS JASON DUNHAM
88 comments
Information
Dear reader, to leave comments on the publication, you must to register.