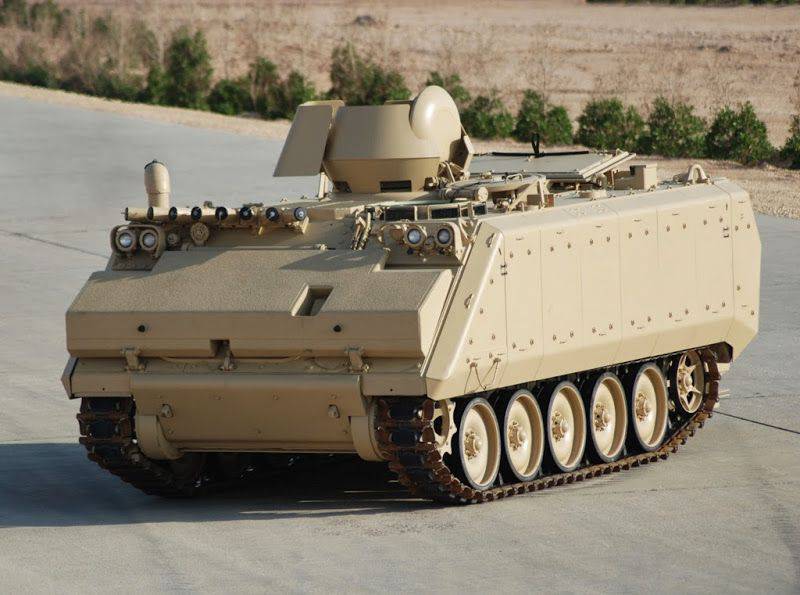 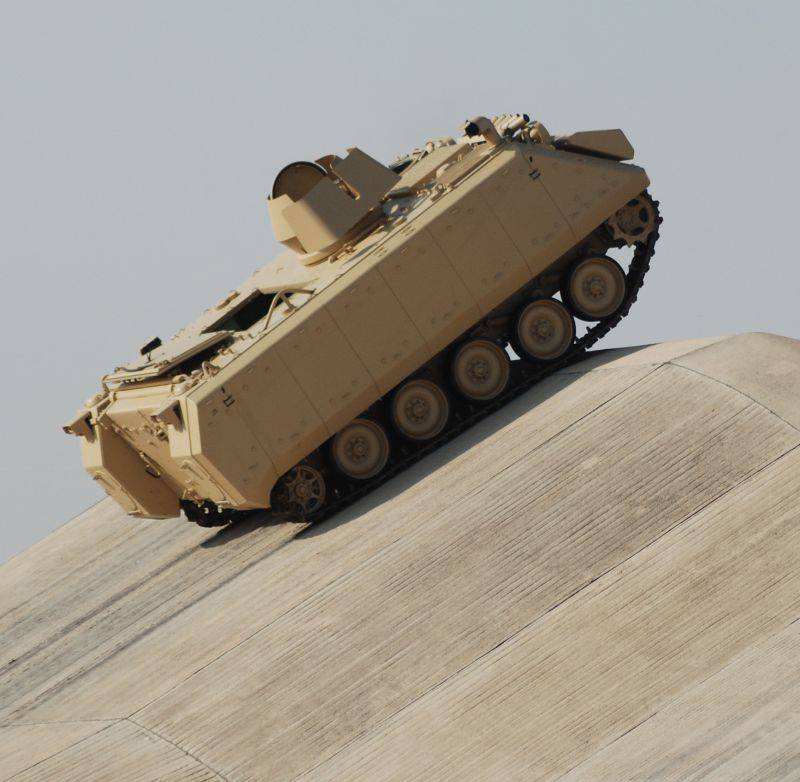 M113A4 in the standard configuration of the BTR with the protected turret arrow. You can also note additional armor protection and a group of eight grenade launchers in front of the hull on the right

The Turkish company FNSS Savunma Sistemleri is in the process of upgrading the 2000 tracked armored personnel carriers of the М113 series, supplied at the time by BAE Systems and armed with Saudi Arabia.

This work is performed by the Al Kharj plant in Saudi Arabia, and the vehicle sets come from the main plant of FNSS Savunma Sistemleri in Turkey. After the program began in 2004, more than 1000 machines have already returned to service.

The first contract with the kingdom involved upgrading 64 machines in two batches, followed by a contract for a third installment in the number of 300 machines, it also included redesigning specialized options for 11. The fourth batch consisted of 312 machines, the fifth batch of 320 machines, all work on them has now been completed. Under the contract worth 360 million dollars, the sixth lot machines are being upgraded; in the long run, upgrades to 2000 machines are envisaged.

When modernizing the machines and bringing them up to the M113A4 standard, the experience gained by the company during the work on the Adnan BBM manufactured for Malaysia was used in the program of the Turkish BMP TIFV and during the modernization of Dhabyan machines for the UAE.

When modernizing Saudi vehicles with an M113 BTR, everything is removed, the power block, suspension and internal subsystems are removed, only the original aluminum armor case remains.

The machine is then upgraded to the M113A4 standard, which includes increased levels of vitality and mobility. A new set of passive armor is installed in the front of the hull and along the sides in order to increase the level of ballistic protection from large-caliber machine guns and shell fragments. This kit is similar to the kit that was installed on the TIFV and ACV-15 variants, which were shipped to Malaysia and the UAE.

Inside the M113A4, an anti-splinter podboy is installed, additional protection is also installed under the hull and under the fenders to protect against mines and improvised explosive devices (SVU). An automatic fire extinguishing system is also installed in the habitable compartment.

Standardly, the M113A4 version is equipped with a heating and air conditioning system, a chemical reconnaissance kit and an integrated fault detection system.

The power unit is replaced by a 6V53-T diesel engine with 350 horsepower, mounted in a single unit with an Allison X-200-4B automatic transmission. The hydrostatic transmission ensures that the steering angle of the steering column exactly matches the angle of rotation of the machine. Also installed a more efficient engine cooling system. 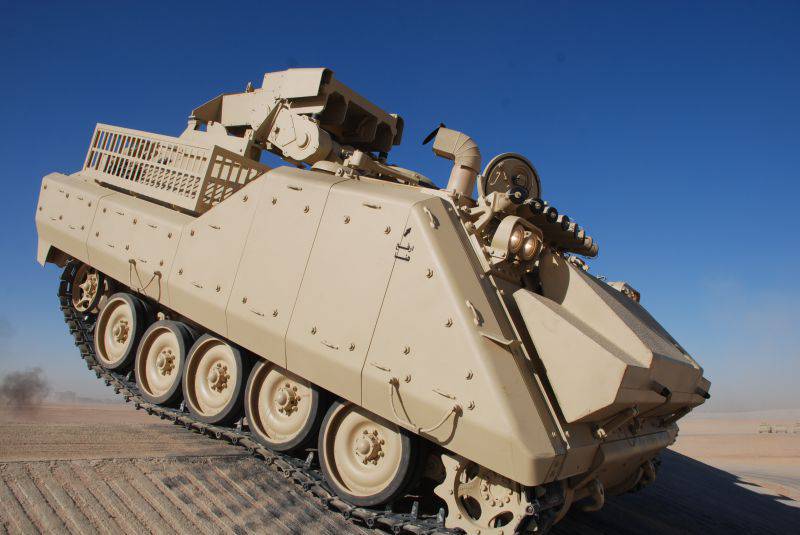 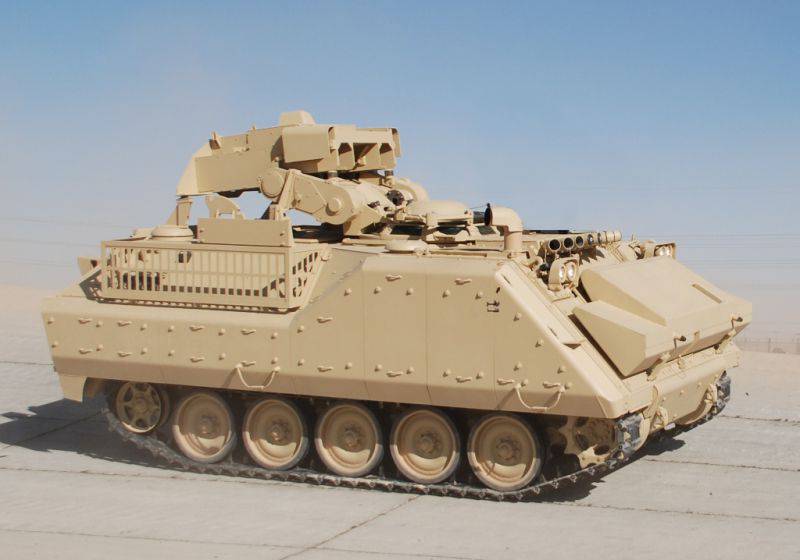 Upgraded version, equipped with a dual ATOW TOW launcher installed on the roof (shown in the folded position) 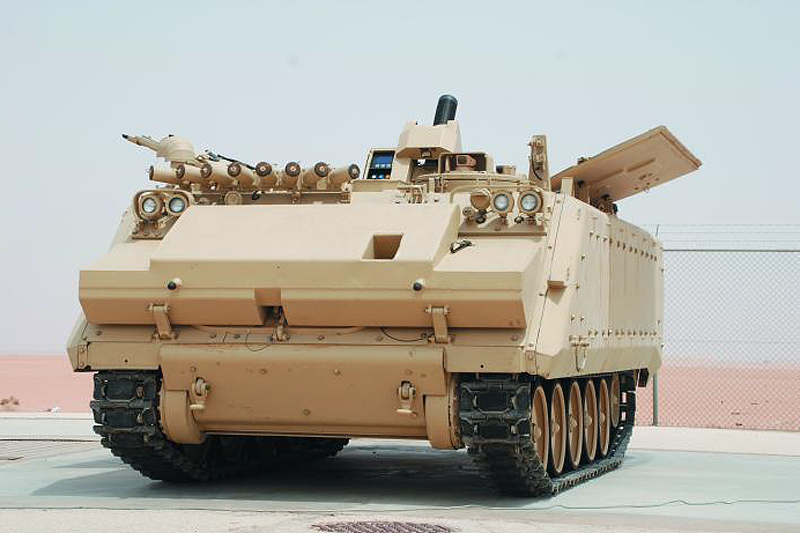 M113A4 in the version of a mortar complex with an installed 120-mm rifled mortar 120R 2RM (pictured in the shooting position, pointing back)

With a total mass of 13,5 tons, the M113A4 version has the specific power 25,92 hp / t, which can be further increased by increasing the engine power to 400 hp. Mobility is improved by installing stronger torsion shafts, new shock absorbers with a large stroke and a new rear guide wheel.

The driver’s original levers have been replaced by a more comfortable steering wheel, and a navigation display has also been installed.

The driver’s workplace has four day periscopes, a Thales thermal imaging camera built into the driver’s hatch allows him to operate the machine at night.

The fuel tank on the original M113 machine was installed inside the habitable compartment, but on the M113A4, aluminum armor welded tanks are installed on each side of the aft ramp. Such a layout is safer and frees up space in the troop compartment.

Despite the additional booking, the car kept buoyant, driven by the rotation of the tracks in the water, reaching a speed of almost 6 km / h. In the floating mode, the bilge pumps are turned on and a surge shield rises in front of the case.

In the basic configuration of the BTR, the M113A4 variant has a crew consisting of a commander, an arrow and a driver, plus an 10 man of troops.

As a rule, a group of eight firing-start smoke grenades is installed on the car in the front of the hull above the wave-reflector shield covering the front sector.

This armored turret was originally installed on the Advanced Armored Personnel Carrier (AAPC) armored personnel carrier, part of the TIFV family; 830 of such machines was supplied to the Turkish armed forces.

Another option to increase firepower is to install a single Sharpshooter tower from FNSS Savunma Sistemleri, which has electric towers and armaments and a backup manual branch. The tower was installed on some Malaysian ACV-15 machines, and more recently on Pars 8x8 machines supplied by Malaysia according to the AV8 program.

The turret rotates 360 °, the vertical guidance angles range from -8 ° to + 48 °; if necessary, an automatic and programmable obstacle avoidance system is installed.

Standardly, the tower has a ballistic protection in accordance with the 4 level according to the NATO standard STANAG 4569, on each side of the tower a group of four smoke grenades of 76 mm / 80 mm is installed.

Another option is the remote-controlled Claw Tower (or Pence in Turkish), which the company developed with its own funds in close cooperation with Aselsan. The Claw Tower weighs about 1700 kg and is equipped with a computerized fire control system and an automatic target tracking station.

The turret is welded from aluminum armor, on top of which additional steel sheets are installed, which provides protection that corresponds to the STANAG 2 4569 level, although it is possible to raise it to the 3 level. The turret can be armed with a two-axis-stabilized 25 mm or 30 mm cannon and a paired 7,62-mm machine gun; pointing arrows using a display and two handles, while under the full protection of armor.

The stabilized aiming unit includes a day camera, a thermal imager and a laser rangefinder safe for the eyes and is distinguished by independent guidance in azimuth and elevation.

With the installation of 25-mm KBA cannons with selective power, the combat styling comprises 210 ready-made shots and 600 ammunition for an 7,62-mm machine gun. This weapon is recharged from inside the car. The tower can be installed groups of smoke grenade launchers caliber 76 mm and or alternative.

Other guns can be installed in the combat module, such as 25-mm M242 from ATK Armament Systems, 30-mm MK44 with selective power and Mauser 30 mm MK30 series.

The Claw RCT turret has significant growth potential, for example, an independent commander’s day / night panoramic sight can be installed. Images from cameras installed around the perimeter of the platform can be displayed on the flat panel display of the shooter in order to provide all-situational awareness, as well as information from the battle management system.

In addition to upgrading machines to the M113A4 standard, the company reworked these armored personnel carriers into more specialized versions. These options are as follows: M577 control station with a raised roof to increase the internal volume; anti-tank configuration with a roof-mounted launcher of two ATGM TOW; sanitary option; option BREM; two different conveyors of mortars - one with a French company TDA 120-mm mortar and the second with a 81-mm mortar; and finally, the unarmored M548 tracked carrier. 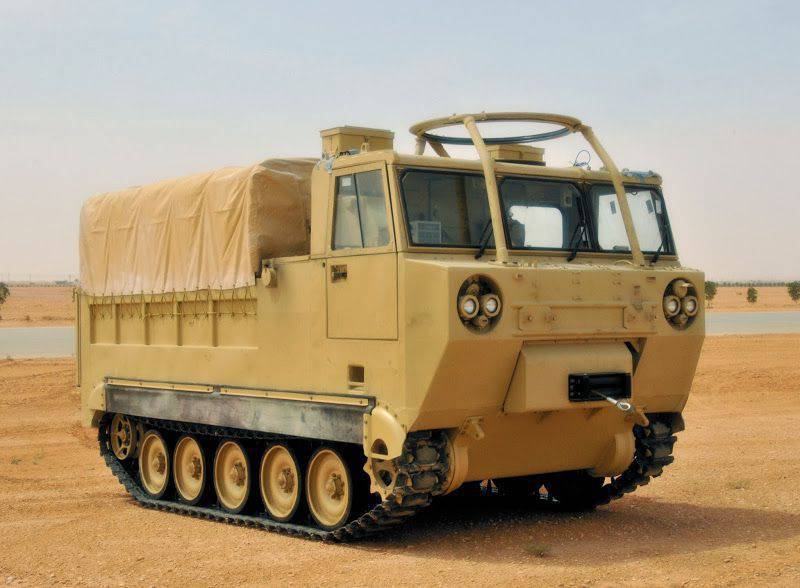 The former FMC Corporation (now BAE Systems) has manufactured more than 74000 machines of the M113 series, they need to add more machines from the Italian production line.

FNSS Savunma Sistemleri owns BAE Systems (49%) and Nurol (51%), which simplified the process of upgrading machines, since BAE Systems is the head company.

While other contractors offer retrofit packages for this machine, the Saudi retrofit is by far the most ambitious because it not only improves the performance of the machine, but also increases its service life at a reasonable cost.

We are in Yandex Zen
Rise of the Machines: Asia is modernizing its armored vehicles
Overview of armored transporters and infantry fighting vehicles (Part of 1)
7 comments
Information
Dear reader, to leave comments on the publication, you must to register.