23 September 2015
1
By the fall of 1915, the Russian maritime department, having studied the experience of the ground forces, began to show interest in armored vehicles. It was planned to use similar equipment to strengthen the garrisons of bases, escort transport columns, etc. September 2, 15th command fleet ordered the first armored cars. Until the end of next year, the marine department replenished its equipment fleet with two dozen new armored cars.


The first order of the naval command was received by the Putilov factory. The contract from 2 September 1915 of the year negotiated the construction and supply of 18 armored cars of the type “Harford Putilov”. Several dozen such vehicles were already built for the army, so that the production of a modified version of this equipment for the fleet was deployed by the end of the year. In the spring of 1916, the military department attracted the Izhora plant to the armored vehicles construction program. He was commissioned to create and build two cannon armored vehicles on the chassis of a commercial truck.

Two American-made Pierce-Arrow trucks were handed over to the Izhora plant for the construction of armored cars. Five-ton trucks should be equipped with armored hulls and weapons, after which they could perform new tasks. Plant engineers have already had experience in developing armored vehicles based on similar chassis. For this reason, creating a project did not take long. In addition, the use of existing experience was manifested in some features of the design of new armored vehicles. The armored cars on the base of the Pier-Arrow chassis turned out to be similar in appearance to the earlier Mannesmann-Mulag, Packard and "cars under a machine gun." 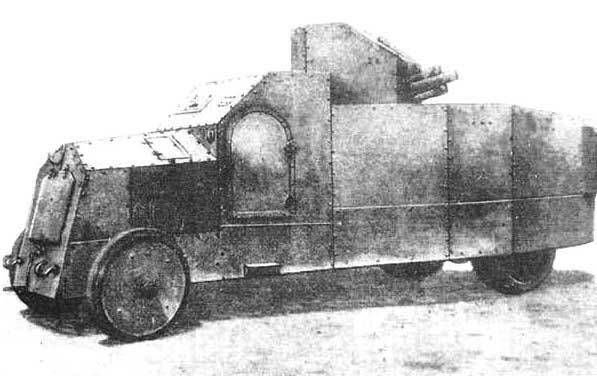 As before, the new project did not receive its original name. New armored cars decided to call for the name of the manufacturer of the base chassis - "Pierce-Arrow." Under this name, two built cars and remained in stories domestic armored vehicles.

As the basis for the naval department’s armored vehicles, American-made chassis were selected with a payload of 5 T order. A solid reserve of carrying capacity allowed the use of some new ideas aimed at increasing the level of protection and firepower. The chassis itself had a typical design with a rectangular frame, a gasoline engine in the front, and a mechanical transmission. The wheeled chassis with the formula 4х2 was equipped with two axles with suspension on leaf springs.

The general approach to the creation of armored vehicles "Pierce-Arrow" was standard for its time. All extra parts were removed from the trucks, leaving only the chassis, powerplant, etc. Instead, it was proposed to mount a new armored hull. The latter was assembled on the basis of a metal frame and equipped with armor sheets 4,5 mm thick. According to other data, thicker 9-mm sheets were used in the design of the case.

The Pier-Arrow armored vehicle hull was designed using already mastered ideas and layout solutions. The front engine compartment received a forward-inclined front leaf with a large hatch for ventilation. The hatch cover could rise and be fixed in this position. Before the battle, it should be closed. The engine compartment received vertical sides and a roof consisting of two side and one central sheet. In the sides and sides of the roof were provided four hatches for maintenance of the power plant. 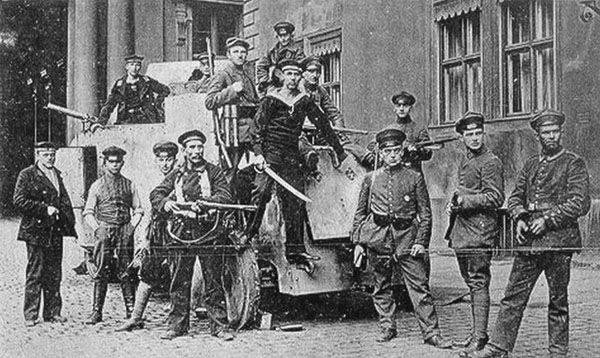 Armored car and fighters of one of the naval formations

Behind the engine compartment there was a fully protected control compartment, made in the form of a closed cabin. The design of this unit was attended by some of the features that gave it a resemblance to the armored vehicles "Mannesmann-Mulag" and "Packard". A vertical frontal leaf contacted the engine compartment, the upper corners of which rose above the bonnet roof. Above it was a sloping frontal sheet. On the right side of the inclined sheet there was a relatively large driver's viewing hatch with a lowered lid in which a gap was made. Another slot with a movable cover was on the left, in front of the workplace of the vehicle commander.

To increase the usable area and volume inside the armored hull, the cabin sides were positioned at an angle to the machine axis and diverged towards the stern. In the side plates were the doors for the driver and the commander, which opened back along the movement. A curious feature of the doors was their shape: rectangular at the bottom and semicircular at the top. From above, the control compartment was protected by a horizontal roof.

Following the pattern of previous cannon armored cars, the new Pirs-Arrow received a combat compartment, made in the form of an armored body. Instead of the original cargo area on the trucks offered to install a wooden "deck" with armored sides. Given the operating experience of the previous equipment of a similar design, the engineers of the Izhora plant decided to use high sides, reaching almost the level of the roof of the control compartment. In addition, the lower part of the sides covered the chassis units.

In addition to the overall design of the fighting compartment, the Packard armored car borrowed from the armored car. Their front plates diverged to the sides, and the back of the case was narrowed. Due to this, the central part of the “deck” was wider than the front and aft platforms, which simplified the operation of weapons. In addition, the extended part of the body allowed to close the rear wheels from the bullets and fragments. The front, however, had to be protected with metal discs. At the rear of the starboard, a hatch was provided for access to the fighting compartment. 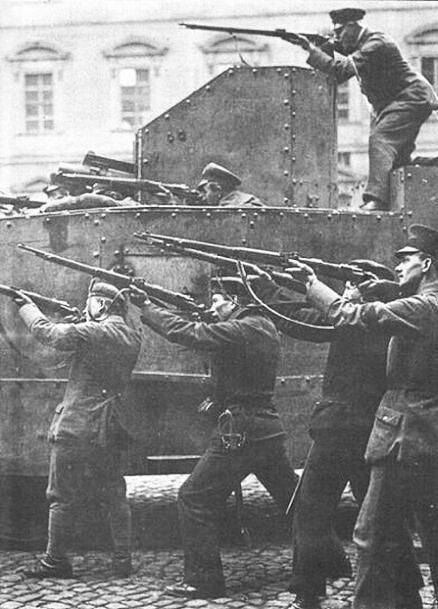 The stern of the fighting compartment was made in the form of a curved sheet with two convex sponsons at the corners. The latter were proposed to be used for the installation of additional weapons.

A characteristic feature of the gun armored cars of the Izhora plant was the installation of artillery pieces on the pedestal in the center of the open fighting compartment. Two cars "Pierce-Arrow" are no exception. In the center of the "deck" provided a rotary installation for the gun turret. In order to increase the level of defense of the gunners, the tower had a full reservation at the top. Access to it, apparently, was provided through a large hatch at the bottom of the feeding sheet.

The crew of the new armored car was supposed to consist of five to seven people. The commander and driver were located in a closed cabin, two or three gunners - in the tower. In addition, in the stern of the open area provided for space for two rifle-machine gunners.

The main weapon of the armored vehicles for the fleet was to be the 76-mm mountain gun of the 1904 model. This gun was mounted on a pedestal inside the swing turret. In the front sheet of the tower was provided with a hatch for the use of sighting devices. Ammunition of various types of shells was located in the layouts on the platform of the crew compartment. The design of the tower provided horizontal guidance within a fairly wide sector. Shooting forward through the cockpit was impossible. 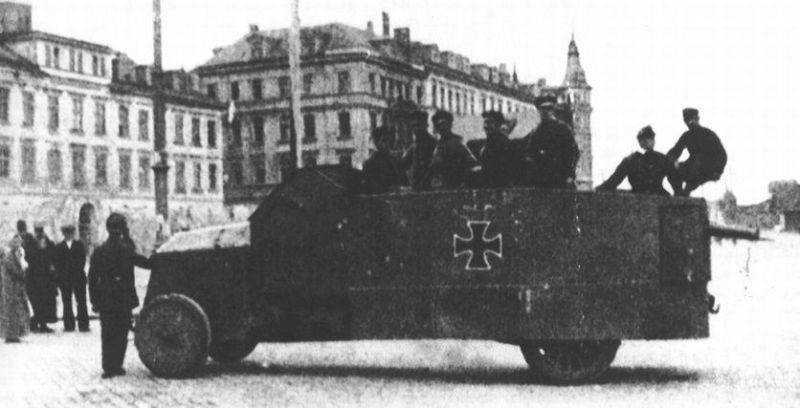 As an additional weapon, the armored cars received two Maxim machine guns each. This weapon was located in the stern sponsons and could fire at two relatively narrow and partially overlapping sectors. It was assumed that on the battlefield, new armored vehicles would go in reverse. The specific location of the weapon was connected with this particular application.

Two armored vehicles "Pierce-Arrow" with gun-machine guns were built in the fall of 1916. By the beginning of winter they were tested and handed over to the customer. It is noteworthy that the armored cars of the Izhora plant were completed and handed over to the naval department just before the Garford Putilovsky. Thus, it is the "Pierce-Arrow" can be considered the first domestic naval armored vehicles.

A faster completion of construction turned out to be the only noticeable success of the Izhora plant in the program of equipping the fleet with armored vehicles. After comparing the new fleet models, the fleet command decided to use two Pears-Arrow as a training vehicle. To take part in various operations were 18 armored cars "Harford Putilov." At the very end of 1916, two dozen armored cars were sent to the Baltic States to serve in the bases of the Navy.

The armored cars of the Putilov factory were transferred to the Armored Artillery Division of the land front of the Peter the Great Naval Fortress. As part of this unit, they later participated in battles with the enemy. Two "Pierce-Arrow", in turn, went to serve in the Marine reserve armored division. There it was planned to use them for the training of personnel.

The armored cars of the Izhora plant on the American chassis were used for training purposes before the start of the 1918 year. After that, taking advantage of the tense situation in Russia, the German troops launched an offensive and received a lot of trophies. Among other vehicles, one of the Pierce Arrow armored cars fell into the hands of the Germans. For one and a half years of operation, the machine developed a part of the resource and needed repair. Having studied the trophy, German specialists decided to restore it and use it in their troops. 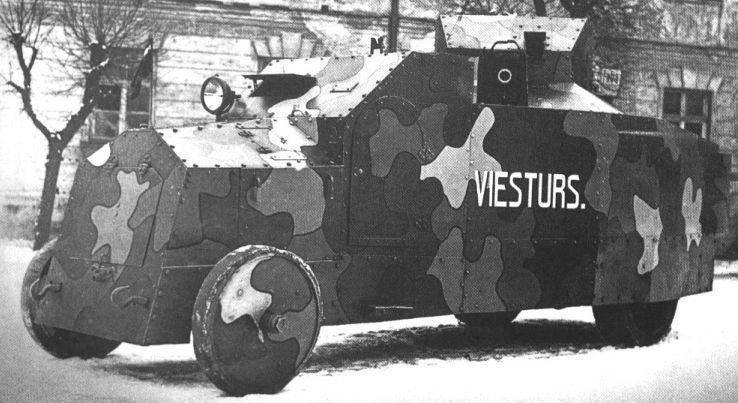 Armored car, got to the Latvian formations

Subsequently, the renovated Pierce-Arrow was incorporated into the Kokampf junction (Kommando der Kampfwagen), equipped with trophy equipment, including Russian-made. In Germany, the armored car received a new color and its own name - Titanic. Under this name it was exploited until the end of the decade. During the November Revolution, the 1918 of the year and the subsequent riots of the Titanic, along with other captured techniques of connecting Kokampf, were used to quell riots, patrol streets, etc.

The second armored car Pierce-Arrow during the offensive of the German troops was captured by Latvian armed forces. In addition, the Latvians managed to repel one "Harford Putilov" of the maritime version. Subsequently, "Pierce-Arrow" received camouflage coloring. In addition, the car gave their own name - Viesturs. Subsequently, the armored car was used by the newly formed Latvian army during the Civil War.

At the end of 1918, the German authorities began using captured armored vehicles, including the only Pierce Arrow called Titanic, to combat popular unrest. After the final suppression of the Spartacist Uprising in January of 19, this technique was used for some time as police cars. In the future, armored vehicles with a developed resource were written off. By the beginning of the twenties, they had developed their resource, and the repair was considered impossible or impractical. At the beginning of the new decade, all the trophies, including the only "Pierce-Arrow", were written off and dismantled.

The service of the Latvian armored car lasted a little longer. Due to the lack of the required number of armored vehicles, the army of the young state was forced to carefully monitor the available vehicles and continue their operation until the resource is fully developed and it is completely impossible to recover. Because of this, the Pier-Arrow armored car with the name Viesturs continued to serve until the mid-twenties. After that, due to the impossibility of further operation, the machine was also disposed of.